Forces of nature in the WNBA finals

The Seattle Storm vs. Washington Mystics game features two athletes full of character off the court. 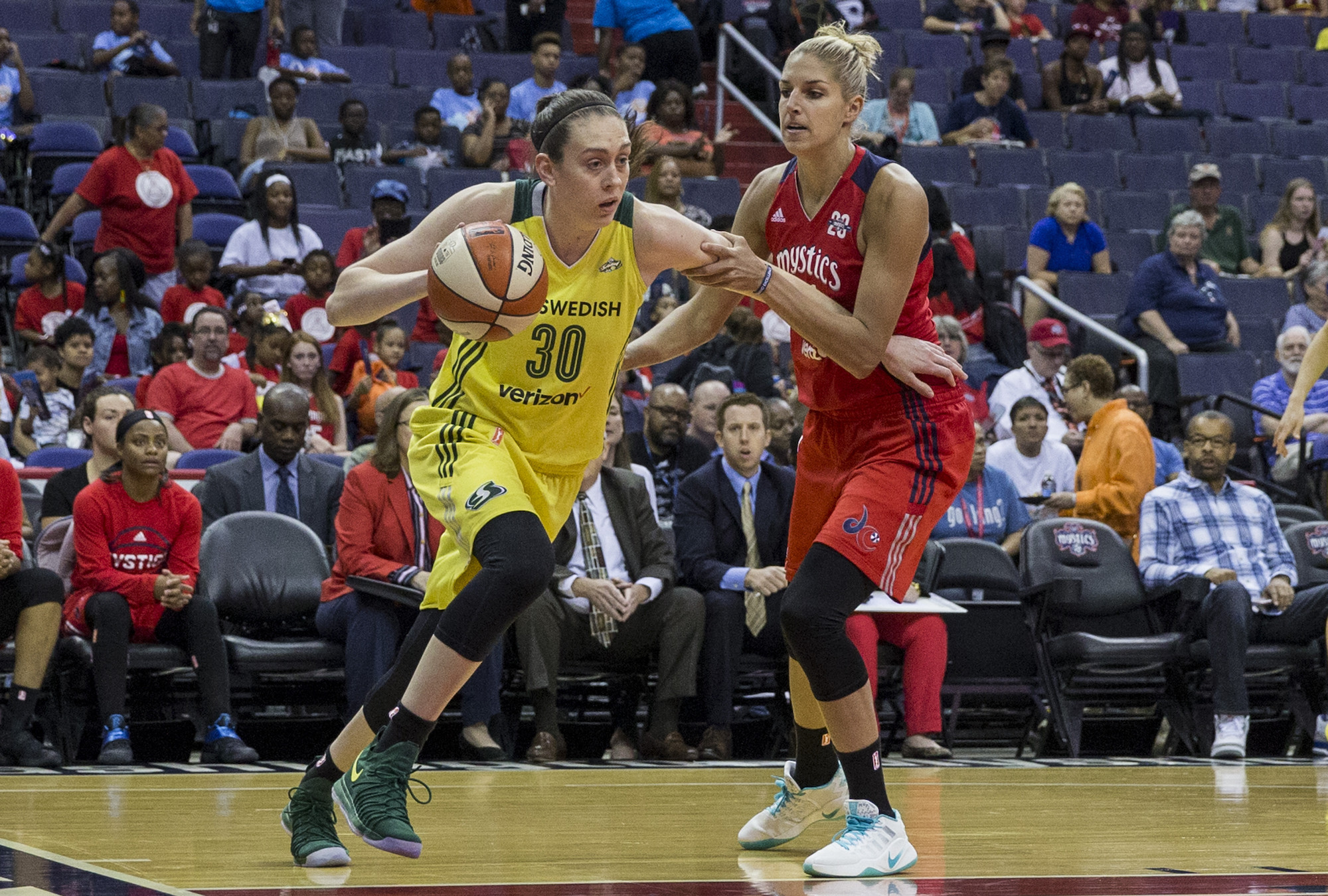 A story about Elena Delle Donne always comes in handy when speaking about character to a bunch of ambitious high-school girls’ basketball players.

A major challenge for the Seattle Storm tonight, Delle Donne was still playing prep basketball in her hometown of Wilmington, Delaware, when I came knocking. On a Sunday evening, we piled into SUVs and drove to a darkened gym. It was so chilly, you could see the wisps of our condensed breaths in the still air.

Yet, on a school night during the height of her high-school basketball season, and with countless neighbors huddled around fires or 60 Minutes, Elena Delle Donne powered through a strenuous basketball and conditioning workout with a trainer.

“This is how greatness is made,” I recently told the high-school girls at a camp operated at the University of Washington by Chris Hansen, a friend and former hoops colleague. Girls mature earlier than boys, so greatness, in women’s hoops, can often be spotted a decade away.

When Delle Donne’s Washington Mystics face the Storm in the upcoming best-of-five championship series, she will be up against Breanna Stewart, another player I followed after founding a national website called HoopGurlz that covered girls’ basketball and women’s college prospects. I eventually sold it to ESPN, where Hansen and I worked, running our old site. We attracted followers to HoopGurlz with recruiting and high-school news and rankings, then plied the audience with inspirational stories intended to empower girls and young women.

Few of the stories matched that of Delle Donne, our top-ranked prospect in 2008.

Stewart, the league’s reigning Most Valuable Player, was the last college prospect ranked No. 1 in the country by HoopGurlz before I left the site. She is another portrait in character.

Theirs will be cast as a clash of players unique to the women’s game: Stewart, at 6 feet 4, and Delle Donne, at 6-5, both wield basketball skill sets, including long-distance shooting, passing and ball handling, expected of players nearly half a foot shorter.

But I really see them both as forces of nature, two young women I’ve admired since their high school days for their abundant humanity. Both had to be pushed into the spotlight and, now in the public glare for good, use their stature to push for societal change.

I once compared Stewart to Maya Moore, our No. 1 prospect in 2007, by saying, “Maya would rip your heart out for a win, while Bre would just as soon soothe it, especially if you’re a teammate.” Having overheard the comment, a prominent college coach approached and said, “That’s exactly what all of us are talking about.”

Which is to say: If you have big heart, no matter how apparently soft, you can grow into winning because caring teammates are a winning combination, too. Moore, the ultimate cutthroat who has four WNBA titles, won two national championships at Connecticut, the greatest program in the sport’s history. Breanna Stewart, the big ol’ softy, won four at UConn, earning a Final Four MVP each year.

Stewart, 24, comes from such humble beginnings that her parents, Brian and Heather, initially declined an invitation for her to try out for the national team. They confided their doubts about her belonging in such an athletic stratosphere. After they changed their minds, Stewart not only made the team, she has become a centerpiece of the U.S. international program.

About a year ago, Stewart displayed the sort of courage that is built on the emotional maturity and generosity I remember. She wrote, “Me Too,” for the Players’ Tribune, a media outlet that gives voice to professional athletes. The piece helped fuel the #MeToo movement by detailing the sexual abuse she endured, between ages 9-11, while staying at a relative’s house. She eventually told her parents and the abuser confessed to police.

Delle Donne, 29, long has been conflicted about the hold basketball has had on her. The first time I talked to her in private, she confided that she wavered about her commitment to the sport. I was on vacation when I received a message from her mother, Joan, that Elena wanted to speak to me. During an emotional conversation, Elena Delle Donne said she was pulling out of her last summer of club basketball. That included relinquishing her spot on the USA Basketball junior national team. She said she was thinking seriously about quitting the sport altogether.

A year later, Delle Donne backed out of her scholarship agreement with Connecticut, enrolled at nearby Delaware, walked on as a volleyball player and led the Blue Hens to an NCAA tournament berth, then resumed her basketball career there the next season. The reason for all the turmoil was obvious the minute I met Delle Donne’s older sister, Elizabeth, or Lizzie. She was born deaf and blind and suffered from autism and cerebral palsy. People with such special needs require that the families circle the wagons around them. Delle Donne has been determined to stay in that loop.

Last year, the pull of family inspired Delle Donne to engineer a trade out of Chicago, with which she earned the league MVP in 2015. Washington, D.C., is just a 90-minute ride to Wilmington on Amtrak’s Acela Express. She wrote her own piece for Players’ Tribune, about Lizzie. She also is a global ambassador for the Special Olympics and, suffering from chronic Lyme disease herself, is the first national ambassador to the Lyme Research Alliance.

Just the other day, I received a welcomed text from my friend Hansen that he had found the floor seat left at another of his camps a year ago. More than supplying me with back support while photographing basketball, the thing has ample sentimental value: In its back pocket I have for years kept an old program I picked up from one of Delle Donne’s high-school games at Ursuline Academy in Delaware.

I swear that keepsake holds no sway over how I will root during the 2018 WNBA Finals. No matter which team prevails, I know I have for years backed two winners, wherever and however the score has been kept.