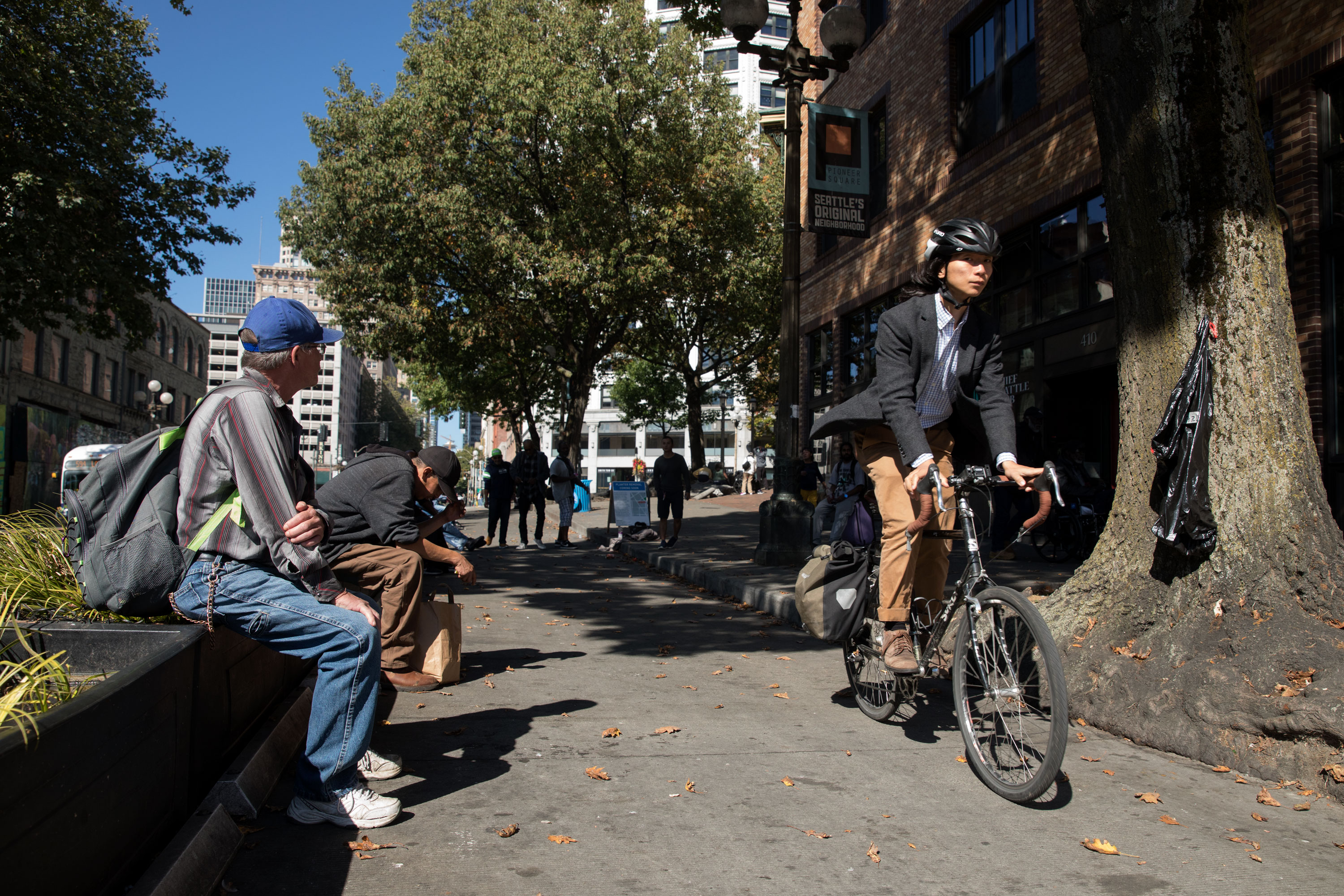 At the very south end of Seattle’s 2nd Avenue protected bike lane, two communities that have been demanding attention from city leaders in recent years will be getting some this weekend. But that attention, a solution to a dangerous situation, is leaving neither entirely satisfied.

In fall 2014, the Seattle Department of Transportation (SDOT) installed the first phase of a two-way bike lane between Pike and Yesler Streets — one of the city’s earliest efforts to offer more protection for cyclists than painting stripes on the street. Along most of that route, the bike lane was — and still is — separated from car traffic by short plastic posts called bollards. But last fall, when the bike lane was extended south to Washington Street and north to Denny Way, SDOT bulked up the barrier between bike and car, opting to use large planters for the job, in part because they look nicer and in part because they provide a more significant physical barrier between cyclists and drivers.

It turns out those planters also provide a great place to sit a spell.

The area around this southern terminus of the bike lane is the home to several homeless services. The front doors of the Chief Seattle Club empty onto the sidewalk adjacent the bike lane, while the Union Gospel Mission men’s shelter is located just one block south. Those waiting to access services have long congregated in front of the buildings and in the small park at the corner of 2nd and Yesler where there are a handful of benches to sit on. But since their installation last fall, the bike lane planters have proven to be a popular makeshift bench with people often lining it end to end. They cross back and forth from sidewalk to planter making the bike lane something of a human obstacle course. Every day, cyclists choose to forego the last block of the bike lane, merging into traffic at the intersection just north of this particular stretch.

In response to complaints from Pioneer Square organizations and some cyclists, SDOT announced last week it would remove the planters and replace them with plastic bollards. The move was met with anger from bike advocates who worried that the removal of the planters represented a lose-lose solution for cyclist safety and the homeless people who just want a place to sit in Pioneer Square. But at least one Pioneer Square homeless service provider celebrated the planned change.

On its face, it’s a minor development in a growing city where plans and reality do not always align. But for some advocates, the incident and its resolution have exposed larger questions of how Seattle’s public space is designed and for whom.

Colleen Echohawk, executive director of the Chief Seattle Club, a nonprofit that provides services for American Indian and Alaska Native people, said she originally was excited to see the addition of the bike lane and its planters because they added some beauty to the space and drew attention. But over time the negatives she’s seen — including near misses between cyclists and sitters — have outweighed the positives.

“I am 100 percent behind [the planters’] removal,” she said. “I agree that we need more public spaces for not just our homeless community but all of us. But those need to be spaces designed. The bike lane wasn’t designed for that. … This thing is just not safe ultimately.”

That’s SDOT’s stance as well. “With the safety challenge happening and some people on bikes moving out into the street we decided to replace the planters in the interim,” said SDOT spokesperson Dawn Schellenberg. This weekend, SDOT crews will remove the planters and install something called Tuff Curb which consists of a three-inch high plastic curb with rows of plastic bollards on top. It provides slightly more physical separation than the plastic bollards glued to the pavement elsewhere along 2nd Avenue, but much less so than the large, heavy planters.

“For many of us, whether we feel safe from vehicles is a big part of the decision to get on our bike or not,” said Cascade Bicycle Club policy manager Vicky Clarke. “It's common for bollards to get ripped out and not replaced, as cars drive over or hit them. To us, that means they're not a feasible long-term solution.”

Schellenberg said that SDOT is still considering other options as a permanent solution. Mark Ostrow, a board member with bike and pedestrian advocacy group Seattle Neighborhood Greenways, hopes Seattle finally takes cues from Europe and uses cement curbs with metal bollards to provide separation between bikes and cars. “I would really hope that this bike lane is something that is going to be there for the long haul and they could put in a real barrier.”

Ostrow isn’t only concerned about the cyclists. He also wants to see the city install more seating in the area.

Ostrow tried to do just that last Friday. After learning of SDOT’s plans to remove the planters, he purchased some metal folding chairs, wrote #LegalizeSitting on them in protest of the planter removal, and headed down to Pioneer Square to stage a literal sit-in and provide seating for people who might otherwise be using the planter as a bench. He said people used his chairs and he had some conversations with some of the sitters, but packed up after Echohawk asked him to. “I really liked the guy and he had good intentions,” she said. “But the consequence was a metal chair in the bike lane.”

Ostrow told Crosscut that SDOT’s approach to the planters illustrates a broader problem in Seattle. “It’s not just with places to sit, but public restrooms and public drinking fountains. Unless you’ve got money to buy something at a store or coffee shop it’s hard to get water or find a restroom in the city. … You can go to Vancouver and there are plenty of public amenities people can use. It’s humane and pleasant and makes the city a better place.”

This is an area where Ostrow and Echohawk share common ground. The Chief Seattle Club is building a new affordable housing development next door to their current location that will have a ground floor cafe and community space.

“We want to create space so you feel like that you belong in a community,” she said. “We struggle with that in our city. We have a homeless community that’s vibrant and beautiful, but we don’t have space for people to interact with each other. We want to create a third place where business people and commuters and a homeless person and a native person can all interact.”

SDOT might also add seating to the area if the agency gets funding for it and, “if through a planning and outreach effort outreach determines that we need it,” said Schellenberg.