Activists say detainees in Tacoma have been threatened with force-feeding. 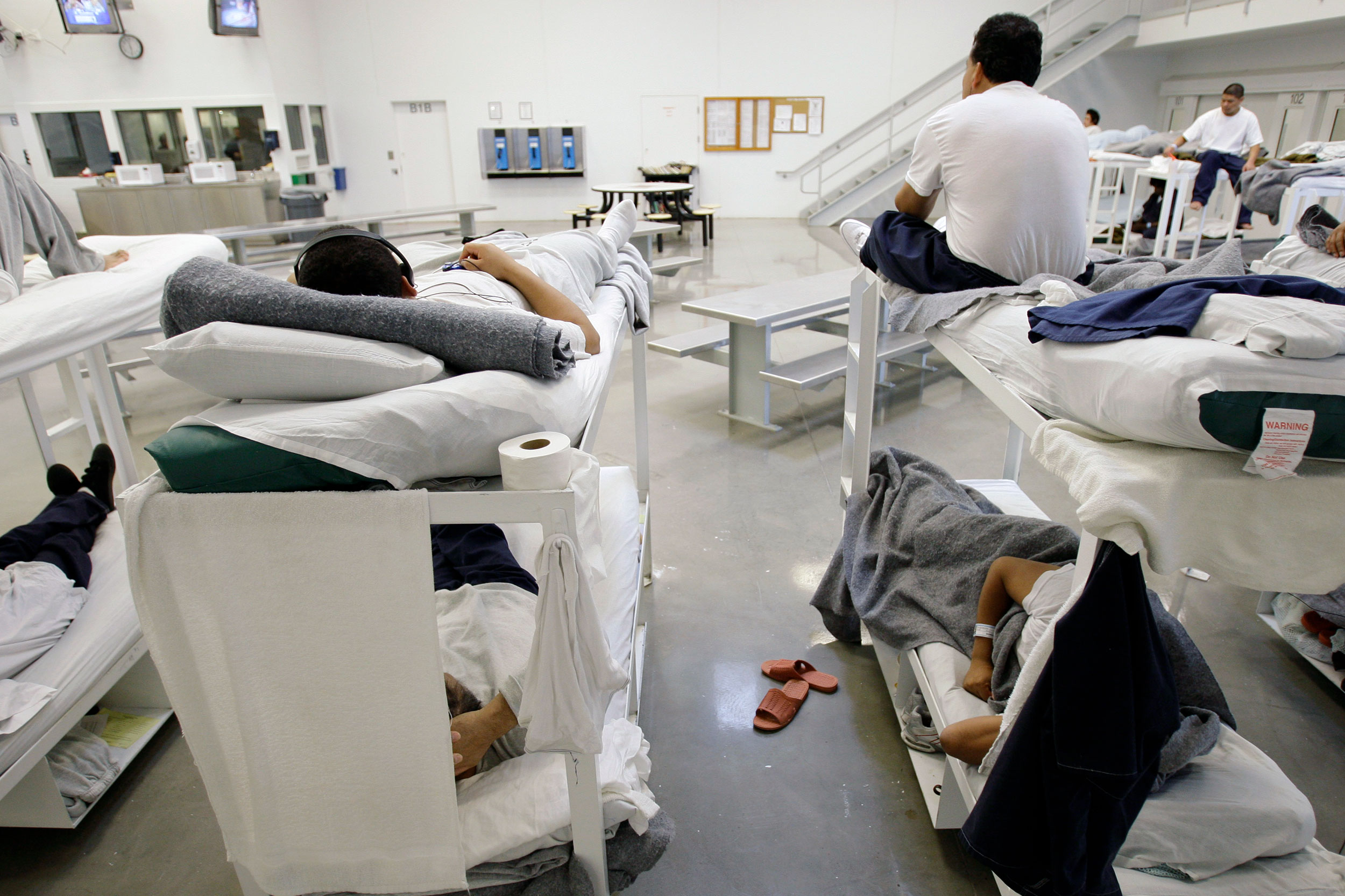 In this photo taken on Friday, Oct. 17, 2008, detainees are shown resting on bunks inside the "B" cell and bunk unit of the Northwest Detention Center in Tacoma. The facility is operated by The GEO Group Inc. under contract from U.S. Immigrations and Customs Enforcement, and houses people whose immigration status is in question or who are waiting for deportation or deportation hearings. (AP Photo/Ted S. Warren)

The American Civil Liberties Union of Washington sent a warning letter on Thursday to authorities after officers at the Northwest Detention Center in Tacoma allegedly threatened to get a court order to force-feed detainees on a hunger strike.

ACLU lawyer Enoka Herat sent the letter to the Northwest Detention Center (NWDC) warden and the U.S. Attorney of the Western District Annette L. Hayes. The letter reminds both that a court order should only be pursued after a medical authority “has determined that the detainee’s life or health is at risk.”

Seven NWDC detainees are currently on a hunger strike, according to Maru Mora Villalpando of the volunteer community group NWDC Resistance and Latino Advocacy, a nonprofit organization based in Bellingham.

Several of the detainees have been on the hunger strike for approximately two weeks, allegedly prompting detention officials to threaten detainees with force-feeding, Villalpando said.

This is the third hunger strike in 2018 alone. Since 2014 there have been nearly 15 hunger strikes at NWDC, according to the group NWDC Resistance.

Crosscut could not immediately reach GEO Group, the private company that operates the detention center, for comment. But the company has previously denied retaliating against inmates, saying it “has a longstanding record providing high quality, culturally responsive services in a safe, secure, and humane environment that meets the needs of the residents in the custody and care of federal immigration authorities.”

In a statement, the U.S. Immigration and Customs Enforcement, or ICE, said it "takes the health, safety and welfare of those in our care very seriously and respects the rights of all people to voice their opinion without interference."

"ICE does not retaliate in any way against hunger strikers. ICE also explains the negative health effects of not eating to its detainees. Additionally, for their health and safety, ICE closely monitors the food and water intake of those detainees identified as being on a hunger strike."

The office of Hayes, the U.S. Attorney, confirmed she had received the letter but would not comment further.

The detainees are on strike as part of the 2018 national prison strike, which began on August 21 and ends on Sunday, September 9. The national strike aims to call attention to poor prison conditions and what some view as exploitative labor practices in U.S. correctional facilities.

Last year, Washington state Attorney General Bob Ferguson sued GEO Group for violating the state's minimum wage law. The company is said to pay detainees $1 per day or, in some instances, with snacks and extra food.

Villalpando said detainees at the NWDC are also concerned about the behavior of a new warden at the facility. According to detainees, the warden insists they stand whenever he enters a room or an area where the prisoners reside.

Villalpando said one detainee told her that the warden "thinks he is running a boot camp or we are in the military" and that some inmates are not able to get up from their bed due to illnesses.

Officials have allegedly threatened detainees with force-feeding before, though it is uncommon for a judge to grant the required order to make such an action legal.

Emily Chiang, legal director of the ACLU-WA, said one of the last times such an order was granted was in the 2004 case of inmate Charles Robert McNabb. McNabb tried to starve himself out of remorse for a 2003 fire he started in Spokane. That fire seriously burned his stepdaughter. While he awaited trial, McNabb lost “at least half of his 190 pounds,” according to news reports.

McNabb later sued the Washington State Department Office of Corrections over its force-feeding policy but lost in the end.

On Saturday, demonstrators are planning to hold a rally at the NWDC in support of those on the hunger strike and to demand a stop to the alleged retaliation.