Last spring, locals discovered the disfigured body of 26-year-old Katherine Cunningham on rural Camano Island. Investigators think they know who killed her, but he’s nowhere to be found. 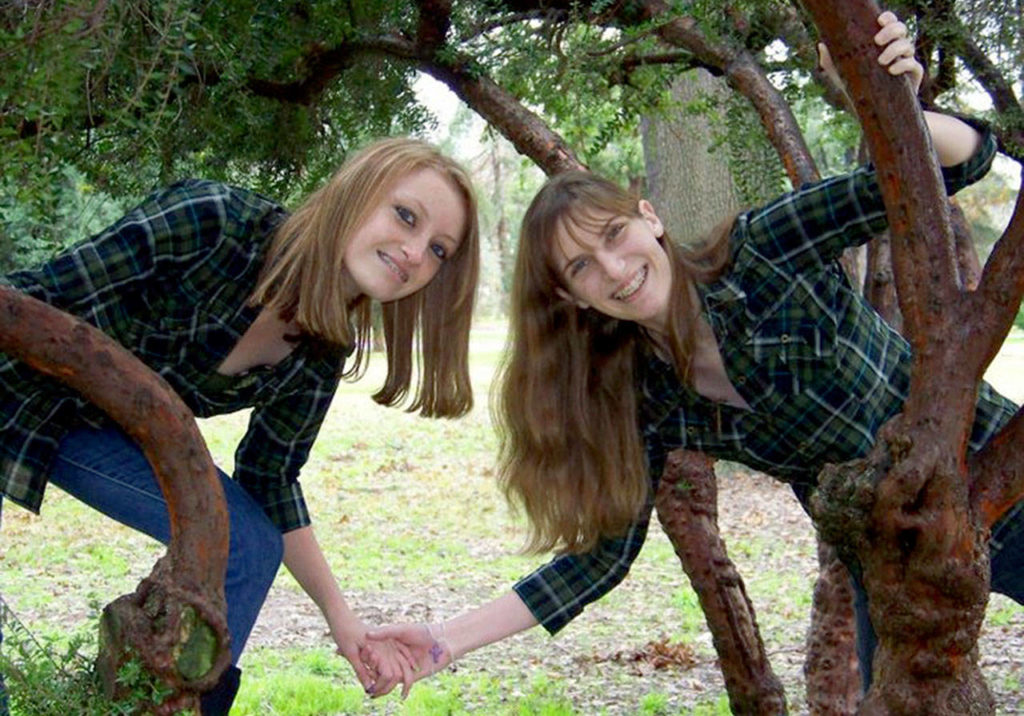 Greg Banks moved to pastoral Island County in 1993, long after the area’s first recorded beheading. The victim was the local settlement leader, Col. Isaac Ebey. He was shot and decapitated in August 1857 by invading Tlingit warriors from Alaska in retribution for the slaying of their chief and two dozen tribal members in an earlier battle with a U.S. Navy warship at Port Gamble.

There may have been similar violent slayings in the century-and-a-half since. But not in the county’s modern days, says Banks, the local prosecutor.

“I was not aware of any homicides involving beheadings in Island County — certainly not in my 25 years living here,” he says.

Now he’s aware of one: that of 26-year-old Katherine Elizabeth Cunningham, whose body was discovered here last spring.

Her remains, wrapped inside a sleeping bag, covered with a tarp and dumped onto a kid’s Red Flyer wagon, were found by a neighbor on Camano Island, a vacation, residential and farming community about an hour's drive north of Seattle.

Seven months later, Cunningham’s alleged killer is still on the loose. If he’s caught, the county is asking that he be held in lieu of $1 million bail. But by the time Cunningham’s body was found, he had a big head start, and, considered armed and dangerous, god knows where he might be today.

On March 3, Robert Johnson and a couple of companions were inspecting a piece of land they hoped to buy, a 10-acre parcel off East Tamarack Lane at the southern tip of Camano island. When they spotted the wagon and then saw the clumped-up sleeping bag, they looked inside. Someone quickly dialed 911. A stream of deputies and first responders soon began flowing into the crime scene.

Detectives would later determine that Cunningham, who was slender with long brown hair and a wide, friendly smile, was living on the property with a boyfriend. The couple, both from Merced County, Calif, had leased the site to store some property, then moved into a rundown, white,15-foot motor home on the property. About 70 feet from the body, investigators found another living space, a bunker cut into the hillside, accessible only by ladder descending into an entry hole.

After obtaining a search warrant, investigators found a stash of fully loaded weapons inside: two bolt-action rifles, a semi-automatic .22 caliber rifle with an altered stock, a camouflaged pump-action shotgun, and more than a thousand rounds of ammunition. In the motor home, they discovered a loaded 9mm pistol stuffed in a man's hiking boot.

Cunningham owned two old Hondas. One was parked nearby. The other was missing. So was her boyfriend, Jacob Gonzales, 33.

The missing car, it turned out, had already been found abandoned more than two weeks earlier, left in the snow on a steep grade outside Yreka, Calif., 600 miles away. In the trunk, police found a bloody samurai sword.

DNA tests showed the blood on the blade was Cunningham’s. On the sword’s hilt, investigators found a match to the boyfriend’s DNA.

Island County sheriff’s investigators, with help from the county coroner, determined Cunningham was actually killed February 15, more than two weeks before her body was found. By the time they started their hunt, Gonzales, if involved, could have been on the run for 16 days.

When news of Cunningham’s violent death reached Merced, friends and relatives were stunned. Cunningham, whose friends called her Kay, was described as a bubbly, upbeat and caring person. “She wasn't only my first child,” said her father, Paul Cunningham. “I actually hand-delivered her that day. So it's tough.”

In her obituary, her family wrote that “Katherine was a fun loving person who enjoyed caring for others and animals. In high school she ran cross country and met many good friends. She is truly loved and will be deeply missed by everyone.”

Cunningham and Gonzales met while serving in the Air Force in California. When they came to Washington around 2015, they briefly lived with a friend in Stanwood, eventually moving to Camano. Gonzales worked in the fishing industry. Cunningham, a certified nursing assistant, helped tend the elderly at the Josephine Sunset Home for assisted living in Stanwood.

Members of Cunningham’s family have told interviewers that Gonzales wasn’t a good match for her, and they were wary of him. One relative said she liked Gonzales best when he wasn’t around. Island County investigators are not yet saying what, if anything, they’ve learned about a possible motive, or whether the couple had an ongoing domestic dispute that went ballistic.

Several acquaintances told reporters they were shocked to think Gonzales was capable of such a murder. But he does have a criminal record. He was convicted in 2014 of exhibiting gross negligence after shooting a gun at his Los Banos, Calif., home. A police SWAT team, responding to a shots-fired call, saw muzzle flashes in the home and assumed Gonzales was shooting at them, The Los Banos Enterprise reported. He was arrested as he left the house, and later convicted, given a 13-day sentence and prohibited from owning a gun.

Gonzales has also been convicted of car theft, a felony, which further restricted his gun rights. Prosecutor Banks said he initially was pursuing violations of those restrictions as a reason to find and arrest Gonzales. In June, following the DNA findings, Banks amended the charges to include second-degree murder.

Although the sheriff’s department has been reluctant to release most details of the investigation, an affidavit from Island County Detective C.E. Wallace Jr., filed with the new charges, states that investigators have been able to access a laptop computer and two cell phones found at the East Tamarack site.

“The user-generated activity on all three devices stops on [or] about February 15, 2018,” Wallace notes — the date Cunningham is thought to have been killed.

The Island County Sheriff’s Department issued an all-points arrest warrant for Gonzales that came with $1 million bail. A seasonal worker with little to his name, Gonzales is “very unlikely”  to post it, a detective says.

Authorities suggest Gonzales might be in Los Banos, his hometown near Merced in California’s San Joaquin Valley, not far from where Cunningham grew up. He might also be in Las Vegas, where he has been known to spend long sessions at the slot machines and crap tables. Or he could have simply left the country.

Officials suspect Gonzales changed his appearance, perhaps shaving off his droopy mustache and long black hair — somewhat in vain: The 5’ 9”, 150-pound suspect can be seen both shaved and unshaved in photos still publicly accessible on his Facebook page.

The page also prominently displays an apparent motorcycle club patch bearing a cross with the words “Jesus Has My Back.”

“At this time we have no new information on the whereabouts of Jacob Gonzales. We just hope that someone sees him at the right time and turns him in,” a family spokesperson told Crosscut in an email. “Our whole family is hurt by what has happened to Katherine, but we are all trying to put our personal feelings aside until Katherine gets justice. I believe we are all still in some amount of shock. It’s just so unreal to believe.”

Around Island County, locals expressed fear in newspaper comments and radio and TV interviews that Gonzales could still be close by, and worried that their idyllic island life was slipping away.

Still fresh in many minds was the saga of  Peggy Sue Thomas, a murder tale that attracted Dateline, 48 Hours and other TV news magazines and led to a book, Practice to Deceive, by the late Ann Rule. In 2011, the former Ms. Washington and national beauty queen from Whidbey Island, once married to an oil tycoon who owned a Kentucky Derby-winning thoroughbred, made headlines after allegedly hiring a hit man to kill a friend’s husband on the island.

The gunman, Jim Huden, lead guitarist in a band called Buck Naked And The Xhibitionists, lured Russell Douglas, 32, to an isolated spot and shot him between the eyes. But Huden refused to name Thomas as a co-conspirator, and she got a plea-bargained four years for rendering criminal assistance. Thomas, 53, was released from prison in 2016, while Huden, 61, is doing 80 years.

Island County officials have dealt with other memorable crimes as well, including Colton Harris-Moore, the “Barefoot Bandit” who grew up on Camano where, by age 10, he committed the first of a prolific string of crimes that ranged from stealing food to stealing airplanes, until nabbed in the Bahamas a decade later, in 2010. In 1984, Robert Mathews made world headlines when the neo-Nazi terrorist and leader of The Order, a white supremacist group, was killed at his Whidbey home during a shootout with 75 federal agents.

“Any violent homicide is unsettling to the community,” says Banks, who personally prosecutes all major crimes in the county. “More importantly, the violence and gratuitous defiling of Ms. Cunningham’s body is devastating to the victim’s surviving family and friends.”

In August, a half year after the slaying, Cunningham’s family and supporters held a candlelight vigil at her gravesite in Merced. Her headstone includes a graphic of a happy dog. A Go Fund Me page has taken in $4,251 to pay for funeral and family travel expenses, and a Facebook page overseen by Katherine’s sister and mother provides the latest news about the manhunt. They grieve, but there’s not much more they can do.

“Waiting,” Katherine’s sister Emma told a reporter at the vigil, “That's the most frustrating part.

Correction: A previous version of this story stated that Col. Isaac Ebey was killed by Haida warriors from British Columbia. It is widely accepted to have been Tlingit from Alaska.