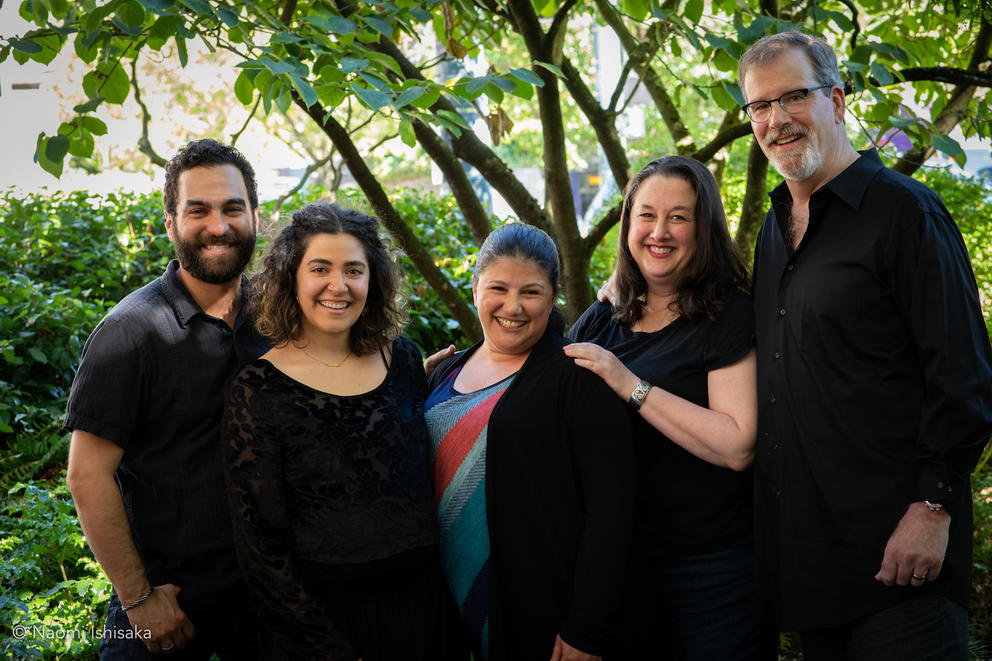 “It moves quickly, touches on a number of important subjects, makes people laugh and then think about it later. It’s all I can hope for in a 90-minute comedy.”

So says Karen Zacarías, about her play “Native Gardens.”  The bristling one-act depicts a culture-clashing feud between two neighboring couples — one White and older, the other Latinix and younger. As tempers rise, a friendly disagreement escalates into a pitched border war.

Though “Native Gardens” has introduced many theaters and audiences to her work for the first time, the Washington D.C.-based Mexican-American Zacarías has been steadily crafting socially-attuned plays — and gathering awards and grants and productions — for a good long while now.

Her scripts range from a splashy spoof of the wildly popular, Latin America-spawned, Spanish-language “telenovela” soap operas (“Destiny of Desire,” mounted at Oregon Shakespeare Festival this year); to a study of teenaged Dreamers (children of undocumented U.S. immigrants) living in Denver (“Just Like Us”); to a musical for young people about the boyhood of physicist Albert Einstein (“Einstein is a Dummy”).

In 2016, Seattle’s Latino Theatre Projects presented an earlier Zacarías drama here: “Mariela in the Desert” (which Zacarías toiled on at Hedgebrook, the Whidbey Island writing retreat for women). It focuses on an aged couple who have devoted their lives to a running an artists’ colony in Mexico — an homage, in part, to the playwright’s filmmaker grandfather and her grandmother.

But there’s a lot more catching up to do with the Zacarías oeuvre. And it stands to reason that “Native Gardens” (which some 15 theaters from Vermont to San Diego have picked up for production) will restart that process here. From her D.C. home, just after seeing her three adolescent children off to their first day of school, Zacarías chatted amiably and with passion about the play, as well as stereotypes of Mexicans and her own maturation as a socially-conscious dramatist.

Here are excerpts from our conversation:

The Latinx characters in “Native Gardens” are middle-class professionals, one from South America and the other a Mexican-American. Tell me about your own background.

I was born in Mexico and moved to the U.S. when I was 10. We went to Boston because my father was getting a master’s degree at Harvard. Later he became an epidemiologist and became interested in why gay men in Haiti were getting this mysterious disease. That’s how he got into AIDS research.

Have you encountered people who have images of Mexican immigrants that don’t fit the actuality of your family?

Definitely. They are shocked to know we went to university, that Mexican people go to the opera and are culturally sophisticated. It’s a very simplistic picture that’s painted of Mexico when it’s really a big and complex country. There is an educated middle class and we were part of that.

When you went to college, were you aiming to be a playwright?

I went to Stanford University as an international relations major. But I always wanted to be a writer, I always wrote short stories and poems. After I left Stanford, I worked in Latin American policy, focusing on democracy issues and voting rights in places like Nicaragua, Guatemala… And I wrote plays at night.

What made you turn to writing for theater fulltime?

I see playwriting as a way of giving people a voice. I had learned a lot about conflict resolution and dialogue building in my international relations work. And I thought, Wow! A play can be such an essential tool to talk about really essential things. I took all that I learned about coalition building and applied it to a theater company I founded, the Young Playwrights Theatre in D.C., which is still running. Young people wrote the plays and adults performed them.

Since getting a master’s in playwriting from Brown University, you’ve been very prolific and unusually versatile – writing comedies, dramas, plays for all ages.

I have three kids, and I love writing for young audiences. But I never wanted to be boxed in.

How did you come up with the idea of “Native Gardens”? What did you want to say with it?

I think it tackles the polemical divide going on in our country in an approachable and comedic way.  It’s about two couples who are well-meaning but differ in taste and culture, and they have a fight about a property line and things get progressively worse. One of the two women has a big garden and really cares about her yard. And the other cares about her yard but is really into native plants. I thought it was interesting to analyze this kind of disagreement. Nobody’s wrong and nobody’s right.  The play asks what does it take to be a good friend, a good neighbor?

I also think the play tackles class in a way that audiences aren’t used to. The wealthiest person on that stage is a young Chilean immigrant who has gone to boarding school. ”

The characters seem so benign at first, so accommodating of each other.

You watch the situation evolve and evolve and evolve. You really don’t know how fired up people can get about ferns! There’s always something absurd and primal about these neighborhood fights. I mean, Sen. Rand Paul got the bejesus kicked out of him by a neighbor over a lawn disagreement!

Even though there’s no real discussion of the political scene, do you see the play as a political statement?

The play is about what’s going on in our country [politically] but there’s also a sense of hope and lightness. And for me, it was an exercise in writing about things like sexism, racism and ageism, all through the metaphor of plants. You wouldn’t know how a hydrangea could have so much baggage!

I also think the play tackles class in a way that audiences aren’t used to. The wealthiest person on that stage is a young Chilean immigrant who has gone to boarding school. And the white woman is actually from a working-class Polish family in Buffalo. So it plays with our misconceptions, and not everything is what it seems. Where people have come from and where they expect to land is different for all four characters.

Few Latinx dramatists have broken through on the mainstream regional theater scene the way you have, but we are beginning to see more of the work of such playwrights as Tanya Saracho, Quiara Alegría Hudes… Why do you think that’s important?

What are you working on now?

I have a commission from Oregon Shakespeare Festival for a drama about an incident in Arizona in 1904 that was considered the trial of the century…its super relevant now because it’s about child separation, the idea of work equity and race. It has all this stuff that’s going on now, but also 110 years ago. It’s sad and interesting to see we’ve been through things like before —  and we’ve lived through them.

Will you be able to come to Seattle to catch Intiman’s version of “Native Gardens”?

No, but I’m excited because I have a cousin, Marela Zacarías , my closest cousin, and she just got a commission to do all the artwork for the Sea-Tac International Airport’s new air terminal. She’s going to see the show and represent me there.