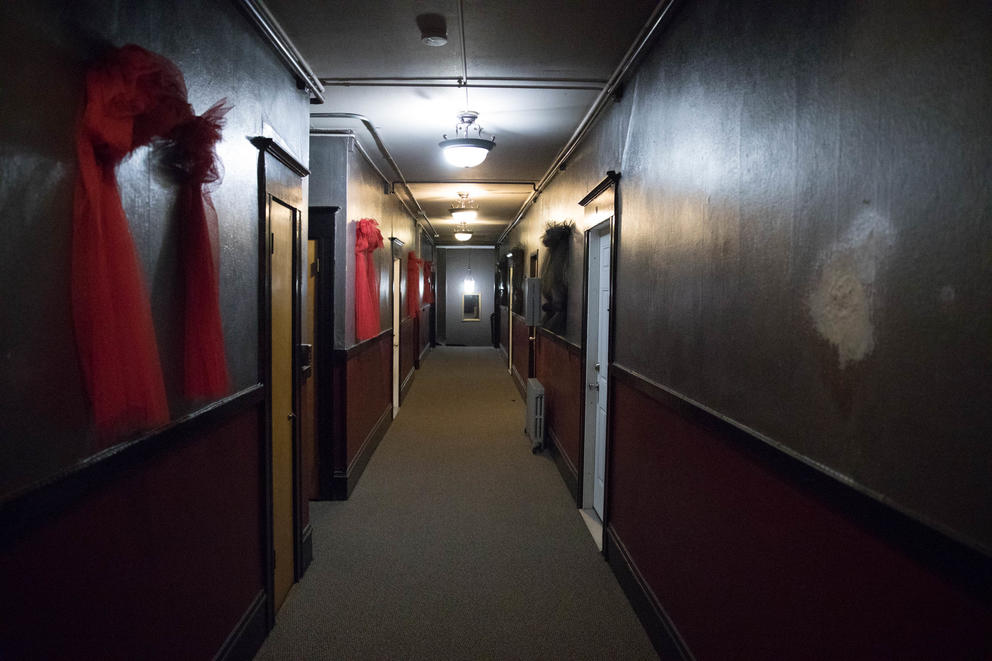 Hallways of an apartment building on Capitol Hill. (Photo by Matt M. McKnight/Crosscut)

Sarah Stewart has lived in Seattle for more than two and a half decades. She recently became homeless. Stewart has a degenerative illness and deals with chronic pain and fatigue that limit her ability to work. Last year, she was struggling to stay on top of her rent payments, which ultimately led to her eviction.

“In the end the landlord had all the power and not only were they able to evict me, but they also burdened me with more than $2,000 in late fees, attorney fees, and other non-rent fees,” Stewart said at a press conference at Seattle City Hall today. “Given my current situation, there is no way I will ever be able to pay that back.”

Stewart still works when she can and now sleeps in her car, on friends’ couches and floors, or wherever else she can find a place.

In a hefty report compiled by the Seattle Women’s Commission and the Housing Justice Project, a team of researchers and housing advocates combed through more than 1,200 unlawful detainer cases — the legal path to forcing an eviction — filed against nearly 1,500 tenants.

The commission and the King County Bar Association’s Housing Justice Project also conducted a survey with 72 tenants seeking services at the HJP office from March to May 2018.

While many of the findings feel intuitive –- unpaid rent is the leading cause of eviction, people of color are likelier to be evicted, eviction often leads to homelessness –- seeing the breadth of cases in one place offers a clear look into who is struggling most in Seattle’s cutthroat housing market and what happens to a tenant once they end up in eviction proceedings.

But you might imagine that something as serious as being evicted from one’s home would come after months of rent went unpaid, serious damage was inflicted to the apartment or something equally grave. In Seattle, however, owing the landlord just $10 is enough to wind up in eviction court – as was the case for one tenant in 2017. Another 20 tenants last year were taken to court over $100 of back rent owed.

It is worth noting that these cases capture official evictions, but that legal definition doesn’t account for tenants who moved out to avoid having an eviction on their record, tenants pushed out by a prohibitive rise in rent, or other situations that may not technically qualify as an eviction but nevertheless result in a renter needing to leave.

More than 5 out of every 6 evictions surveyed — 86.5 percent — were the result of nonpayment of rent. More than half the evicted tenants blamed losing a job, while many others blamed the increasing cost of housing. The report explains that, “high rent burdens reduce the financial flexibility of tenants, exacerbating the consequences of life’s emergencies.” For the past several years, Seattle has seen some of the fastest cost-of-living increases of any American city.

The court filings showed the role of relatively small amounts of money owed in leading to evictions. Of the cases analyzed, the median owed rent was just $1,200. Fully 75 percent of the tenants owed less than $2,500, and 52 percent owed less than one month’s rent.

But once the eviction proceedings commence, costs can quickly rise, as was the case with Stewart. Attorney’s fees and court costs are almost always passed on to the tenant, the report found, which added an extra 33 percent onto what tenants already owed.

In terms of disproportionality in general, over half of tenants — 51.2 percent — were people of color, compared to just 30 percent of Seattle’s total population. Nearly one-third — 31 percent — of evictions were of Black tenants, despite the city’s population being just 7 percent Black.

The disproportionality can be explained in part by broader inequities: Communities of color generally have higher rates of poverty in Seattle and across the U.S. But that’s not the whole picture.

“I want to talk about progressive Seattle,” said Seattle Women’s Commission member Tana Yasu at today’s press conference. “Blacks are getting evicted but quick. We represent the lowest numbers in population but the highest percentage getting evicted. You call that progress? I don’t.”

The effects of an eviction can be devastating and often lead to homelessness.

A mere 12.5 percent of evicted tenants moved directly to another permanent home, while a staggering 37.5 percent ended up living on the streets. Another 25 percent moved into shelter or transitional housing and an additional 25 percent moved in with family or friends. Four out of 5 reported being denied new housing as a result of their past evictions.

For children, the impact can throw off development. Of surveyed tenants, 85 percent said they had to move schools after eviction, with 87 percent saying their children’s performance in school suffered “very much.”

So what’s to be done? The obvious answer is to build more affordable housing where low-income residents aren’t one life emergency away from being unable to pay their rent.

Seattle has a goal of building 20,000 additional units of affordable housing by 2025. But that will take time and alone won’t solve the problem. The authors suggest a number of tools — many of which are already in place in New York, San Francisco and other cities — to strengthen tenants’ rights.

One idea is to require landlords to offer payment plans to avoid eviction for a month’s delinquency. According to the report, only 181 of the 1,218 cases filed in Seattle in 2017 were resolved by a payment plan to allow the tenant to stay in their home.

The authors want to see Seattle increase the subsidies available to cover missed rents as well. The city does have payment-assistance programs for households facing eviction, but housing case managers interviewed for the report said accessing them requires navigating a “labyrinth social services system spread amongst more than two dozen providers.” In the Bronx, low-income households with children facing eviction can receive subsidies through a safety-net program called the Family Homelessness and Eviction Prevention Program. New York’s Human Resources Administration also provides assistance for households without children facing eviction and has offices within the city’s housing courts, something with clear benefits in eviction cases.

Lawyers with the Housing Justice Project volunteer to provide free legal assistance to low-income residents facing eviction, but the project is limited compared to the legal representation other cities are providing.

Finally, the authors want to see the city and state implement policies that strengthen tenants’ rights in the first place. Among others, they want policies that make it harder to evict tenants over minor offenses (such as small amounts owed and minor property damage).

Seattle does have a “just cause eviction ordinance,” but the authors say it has loopholes that need to be closed to make it truly effective.

Edmund Witter, Housing Justice Project managing attorney, said Thursday that giving judges more latitude to not evict tenants would be an important step. According to Witter, state law in Washington gives judges little choice but to evict in circumstances where other states such as Ohio and New York provide more judicial discretion to decide if eviction is the appropriate remedy or if there’s an option where the landlord can receive their money without removing the tenant (such as a payment plan).

“How did we get to the point that tenants are losing everything over $15.67?” Witter asked, referring to a recent case he’d worked where a tenant was evicted for that amount. “We have to restore reason and sanity.”

A year into the pandemic, local Asian activists work to protect and help community members fearing for safety and facing economic strain.