Showbox owner strikes back with lawsuit

The owners of the property housing the Showbox music venue want more than $40 million in damages from the City if the venue is saved. 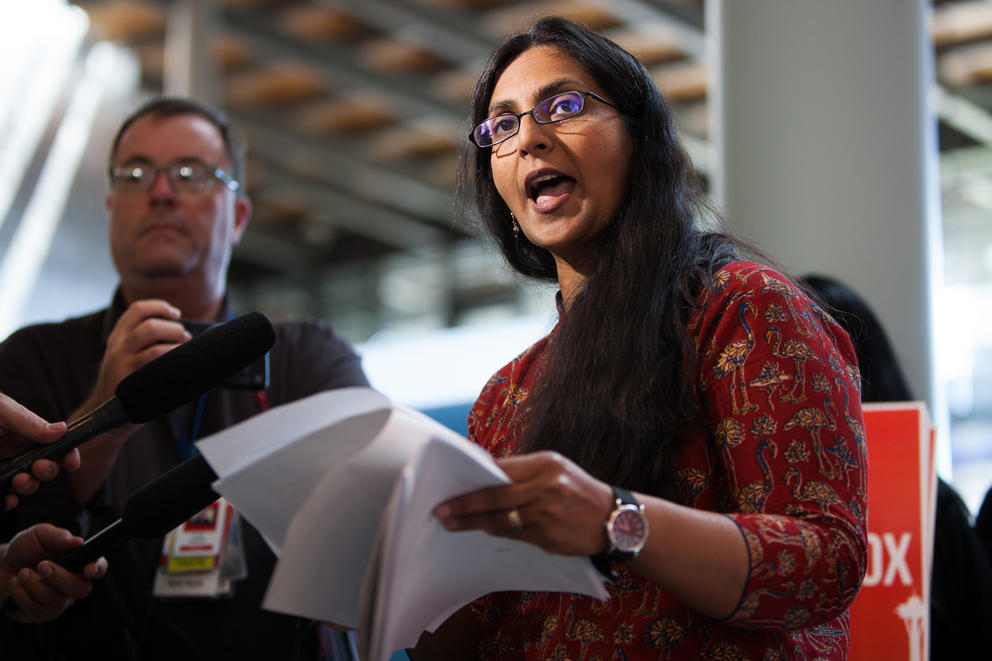 Councilmember Kshama Sawant speaks to press during a rally to protest proposed development at the site of the Showbox Market on Wednesday, Aug. 1, 2018, at Seattle City Hall. (Photo by Jovelle Tamayo for Crosscut)

The owner of the property housing the Showbox music venue is suing the City of Seattle, alleging the City Council’s efforts to “Save the Showbox” amount to an illegal zoning change and taking of private property. If the council's actions are not turned back, the owner wants more than $40 million in damages — the amount it contends it will lose if the 79-year-old music venue is in fact “saved.”

"The City Council, to enhance its political popularity, enacted an unlawful ordinance that was intended to, and did, place all the burden of providing a public music venue to City residents onto the shoulders of a private landowner," reads the lawsuit.

Additionally, the owners allege the process was stacked against them — contrasting the speed with which it moved through the city council with past zoning changes, that came with extended periods of public comment. Among other allegations, the suit also says that some council members should have recused themselves for the vote because they were “biased.”

“The City’s conduct was not consistent with the procedures for considering a rezone of a property,” reads the suit.

The lawsuit was filed Friday, just before the start of the holiday weekend, in King County Superior Court. In addition to the $40 million in damages, the plaintiff, an LLC under the control of Roger Forbes which owns the property as well as a nearby strip club, Deja Vu Showgirls, want their legal fees reimbursed as well as additional damages to be determined in a jury trial if the council’s ordinance is not rolled back.

News broke in June that a company from British Columbia was planning to purchase the site of the Showbox and build a 44-story high rise, prompting emotional backlash from a slew of local, national and international musicians.

Last month, the Seattle City Council decided to preempt the proposed development by expanding the boundaries of the Pike Place Market Historic District to include the site of the threatened music venue. The new, historical designation of the land meant the Pike Place Market Historic Commission would have to approve of any changes to the venue — from the size of the building to the color of the paint on the outside.

The expansion of the boundaries, however, is temporary — just 10 months. But council members say the move affords the city enough time to “review the historic significance of the Showbox theater.” The council appeared to believe that its action would head off the purchase and development of the site by the buyer, Onni Group of Vancouver.

The key accusation in the case is that the council’s action amounts to an illegal taking of property. “The City Council unlawfully adopted a discriminatory, site specific, spot zone specifically designed to thwart petitioner’s sale and the redevelopment of the property,” says the suit on behalf of 1426 First Avenue, controlled by Forbes. The decision, the plaintiff contends, is a “violation of state constitutional rights of freedom from uncompensated takings of private property, rights of free speech and sanctity of private affairs, protections for due process and of equal protection of the law.”

But the case goes further. The owners claim that the council is violating the owners’ First Amendment rights by forcing them to operate the Showbox as a music venue. In other words, they have no choice but to engage in artistic expression, a form of speech, and that, they argue, violates their own freedom of expression. The lawsuit casts the venue as lacking historical significance and in need of earthquake retrofitting.

The suits also contends that the decision to include the Showbox in the Pike Place Market Historical District should have gone under more careful review and been subjected to more public comment, as is normal when deciding on zoning changes.

Spokesperson for the City Attorney’s Office, Dan Nolte, said in an email, “We’re reviewing the complaint, and we look forward to making our arguments in court.”

A spokesperson from the City Council did not immediately return requests for comment. 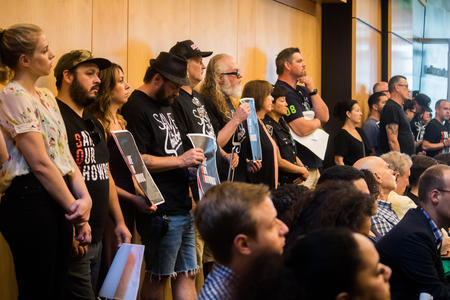 In its lawsuit, the plaintiff and lawyer are withering in their criticism of the Seattle City Council, singling out for the most attention Councilmember Kshama Sawant, one of the leaders in the effort to save the venue. Sawant led a rally that helped to ignite a campaign to save the Showbox.  Sawant’s office did not have an immediate comment.

In one particularly striking passage, the plaintiff compares the council to President Donald Trump. “When politicians cater to populist calls – whether those calls are ‘lock her up,’ ‘build the wall,’ ‘ban Muslims,’ or ‘Save the Showbox’ – civil and other rights are placed at risk,” it reads.