When the muse is mental illness, the moves are brisk, dreamy 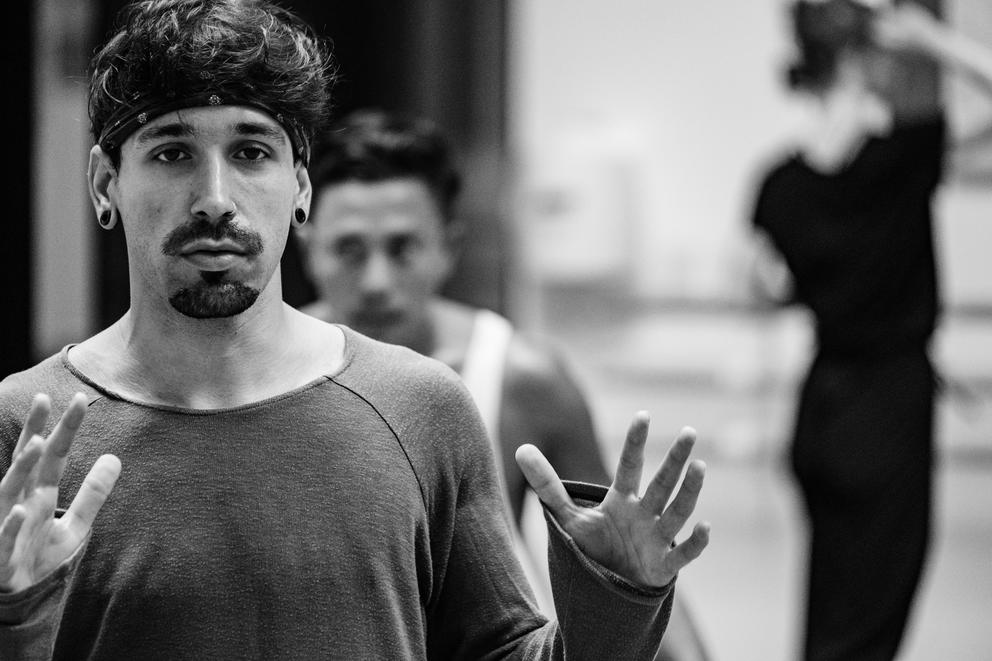 Its first half is busy, propulsive, bursting with energy — although not all the dancers reflect the music (Orquestra Lucho Bermúdez’s “Homenaje al gran Lucho") straightforwardly. Some dancers are animatedly engaged with it, throwing the audience over-the-shoulder come-hither looks, while others are strangely zoned out, shuffling on the dance floor.

In the piece’s dreamy second half, set to Lonesome Summer’s “Slow Meadow,” six dancers become an elastic net supporting a limp and rubber-limbed female soloist. There are vestiges of salsa steps in what they do – but they seem to unfold in a slow-motion dream world.

At a rehearsal last month, De Jesús disclosed that this piece is highly personal.

“I wanted to make a piece about mental illness,” he says. “I have dealt personally with a person that is like this – bipolar – and it is intense.”

“Welcome to Barrio Ataxia” is part of Choreographic Shindig, Whim W’Him’s annual showcase of work by choreographers invited by the dancers to set a piece on the Seattle company. This is Whim W’Him’s first commission from a Puerto Rican choreographer and it’s De Jesús’ first work to be performed in Seattle. It debuts, along with works by Alice Klock (Chicago) and Brendan Duggan (New York), on Sept. 7 and runs through Sept. 15.

The word “ataxia,” De Jesús explains, denotes a degenerative disease of the nervous system that can manifest itself as seeming drunkenness. “It describes the lack of muscle coordination when voluntary movement is attempted,” he adds. “It’s about all the incoordination and imbalance … a neurological imbalance.”

De Jesús was particularly drawn to the cadence of the word.

De Jesús trained as a classical ballet dancer and performed with Balleteatro Nacional de Puerto Rico. While there, he had his first encounter with contemporary dance when the company commissioned a work by Rodney Rivera. For De Jesús it was “a mind-blowing experience – because for the first time I actually experienced dance on a deeper level.… Once I experienced that, it was all I wanted to experience.”

Because contemporary-dance opportunities were limited in Puerto Rico, he moved to New York where he now lives in Washington Heights. He did a two-year scholarship program with The Ailey School and then joined Parsons Dance.

It was at Parsons, De Jesús recalls fondly, that he got to “understand dance in a different way, work with different choreographers, [including] David [Parsons, a former Paul Taylor Dance Company dancer] himself. Touring the world. Learning a thousand pieces at a time. It pushes you to dance smart.… You have a person in front of you to guide you through a process. But it is up to you to really find what works for you. Is it Pilates? Is it yoga? Is it the gym? All the extra things that you’ve got to do in order to keep reaching the next level.” 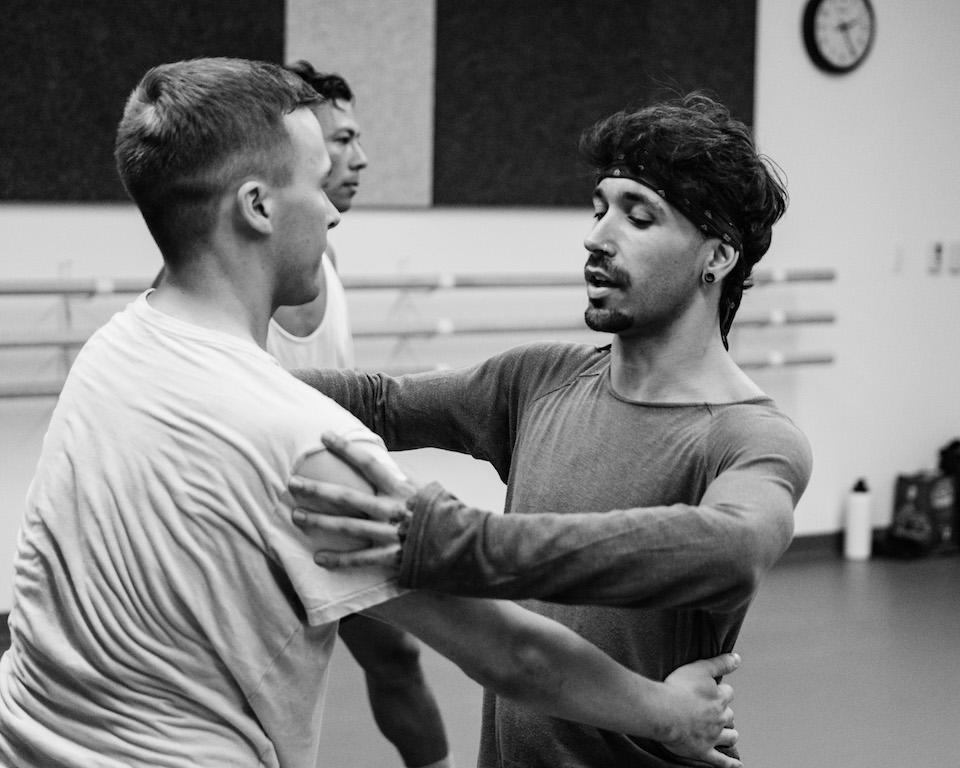 After four years at Parsons, he auditioned for Ballet Hispánico (“one of my dream companies”) and was accepted. But he only stayed for seven months because his career as a choreographer was taking off. “They were super-nice about it,” he says of Ballet Hispánico. “They were like: ‘Our doors are open.’”

De Jesús recently founded his own dance troupe, Boca Tuya (literally “Your Mouth” in Spanish, but De Jesús intends the name more poetically as in “Your Voice”). In rehearsal, De Jesús is quiet, smiling, intently focused on the dancers. After one animated sequence, he tells them he wants clarity over “excess energy.” The idea is to invite the audience into what the performers are doing rather than thrust the dance out at viewers.

When we have a Christmas party, we have salsa. When we go to the bar, there’s salsa. So I am influenced by it.”

In rehearsal, De Jesús is quiet, smiling, intently focused on the dancers. After one animated sequence, he tells them he wants clarity over “excess energy.” The idea is to invite the audience into what the performers are doing rather than thrust the dance out at viewers.

Nothing in “Barrio” stays the same for long. Solos trigger duets. Duets lead to lip-synching. Sassy flourishes are interspersed with collapses. It’s as though the dancers’ zest is fraying around the edges.

“When I talk to my family, I always ask them, ‘How’s everything going?’ And it is crazy that it’s still not quite right,” he says. “If you go to old San Juan, a city, everything looks normal.”

He explains that you may see minor damage there, like a traffic light on the ground. But if you go up in the mountains where roads were washed out and whole bridges were lost, the toll the hurricanes took becomes clear.

“Now most of the middle class is leaving Puerto Rico,” he says. “My brother was one of them. … He just had a kid. And he was like: ‘I must provide. I must go and do well for my family.’ Lots of people are doing it. It’s been happening. But after the hurricane, it like — boom! — actually became really crazy, the amount of people that is leaving the country.”

While he’s discrete about the identity of his friend who suffers from bipolar illness, he is open about his own perceptions of the experience. 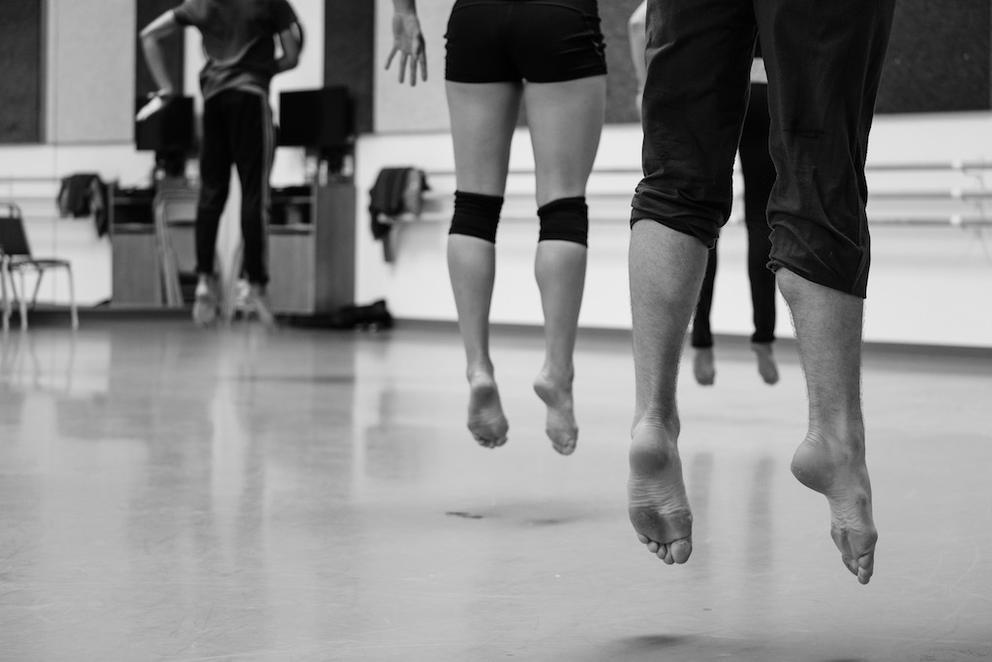 “I can say that every day was unexpected. It felt like the most predictable person – but then all of a sudden it wasn’t. It almost felt like you have to put yourself in a place of understanding. Because when the anger problems come, when that comes into play and is directed to your person, it feels so personal and you always have to go back to remember what that person is dealing with. And you have to try to be the big person in the room, actually remain calm and not lose it. Because sometimes their perception, their reality, is, like, a little blurry. It’s not what you and I see. It’s out of their control, and it took me a while to put myself in that place, because I did not know about this.”

To De Jesús, “Homenaje al gran Lucho” tapped directly into the feeling he was trying to express in the piece.

“When I hear that music,” he says, “my veins, my blood was just like moving. … It has so many changes throughout. It doesn’t stay the same for more than 30 seconds.”

His idea was to use the score to slip into the mind of someone suffering the highs and lows of bipolar illness. “It’s all about the change of moods and stuff happening inside.”

The ambient, serene sounds of Lonesome Summer’s “Slow Meadow,” in the second half of “Barrio,” are “about giving hope,” De Jesús says. “It’s a more emotional part, which can be related to sadness, but there are creative ways that you can find to be uplifting as you’re presenting such a heavy theme.”

The dance steps in the second half, especially a swivel-twist walk punctuated by an occasional tap-tap of the foot, provide almost a “ritualistic element,” he feels, with their slow-motion variations on a salsa impulse that runs deep in Puerto Rican life.

“When we have a Christmas party, we have salsa. When we go to the bar, there’s salsa. So I am influenced by it … but it’s like the flavor, like the spice of it, like the sexiness,” he says. “How do I bring that into my choreography, which is still very contemporary dance? It’s like creating a contradiction. When you put it together, it creates such a beautiful image and result.”