Why I started giving to the homeless 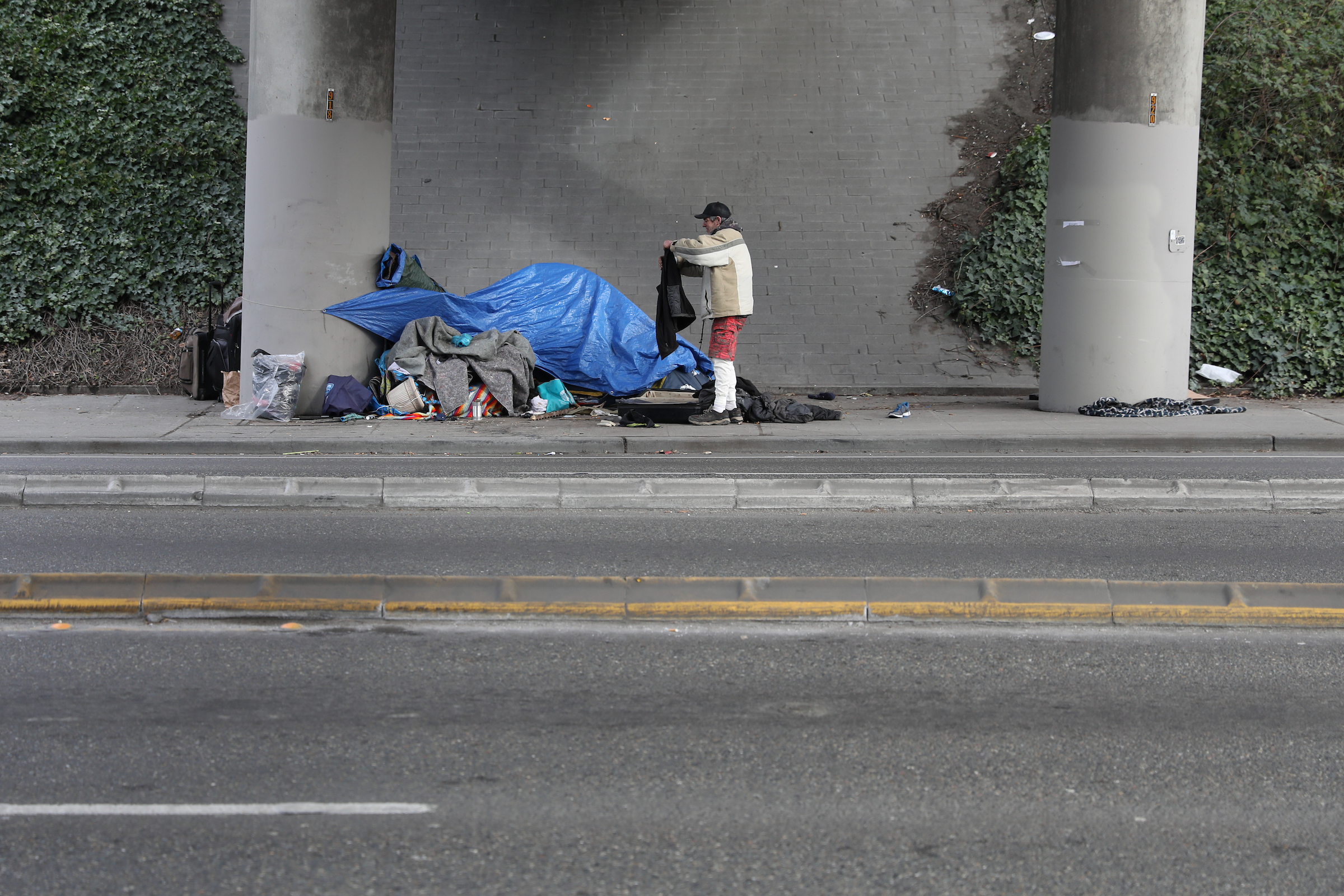 A man underneath Interstate 5 bridge on South Dearborn Street in Seattle: Should people give help directly to the needy? (Photo by Matt M. McKnight/Crosscut)

The debate about homelessness goes on and on, but it skips over the individual sitting on the sidewalk. Imagine yourself homeless after a night outside on the street, sleeping in a doorway, in a tent or a ramshackle vehicle. You wake up with no money and nowhere to go. People in this circumstance are right here in front of us, in our neighborhoods and where we work. It is a matter of choosing to see them or not.

I have worked in Pioneer Square for 20 years. Every morning, my bus passes people sleeping on the sidewalks, some in tents, others on cardboard or curled up in doorways. I see them standing in line and milling about in front of the Downtown Service Center and the Union Gospel Mission. It has been heartbreaking to witness.

Several weeks ago I got off my bus and saw a young man sitting on a bench with a backpack at his feet, looking glum and staring off into the distance. I had some extra cash so I walked up and asked him if I could help out.  He looked up and I handed him a $20 bill. His face lit up. It changed his morning and changed the way I think about giving.

I now advocate giving help in the here and now. Put money directly into a person’s hand. No strings attached, no expectation that it will be spent in the “right way”. A person living on the street shouldn’t have to beg and hold out their hand or wait in a long line for a meal.

Pick a person that looks in need of help and perform a random act of kindness. I cannot change someone’s circumstances, but I can give them a better moment.

I have talked about giving cash with friends and acquaintances and posted my thoughts about direct giving on our neighborhood blog, Next Door. I was amazed at the varying reactions. The overwhelming sentiment was to never give money directly to a homeless person; that giving cash might somehow encourage them to stay in the neighborhood or that they might use it to buy alcohol or drugs.  The underlying sentiment was that they should get their assistance from a food bank or a social service agency. I was told that it was the Union Gospel Mission's official policy to not to give money directly; lots of social service agencies, and even some cities, agree. While many people believe only in giving to agencies providing services, however, journalist Bryce Covert has shown that some research, particularly abroad, suggests that recipients of direct cash help benefit significantly.

Every morning my bus passes a shelter and the Downtown Emergency Service Center. They are overwhelmed. Every $5 or $10 bill put into the hand of a person on the street eases the pressure on shelters and, most importantly, the person. The individual. Some might say it encourages them to come to the Square, but why would anyone who is not already there come on the off chance that a stranger might hand them a $10 or $20 bill?

A common theme that has struck me as particularly sad is the belief that the majority of the homeless were drunks, drug addicts, criminals or thieves. It is true that the category “homeless” has come to include all of those people, but there are so many, many more who are none of those things. Homeless is a catch-all term with too many bad connotations. It is a description of a condition, not an individual. The sins of a few laid upon the many. I would argue that the majority are unemployed, displaced and depressed. Down on their luck.

Another common theme was that they were transients. I recently saw a woman slowly moving down the sidewalk. She had three shopping carts piled high with plastic bags and old suitcases.  She would push one cart 100 feet while watching over her shoulder, afraid that someone would steal one of the others before she could get back to it. True she was in transit, but to where? Not to a shelter because she would have to leave such a substantial amount of belongings outside, for someone to steal. Presumbably, this is also the case for many people living in tents, cars and campers: They look for places to sleep they won’t be disturbed or won’t lose the few possessions they might have left.

And then there’s the idea that they should just get a job. But how do you get a job with no clean clothes or an address to put on an application? Even if you were able to find a cheap apartment, you need first and last month’s rent and a security deposit. What’s that, $3,000 for a cheap place? Where are you going to get that kind of money working for minimum wage? It is a catch-22.

Working in Pioneer Square, the home of the original Skid Row, I’ve had a firsthand look at homelessness. It is has become the epicenter for urban homeless in the Pacific Northwest. For many it is a place of hunger, depression and despair. In the last few years it has rapidly changed and is continuing to change. Wealthy urbanites are replacing the working class residents. Affordable places to live are being renovated or torn down, replaced with $2,000 to $5,000 a month apartments and million dollar condos.

The new cash rich workers and residents are bringing with them the upscale trappings they demand; trendy high-end restaurants, exotic cocktail bars and eateries, and, of course, fast food franchises. Independent merchants, inexpensive cafes and dive bars are being pushed out.  Food trucks have recently been disappeared from Occidental Square, perhaps because they compete with the trendy new restaurants. The neighborhood is at once getting better or worse, depending on your circumstances.

A few weeks ago I saw a cardboard shelter under the awning of an abandoned storefront, one of the buildings awaiting renovation. Its occupants had used Lime Bikes as the framework for their cardboard shack. Recently, I have noticed more bikes being used to surround and block the entrances to sidewalk tents, providing the occupants a small bit of shielding from the outside world. The irony of Lime Bikes, designed for wealthy urbanites and tourists with smartphone apps, being used by the homeless to create shelter is symbolic of the current situation here in Pioneer Square.

In my experience, most of the workers and residents in the neighborhood literally turn a blind eye to the situation, with seemingly 2 out of 3 pedestrians walking with a smartphone in their hand.  They transit the neighborhood looking down in denial of their surroundings. The passing smile and nod of the head seems a lost value. Looking away in denial, whether it be in Pioneer Square or in our neighborhoods, is the easy way out.

What to do about homelessness is a hell of a mess that our government has been trying to solve for years with no good solution in sight. In the meantime my premise is simple: Those of us who have much need to help those without.

We can donate to charities, food banks or homeless shelters, or by giving food, clothing tens or sleeping bags directly to individuals. I advocate putting at least some of the money directly into the hand of a homeless man or woman. Give them a better moment. 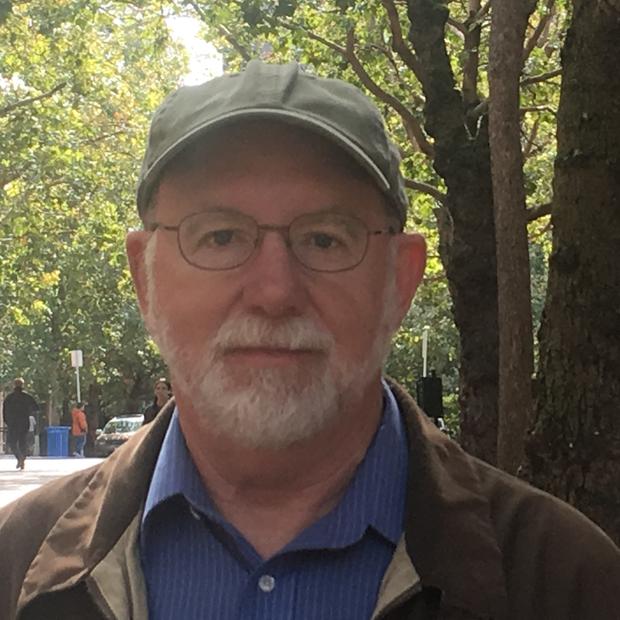 Allen Alston has worked in Pioneer Square for 20 years as an employee health and safety officer. He lives in Shoreline.