A year after Oregon’s Eagle Creek fire, see how much has changed

The Eagle Creek Fire burned nearly 47,000 acres on both sides of the Columbia River. In this 360 video, see how the fire changed the forest and its popular hiking trails. 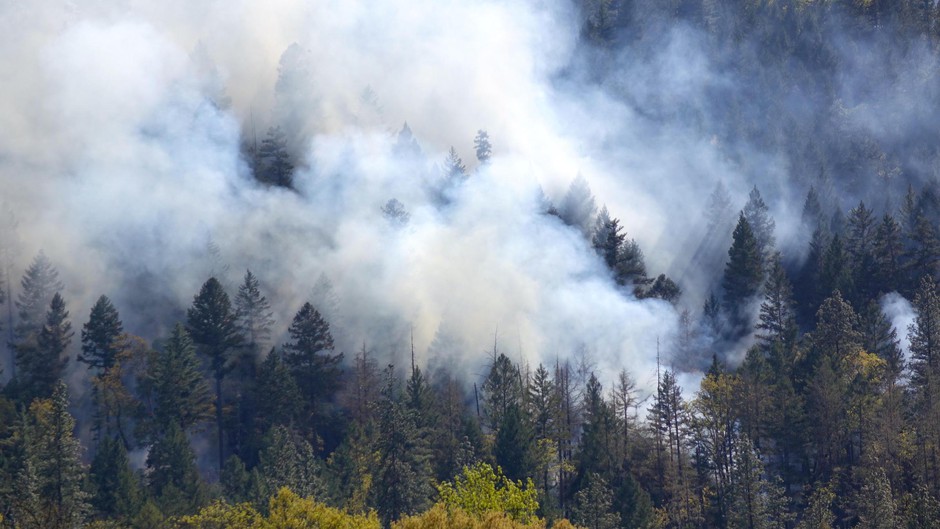 The Eagle Creek fire was started by a 15-year-old lighting fireworks. (Photo courtesy of InciWeb)

A year ago, the Eagle Creek Fire was spreading quickly through the Columbia River Gorge.

Altogether, it burned nearly 47,000 acres on both the Oregon and Washington sides of the Columbia.

You can see how the fire has changed the forest and its popular hiking trails in this  interactive, 360-degree video:

Lily Palmer with the U.S. Forest Service said the fire will permanently change the experience of hiking along some trails in the Gorge.

"Hiking in the burned area after the fire is going to require folks to be a little more diligent," she said. "There’s going to be hazards that didn’t exist before. Though we’ll be getting some great views when we’re up on those trails, looking for snags, looking for rockfall is going to be important because we’ll continue to see those things come down in the years to come."

The fire took out several bridges along the Eagle Creek Trail, making it impossible to hike much beyond the trail head. In Oneonta Gorge, huge fallen trees perch on perilously steep slopes with little to hold them in place.

Palmer said the fire burned much of the moss that held rocks together and kept them glued to the hillsides. That means much of the Gorge is now highly prone to rockfall.

"Down trees on steep slopes with loose rock underneath them can quickly turn into what we call torpedoes," she said. "If that rock loosens, we’ll see those big trees start sliding down the hills."

A lot of work is going into removing hazardous trees and rebuilding trails.

While some trails have been reopened since the fire was declared contained in November 2017, many remain closed because of safety hazards.

Ecologically, the fire changed the forest by burning large swaths of the brush and moss along the ground and killing smaller trees.

Retired U.S. Forest Service Ecologist Robin Dobson said areas that were severely burned – where all the trees have died – could become a whole new habitat type with new species sprouting up as the dead trees fall.

"Some of these species may have been dormant for years," he said. "Many, many years – maybe even decades – waiting for the time to come when the over story would disappear and give them the ability to reach out and go through their life cycle."

“Woodpeckers come in, and they make holes in the trees,” he said. "And then a lot of insectivorous birds such as blue birds come in and they will nest in the hollows created by the woodpeckers."

Many trees have strategies to survive a wildfire. Douglas fir have thick bark to resist the flames, and the big leaf maple can sprout new branches from its roots.

“The big leaf maple may look black, but actually the roots are very much alive,” Dobson said. “So, the tops are all dead and have burned, and new sprouts are just coming out from the base of the trunk that will create new branches from the tree.”

While it might look destructive, Dobson said, the fire actually revitalized the forest.

“Forested landscapes are always changing, and the biggest changes that occur is from some sort of disturbance. Our forests here have evolved with fire, and this is what rejuvenates the forest over time.”