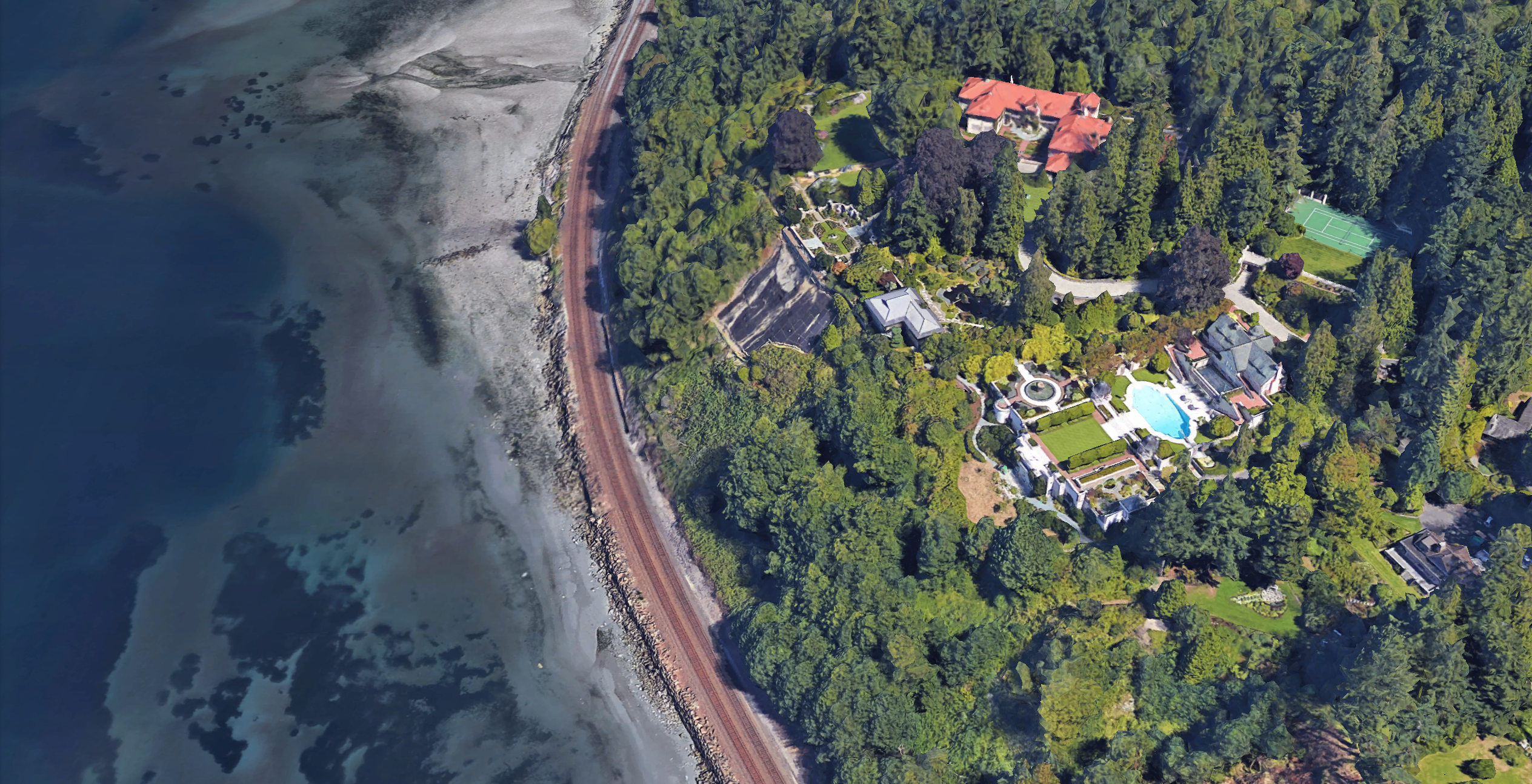 Satellite view of Chris Larson’s properties, on the upper left and center, whose valuations he appealed. (© Google Earth)

For property owners in King County who are upset with their tax bills, there are two options: grit their teeth and pay it or appeal the value of their real-estate to the assessor’s office.

A scant 2 percent of property owners choose the latter, according to King County Assessor John Wilson. And those who do are often able to bring in professional help to guide them through the bureaucratic murk and make the case that their property is worth less than King County says it is — and that they should pay less in property taxes.

Take Christopher Larson. In 2013, the one-time Microsoft executive and part-time owner of the Mariners appealed the value of his 26,490-square-foot, 7-bedroom, 13.5-bathroom home in Shoreline, which was assessed at $29 million. He succeeded, reducing the value to $23.5 million, saving him about $60,000 on his annual property tax bill.

He wasn’t done. That same year, Larson also successfully reduced the value of a second property he owns next door — complete with a 10,000-square-foot home — from $7.7 million to $3.7 million, saving him another $40,000.

Larson appealed again in 2015, further reducing the value of his larger property to $15.2 million, saving him an additional $90,000 that year.

Larson did not respond to a request for comment left with his assistant.

In light of rapidly changing property values, Assessor Wilson has recently encouraged more people to do what Larson has done. But the process for doing so can be intimidating. As a result, the yearly list of appellants skews wealthy and corporate — commercial businesses, wealthy homeowners, and the largest landlord of single family homes in the country

Small businesses and more modest homeowners, on the other hand are less likely to do so.

And, in fact, those property owners who do not receive reduction in their property tax may actually end up paying more as a result of the appeals process. When property-rich appellants succeed in lowering their bill, King County must make up for that lost revenue the following year — meaning some of that burden is passed to other taxpayers. As a result, this route for mitigating the sting of higher bills is making what is often viewed as a regressive revenue stream even more so.

The process for establishing property taxes starts with an assessment, conducted by Wilson’s office — based on sales of similar properties, land value and what’s been built on the property.

If a person or a business disagrees with that assessment, they can appeal to King County’s Board of Appeals and Equalization, a seven-member body appointed by the County Executive. The board requires evidence for the disagreement — information on sales of similar properties, professional cost estimates to fix defects, and development restrictions or limitations.

After the board rules, the appellant or the assessor can choose to elevate the case to the state’s board or accept the valuation.

In terms of total value, commercial businesses dominate appeals. Since 2012, commercial property owners have appealed $190 billion worth of real estate value, according to data provided by the Assessor’s Office. Collectively, the owners successfully reduced their valuations by more than $7 billion in that period, meaning they paid about $71 million less in taxes after appeals.

So far, none of those properties were reduced in value, although some remain outstanding. Regardless, that does not mean that the process did not have value for the companies. A spokesperson from Microsoft cast these appeals’ function as both a test of the system and groundwork for future valuations.

“Microsoft wanted to make sure the assessor had an accurate understanding of the building’s attributes, and the level of completeness if the building is still under construction, to ensure an accurate assessment,” a spokesperson with Microsoft said in a statement, when asked about the company’s reason for appealing.

For some companies, however, the savings have been significant. In 2018 alone, Amazon appealed the valuation on 22 of its properties — valued at a combined $1.9 billion. The company succeeded in reducing that assessment by about $42 million, saving it north of $400,000 in property taxes this year.

Hotels often appeal and are harder for the Assessor’s Office to defend against, because of what Wilson calls the “intangibles” — quantifying the worth a name like Marriott versus Days Inn, for example.

Starwood Hotels and Resorts has appealed every year since at least 2012 on behalf of a single property: the downtown Westin, one of the city’s most valuable pieces of real estate. In 2012, 2014 and 2015, the company successfully cut its valuation by between $40 million and $50 million each year, saving the hotel around $1.5 million in taxes in that period.

For all of its progressive bona fides, Seattle’s tax structure hits the poor the hardest of any city in Washington — a state that has one the country’s most regressive tax systems in the country — and goes easy on the wealthy. As the region grows and hurts for housing, transportation, child care and other social needs, the cry for more revenue streams — such as taxes on income, capital gains, carbon, employee hours — has grown louder. That search for new revenue sources has become more frantic as property values, and in turn property tax bills, have increased.

So, when Abby Lawlor with Unite Here Local 8, which represents hotel workers, sees the Westin fighting to reduce its bill, it’s frustrating — the union is in contract negotiations with the Westin so, as she says, workers can “earn enough to be able to live here and get housing.”

At the same time, the hotel industry was among the business sectors that poured money into defeating the Seattle City Council’s business tax to fund housing and homelessness earlier this year.

“It’s well-established that the tax system here is broken and is regressive even more so than other places,” said Lawlor. When hotels like Westin win their appeals, she said, the tax burden “falls on homeowners and those struggling to stay in their homes.”

Bryan Thrush, a D.C.-based executive with Host Hotels, which acquired Starwood, is listed as financially responsible for the Westin; he did not return a request for comment. A spokesperson from the Washington Hospitality Association declined to comment.

Among homeowners, the average value of properties that were appealed over the last six years is $879,000 — more than $200,000 above King County’s current median home price.

Many of the appellants are landlords and real-estate and property-management companies. Essex Property Trust, a real-estate investment firm that functions up and down the West Coast challenged the value of its properties 517 times over the last six years. The company saved itself about $2.5 million in property taxes as a result.

The most prolific appellant in the period reviewed by Crosscut has been Invitation Homes, the country’s largest landlord of single-family homes. In the wake of the housing collapse, the company snapped up hundreds of properties in the area out of foreclosure. Since 2012, the company has filed 733 appeals, using either the company’s name or one of nearly 40 limited partnership companies.

A spokesperson with Invitation Homes told Crosscut, "Invitation Homes has a fiduciary responsibility to assure that it’s being assessed the appropriate value on the homes that it owns. So we work through the regular processes when we believe the assessment isn’t accurate."

There is nothing unethical about filing appeals to assessed value. In fact, amid concerns about rising tax bills for people on fixed incomes, the assessor’s office recently created a tool for people to calculate their bills. “If you think it's because we made some kind of material mistake, for God's sakes, bring it to our attention and if we're wrong, we'll fix it,” Wilson told Crosscut.

But Wilson also understands that the appeals process can scare most home and business owners away, leaving mostly those who can pay for professional help.

“If you have the financial resources, you can hire all this talent — attorneys, accountants, appraisers — to come in and challenge our value,” said Wilson. “If you're a mom and pop in West Seattle or a mom and pop in Enumclaw, you go, ‘What am I going to do?’”

Appealing has gotten easier recently. You can file appeals electronically, for one. Additionally, King County has a Tax Advisor Office to help taxpayers with appeals preparation. But Wilson said there are still a few things his office would like to look at to further ease the process.

“Ideally we'd like to get to a point where if you had a smartphone, you could participate either via video conferencing or teleconferencing and not have to come down [to an appeal hearing],” he said. They also would like to streamline the system as the office improves its computer system.

And more generally, Wilson, who was elected in 2015, supports some method to balance the scales between commercial and residential appellants — perhaps a general homestead tax exemption for property values up to a certain level.

This story has been updated to include a statement from Invitation Homes.