Abandon hope all ye who enter the "Period of Maximum Constraint" 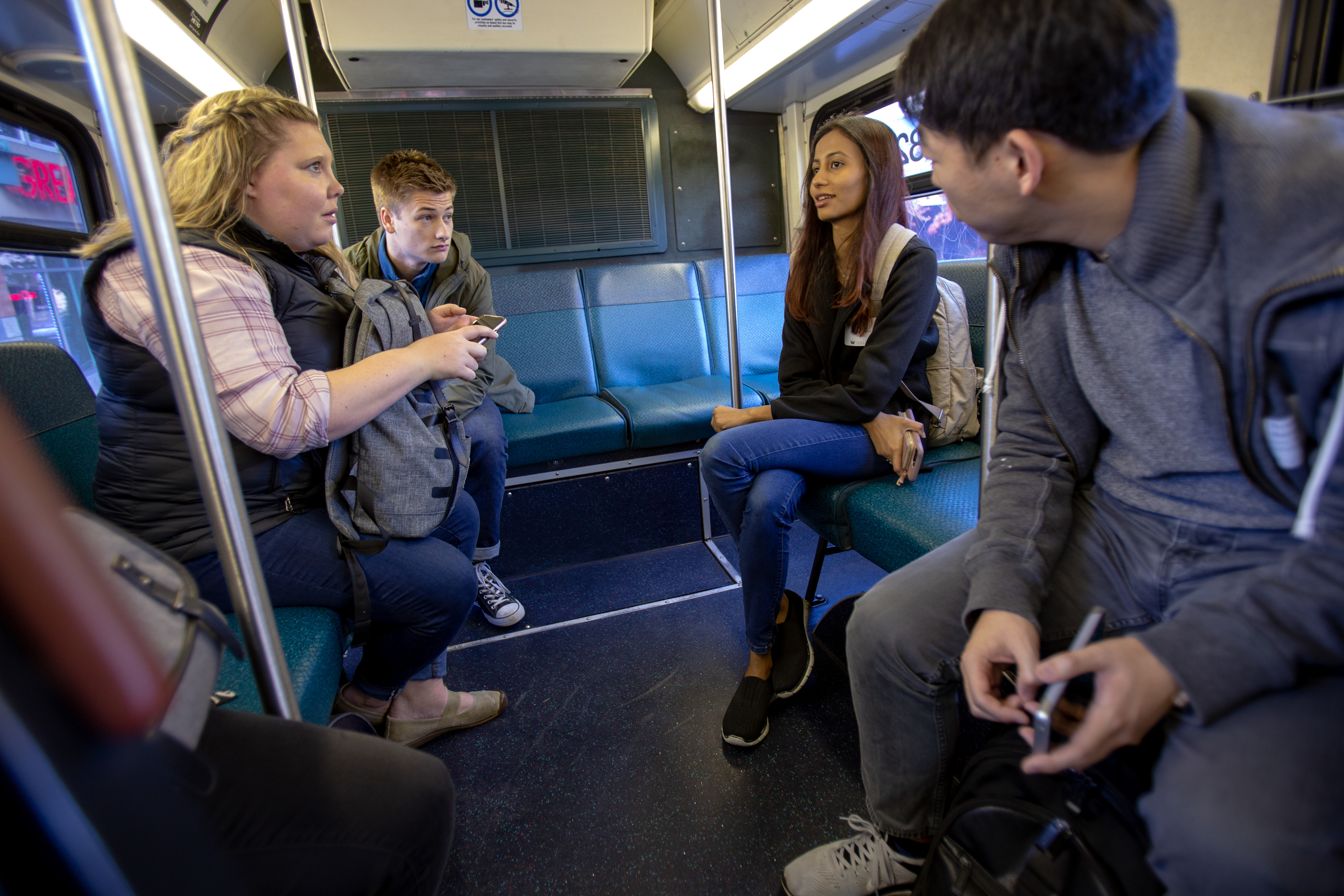 University of Washington students interview a bus rider in Seattle to gather data for their "ideathon" for easing the Period of Maximum Constraint. (Photo by Matt Hagen Photography)

Seattle is doomed — at least in terms of its traffic for at least the next three years. Already, morning and evening gridlock seems to start earlier and end later. I-5 through downtown is nearly always jammed up. Overloaded buses wait through multiple light cycles attempting to inch through intersections at rush hour. And it’s going to get worse. This year, we entered the “Period of Maximum Constraint,” the city’s euphemistic name for the time now through 2021, in which a series of events will compound Seattle’s traffic problems.

In addition to existing traffic — about 47 percent of commuters drive alone — and construction projects, there are a few really big plans on the horizon that will truly gum up the works. In January, the Highway 99 viaduct will be closed for three weeks before the new replacement tunnel opens. Buses will be booted out of the downtown transit tunnel and onto surface streets as early as spring 2019 as part of Sound Transit’s light rail expansion. The Convention Center expansion’s massive construction site will block traffic lanes and create big headaches.

So what is a city to do? A group of three dozen University of Washington graduate and undergraduate students spent the past weekend trying to figure that out.

Put on by UW’s CoMotion and sponsored by Challenge Seattle, an initiative by private sector CEOs to address the city’s big problems, the Imagine Mobility Ideathon asked teams of students, majoring in everything from public policy to engineering to computer science to English, to come up with their best solution to help ease the pain of the Period of Maximum Constraint.

Though the students only spent three days working on their ideas, the weekend was not meant to just be a theoretical exercise. The winning team will get funding, time, and mentorship to further develop their idea and pitch it to investors and public agencies who might be able to make it real. Whether or not the top ideas presented here are ever fully realized, they do represent creative solutions to a vexing problem that, sadly, isn’t going anywhere on its own — at least not for the next three years.

The winning team — consisting of Simon Suh, Proshonjt Mitra, January Shen, and Chris Woodruff —wants to see public schools turned into park-and-ride mobility hubs. In their interviews with people on the street around Northgate Mall, the team members heard over and over that the reason people drive to work is that they first have to drop their kids off at school. Using public transportation to do that leads to excessively long commutes.

The team modeled their idea around an imaginary mom who lives in Everett and works at Northgate. By car, her commute takes 45 minutes. By bus, it would take more than double that, due to the need to transfer lines once or twice.

If schools could be used as park-and-ride hubs for popular transit lines, organizing carpools, or grabbing an Uberpool or Lyft Line, then working parents might consider leaving their cars behind for the final leg, from their child’s school into work. The team doesn’t think the mobility hub model would produce faster travel times than driving, but for their imaginary Everett mom they calculate it could create 45- to 75-minute commutes, perhaps close enough to drive times – and without the hassles of rush hour driving and finding parking – to incentivize someone to choose the bus over their car.

The judges picked the idea as the winner because they said it had potential to be developed into a real-world solution and because they were unaware of any other city doing similar experiments focusing on working parents and transportation.

“Parents are a unique segment of commuting population,” said Commute Seattle’s Hopkins. “There’s so many variables and we haven’t tackled that really well.”

Many of Seattle’s large companies offer their employees free or discounted ORCA transit passes. For tech companies and other businesses that rely mostly on computer-wielding workers, telecommuting is already common practice.

The second place team — consisting of Andrew McKenna-Foster, Harsh Dev, Yanjie Niu, Yuan Wang and Ryan Cheng — thinks that these companies can do better and envisions an app that would help them coordinate their workers’ commutes, to get commuters out of cars.

Through the app, companies could stagger commutes to ease the load on Seattle’s streets, rather than having thousands of employees show up at 9 am. The app could also be used to establish work-from-home days or days where employees are encouraged to take transit instead of driving. If a few hundred or more people from one company in Pioneer Square were working from home the same day, then a few hundred from another company a couple blocks away were all taking transit, it could have a noticeable impact on street traffic. To further incentivize the program, employees would get bonuses or discounts from local companies in exchange for participating.

The judges decided to award a third place tie to two teams with very different ideas for incentivizing public transit use. The first team — Weng-Ching Chung, Peiling Li, and Zayd Abdel-Kamel — wants to create an app that rewards bus and light rail riders. The more you ride, the more points you accrue, the higher you’re ranked on the game’s leaderboard. Local businesses could sponsor the game in exchange for providing prizes and discounts. King County Metro and Sound Transit could offer free or reduced fare rides as prizes.

Hartford, Philadelphia, Montreal and other municipalities have all experimented with similar rider loyalty programs. And though Montreal reports a small increase in ridership from its rewards program, a study by TransitCenter found faster, more consistent transit service is the thing that gets people on board.

Getting people on board is what the other third-place team hopes Sound Transit might do with Link light rail. Dawn Cheung, Snehal Kota, Andrew Brammeier, Shreya Kuruvilla, Archana Matela, and Suuing Lio want to see the agency experiment with express trains and standing-only cars.

Express lines that don’t stop at every station and, as a result, speed up service are common in metro systems around the world. The team imagines an express light rail train that runs during rush hour and only stops at the seven most heavily-used stations – Angle Lake, SeaTac, Columbia city, Beacon Hill, Westlake, Capitol Hill, and Husky Stadium – rather than all 16.

To increase capacity, the team also wants to see the implementation of a standing-only car or a car with very limited seating.

Granted, having express trains is likely impossible on the current Link system since there’s only one track line in each direction and the “local” trains would get in the way of the express train. But in theory it would certainly be faster.

Most of the students didn’t come with transportation planning or policy expertise, but Hopkins pointed out that can be an advantage. Outsiders come to problems with fresh eyes and even if they’re working in the theoretical realm, out-there ideas can sometimes morph into real solutions.