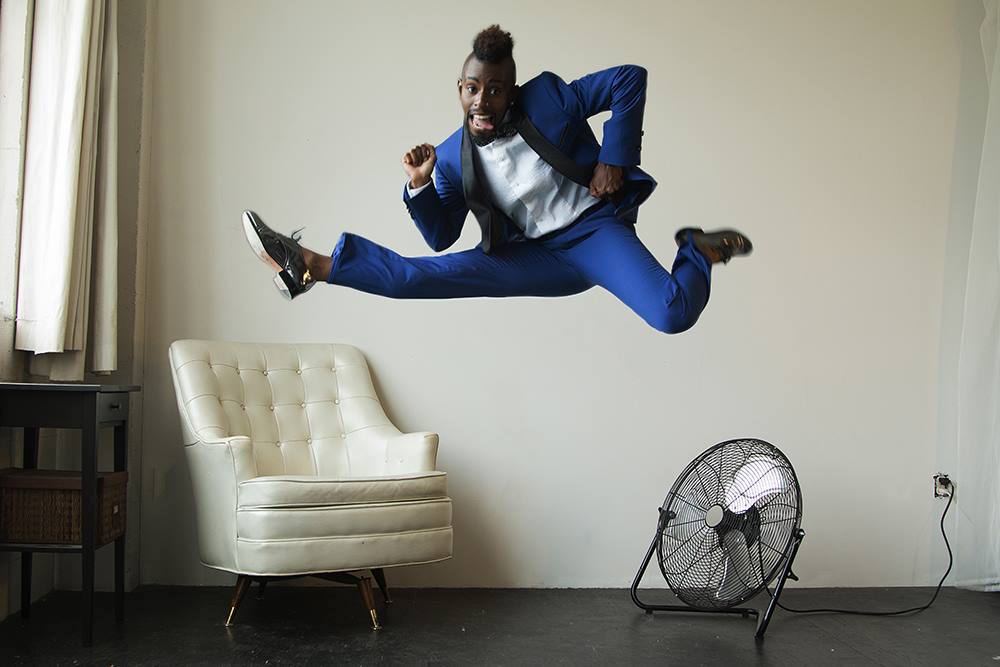 Seattle dancer Namii will appear Oct. 5 in On the Boards’ “Solo: A Festival of Dance” (Photo courtesy of On the Boards)

Meany Center for the Performing Arts opens its 2018-2019 World Dance Series with the sinuous, colorful stylings of India’s all-female Nrityagram Dance Ensemble. Their evening-length work, “Samhāra,” is presented in collaboration with guest artists from Sri Lanka’s Chitrasena Dance Company, and features live music from Indian and Sri Lankan musicians. The New York Times’ Brian Seibert, reviewing a production of “Samhāra” that played the Joyce Theater in 2012, explained, “Just as the Nrityagram dancers specialize in the Indian classical form of Odissi, so the Chitrasena dancers are experts in the Kandyan style of Sri Lanka. Both companies are celebrated for making new work from very old traditions, and ‘Samhāra,’ their collaborative production at the Joyce, is framed as a bringing together of dance traditions with shared ancient roots.” This is Nrityagram’s Meany Center debut.

Orchestra Seattle / Seattle Chamber Singers: The Bounty of the Earth

This semi-professional 75-piece orchestra and 55-member choir founded by George Shangrow in 1969 has a new music director: William White, a former assistant conductor with the Cincinnati Symphony. In his debut season (watch his preview here), he’s highlighting the work of French composer Lili Boulanger (1893-1918), the first female winner of the Prix de Rome composition prize (at age 19). If Boulanger sounds like a familiar name, that’s because her older sister, Nadia Boulanger, was a legendary composition teacher to a startling lineup of American composers, including Aaron Copland, Virgil Thomson, Philip Glass and Seattle’s Quincy Jones. Lili, however, was the child prodigy in the family. Family friend Gabriel Fauré discovered she had perfect pitch when she was two, and during her short life, she made a big impression. Her bold, dynamic musical setting of the 24th Psalm, “The Earth Belongs to the Eternal One,” is part of this season-opening program, along with Copland’s Suite from Appalachian Spring, Haydn’s “Autumn” (from The Seasons) and White’s own composition "Acadia Fanfare."

Solo: A Festival of Dance

Four nights. Four different programs. This new festival — curated by On the Boards’ new artistic director Rachel Cook, associate producer Clare Hatlo and director of program management Charles Smith — celebrates the bold bet of going solo. Each evening opens with a studio-theater performance by Seattle’s Dani Tirrell. Mainstage attractions include locals Wade Madsen, Namii and Alyza DelPan-Monley. Among the out-of-towners are Kiruthika Rathanaswami (Edmonton, Alberta), Nora Sharp (Chicago), Troy Ogilvie (New York City) and Orlando Hernández (Providence, Rhode Island). Cook says these solo creations will “refocus on the core of how we define dance as a medium and discipline.” A lecture and a panel discussion are also on the roster, as well as an itinerant performance proceeding from the Central District to OtB’s Lower Queen Anne headquarters on Sunday afternoon.

Pacific MusicWorks, the Seattle instrumental and choral ensemble led by Stephen Stubbs, tours its Bachtoberfest show around the Sound this weekend, proving Bach is appropriate in all manner of venues, from breweries to churches to bars. The program centerpiece is J.S. Bach’s "Brandenburg Concerto No. 5," complemented by works from Johann Bernhard, Wilhelm Friedemann and Wilhelm Friedrich Ernst Bach. Soloists Tekla Cunningham, Henry Lebedinsky and Joshua Romatowski join the fugal fun.

Seattle photographer Paul Berger has restless feelings about space — he likes to stretch it, fracture it, subvert it, play with it. In his verdant photo collage, Sum-11, Warp & Weft (2002), he divides a garden vista into 35 segments, with the same attendant gardener turning up in three of them. In Green Forest, Panorama and Lichen Forest, Panorama, both from 2009, his Cinemascope vistas of wooded landscapes each have a barely visible human present in them. Mathematics, a black-and-white series of gelatin silver prints from the 1970s, tend toward the abstract as they make a bracing visual fugue of blackboard-scrawled equations and formulae. Occasionally Berger strikes a political note. Double RR Puppet, Print Out (1984) is a distorted double portrait of Ronald Reagan with what looks like the peaks and plummets of a stock market chart behind him. Berger likes to slice and dice reality, just to see what he can make of it.

Seattle visual artist Claude Zervas’s show, in the back rooms at Greg Kucera gallery, follows maverick paths in abstract oil paintings that play subversively with color and spatial perception. Zervas uses workshop tools as well as paintbrushes to create his corrugated/bas-relief effects on flat wood panel. Some of them might be described as gloppy geometrical exercises, tightly controlled yet with deliberate paint overspills that take them in a 3D direction. This is enjoyable, quirky, eye-bending artistry. —M.U.

If you go: Greg Kucera Gallery through Oct. 23. Artist talk Oct. 6 at noon.