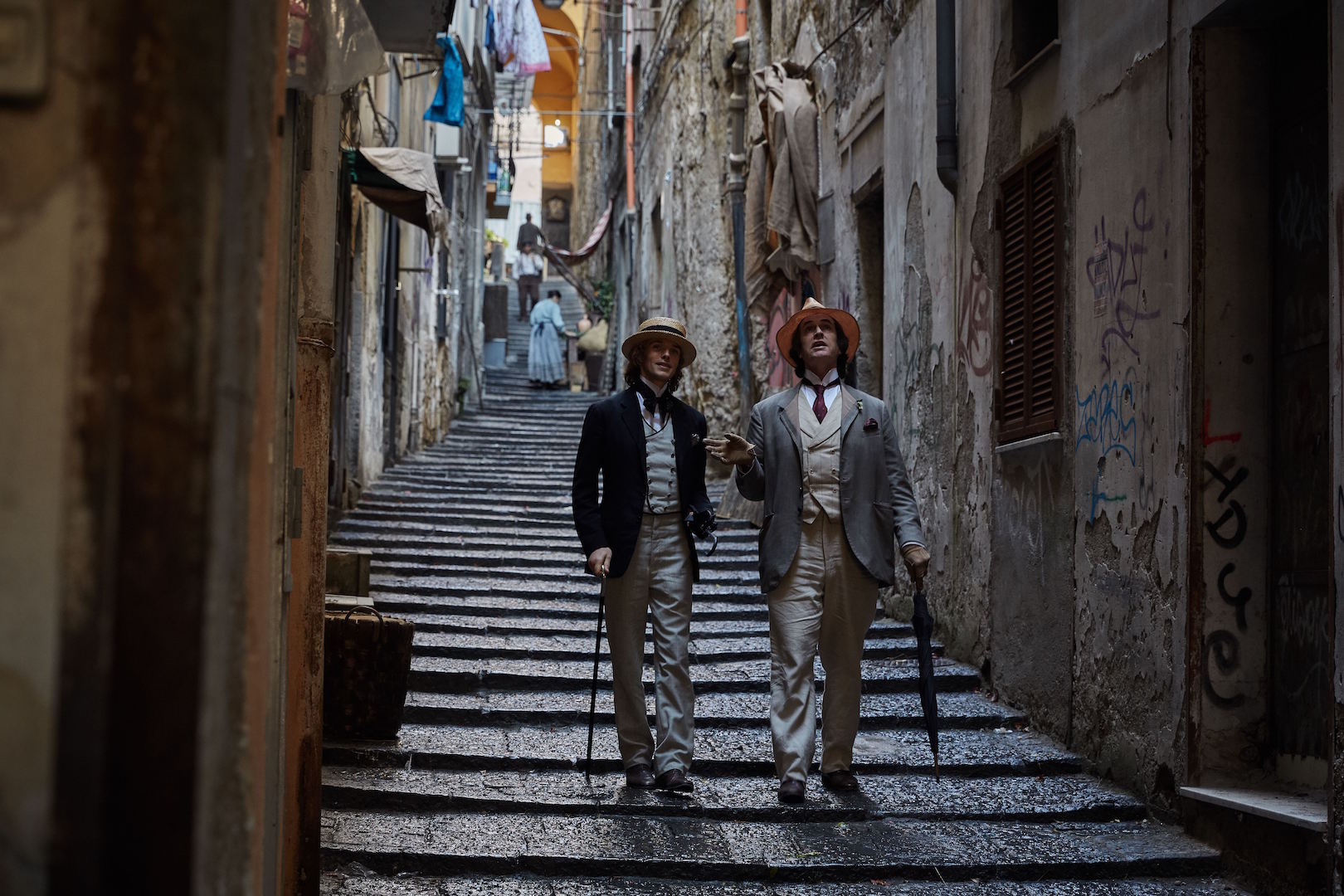 Rupert Everett and Colin Morgan in The Happy Prince.

Seattle’s “living museum of modern dance” (as local arts writer Sheila Farr calls it) is back for its annual showcase, curated by University of Washington dance professor Hannah Wiley, whose knowledge and curiosity about dance’s past never lets you down. Highlights this year include two works by female choreographers. Two excerpts from Cloudless by Susan Marshall — whose Kiss is a Pacific Northwest Ballet favorite — offer witty, prop-centric pieces in which dancers interact with inanimate objects in startling ways. Lucinda Childs’ Katema, inspired by her observation of tidal-inlet waters on Martha’s Vineyard, is as rhythmic and intricate as the lapping of waves; it’s also one hell of a challenge for its four dancers to memorize and master. The pace is steady, and the movement language minimal. Yet its incremental evolutions of turn and step build up an airy excitement. (Note: CDC is premiering a newly expanded version of this 1976 piece.) The earliest piece on the program, Harald Kreutzberg’s Dances Before God, was created in 1927. The most recent, Daniel Charon’s Storm, dates from 2011.

Iain Mangum: You Can’t Take Everything With You

This Seattle photographer, a recent graduate from Cornish College of the Arts, creates vividly distressed images of natural and industrial landscapes around Puget Sound. The core image may look like a hand-tinted postcard of a beach party, a Mount Rainier vista, a railroad trestle or a container ship in dock. But extraordinary intrusions of visual static deliberately mar anything conventionally picturesque about the scene. In Beachcomber, harsh burnt strips – resembling film melting in a movie projector – lend an apocalyptic twist to ordinary seaside revels. In Gold Rush, some sort of lurid aurora borealis seems to be streaking and smearing the sky overhead. Mangum, in his artist’s statement, says his focus is on “creating beauty through processes of disintegration.” His medium – 120 format color film, image transfer, digital scan, archival inkjet print on dibond – is a layered mix of analogue and digital processes manipulated to reflect “on entropy and acceptance of loss through the act of creation.”

Seattle Opera: The Turn of the Screw

Henry James’ cunningly ambiguous ghost story, in which the ghosts may be the figments of an overwrought governess’s imagination, has inspired numerous adaptations, including Jack Clayton’s great 1961 film with Deborah Kerr, The Innocents, and Benjamin Britten’s eerie, angular operatic score from 1954. Seattle Opera is promising “a labyrinthine new production” of Britten’s unnerving masterpiece. Cast members reprising their roles from previous Seattle Opera productions of The Turn of the Screw include Elizabeth Cabellero as the Governess, Maria Zifchak as housekeeper Mrs. Grose, and Ben Bliss and Marcy Stonikas as the ghosts —Peter Quint and Miss Jessel — who may have possession of the souls of the two children in the governess’s charge. Plan on being exhilaratingly chilled and disoriented.

Call it one of the great vanishing acts in our local literary scene. Short-story writer Thom Jones — a National Book Award finalist for his first book, The Pugilist at Rest (1993) — wrote two more collections, Cold Snap (1995) and Sonny Liston Was a Friend of Mine (1999), before falling silent for 17 years. When Jones died from diabetes complications in 2016, fans wondered if he’d eked out any more fiction between his battles with ill health. Night Train: New and Selected Stories gives us the answer. It includes seven gloriously crazed new stories, plus highlights from his first three collections. Jones’ specialty is rambunctious, delusional maniacs, usually alcohol- or drug-addled. They’re utterly confident and completely unreliable in their twisted takes on the world. They also lack the wherewithal to exercise “a reasonable amount of disaster containment” in their lives. The narrator of “Volcanoes from Hell” is typical. “I like to work song lyrics into my conversation,” he confides to us. “My court-appointed shrink says it’s a schizophrenic trait but chicks go for it.” Jones’ hilariously monomaniac anti-heroes (and occasional anti-heroines) keep you on the edge of your seat until the closing line. His widow Sally Jones and other Jones devotees will “hold forth and/or read selections from the work” as a final send-off to this much-missed connoisseur of chaos.

With its magnificent water-and-mountains setting, the Puget Sound region inevitably has been home to a strong landscape painting tradition. This new group show at Woodside/Braseth Gallery gives you an idea of how variously that tradition has manifested itself. Works from old Northwest masters are here, including Kenneth Callahan’s near-abstract meditation, Summer Storm, Fractured Forms, from the 1970s, and University of Washington Art School founder Ambrose Patterson’s pleasurably weightless 1945 study of lakeside swimmers, Chelan. But the dandiest entries here are of more recent vintage. David Kroll wields exquisite control in oil paintings that are equal parts naturalism and artifice. Tidy rows of birds’ eggs, butterflies, egrets, twigs and vases serve as foregrounds to stark mountainscapes. Kroll’s virtuosic technique is photorealistic, but his vision is surreal. Jared Rue is breaking new ground in his depictions of Pacific Northwest forests, especially in a series titled Burn Pile, in which heaps of brushwood are rendered in oil, metal leaf and spray paint against a white-void canvas. Other highlights include Lisa Gilley’s Peyto Lake (Banff National Park, Alberta, Canada), in which the landscape seems to be creating its own ideas about itself thanks to the subtle distortions of Gilley’s silky yet sharp brushstrokes, and Susan Bennerstrom’s Into the Blue Mountains, in which two kinds of order — an upscale glass-walled house interior and a rolling manicured meadow visible through its floor-to-ceiling windows — create a rich harmony. Natural settings take digitally-manipulated turns, too, in Nathan Di Pietro’s Deep Style Nature, created by doing a virtual-reality scan of a landscape painting, then creating a 3D object from it and painting an egg-tempera-on-panel depiction of the object. If you want to plumb the possibilities of landscape artistry in our region, this is the show to see.

If you go: Interpreting the Landscape, Woodside/Braseth Gallery, 11 a.m.-6 p.m. Tuesdays-Saturdays through Nov. 1

The Seattle writer – whose 1994 novel, The Gifts of the Body, was recently cited by Entertainment Weekly as a classic of AIDS literature, is back with a slim new collection of mordant fables, Not Heaven, Somewhere Else. The new book finds Brown blending grotesquerie and pragmatism in unexpected ways (“Your head on a platter would weight more than it looks”) and spinning variations on classic fairy tales (“Hansel and Gretel,” “The Girl Who Cried Wolf,” “To Grandmother’s House”). For Brown, “Once upon a time” is a jump-off point to dark corners of the psyche.

Seattle’s biggest LGBTQ film festival is back with an eclectic lineup of feature films and dozens of shorts. The Happy Prince, starring and directed by Rupert Everett, opens the festival on Oct. 11 with a tale about Oscar Wilde’s final years (Colin Firth and Emma Watson co-star). The Documentary Centerpiece on Oct. 14 is Transmilitary, about Trump’s attempted ban of transgender soldiers from the U.S. armed forces. Closing the festival on Oct. 21 is Rafiki, a love story involving two teenage girls that was banned in Kenya for its “clear intent to promote lesbianism.” (Ironic twist: A Kenyan judge recently lifted the ban for one week so the film could be eligible for a foreign-language Oscar nomination.) Other films of note: Making Montgomery Clift (Oct. 14) is a fascinating documentary co-directed by Clift’s nephew that argues the legendary actor, in his off-screen life, wasn’t quite the tortured soul his biographers made him out to be. The Heiresses from Paraguay (Oct. 14) is a wry, downbeat tale about a 50-something lesbian couple losing whatever heirlooms they had after Chiquita lands in prison for her debts (Ana Brun, who plays Chiquita’s withdrawn but quietly rebellious partner, won the Silver Bear Award for Best Actress at the 2018 Berlin International Film Festival). Kill the Monsters (Oct. 13) is a warp-speed screwball comedy, zanily shot and edited in stylish black-and-white, set absurdly to an all-Sibelius soundtrack. Plot: A bickering gay ménage à trois on a cross-country road trip tries to convert everyone they meet to the uplifting joys of the three-way lifestyle, even though they don’t practice half of what they preach. For the full festival lineup, go here.