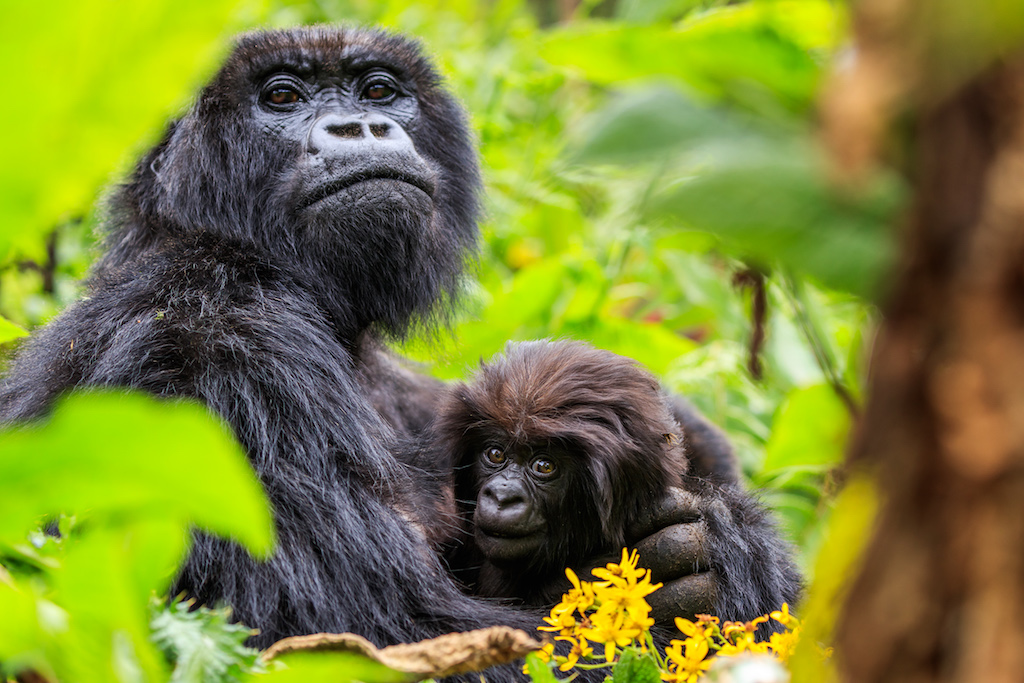 Photo by Ronan Donan, who will be speaking as part of the National Geographic Live! series.

Where else can you take in a lesson about geological mysteries, see stunning photographs of caribou, hear stand-up comedy through a Native American lens and listen to an innovative horn quartet — all in one evening? Ampersand Live, a stage show produced by local land-conservation group Forterra and based on its annual journal of arts and environment, has grown into one of fall’s must-see events, blending eye-opening environmental stories with appearances by some of Seattle’s finest artists. Created and curated by Crosscut’s Florangela Davila, Ampersand Live celebrates its fifth edition with dance by Zoe Scofield, an animated film by Drew Christie, music by The Westerlies and Tomo Nakayama & many more. — B.D. 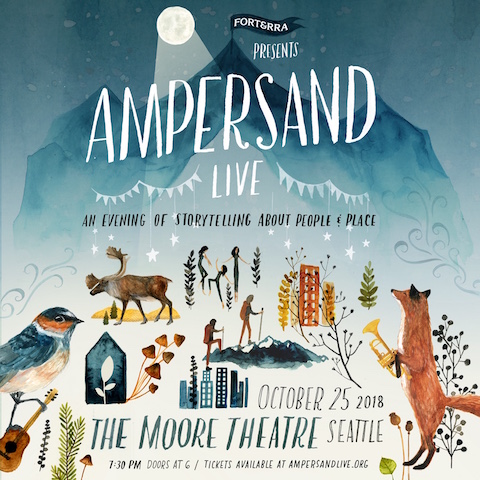 The new novel by Barbara Kingsolver has been getting mixed reviews, but I found it fascinating. Alternating between a narrative set during Trump’s rise in the 2016 presidential campaign and a tale of a utopia going fatally off-course in the 1870s, Unsheltered dwells on what happens when, despite all your best efforts, life gives you “nothing substantial to rest on.” Kingsolver’s tale of a struggling 50-something couple (she’s a laid-off journalist, he’s a laid-off professor) as they try to navigate an all-bets-are-off 21st-century world certainly hits home, even if it has slack passages. Just about perfect is her historical flashback to the friendship between a late-19th-century science teacher, in trouble for mentioning evolutionary theory in his classroom, and his eccentric neighbor, real-life botanist Mary Treat, who turns out to be in correspondence with Darwin himself. Recently abandoned by her husband, Mary is now free to conduct her experiments as she pleases (they include poking her finger in a Venus fly-trap to see what damage it can do her). Both narratives unfold in the southern New Jersey town of Vineland, founded shortly after the Civil War as an alcohol-free planned community. The parallels that Kingsolver draws between their worlds feel justified. There’s hard-won wisdom in this novel, and profound doubt as to where our future is taking us. —M.U.

Works for string quartet aren’t usually seen as comedy fare. But there’s no other way to describe John’s Book of Alleged Dances. “These dances,” composer John Adams writes, “are ‘alleged’ because the steps for them have yet to be invented. They cuss, chaw, hock hooeys, scratch and talk too loud. They are also, so I’m told, hard to play.” The titles of the movements alone — including “Alligator Escalator,” “Stubble Crochet” and “Toot Nipple” (the name of a character in Annie Proulx’s novel Postcards) — raise a smile. The excerpts that the St. Lawrence String Quartet will play are set to a rhythm track composed from samplings of prepared piano sounds. Also on the program: a “Discovery” presentation of Haydn’s String Quartet in F Minor, Op. 20, No. 5 (in which the players “unpack” Haydn’s early masterpiece via an “active listening” demonstration, followed by a full performance of the piece) and Beethoven’s late-phase masterpiece, String Quartet in F Major, Op. 135. — M.U.

It's almost impossible to believe that a Sept. 11-related musical could leave you so hopeful about the kindness of man, but this is one of those shows that deserves to be experienced by anyone who could use a serious pick-me-up. Plus, Seattle can take credit for helping make it into the Broadway hit it is (it was staged at the Seattle Rep back in 2015). Tight, funny and captivating, the story is based on actual events when dozens of planes were diverted on 9/11 to tiny, out-in-the-middle-of-nowhere Gander, Newfoundland. How that community responded — all hands on deck, school gyms turned into shelters, donations of food and diapers and reassurance to hosts of scared and helpless airplane passengers and crew — is translated into a show that catapults you into remembering that harrowing day and sends you into imagining how you might respond to someone in need. It's deeply cathartic in so many ways and note: a song about the journey of a female pilot breaking the glass ceiling might cause some serious whoops from the crowd. I am telling everyone who I run into to Go See This Show. — F.D. 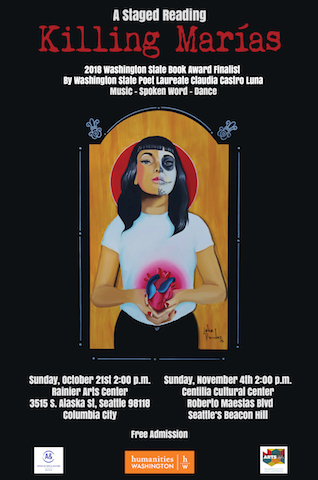 Claudia Castro Luna, the Washington State Poet Laureate, translates her epic poetry collection about the disappeared women of Juárez, into a theatrical piece with readings by Donna Miscolta and Catalina Cantu, music by Trio Guadalevin and a dance performance by the Milvia Pacheco. Deliberately timed in conjunction with Día de los Muertos events, it's a happening that's part cultural, part literary and part social justice. — F.D.

The 2018-2019 season of National Geographic Live! opens with “Social by Nature,” in which biologist-turned-photographer Ronan Donovan looks at “social animals” — chimpanzees, gorillas, wolves, bears — whose collective behavior parallels ours in striking ways. Donovan will discuss his documentation of these animals in the wild, the threats they face and “what we, as fellow social mammals, can learn from them.” This quality series offers terrific audio-visual fare and behind-the-scenes storytelling. — M.U.

Silent Movie Mondays: The Cat and the Canary

The Paramount Theatre’s 2018-2019 silent film series kicks off with a “haunted house horror-comedy” by German director Paul Leni. The Cat and the Canary was the first film Leni made after moving to the U.S. The plot: On the 20th anniversary of a millionaire’s death, his relations gather in his “atmospheric” house to hear a reading of his will. Christian Elliott provides live musical accompaniment on the Paramount’s Mighty Wurlitzer Organ. The screening will be followed by a CineClub gathering in the Paramount lobby bar, hosted by Dr. Jennifer Bean, University of Washington chair of cinema studies. — M.U.

When we first meet her, newly hired TV-series writer Lucia is riding high on an identity-politics horse. People who look as though they speak Spanish, she feels, ought to speak Spanish (“We should be militant about speaking our mother tongue”). She’s quick to take offense and just as quick to give it. Care-worn, level-headed Abel — the Mexican-American janitor who cleans her office at night — has limited patience with her at first (“You’re a brat”), but as their relationship develops, it looks as though he might be able to help her overcome her deep insecurities and smooth some of her more jarring edges. His humble East L.A. background might also provide her with useful material when it comes to pitching story ideas to her bosses. With the play Fade, television writer Tanya Saracho (Looking, Girls, How to Get Away with Murder) sets up a thorny push-pull dynamic for two actors that gives them both a real workout. Ana María Campoy, as Lucia, gets on your nerves, even as you think she might find her better self if only she could win a little success in the game she’s playing. Marco Adiak Voli, in a warm, soulful, melancholy performance as Abel, is the anchor of the show, providing a baseline decency that Campoy’s Lucia repeatedly tests. Fade, which seems at first a pure “issues drama,” delivers some unexpected twists. — M.U.

Peacock in the Desert: The Royal Arts of Jodhpur, India

Any exhibit that starts with a life-size replica of an elephant-led wedding procession and a wall-sized installation of colorful turbans has me jumping on board. This traveling show organized by the Mehrangarh Museum Trust of Jodhpur and the Museum of Fine Arts, Houston, is “the largest collection of objects ever to leave India,” Seattle Art Museum director Kimerly Rorschach said at last week’s press preview. It also, according to Mehrangarh Museum Trust director Karni Singh Jasol, offers “a microcosm” of multicultural, multilingual India, rather than “a study of one specific kingdom.” He adds: “India is about colors. It is about senses — about flavors. We are not gray and black.” That’s an understatement.

Spanning five centuries, Peacock is an eye-popping look at a royal-family legacy. It uses video, audio and room-filling installations, along with dozens of fantastically detailed paintings (magnifying glasses are provided so you can study them closely), to immerse you in its world. The installations include such “portable architecture” (Jasol’s words) as an 18th-century gilded palanquin, a roomy 17th-century court tent and a brightly painted 19th-century wood leisure pavilion. You’ll also find a throne, a swing, a shrine, a “Cradle for Krishna,” and much more. Artifacts include spectacular jewelry and lethal weaponry (the “punch daggers,” which fit on your hand like brass knuckles with pointed blades protruding from them, look particularly nasty). Among the smaller, more unexpected treasures are an early 17th-century ink-brush drawing, “The Emperor Jahangis with a Falcon,” that has a quick-sketch liveliness to it, and two silver foot-scrubbers with peacock handles. The emphasis throughout the show is to tune you into the living aspects of an ancient tradition. — M.U.