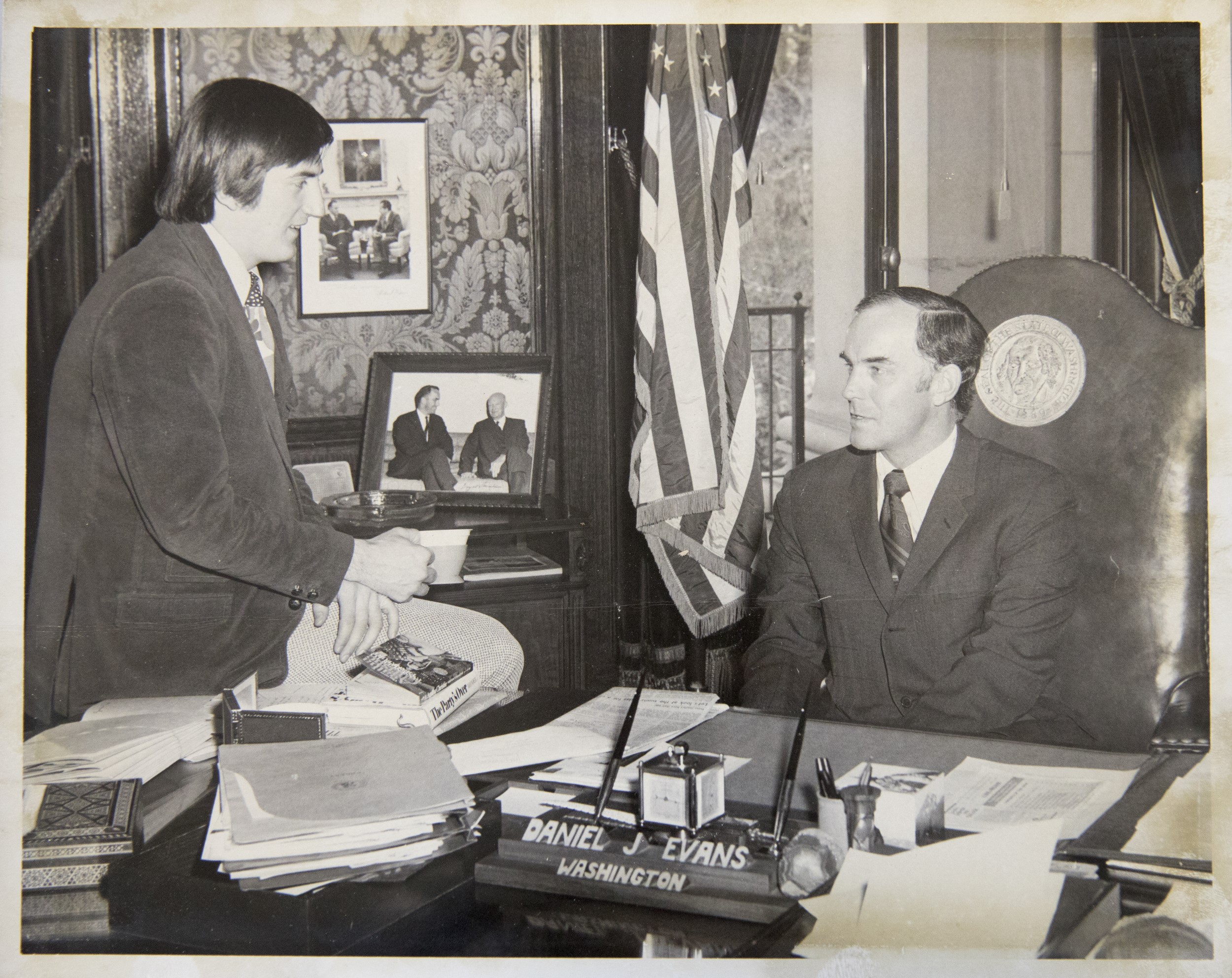 Stuart Elway, left, in 1972 with his boss at the time, Republican Gov. Dan Evans. (Courtesy of Stuart Elway)

When looking at trends in Washington state elections, no one has a better perspective than H. Stuart Elway. The longtime Seattleite has worked as a non-partisan pollster since the mid-1980s and has tracked trends every year since under the shingle of Elway Research. Earlier this year he teamed up with Crosscut to produce polls regularly looking at statewide voter attitudes.

Today Crosscut is releasing the complete results of the first of those polls. It’s a new day for the pollster, but one that is very familiar.

Elway has grown up literally immersed in state politics. His father, Harry, was mayor of Hoquiam and a state legislator. Stuart was largely raised on his father’s campaign trails and under Olympia’s Capitol Dome in the 1950s, earning the title of honorary page from the state Legislature at age 7. His biggest secret: NFL star John Elway is a first cousin, but Elway is discreet about wearing his Bronco’s gear on game days.

Stuart came of age as a liberal “Rockefeller” Republican, spent the late 1960s as a campus activist, and later served as an aide to liberal GOP Gov. Dan Evans during a stint between college and grad school. “Evans’ instruction to us was, ‘What is the right thing to do?’ It wasn’t ‘Screw the other guys,’” he remembers.

That attitude of fair-mindedness has shaped Elway’s engagement with politics ever since. He decided that he wasn’t interested in running for office like his dad. Instead, after earning a doctorate in communications from the University of Washington, he sought to better understand how our democratic republic operates, a process he describes as when “strangers come together to work on common problems.” His polling sheds light how we do that and, increasingly, how we fail to do that.

In his new Crosscut/Elway Poll, Elway finds shifts in the 2018 electorate that reveal voters to be more partisan and less optimistic than in times past. What he doesn’t see, he says, is definitive signs of a “Blue Wave,” though the Democratic advantage in the state has become “baked in.”

As for partisanship, it has been a real ongoing trend for the last two decades. As late as 2000, Washington was still on the list of “battleground” states nationally, he says. No longer. It’s now reliably blue instead of purple in terms of national and statewide politics.

That Democratic trend promises to intensify, as the Puget Sound area’s share of population growth between now and the 2020 census is predicted to be enormous. Fifty-four percent of the state’s voters are already in the largely Democratic-voting Puget Sound region. An estimated two-thirds of the state’s projected population growth of 700,000 will settle in the area from Everett to Tacoma, a development that is likely to exacerbate the urban/rural political divide.

But, Elway notes, things are still much more evenly divided at the legislative level, which reflects a more traditional balance in state politics. In the “olden days” both parties had bigger tents and voters were more independent and willing to vote for candidates in either party. Elway still has a rare campaign button from 1968 that advocates a vote for Republican presidential candidate Richard Nixon and liberal Democratic Washington State Senator Warren G. “Maggie” Magnuson. Nixon-Maggie is about as bipartisan as one could get.

Elway has many numbers in his head and is quick to cite the wonky details that are the meat of politics. In 21 of the state’s 49 legislative districts, all three elected are from the GOP (two state representatives and one senator), while 20 have three Democrats.

“The Legislature couldn’t be any more split,” he says.

Only eight districts are represented by members of both parties (districts 5, 19, 28, 30, 35, 41, 44, 47 — see all the districts here). All eight are in western Washington, and seven of them in the Puget Sound area. If there is a blue wave, these swing districts are where to look for it. Party ID in these districts is 37percent Democrat, 33 percent Republican and 31 percent independents.

Elway has seen a surge of people identifying as independents over the last decade, and general declines in party affiliation for both Democrats and Republicans. In the latest poll, Democratic party ID is at about 38 percent, GOP 28 percent and independents or no-answer respondents adding up to 35 percent. He says he was surprised that the Democrats had fallen below 40 percent. But, he says, many independents break Democratic in their voting.

Elway suggests that many people are disgusted with partisanship and don’t want to be pegged with party baggage. There is increasing animosity between the parties, and the politicians play to their bases, not the middle. “Demonization of the opposition is new in the sweep of things,” he observes.

“In a heightened partisan atmosphere compromise becomes unattainable,” Elway says. “If I could wave a magic wand to change the political system I would make every district competitive. It would change our politics profoundly.”

Another change in voters that Elway has seen over his career is a move away from picking a party by philosophy. Ideology is driven by disagreements with the other party, he says. As an example, he points out that the national GOP used to be suspicious of the Russians and pro-FBI. Now, under Donald Trump, they’ve flipped to the opposite. He says he’d like to explore these dynamics more deeply in the future and he has a good baseline; his doctoral thesis at UW was on the complexities of party identification.

Optimism is also in decline, Stuart says. In the new poll, which was conducted earlier this month on 405 registered voters, Republicans indicate that they are most optimistic about the future of the nation, as Democrats were during Barack Obama’s presidency. On an optimism index running from a pessimistic 1 to a peak optimism of score of 8, GOP voters rank 1.49 while Democrats are a lowly .91. Independents are at 1.29. No group has ever broken 3, Elway says. Men are more optimistic than women, while the least optimistic about our national future are the best-educated, those who went to grad school. They rank a glum .45.

It wasn’t always thus. In 2000, an Elway survey of Pacific Northwest voters indicated an upbeat mood about the future. “Large majorities of people think that progress is being made on a wide variety of issues,” summarized the Seattle Times on the results of Elway’s poll. “And it was not just the economy, most people cited progress in their communities on crime, education and race relations,”

The new century has gotten much more mixed reviews, according to the polls.