An atlas of Seattle's soul

New book of graphs and maps capture Seattle's quirky self. 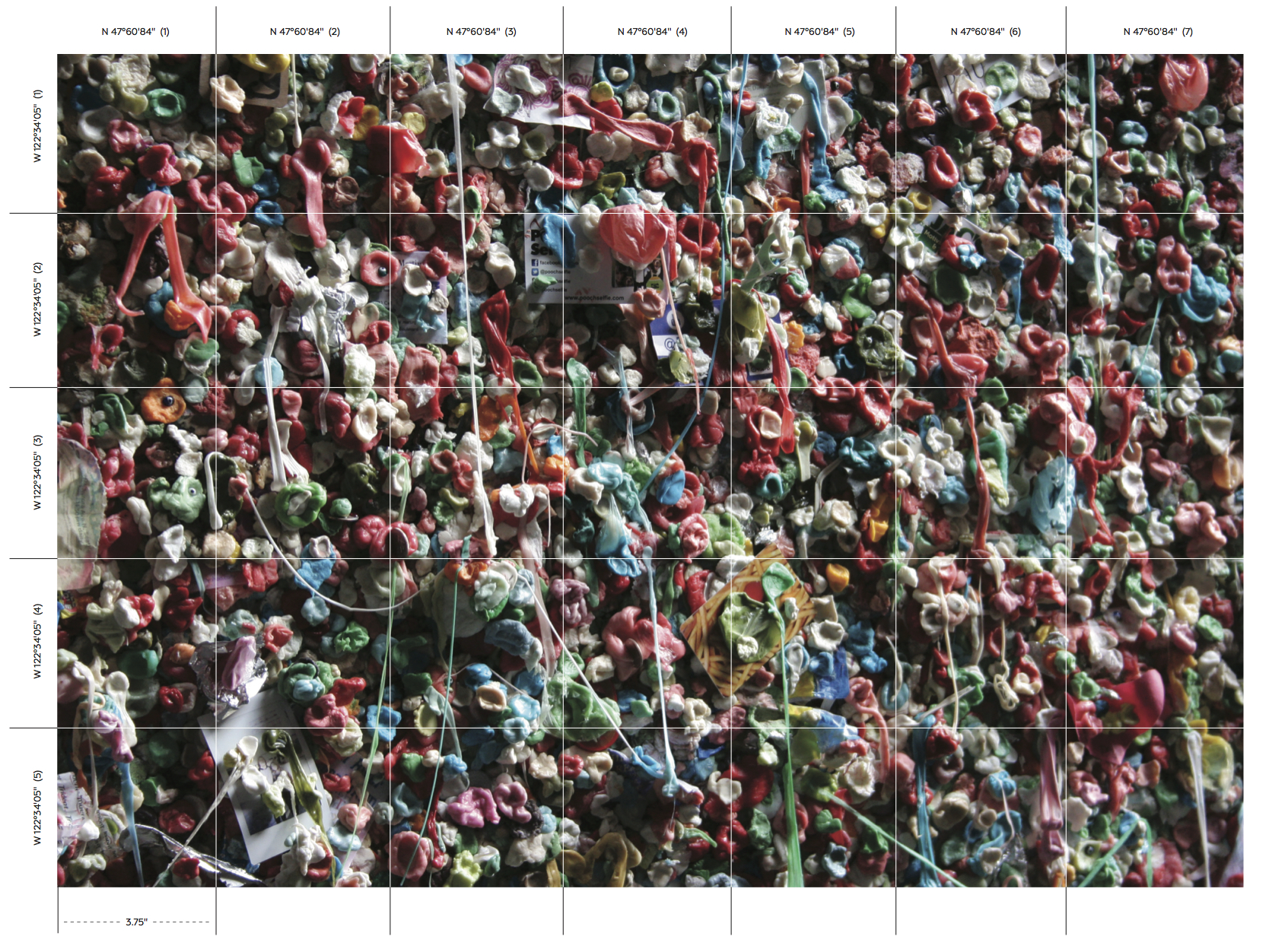 A diagram of the gum wall from the book Seattleness. (Courtesy of Sasquatch Books)

I have long been a fan of large compendiums — day books, miscellanies, table books, atlases and fact-stuff almanacs.

Give me a book like an overstuffed attic or storage unit, and I am content. For a while.

Give me such a book about Seattle and I am a happy explorer on home turf. For a while.

Such a book is Seattleness: A Cultural Atlas by Tera Hatfield, Jenny Kempson and Natalie Ross, published this fall by Sasquatch Books. It’s an oversized book, but not too huge, but heavy in hardback and dense with data. So dense that at times I could have used a magnifying glass.

Many writers have attempted to capture the city’s essence between covers. Writers in fiction and non-fiction have tried to flesh out the essence of Seattle and the Northwest: Murray Morgan, Bill Speidel, Emmett Watson, Nard Jones, Betty MacDonald, Jonathan Raban, Maria Semple, Roger Sale, Jim Lynch, Paul Dorpat, Sherman Alexie, Tim Egan, Jamie Ford, David Guterson and so on. It’s a moving horizon, never quite reached, but every attempt brings something new to the city-watcher.

Which is the appeal of Seattleness. It feels like a novel approach and one also suited to the changing city. The authors of this book are digital and graphic designers who have studied mapping, geography and creating environments.

Which is a reason capturing the city’s essence in print is so difficult: the physical and cultural environment has always been changing and growing, never more rapidly than in the 21st century. As we wrestle with that growth, as newcomers outnumber native born, as technology and industries and aspirations shift, the “is-ness” of the city of cranes is mutable, though not the belief that we can capture it and reveal it. 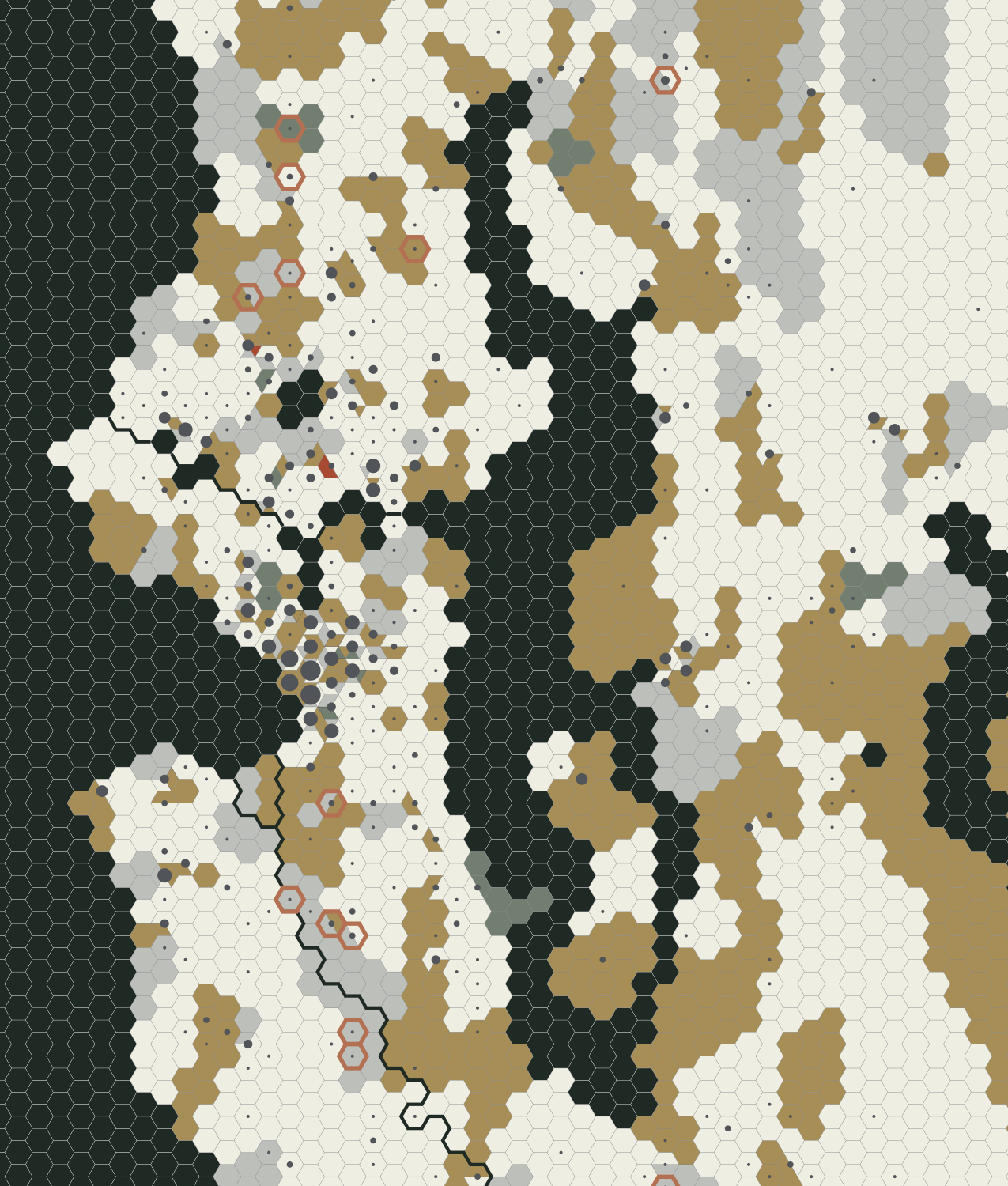 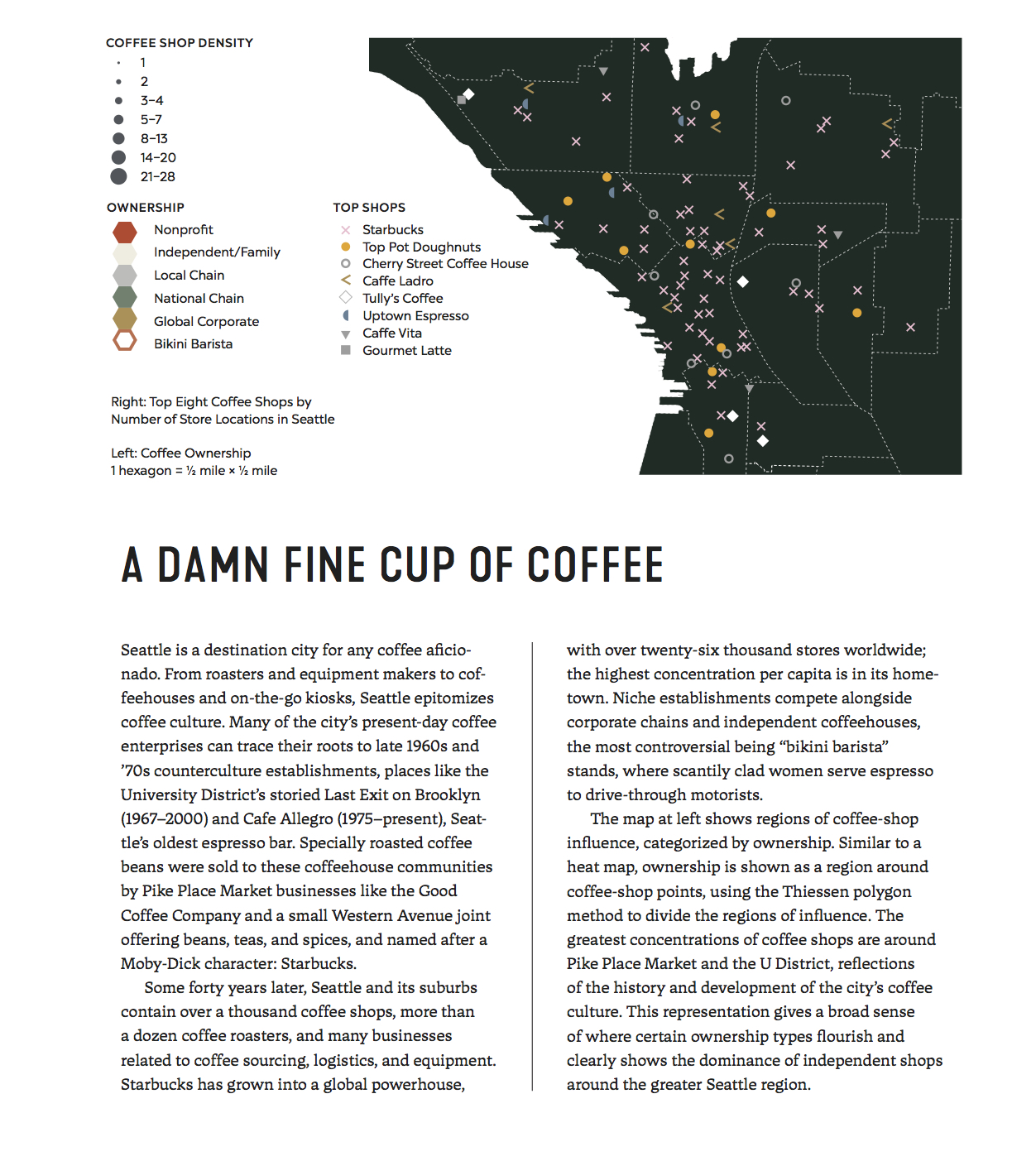 In his introduction, New York Times geographer and graphics editor Tim Wallace writes that the book will “nudge you in countless ways and challenge you to see the city and region through new, crisp, and yes sometimes even warped lenses.”

The main tool for the fresh look is infographics. We live in a tech city that at one level loves, or says it loves, measurables. Show us the metrics! Show us the data! Give us web-friendly graphics! This book is a collection of intriguing — and often beautiful — images designed to convey significance through artful and original charts, maps and graphs.

Can Seattleness really be so reduced? 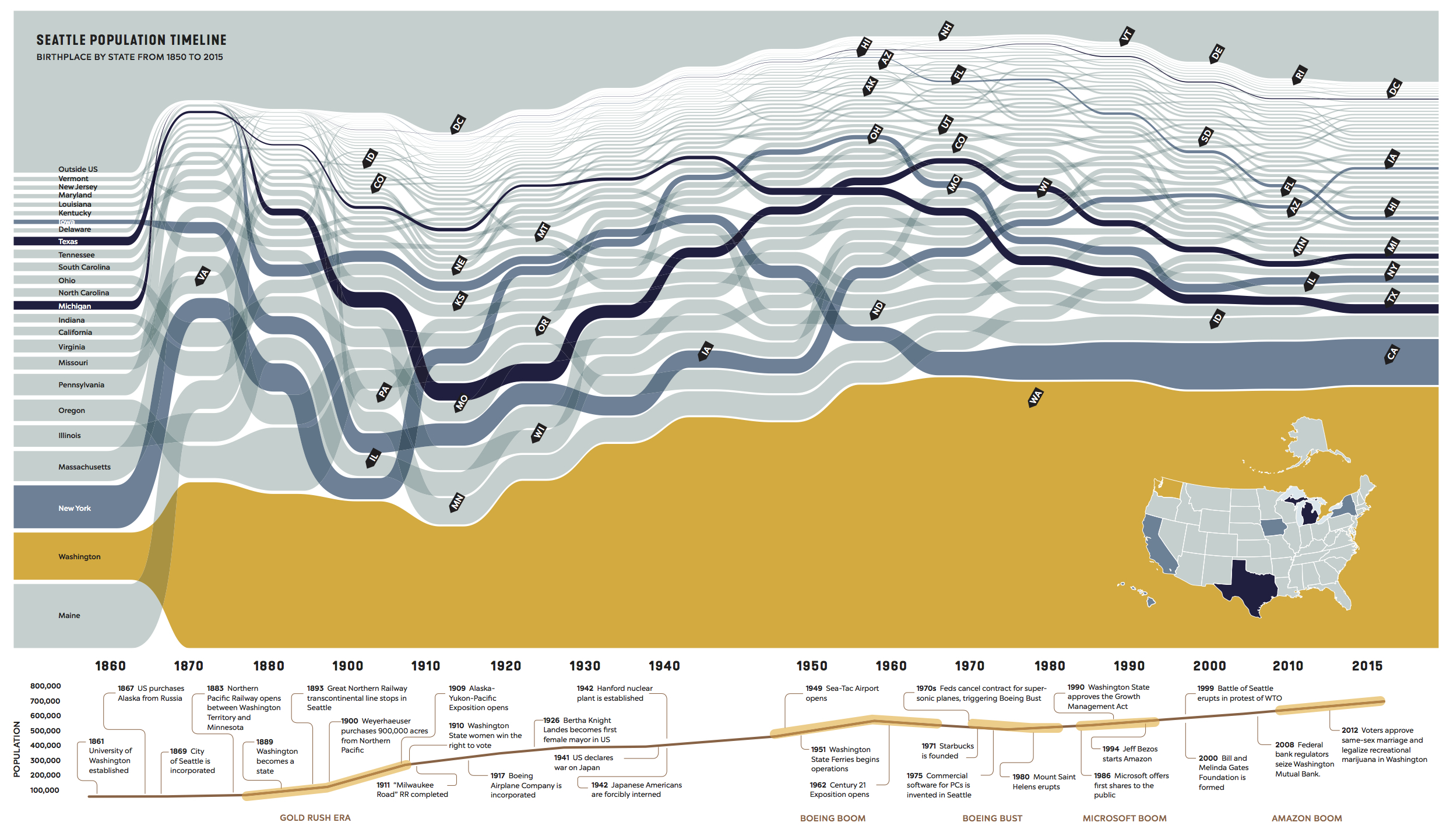 Some lay out what we all know in detail. We all know we’re growing, right? Seattleness gives us computer generated visual models of all the downtown high rises past and present — a dramatic way to document our growth spurts. A graphic then zeros in on Fourth Avenue downtown where we watch the past being whittled away like that scene in the movie of H.G. Wells’ Time Machine where the traveler watches cities rise and fall in time lapse on his ride into the future. You get a grip on the pace and impact of change in one city block.

A few pages on, we see through warped lenses to learn the intimate secrets of the Gum Wall in the Pike Place Market’s Post Alley. There’s a color chart that tells us what flavor of gum was used on the wall, and where those flavors cluster (spearmint and berry flavors seem to be prevalent, not so much Polar Ice.) You’ll never quite look at the Gum Wall the same again. It’s like a forensic analysis of Seattle quirkiness. 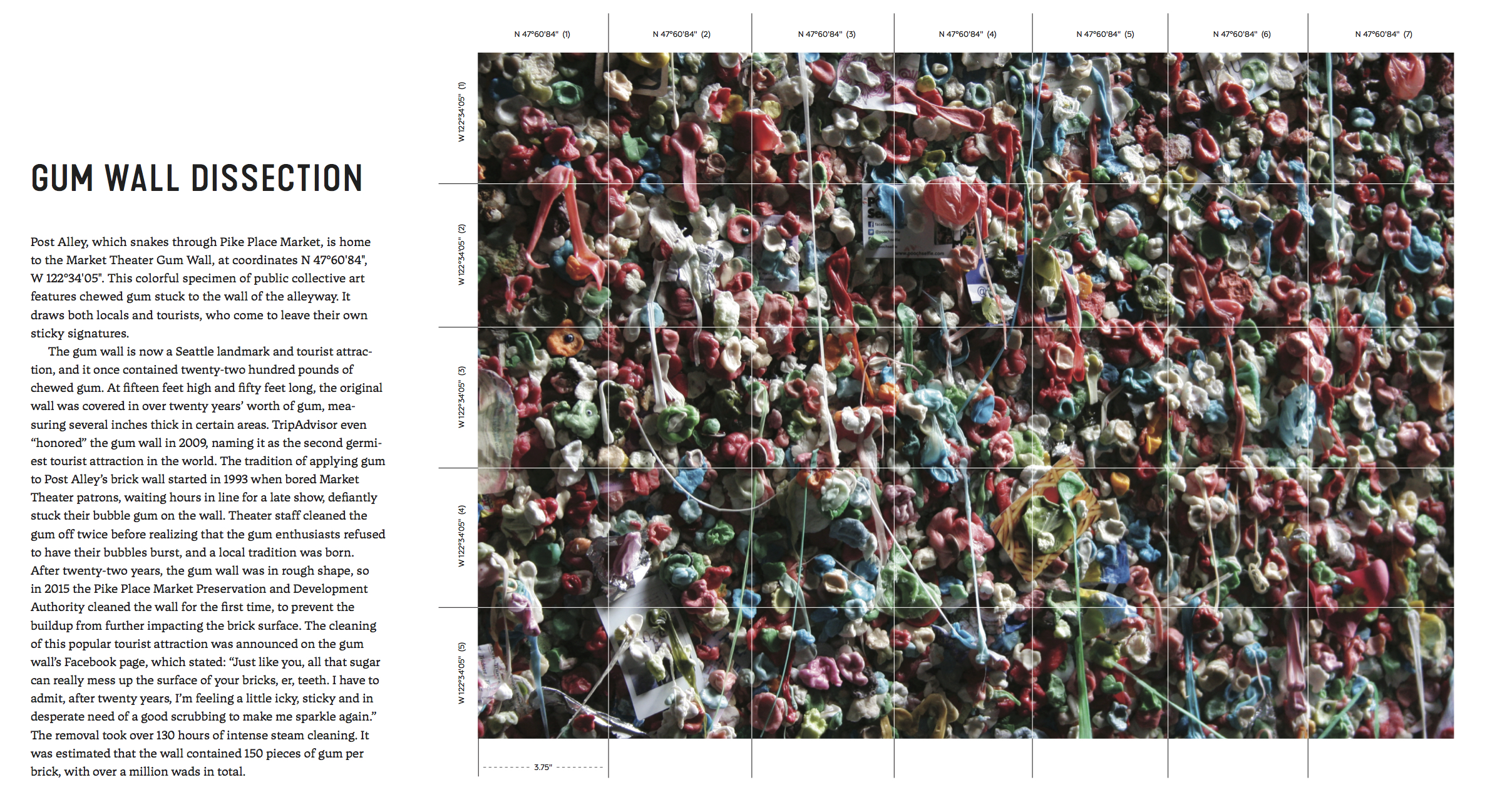 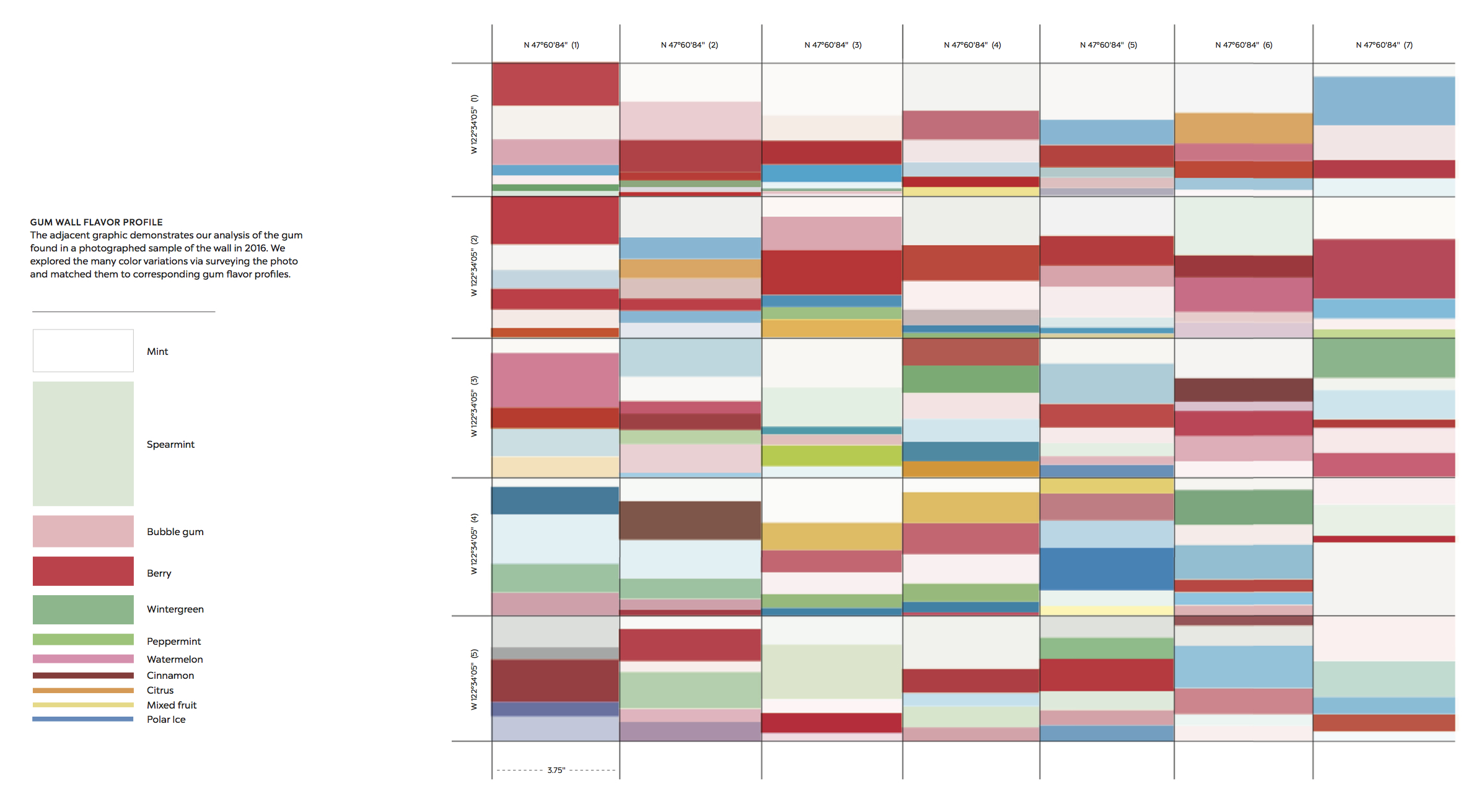 Is the Gum Wall enlightening about our nature? I doubt it, but compendiums like this are triumphant, often, for their bizarreness — like walking a carnival midway at a world’s fair: You calibrate reality between the high-minded and the low-brow, the space age exhibit and the six-legged lamb.

Speaking of fairs, another chart shows a pair of graphics contrasting the exhibits and themes of Seattle’s two expos, the Alaskan Yukon Pacific Exposition of 1909 and the Century 21 Exposition of 1962. The overview is stunning as each image makes the fair chart look like a sunburst—not unlike the top of the Space Needle tower as seen from directly below. From a practical standpoint, though, the book is too small to contain  its ambition with nearly zero utility, and the type is nearly microscopic. To really appreciate you’d need to see it as an interactive of a large computer screen, or at the least a wall poster.

Which brings me to the problem with the book: There is so much data and such limited space to spread it out. I kept thinking this book would have been better in another or grander format, like my old New York Times atlas or on a big digital screen. It seems designed to delight the young tech worker, but will this person actually buy a book on paper and read it this way? A Kindle wouldn’t do it justice either. 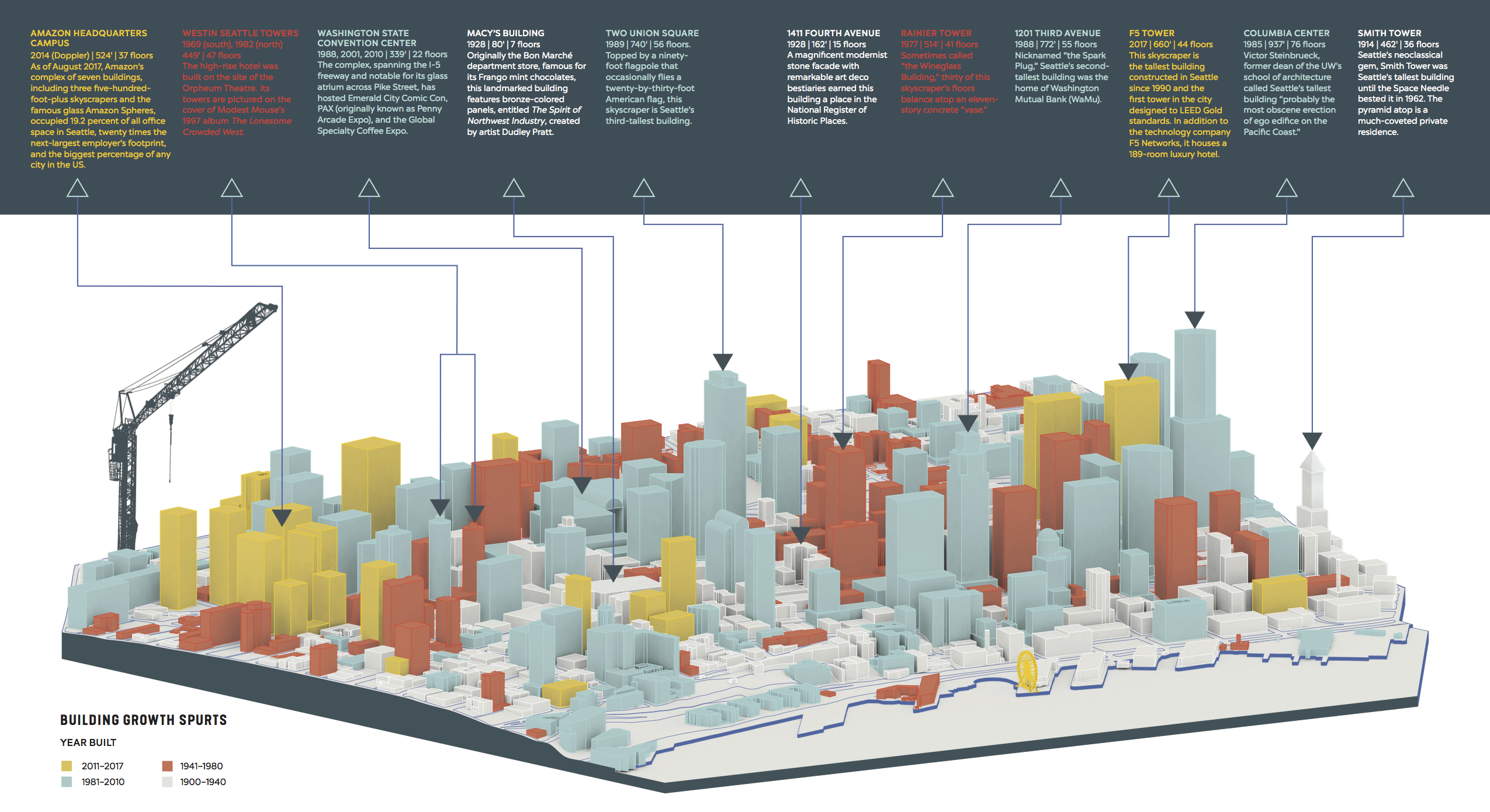 Still there are many cool things in it — often with a page of text to offer an introduction, then a graphic. The relative steepness of Seattle’s downtown hills, for example. A plaid map of grunge spots in the city that resembles a map of Scottish clans (it would have been better to use plaids taken from Chubby and Tubby flannels). A guide to understanding the imagery on the Pioneer Square Tlingit story pole. A useful stab at mapping Seattle’s microclimates. It rains more in Wallingford than it does in Madison Park. Does that matter or explain anything? Who cares? Save it for Trivia Night.

I’m not sure that Seattleness captures Seattle’s essence. I think tackling it with data is interesting and sometimes enlightening. It’s fun to dip in and out of. And some of the graphics are beautiful. It belongs on your Seattle bookshelf, eminently browsable, a reference to the random. It’s a worthy addition to the errand of trying to capture a moving culture with new ways to look at it, but it won’t answer the ultimate question of who or what we are. The truth isn’t necessarily in the details, but the details can be very interesting.

Disclosure: Sasquatch Books was the publisher of my book Pugetopolis.