Carbon Fee: 'For once, this was done right'

In Lacey, tribes and environmental groups rally together for the carbon fee.

Northwest tribes and supporters protest at the Western States Petroleum Association building during and I-1631 rally in Lacey, Washington, Oct. 17, 2018. (Photo by Matt M. McKnight/Crosscut)

On the sidewalk outside the office building of the oldest petroleum trade association in the United States, Nisqually tribal council member Hanford McCloud took to a makeshift stage. He addressed an audience of more than a hundred through a megaphone, pointing at the nearby building while he spoke. That building, he told them, was why they’d gathered in the first place.

“You are who you are waiting for,” McCloud said. “Ain’t nobody else going to do this work.”

The rally outside the Western States Petroleum Association in Lacey on Wednesday was more than a gathering of supporters for Initiative 1631, the carbon fee that promises to financially support the Washington communities most affected by pollution. It was proof that Washington tribes and environmental organizations could work in tandem: The First American Project, a coalition of Washington Native American leaders, came out in support of the carbon fee after securing a guarantee that 10 percent of money pool generated by the fee would go to tribal climate mitigation projects.

Supporters wore costumes with replica wind turbines on their backs in support of clean energy, played music and spoke in support of the proposal that Washington voters will decide on November 6. Dave Archambault, former tribal chairman of North Dakota’s Standing Rock Indian Reservation and a key leader in the Dakota Access Pipeline protests, came to Lacey to add his support.

“I think that 1631 is a key that’s necessary for us and future generations, because it says that no longer will consultation suffice,” Archambault said. “It’s asking that corporations who are proposing projects and seeking investments… meet with tribes and get explicit consent from those tribes.” 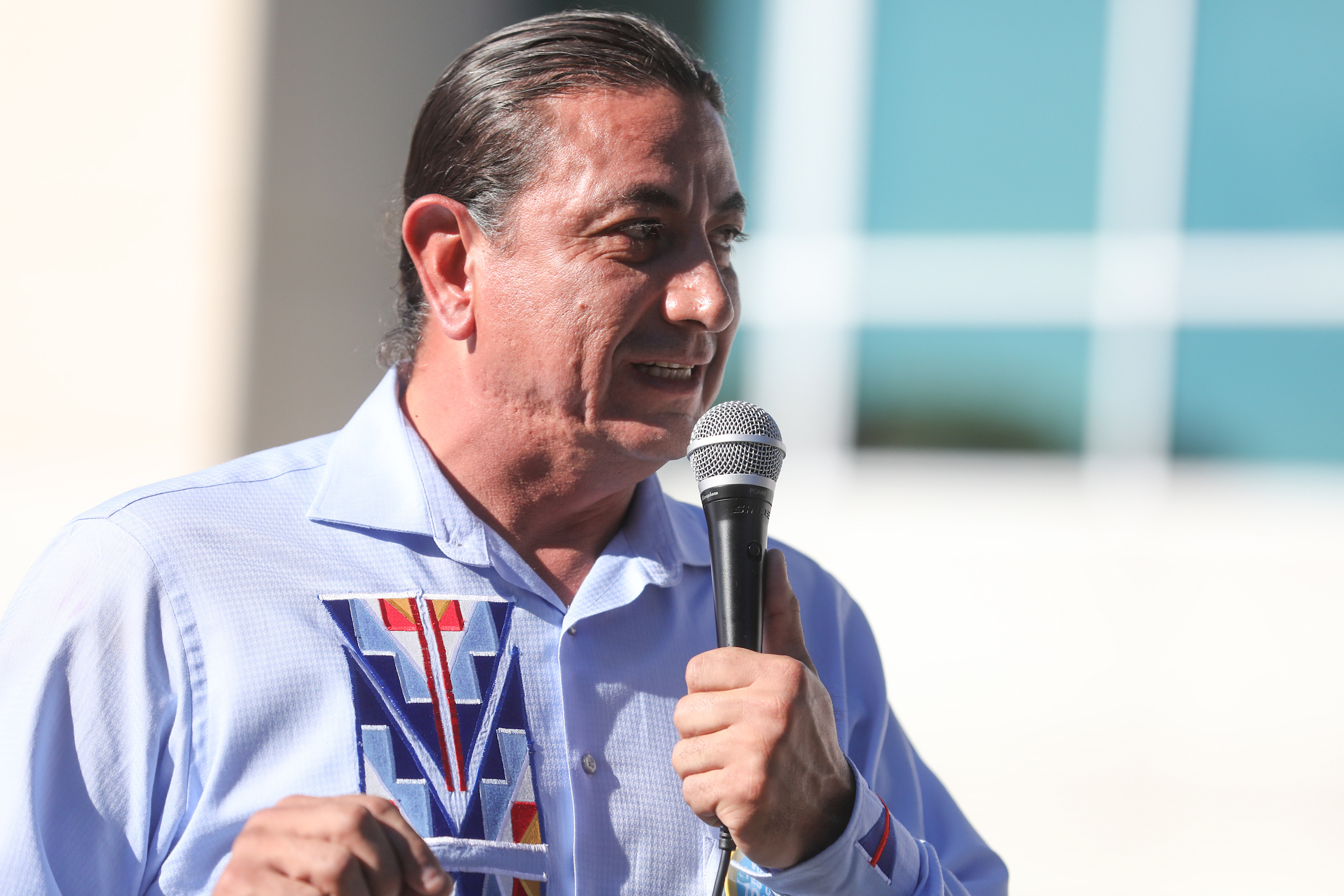 While a recent Crosscut/Elway poll reveals more support behind Initiative 1631 than 2016’s similar 2016 carbon tax, it’s also clear that better-funded carbon fee opponents are using their $20 million to increase efforts to persuade voters to vote ‘no.’

“The petroleum industry in Washington supports well designed, market-based programs to reduce greenhouse gas emissions,” the WSPA said in a statement to Crosscut. “Unfortunately, what I-1631 would impose in Washington will not meet the intended carbon reduction goals and, according to the Washington Policy Center, raise costs on consumers and industry. The better path to decreasing greenhouse gas emissions in the state is to reject this ill-conceived initiative and for interested parties to work together on a market-based program that provides real GHG reductions with cost certainty.”

The WSPA’s renewed push is part of the reason why Matthew Randazzo, campaign manager for the First American Project (and a critic of 2016’s carbon tax), thinks it’s a good idea to rally in front of the Western States Petroleum Association in the first place: He wants to show both who’s behind much of the No On 1631 campaign funding and put a face to who’s supporting the carbon fee.

“There’s multi-tribal support for this specific proposal,” Randazzo said. “For once, this was done right. This was done with legitimately detailed outreach over a longer period of time… it’s receiving unprecedented support because of this.”

This time, tribes weighed in early on. Quinault tribal leaders penned a letter back in September 2017 detailing concerns that the carbon fee as written did not ask enough of emitters and that too little of its revenue would go to environmental projects. They’d planned to submit their own carbon-cutting proposal if nothing changed.

By the following December, they’d reached an agreement with the Alliance for Jobs and Clean Energy, the authors of the initiative, and have been major proponents. The First American Project emerged from those successful discussions.

Randazzo says that The First American Project was modeled after a similar coalition of tribes formed in advance of the 2000 election called the First American Education Project. Back then, tribal leaders successfully came together to support the election of Maria Cantwell for senate.

Unlike that coalition, however, Sharp says that this group will stay after the election is over. Passing a carbon fee is its first goal, but she hopes to pursue other big projects once that’s done.

“We’re intending that I-1631 is just the first step,” she said. “We want to reawaken the power of tribes when we come together, united.” 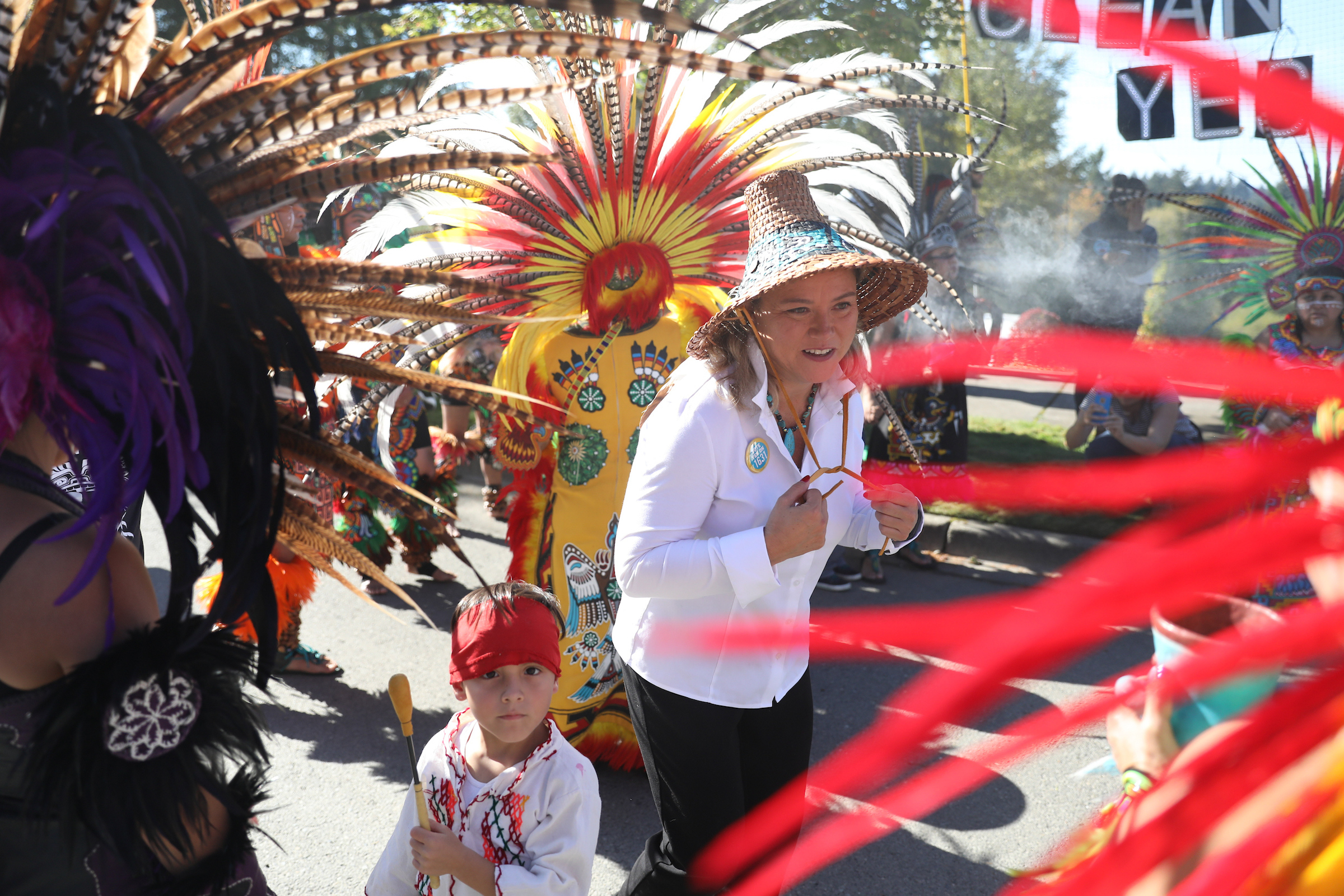 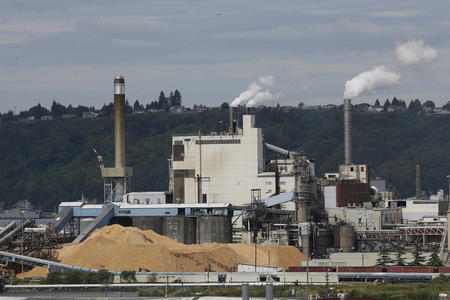