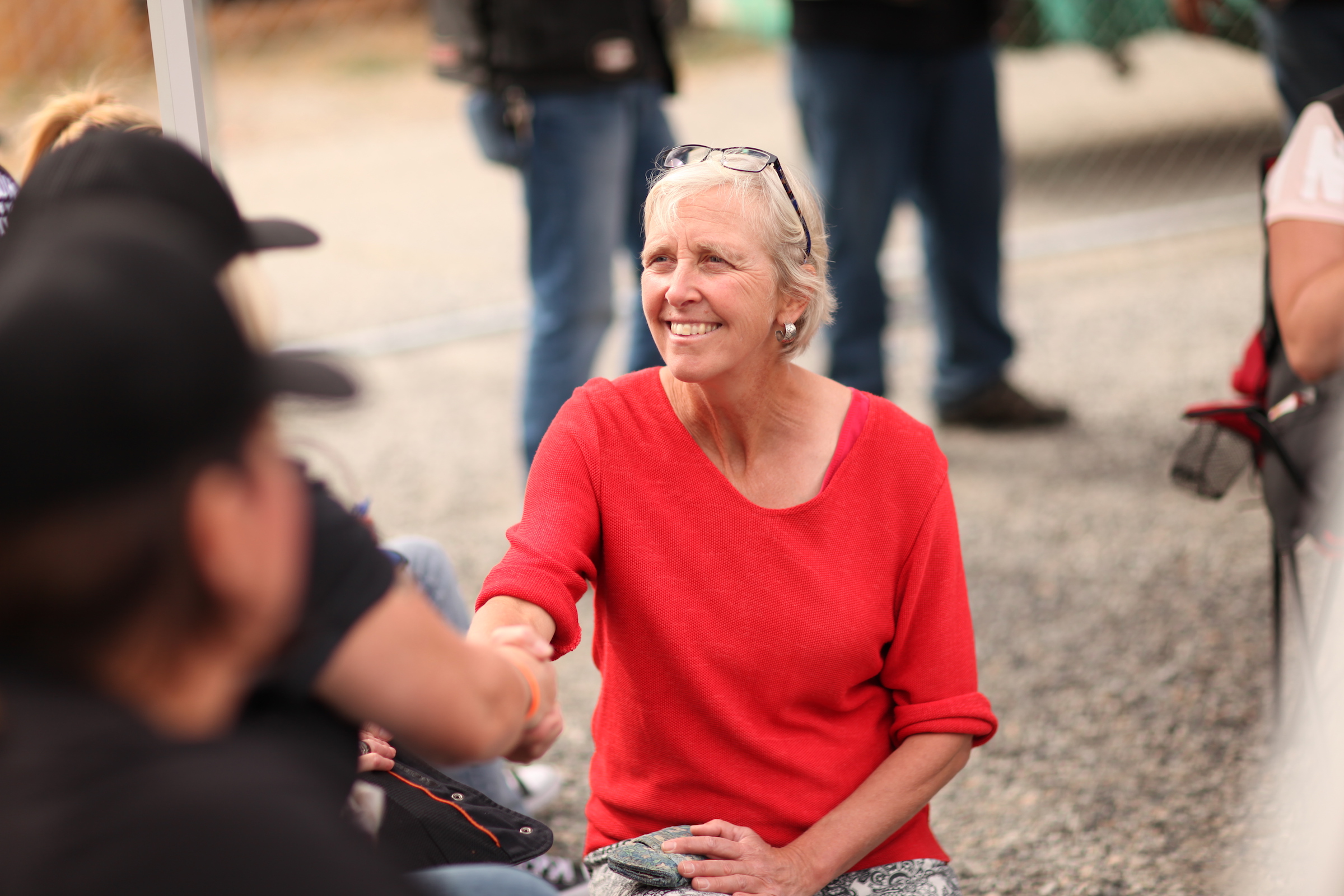 Chris Vance introduced country doctor Ann Diamond to the fledgling Washington Independent Party in March. But by that point she had already been running as an independent candidate for Washington’s state legislature for five months.

Vance, co-founder of the Washington Independent Party, was thrilled because Diamond was well-funded and had a solid campaign in place when they first met. He found in Diamond what he had been looking for: a serious candidate for the party that is Independent with a capital “I.”

Founded by Vance, the former Washington Republican Party chair, and former Democratic U.S. Rep Brian Baird, the state’s Independent Party is designed to appeal to moderates who are unhappy with the committed ideologues and what he views as extremists influencing both the Republican and Democratic parties. “A lot of Americans are sick of both parties,” Vance said.

But Diamond is an independent with a small “i.” To her, being an independent means she is not beholden to any political party, even the Washington Independent Party Both sides are still trying to figure out the details of how a small “I” independent would co-exist with a the big “I” party. However, she has still become the poster woman for Washington’s independents — both “I” and “i.”

The semantics are nuances that will have to be chewed over if Diamond actually becomes the first independent elected to the state Legislature in Washington’s history.

Diamond, 56, is a resident of the north Cascades community of Winthrop, isolated but increasingly popular as a getaway for Seattle area residents. And after surviving Washington’s top-two primary vote in August, she is the only state-level candidate in the general election who doesn’t identify with either major party.

She is running against Keith Goehner, a traditional, rural Republican who lives on a 92-acre orchard near Dryden, southeast of Leavenworth. Both are long-time fixtures in the area — he as county commissioner and she as a physician.

Is Diamond part of a bigger national trend, as Vance sees it, of people unhappy with both parties? Or is she destined to stand alone on the state’s political radar?

It is hard to tell.

Diamond picked up 30.4 percent of the primary votes, compared to Goehner’s 44.7 percent. That’s a substantial gap to bridge. If Diamond were to have won all the votes that went to the Democrats' primary candidate, her total would go up to 45.8 percent. But the Republican primary vote, with a second GOP candidate, was 54.2 percent of the primary total.

Still, she is over-performing expectations. Independent candidates are often pigeonholed as fringe people who get 1 or 2 percent of the votes, said Vance.

Ben Anderstone, a political consultant who studies Washington’s political demographics, agreed. And Anderstone — who occasionally writes for Crosscut — is impressed with Diamond’s 30 percent showing, unusually high for an independent.

But, he said, “It looks to me that this is more about Ann Diamond than some local rebellion against the party system.”

Whatever the reason for the candidate's success, both Vance and Diamond are optimistic. “So, by now, they know she isn’t a kook,” Vance said. Diamond said: “I won in my own county, so people in my county don’t think I’m a fringe candidate. Making it through a top-two primary should show I’m a viable candidate.”

Anderstone noted that she collected 67 percent of the vote in the Methow Valley, where she lives. But he also noted that the valley is the most Democratic segment of the 12th Legislative District, which consists of Chelan and Douglas counties, plus parts of Grant and Okanogan counties. The biggest population centers are Wenatchee in Chelan County, which posted a slightly Republican majority in the primary, and the twin towns of Omak and Okanogan in Okanogan County.

Anderstone, who does most of his work with Democrats, said, “The challenge is that this is a pretty Republican district. … This looks to be an uphill battle.” To win, he believes, Diamond needs to pick up some traditional Republican voters to win.

Alex Hays, a political consultant who works chiefly with Republicans, said an an independent needs to reflect the character of a district to stand a chance of being elected  — and believes Diamond does not meet that threshold. Hays suggested that Diamond is too far left of Chelan and Okanogan counties' mainstreams to be viable in November.

Vance has been impressed Diamond's fund-raising, which has run ahead of Goehner’s. She has raised $102,226 so far from individual and business contributions,  according to Washington Public Disclosure Commission records through September. In addition, the Washington Independent Political Action Committee — whose fund-raising and spending Diamond does not control — has allocated $47,914 to boost her campaign, according to PDC records. According to the PDC and an examination of the names of the group’s contributors), the group is affiliated with Chris Vance and Brian Baird's Independent Party. Baird is a contributor, as is the national Unite America, which is tied to the Independent Party.

Meanwhile Goehner has raised $54,479, including $3,500 from PACs. The PDC had not recorded any money being spent outside of his campaign in his support as of the end of September.

Diamond has been a community doctor for 24 years in the area, opening Winthrop’s first medical clinic in 2000. She recently sold it to a health care corporation, but still practices part time. She has also organized a long-time community market and is on Winthrop’s planning commission. Diamond said she was inspired to run against Condotta in 2017 when she approached him about an issue related to health care and he referred her to Rep. Eileen Cody, D-Seattle and chairwoman of the House Health Care & Wellness Committee.

She believes the district is ready for an independent, saying that one out of every three doors she has knocked on housed an independent voter.

If elected, Diamond plans to caucus with neither party in Olympia. In lieu of participating in caucus briefings and strategy sessions, Diamond plans to extensively read the bills and the nonpartisan legislative staff’s briefing memos that come with each bill.

Noting that the Democrats currently hold a 50-48 advantage in the state House of Representatives, Diamond hopes to become a vital swing vote in Olympia. However, conventional wisdom in political circles says the Democrats are likely to pick up some extra seats in November, with a major reason being a backlash against President Donald Trump.

Her vision of how she would work in the Legislature bears similarities to how former Sen. Rodney Tom, a Democrat from Medina, has operated in Olympia.

Tom represented the 48th Legislative District, east of Seattle, as a Republican from 2002 to 2006 before becoming a Democrat and representing the same district for two four-year terms. Tom, a centrist, has always been uncomfortable with the GOP’s social positions and the Democrats’ fiscal stances. In late 2012, he joined a Republican-dominated coalition to take control of the state Senate away from Democrats.

In 2014, he stepped aside from a re-election run, citing health issues for himself and his father. Now Tom has returned to take on his successor, Sen. Patty Kuderer, D-Bellevue.

Tom was viewed as a potential member of the Independent Party. He and Vance talked, but couldn’t reach an agreement. He is now running as a Democrat.

Tom does not want to caucus with either party, preferring to set up a separate centrist caucus. If he is elected, it's possible there would be a scenario of 24 Republicans, 24 Democrats and Tom, who would become a politically powerful swing vote. However, he has an uphill run against Kuderer, who received 60 percent of the primary vote.

State-level independents are loosely coordinated by Unite America, which was founded as The Centrist Project in 2013. The organization was created to provide donations and campaign support for moderate, independent candidates while stopping short of creating an official political party.

Despite her small “i” persona, Diamond has been willing to engage with the larger movement, posting Unite America articles on her campaign Web site.

Of the independent movement, Vance said, “Nationwide, it’s still new, it’s still small.” Voters in the 12th District will decide whether the movement gets an immediate chance to grow in Washington state.