Years in the making, the agreement gives officers a raise and skeptics something to worry about. 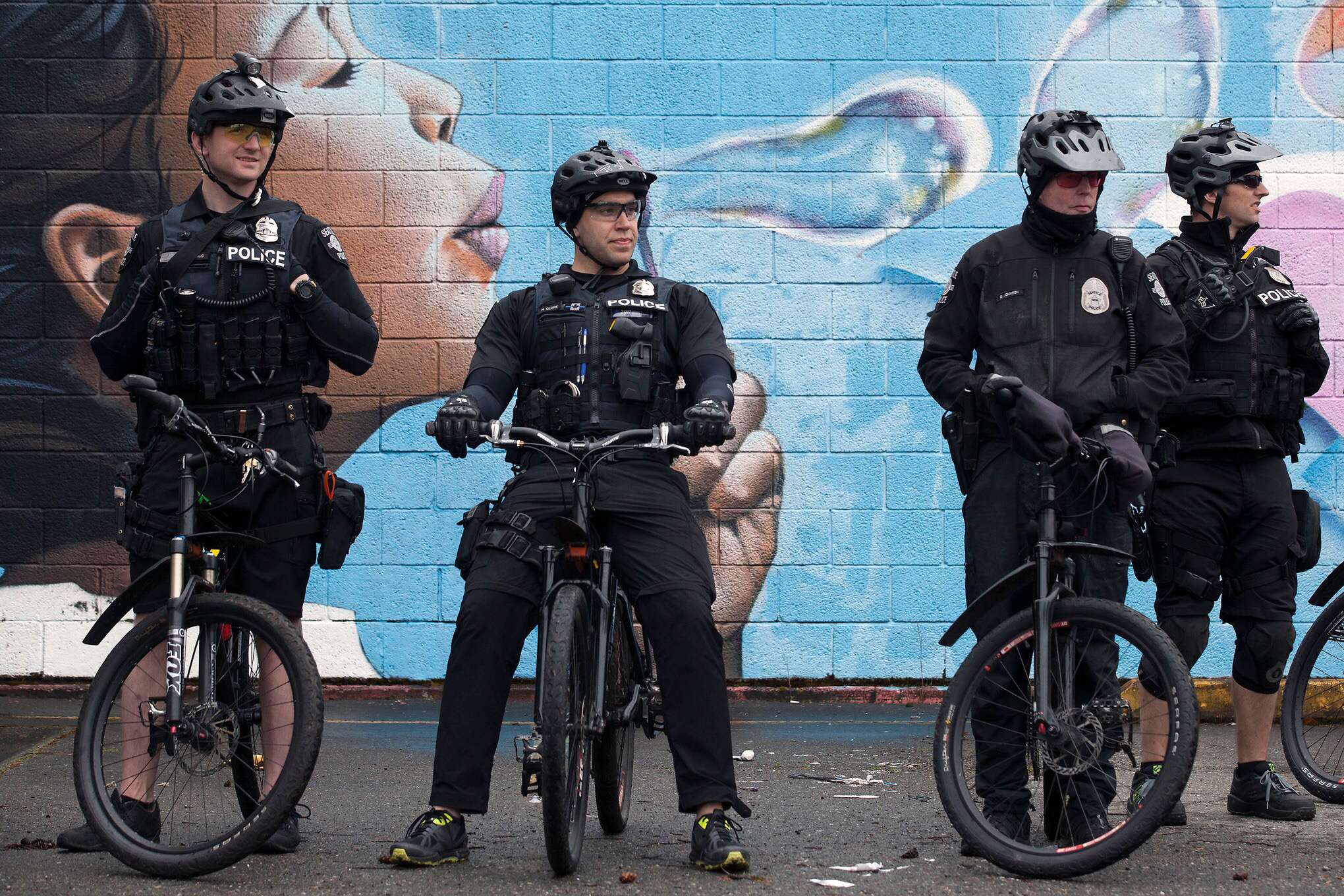 Seattle Police Department watch passing protesters during May Day demonstrations in Seattle on Monday, May 1, 2017. (Photo by Matt M. McKnight/Crosscut)

A grueling three and a half years after contract negotiations began, Mayor Jenny Durkan on Monday made public a tentative agreement between the Seattle Police Department’s rank-and-file union and the city, taking a major step toward clearing away a cloud that has been hanging over her administration, as well as the one before it.

If approved by the Seattle City Council, the contract would provide a bump in pay for officers, a move the city hopes will slow transfers away from the department and bolster its efforts to recruit new officers.

Beyond dollars, Mayor Durkan said Monday she believes the contract sets in concrete some of the reform efforts of the previous six years, many of which were spurred on by a federal consent decree mandating change.

The contract clears a path for full implementation of officer body cameras without protest from the union and puts more civilians in positions of oversight. The agreement, Durkan said in a press conference Monday, “makes it absolutely clear Chief [Carmen] Best and I will absolutely not go backward on reforms.”

But even as Durkan, Best and union president Kevin Stuckey stood shoulder to shoulder, the Community Police Commission, made permanent by the City Council to act as the voice of the community throughout the reform process, expressed disapproval. “From a review of the contract by some members of the CPC, it appears that the tentative contract gives up many of the reforms won in the landmark Police Accountability Legislation,” said a statement from the group, referencing the sweeping reform legislation passed by the city council in 2017. “That legislation was passed by the city council after a long struggle, with an 8-0 vote last year after receiving broad community support. The CPC was not consulted at any stage of the negotiation process regarding any of the substantive concessions we see in the tentative agreement.”

More information on the Community Police Commission’s issues with the proposed contract will not be coming until a Wednesday meeting. But the group’s comments appear to refer to language in the contract that would effectively nullify or alter some aspects of the accountability ordinance passed in 2017, widely hailed at the time as “historic.” In an appendix, the contract reads, “In the event there is a conflict between the language of the Ordinance and the language of the [collective bargaining agreement] … the language of the [collective bargaining agreement] or this Appendix shall prevail.”

One of the changes could come in the part of the contract dealing with the evidence that is required to fire an officer. Where the standard is now a "preponderance" of evidence, the contract raises the bar for dismissing an officer to a standard higher than that.

Another possible issue may include officers’ ability to use vacation when serving disciplinary suspension without pay.

Mayor Durkan, who as U.S. Attorney oversaw the 2011 Justice Department investigation that ended with a conclusion that the Seattle Police Department used excessive force, said she would work with the CPC after the contract is approved by the city council. But, she said, “I would never agree to an agreement that I thought was a step backward on any important thing for reforms.”

Taken together, the contract represents a raise of about 17 percent for officers — an accumulation of retroactive raises of 3 percent for 2015, 2016 and 2017, 3.65 percent for 2018 and, effective at the end of this year, a 3.85 percent pay raise. That makes Seattle police officers the best paid in the state.

Additionally, officers who wear body cameras will receive an additional two percent pay bump. The officers guild, which was pursuing an unfair labor practice complaint against the city for moving forward with body cameras without a contract agreement, has agreed to drop the complaint.

Leadership has claimed in recent months that the department has struggled with recruiting new officers, especially considering the increased cost of living in the Seattle area. “No one wants to pay for 2018 prices on a 2014 budget,” Best said Monday.

The contract also locks in several key pieces from the city council’s 2017 legislation. For one, the department’s internal investigations office, the Office for Police Accountability, will add civilian investigators as well as a civilian intake officer. The idea is that some complainants may feel uncomfortable bringing their issues to sworn officers.

However, this differs from the accountability legislation, in that the city will now decide the duties of the civilians in OPA, not the office’s director.

The contract also allows for more flexibility around what had been a frustratingly rigid 180-day statute of limitations for misconduct investigations. The time period is intended to prevent investigations from dragging on, but had also caused some instances of misconduct to go unpunished because the 180-day would continue to run, even when exigent circumstances disrupted investigations.

Now, the point at which that 180-day period begins has been clarified to reduce conflict over whether or not the statute of limitations has, in fact, run out. Investigators may request extensions to the timeline in light of new evidence or witnesses.

The contract also provides more authority to the chief of police to oversee transfers and promotions. The union has also agreed to withdraw all standing unfair labor practice complaints.

The Seattle City Council now must decide whether or not to ratify the contract. A timeline has not yet been set. When asked if she anticipated any issue with getting approval, Durkan answered, “No.”

A curveball in this whole process is how the federal judge overseeing the department’s overhaul will react. The city is in a wind-down period from its consent decree, with a year to go before the judge releases the department entirely from the agreement.

But the U.S. District Court Judge James Robart has long worried about what the collective bargaining agreement would mean for reforms — and whether the city was being essentially blackmailed by officers for reforms.

The contract is good until 2020 — which means negotiations on a new contract will likely begin anew in less than two years.