Behind each of the late Microsoft co-founder’s charitable investments lay a fierce curiosity about — and concern for — the planet that fed into historic conservation initiatives, using technology the way only he could. 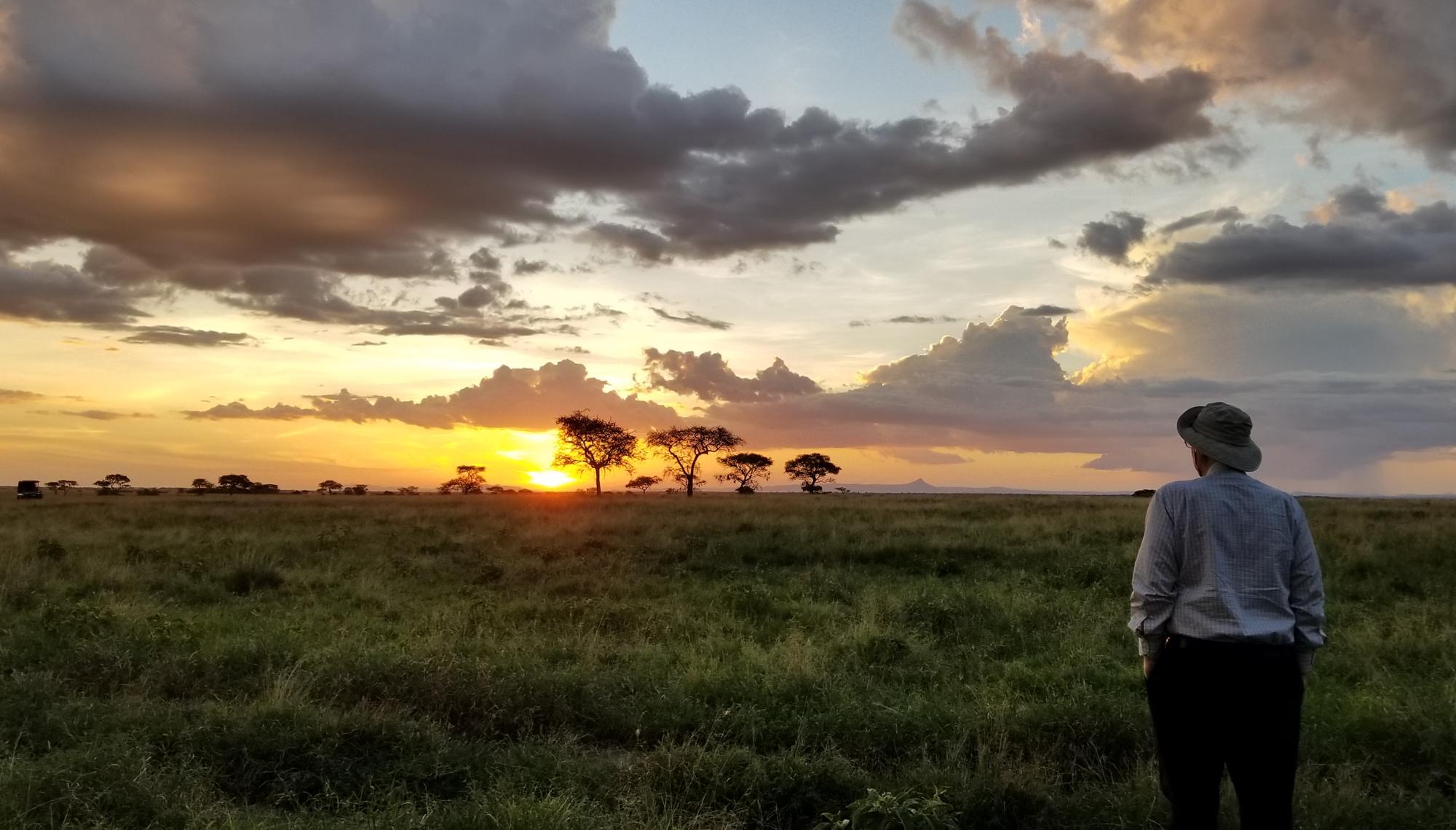 Paul Allen looking out over the Savannah. Credit: Courtesy of Vulcan Inc.

On the evening of Sept. 12, Orca Network Co-Founder Susan Berta got a call: A Seattleite wanted help IDing a whale pod he’d photographed while visiting Rosario Strait in northern Washington. But this was no ordinary citizen reporting an orca sighting: More than 200,000 followers could share in his enthusiasm for the famously endangered J-pod.

Lucky to get a show from these orcas today while out on the water! Incredible sighting off James Island. May have been the J Pod. pic.twitter.com/ReWhenfYUk

“We were excited: We’d never gotten a whale report from Paul Allen before,” Berta says of the tech billionaire. “We knew he was interested in orcas and conservation and other things, but had never worked directly with him… it was neat that he cared enough to want to know which whales they were.

“We didn’t know at the time that his cancer had come back.”

A little more than a month later, Allen — the celebrated co-founder of Microsoft and revitalizer of Seattle who donated billions to charities — passed away from non-Hodgkin’s lymphoma at 65.

“We were just shocked and saddened, but also felt a little comfort knowing he had spent a beautiful September day with the southern resident orcas,” Berta says. “It seems like whales have a way of showing up for people at the right time.”

Cataloguing all of Allen’s far-reaching personal and professional passions would be a difficult undertaking. But while he pursued tech-adjacent efforts to send people into space or crack the mystery of the human brain, some of Allen’s most earnest interests kept his mind occupied with an earthbound community that technology often leaves behind: the natural world.

In his well-traveled private life, Allen discovered a kinship with and concern for the natural world that many share. But he applied his famously analytical mind to quantitative initiatives meant to preserve a planet he’d helped to broadly transform. Paul and his team at umbrella-company Vulcan spearheaded some of the most influential climate and wildlife projects in human history — which friends say stemmed as much from emotional and moral imperatives as they did intellectual ones.

Crosscut reached out to conservation advocates, researchers, and Allen’s Vulcan colleagues to learn more about how his charitable support for environmental programs evolved from a personal passion into historic efforts to save the natural world — in a uniquely Paul Allen way.

“One of the unique things about Paul is that he has a personal investment in every single thing he funds,” says Dr. Sam Wasser, director of the Center for Conservation Biology at the University of Washington, who received two significant Vulcan grants for a project analyzing elephant ivory DNA in Africa.

For years, Paul’s curiosity about the natural world kept Dr. James Deutsch awake at night — in a positive way, he says. Deutsch left the Wildlife Conservation Society three years ago to join Vulcan as Director of Biodiversity Conservation.

“Those of us who worked for Paul would receive email messages at 2 in the morning because Paul had just read the latest article in Nature and wanted to know what we thought about it, and whether he could do something about the issue,” Deutsch told Crosscut the day after Allen passed.“That’s just how we worked — he was, like, scarily insatiable about consuming scientific information.”

One of Allen’s keenest obsessions was with elephants. He was struck by their extraordinary intelligence, their sociology, and their importance to the comprehensive African ecosystem. He visited with them on safaris for decades.

When he saw environmental injustice in person, his response was intense — especially with elephants. Allen’s investments in African anti-poaching projects, Deutsch says, “grew out of his direct experience visiting parks in Africa and seeing the decline of elephants and seeing the poaching crisis.” While developing a program in Tanzania to end wildlife trafficking, Allen flew to Tanzania to personally interview the eventual head of the unit in the field.

But while his love for animals is well documented, colleagues say Allen also considered whether humans suffered repercussions from environmental problems when deciding where to put his resources. Allen’s interest in coral reef remediation and protection, came from worries about the number of people dependent on reefs for their livelihood as much as a desire to continue diving in them.

Learning that as many as one billion people depend on reefs for food and jobs — and that as much as 90 percent of reefs could die by 2050 — Paul G. Allen Philanthropies invested in a project to map and monitor all of the world’s shallow-water reefs. All of the visual data is open-source and available for non-commercial use. (Although—to be fair—his yacht's crew sometimes inadvertently damaged the coral reefs he loved so much.)

Environmental issues spoke to Allen’s sense of humanity and morality, but the ways in which he processed and attacked environmental problems mirrored his actions in the tech world.

“Every single project and program that we ran, he was involved in designing it — he approved it and then followed up to see how it was doing,” Deutsch says. “He wanted to make sure that everything was built on good data with clear, empirical answers — not wishful thinking.”

Once again, this was most pronounced in Vulcan’s work with African elephants. The Great Elephant Census, which ran from 2014 through 2016, ended illegal ivory importers’ claims that elephants were plentiful in certain African countries, and that environmentalists were overstating the poaching problem. Facing a dearth of facts, the Vulcan team had to complete the first aerial survey of the elephant population in more than four decades and collate the evidence into a database. The team concluded that the African savanna elephant population in 18 countries had decreased an astounding 30 percent between 2007 and 2014.

The result led Allen to funnel upward of $25 million into elephant anti-poaching efforts over his lifetime.

“These are things that are very difficult to get funded, but Paul and his staff saw the value in this kind of work,” says University of Washington’s Wasser. With Allen’s help, Wasser oversaw one of the broadest-ever DNA analyses of seized African elephant ivory — about 32 tons worth. The effect was immediate: By connecting ivory DNA from different seizures back to individual traffickers, Wasser’s team continues to help Homeland Security charge trafficking cartels with increased criminal penalties.

“The funding of the film was one thing, but probably the most important thing was helping to set up a global satellite surveillance system [called Skylight] that monitors fishing vessels — which has been incredibly useful to us in our pursuit of poachers on the high seas,” Watson says.

Allen was famous for owning a massive yacht where he held parties with rock stars in glitzy locales like Cannes. But his appreciation for marine science was apparent to anyone who knew what to look for.

“He'd have his yacht there every year — which was more like a 300-foot fully equipped oceanographic research vessel, really,” Watson says.. “He’ll be sorely missed. It's amazing. He’s so young to die at 65 but when you think about all the things that he achieved it’s absolutely miraculous that he did so,” Watson says.

Supporters are worried for wildlife in a world without Allen. But he created infrastructure and data repositories that will give the public enduring means to further future research using his technological approach.

The Great Elephant Census' value could’ve ended there, but in 2017, Allen launched a big-data initiative to enable future tracking of endangered wildlife. The Domain Awareness System, a connection of smart sensors and drones throughout Africa, makes real-time data collection of threatened species over a 90,000-square-mile area possible.

In his last month, Vulcan announced an initiative to equip its global wildlife tracking programs with machine learning capabilities created within its own Vulcan Machine Learning Center for Impact.

“I hope that his example of leadership [and] effectiveness in conservation will provide motivation for people to get involved, to believe that biodiversity conservation can work if we focus on it — regardless of whether we have Paul's resources or the labor of our own hands,” Deutsch says. “When you look across his philanthropy, understandably the most involvement is in the most immediate crises we have, like sheltering homeless people in Seattle, but if some of us — both in action and giving money — aren’t also involved in environmental conservation, then there’s no way that our species or children are going to survive or thrive.”

Deutsch notes that the origins of Allen’s environmental conscience began in the Pacific Northwest, where he undertook conservation work with his sister Jody Allen. Here are just a few of the ways in which Allen made an impact at home.

The Ivory Ban: Allen’s elephant work in Africa followed him home. In 2015, Washington State voters overwhelmingly passed the Washington Animal Trafficking Initiative 1401, a bill Allen helped rally 300,000 signatures behind in order to get it on the ballot.

Bringing Salmon Back to the Sound: Allen led Vulcan’s efforts to figure out why salmon are dying, help rewild them, and to connect the public with those efforts. Vulcan Real Estate buildings are the first ‘Salmon-Safe’ buildings in the country. Vulcan spent $27 million to minimize stormwater runoff—something NOAA says is a leading cause of salmon death.