In Federal Way, a key witness to a police shooting was deported by ICE

Two years after Ricardo Hernandez was killed, attorneys are suing in federal court. 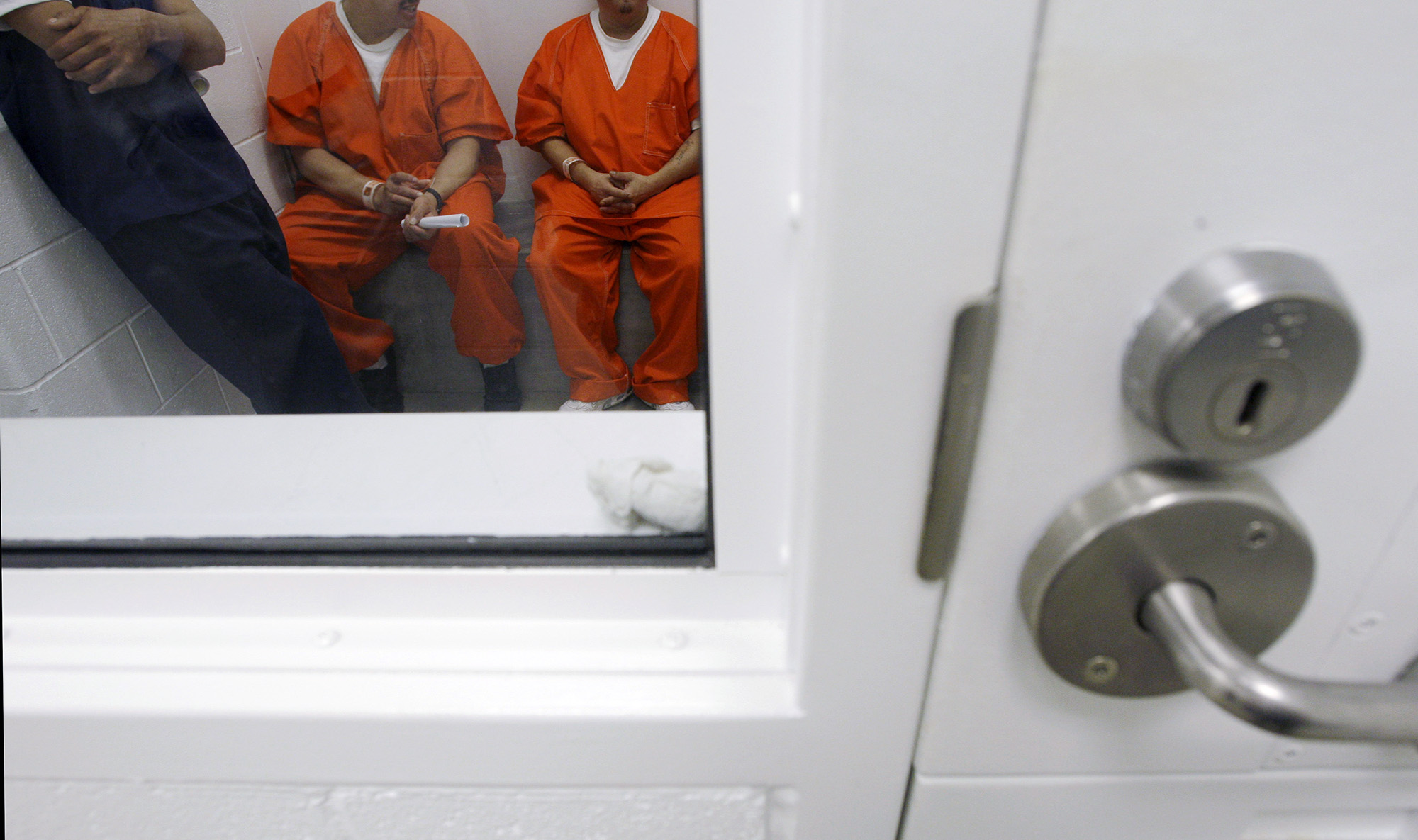 In this photo taken on Friday, Oct. 17, 2008, detainees are shown inside a holding cell at the Northwest Detention Center in Tacoma, Wash. Miguel Hernandez-Velasquez, a witness to an officer-involved shooting, was held at the facility before being deported. (AP Photo/Ted S. Warren)

In a lawsuit against the City of Federal Way, attorneys for the family of a young man killed by police say they have a key witness. The only problem: He's been deported.

Before they shot and killed Ricardo Hernandez on October 8, 2016, Federal Way police officers formed a perimeter around the home of the 23-year-old. He'd barricaded himself inside, wielding multiple knives, causing his family to call 911.

As this was happening, the young man’s uncle, Miguel Hernandez-Velasquez, pleaded with officers to allow him to speak to his nephew, according to a lawsuit filed in federal court earlier this month and first reported by KUOW. Hernandez-Velasquez, who is not identified by name in the suit, reportedly believed he could have helped talk his nephew Ricardo down from what his family believed to be a mental health crisis.

That’s not what happened. After officers ushered his family out of a bedroom window, Hernandez walked onto the home’s back porch, shouted “Just fucking kill me” and was shot and killed by officers Blake Losvar and Tanner Pau.

The officers say he lunged at them with knives, causing them to fear for their lives. In the lawsuit, an attorney for the family says Hernandez was not a danger to others when he was shot.

In the fact-finding inquest that occurred following Hernandez’s death, attorneys for his family, James Bible and Leah Altaras, sought to have his uncle, Hernandez-Velasquez, testify. They called him a “key” witness. “He was there,” Altaras told Crosscut last month. “He was the one who was closest to the shootings when it occurred.”

But in the days after officers killed his nephew, Hernandez-Velasquez was arrested by Immigration and Customs Enforcement. A spokesperson for ICE told Crosscut Hernandez-Velasquez had “felony and misdemeanor criminal convictions and [had] been previously removed from the U.S. on multiple occasions.”

Upon learning he was in custody, the judge overseeing the inquest filed a motion to transfer Hernandez-Velasquez from the Northwest Detention Center in Tacoma to King County to testify. But it never happened.

In emails filed in King County District Court, Deputy Prosecuting Attorney Emily Cox wrote, "It is not worth the expense of transporting Mr. Hernandez (if indeed ICE will even allow it) for testimony that is not essential."

Altaras disputed this characterization, responding in an email to Cox, "We do believe that Miguel Hernandez is a material witness," asking that his testimony be taken any way possible.

In the end, he never testified. Dan Katzer, a spokesperson for the King County Prosecuting Attorney’s Office, which, until recently, functioned as a neutral party during inquests, said he was not sure why not. “We didn’t get the witness for whatever reason,” he said.

Hernandez family attorney James Bible said in an email Tuesday, “He was never able to testify. He was put in ICE detention and there was no way for him to be present at the inquest. His voice was never heard by the jurors.”

Now that the family has filed a civil lawsuit in federal court, getting Miguel Hernandez-Velasquez to testify is even more complicated.

On June 5, 2018, a year after the inquest, Hernandez-Velasquez was deported to Mexico, ICE confirmed. For the family’s attorneys, that presents a major challenge in the pending lawsuit against the Federal Way police officers. “We are in the process of evaluating how to approach using him as a witness in the civil case that has been filed against Federal Way and the defendant officers,” said Bible.

Unlike some officer-involved shootings, Ricardo Hernandez’s death went largely unnoticed. It was noted at the time in the Tacoma News Tribune and the Federal Way Mirror and cited as one of three recent shootings by Federal Way police officers in a 2017 KOMO story. But it spurred none of the outrage of other deaths, such as Charleena Lyles in Seattle and Tommy Le in Burien.

At the fact-finding inquest into the death — standard in King County when a person is killed by law enforcement — six jurors were asked to weigh in on a series of yes or no questions. The purpose was not to determine guilt or innocence, but to lay out the basic facts.

The jurors were unanimous in every answer, determining that family members had warned dispatchers of Hernandez’s mental health issues, that they felt threatened by him, that he held knives and refused to drop them, that he shouted “Kill me, kill me!” and “Just fucking kill me, I can’t kill myself I’m too much of a pussy!” and that he was killed on the porch. They also determined that both officers had reason to believe Hernandez was a threat to their safety.

However, the jury also concluded that Hernandez was more than 15 feet away from the officers when he was killed. They were not asked to answer whether or not he lunged or whether the officers followed protocol.

(Since then, King County Executive Dow Constantine ordered an overhaul of how the county conducts inquests. They were previously viewed as favorable to law enforcement.)

In their federal lawsuit filed Oct. 7, 2018, attorneys for the family say Hernandez was, in fact, putting the knives down and that most of his body was still inside the home when he was shot.

The lawsuit also faults the police officers for not contacting any mental health professionals, despite being forewarned of Hernandez's crisis.

The family is arguing that Hernandez’s rights under the Fourth Amendment of the U.S. Constitution, related to searches and seizures, were violated. They also claim Hernandez’s mother, Margarita, had her Fourteenth Amendment rights violated when the officers killed Hernandez without due process. Additionally, the family accuses the officers of assault, negligence and extreme conduct.

In an interview with KUOW, Hernandez’s cousin Laura Torres said she believes the outcome may have been different if they lived in Issaquah or somewhere whiter. “[Now] I’m scared of cops,” Torres said. “My mom is scared. She is terrified. It’s not fair that they get to continue with their lives like nothing happened when they decided to shoot someone who needed help.”

Cases have been upended before when it's found the government improperly deported witnesses. In 2010, a murder case was initially tossed when a judge concluded the government had deported a key witness. The Supreme Court later overturned the lower court ruling.

But the federal government is not a party to the Hernandez suit and his deportation is not related to the case against Federal Way.

A spokesperson for the Federal Way Police Department did not immediately respond to a request for comment.