Fighting for the right to run — without being assaulted 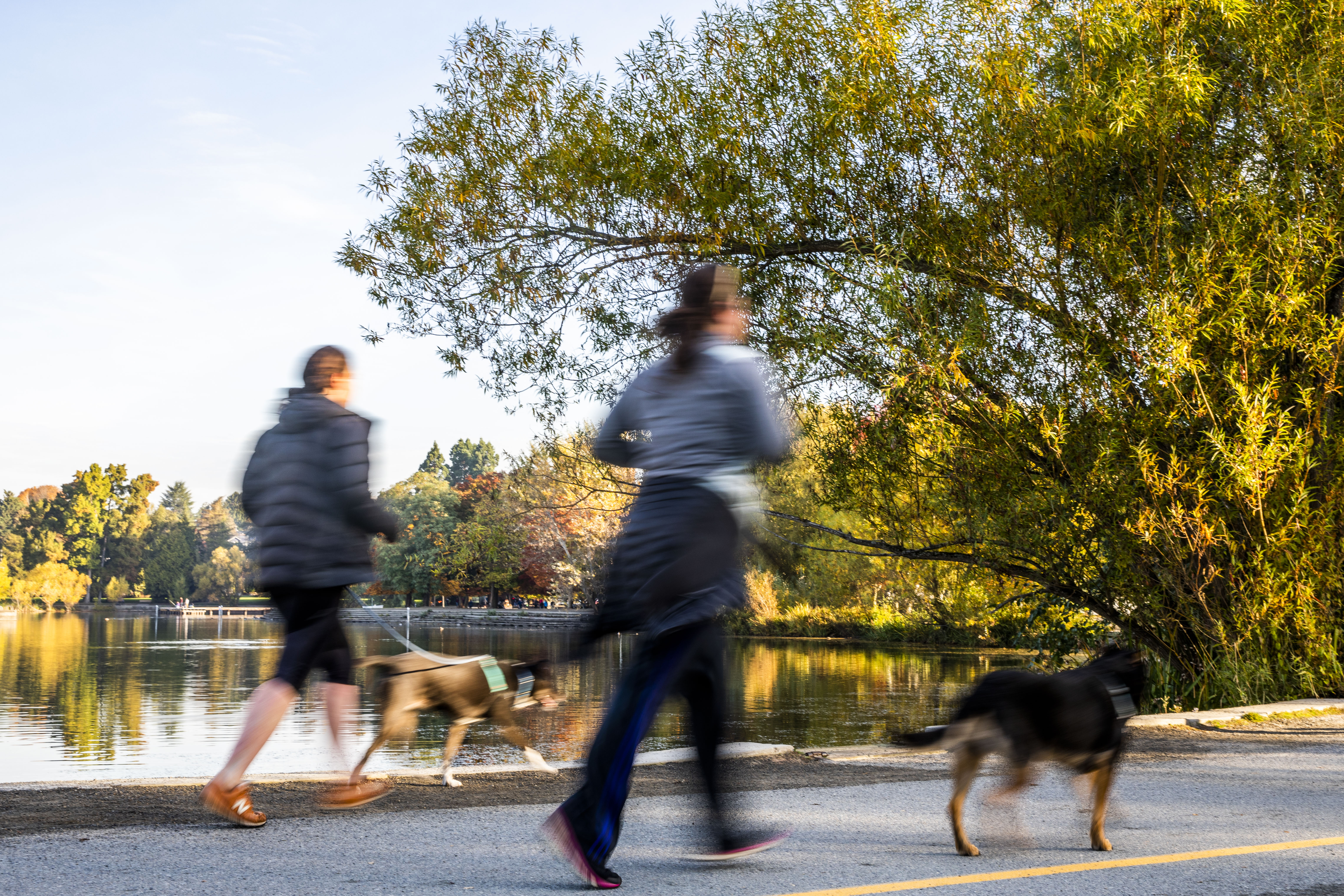 Runners run along the path at Green Lake on Thursday, Oct. 18, 2018. (Photo by Dorothy Edwards/Crosscut)

On September 28, shortly before dawn, Maria Ball was running along Ravenna Boulevard near Green Lake when a man leapt out of the shadows and attacked her from behind. He grabbed her chest and crotch. She screamed and fought back, alerting neighbors, who called the police. Immediately afterward, Ball posted a warning on the Facebook page for the Seattle Green Lake Running Group (SGLRG), urging its 5,000 members to be vigilant. A few days later, another local woman runner called police. She, too, had recently been groped while exercising in the area.

When Gloria Dykstra, a therapist and SGLRG member, saw the post and the splash of TV news around it, she was rattled. It had already been a tough and triggering week, filled with near-constant news and angry debate surrounding the allegations of sexual assault against now-Justice Brett Kavanaugh. She says it was impacting the psyche of her clients, many of whom are rape and abuse survivors. And she felt it, too.

On Friday, October 5, Dykstra saw seven clients through her Ravenna-area practice. Nearly all of them wanted to talk about the explosive national moment. Some wept. And one brought up a recent string of assaults in the neighborhood that Dykstra was unaware of: Over four weeks in late July and August, a single man attacked — with both fists and a pellet gun — five women who’d been walking near Ravenna Park, managing to drag two of them to a spot in the woods where he had staged a mattress. In the end, each woman was able to escape. The man, Sean Reilly, was eventually arrested and charged with multiple counts of kidnapping and assault. He remains in custody.

In light of both the national battles and local assaults, Dykstra found herself struggling to keep it together that day. The issues at play were personal to her. She was raped when she was 16, and began her career counseling child victims of sexual abuse until the stress of the work caused cracks in her molars. “I left my office and just sobbed in the car all the way home,” she says.

Running, for Dykstra, is usually an antidote to this kind of despair: the physical purging, the fresh air, the endorphins. Ravenna Park and Green Lake, which together have roughly seven miles of trail and a lush bouquet of trees, present an ideal route for release. “I absolutely physically exhaust and drain myself and that’s one of the ways for it to not take hold in me,” she says.

Dykstra has been training for ultra-marathons regularly for the past seven years or so, ever since she and her family moved to Ireland for four years so her husband could complete a PhD. To make new friends and stave off the Seattle-like gloom, she started a running club there, and as its organizer, she never, ever let anyone run alone. In part because of her own trauma, “I’m just more afraid in the world,” she says. She describes herself as hyper-vigilant, always preparing for the worst thing to happen, and always wanting, particularly if it’s dark, to have running partners. “It’s very painful when that gets proved right. I don’t want to be proved right! I don't want to be the bonkers friend who’s always jittery and afraid.”

The recent attacks gave new power to those fears. The idea that “I can’t go do this thing that I love, that fills me up, and is my decompression and my mental health outlet” is “really decentering,” she says. “It feels like, can we have nothing? Can we have nothing be safe or sacred? … That is, I think, the violence of it.” Ball mentioned this, too, in her post on the SGLRG page. “I am so heartbroken that someone tried to take something away from me that I love so much,” she wrote.

The next day, Dykstra couldn’t bring herself to run with her regular group in the early morning; their planned route went down Ravenna Boulevard, around Ravenna Park, and back up Ravenna. It took her three-and-a-half hours to get up the courage to run in the neighborhood by herself, and then, a few miles in, she scared herself with her own hand as it swung back and forth. “I completely jumped,” she says, laughing now. “I was like, ‘OK, you have to head home, you are completely absurd right now.’”

Assaults on solo runners are not a new phenomenon. Probably the most well-documented Seattle attack in recent times was against a female runner in a Golden Gardens public restroom in March 2017, before #MeToo took off. The woman, Kelly Herron, successfully fought off her assailant, shouting, “Not today, motherfucker!” in a triumphant battle cry that garnered a lot of commentary on Instagram and across national media. Herron recently received another round of media coverage after claiming that she fought off yet another assault while running a half-marathon in Vancouver this past Sunday. Not all attacks receive so much attention.

The lack of information about other assaults bothered Dykstra. She points out that she only learned of this summer’s Ravenna attacker because of a client, and that if Ball hadn’t taken it upon herself to talk to news outlets and post on Facebook, it’s unclear if many people would have known about that, either. It was frustrating, this vague and renewed sense of alarm, paired with the insidious cultural pressure on victims to accept personal responsibility for an attack. There’s often an onus on survivors to “bat down any possible critiques,” she says. Reports on both the Ball and Herron attacks often mentioned the women had taken self-defense classes, for example; Ball also made clear that she was not wearing headphones.

So, bolstered by her own anger and the cresting wave of #MeToo — which has spurred many people to challenge the surfeit of sexual violence and its apologists — Dykstra decided to do something.

On October 8, she posted a missive on the SGLRG Facebook page, asking for some assistance. “We are, collectively, so tired of the amount of precautions and calculations required in order to *not be raped* during a 6-mile run,” she wrote of the female-identifying running community. “I read the news, but I don’t want to have to check the Police blotter or the Seattle Times every time I want to run alone.” Her proposal was modest: She suggested members of the group sign a letter asking the police to create a hyper-local alert system for attackers at large.

“I just don’t think it’s a big ask to say, can there be some sort of notice, whether it’s electronic or a physical, paper notice,” she says now, suggesting, “‘Maybe avoid the park this week because there’s someone at large and there’s been six attacks.’ I just think that would go such a long way.” Seattle police do post public safety alerts on their social media channels, but not in every case, and not for either the recent Ravenna Park attacks or the Green Lake ones.

Within a few days, Dykstra's post had received nearly 100 comments, including some from men, offering support and ideas. Among them: ask Seattle City Light if there could be a conversation about adding street lamps to the half of Green Lake that lacks them; take a letter to the North Precinct to see what it might be up for in terms of alerting the neighborhood; have a conversation with a police officer who specializes in sexual assault; ask an officer to join the SGLRG and post directly with updates; ask the Seattle Police Department to add a patrol car when someone is at large in an area (which is something that does happen regularly, according to the SPD); and schedule a coffee meetup with survivors and allies just to have some healing conversations.

Reached via email, Maria Ball mentioned, too, that she thought attending a North Precinct Advisory Council meeting would be a great start; she attended one in early October and “it had all the right cops in the room.”

Dykstra did notice, though, what she calls a “deafening silence” from some men in the SGLRG — some she knows personally, who she says are usually very active in the group. And there was at least one male commenter who had reservations, suggesting that he liked the idea, but “each of us are responsible for our safety” and should “take the necessary steps to ensure that you and others do not become victims.” Several women joined Dykstra in challenging that commenter. “To say, ‘A collective act could be helpful,’ and for someone to say, ‘No, you’re responsible for yourself’? That’s the epitome, that’s the philosophy that’s running this country right now,” Dykstra says.

On October 15, one SGLRG member announced that she had received a call back from the North Seattle Community Police Team — a group of officers who work on neighborhood concerns and who regularly attend Advisory Council meetings. The officer told her the department was open to working with the group to improve its alert systems, and Dykstra, Ball, and another runner met up with some officers to talk about it a few days later.

In addition to the SPD’s presence on NextDoor, a neighborhood-level social network, one specific resource that does exist is the SPD’s “Tweets by Beat” program, which divides of-the-minute activity reports into neighborhood quadrants and feeds them into individual Twitter handles. For Green Lake, that handle is @SeattlePDJ3. There was nothing reported on the feed at the time of Ball’s attack, though. That is not unusual: An SPD spokesperson told Crosscut that while the department does its best to disseminate pertinent information out quickly, putting alerts about sexual assaults on social media channels can present a high risk for revictimization.

A couple days after Dykstra’s initial post, another man posted to the SGLRG page, observing that “the morning was pitch black at the lake, but something was different ... lots of people were grouped up supporting each other and providing running and walking company.” And he linked to a snapshot of social science research buzzing around social media that juxtaposes what women are encouraged to do on a daily basis to prevent assault (“hold my keys as a potential weapon,” “don’t wear headphones when jogging,” and so on) with how men behave (“I don’t think about it”).

Dykstra can’t be sure if the support the commenter spoke of — or his decision to include the link — is at all a result of her post. She still accepts that it’s possible nothing much will come of this whole thing. Yet she also knows it was “cathartic for me to post it … for me to say that out loud. And it’s something for us to do, some little step to take. Even if it’s futile, it’s a little step to take. And that act is healing.”

This story has been updated with reports of a second attack on Kelly Herron.