In first debate for US Senate, Hutchison jabs, Cantwell parries 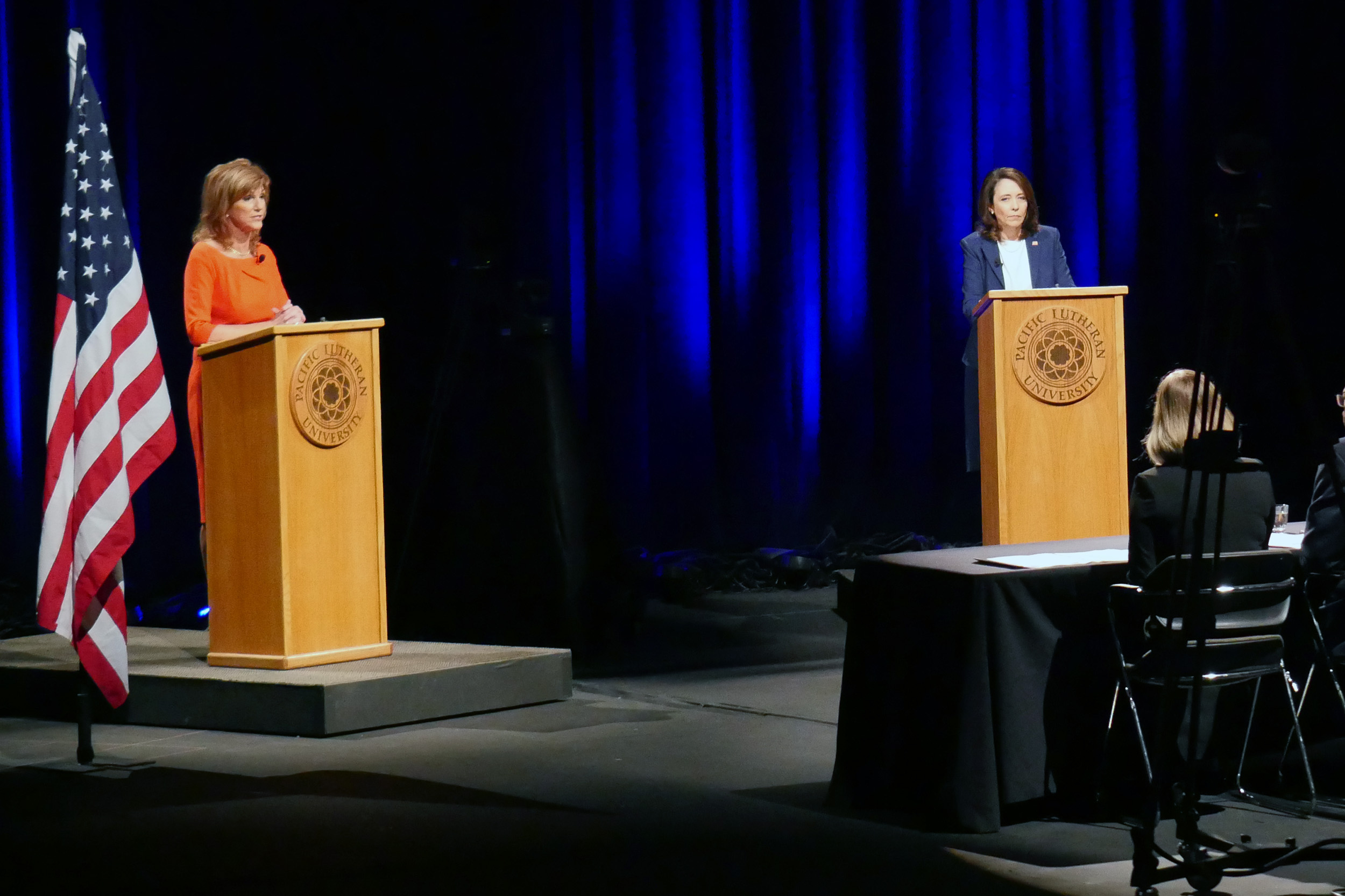 There was little doubt what the first subject of the debate for Washington’s U.S. Senate seat would be. Coming just two days after the confirmation of Brett Kavanaugh to the U.S. Supreme Court – and in the wake of the bruising fight that preceded it – the Monday debate between Democratic U.S. Senator Maria Cantwell and her Republican challenger, Susan Hutchison, started with a question about sexual assault. 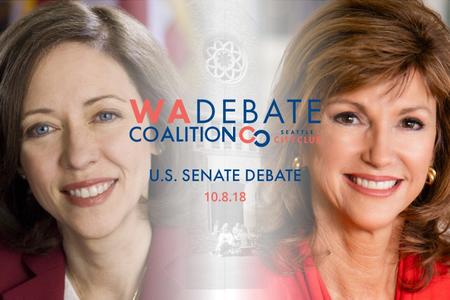 Maria Cantwell (D) and Susan Hutchison (R) debate in the first of two debates for the U.S. Senate.

Standing at podiums beneath the proscenium of the Karen Hille Phillips Center for Performing Arts on the campus of Pacific Lutheran University in Tacoma, the candidates were asked how it is possible to take claims of sexual misconduct seriously while ensuring the protection of those who may be falsely accused. It was a question that touched on the primary concerns of both parties coming out of the confirmation process, laid bare after 51-year-old psychology professor Christine Blasey Ford accused Kavanaugh of assault — an accusation that Kavanaugh denies.  And in what would become a recurrent approach throughout a very civil hour-long debate, both candidates tacked somewhat toward the center, rather than going to their corners in partisan fashion.

Counter to the persistent drumbeat of her party, Hutchison steered clear of concerns over false accusations. Instead, she committed her minute-long answer to claims that she has been a lifelong advocate for women, pointing to instances in her professional life where she says she fought for equal wages and fought discrimination.

Cantwell followed by doing what one would expect Hutchison to do: calling attention to false claims. After noting the national rates of sexual assault, Cantwell stated that between 2 and 8 percent of rape claims are falsified while stating that “we need to have a process for listening to them.” The point here, though, was that Cantwell found the process that was used to assess Blasey Ford’s claims wanting.

Hutchison said she had her own issues with how the allegations were handled, calling the hearings a “national disgrace” and — in the first of a few partisan broadsides from the former television broadcaster — placing that disgrace, “square at the feet of the Democrats.”

Cantwell appeared to be less interested in partisan rancor, painting herself at numerous points as a bridge-builder with a list of bipartisan accomplishments. More remarkable, though, was Cantwell’s unwillingness to take on President Trump, directly. While she was eager to oppose the president’s policies on trade and immigration —  both of which Hutchison supported — the three-term senator repeatedly steered clear of direct criticism of the president, at times when the moderators and even Hutchison were teeing her up to do so.

There are numerous possible reasons for Cantwell’s soft touch when it comes to Trump. First among them is the fact that her seat — which she won by 21 points in 2012 — is considered secure by pollsters and pundits, and engaging with Trump in open political warfare would only bring the race unwanted attention. That has been the case for months. What is new, and perhaps also impacting Cantwell’s approach, is the fact that polls have recorded a recent swell in Republican enthusiasm following a series of wins by the president, including the Kavanaugh confirmation. Whatever the reason, tiptoeing around Trump made for some strange theater.

For instance, on the question of cyber security, Cantwell boasted of her efforts to improve safeguards for consumer information before pivoting to national security, as one would expect any Democrat to do. But instead of pointing to the ongoing investigation of Russian interference in the 2016 election, which has implicated a number of Trump associates, she mentioned Russia’s meddling in the Ukranian election — viewed by many as a warm-up act for the American campaign. Stranger still was the fact that Hutchison was the one who brought up Russian hacking of the U.S. election, if only to lampoon Hilary Clinton for lax security surrounding her personal email server.

Later, when asked about incivility, Hutchison replied that “The conversations that hurt people start on social media,” urging the young people watching to “think first before they post.” Given the president’s late-night Twitter fusillades, which have a history of being hurtful to Trump’s enemies, the Democratic response was practically prewritten. Cantwell didn’t bite. Instead she boasted her own bipartisan bona fides, recalling work she said she had done with Republican senators — Orrin Hatch of Utah on homelessness and Idaho’s James Risch on wildfire prevention — stating that the key to bipartisan cooperation is that “you have to be willing to come to the table and base it on science.”

Late in the debate, the moderators unearthed that thorniest of questions for Democrats: What has Trump done right? Cantwell had no problem answering, though, citing the opening of the Canadian dairy market under the president’s renegotiated North American trade deal.

So, yes, it was civil. But there were still clear differences between the two camps.

On immigration, the Affordable Care Act and Social Security, the candidates stood and delivered the party line. For Hutchison that amounted to building the wall, repealing and replacing Obamacare, and fixing-not-nixing Social Security. Cantwell countered that the wall made didn’t make fiscal sense, the ACA had provided insurance for 650,000 Washingtonians, and that Republicans were dead set on ending Social Security.

The debate ended on a question selected by the viewers both in the hall and watching from afar. Given the choice of having the candidates answer questions on gun policy, the opioid epidemic, or environmental policy, the audience chose guns. And the candidates again fell down party lines as they discussed restrictions on assault weapons and safe storage laws. Bringing the debate full circle, Hutchison returned to the threats of sexual assault. “Women who have been the victims of sexual assault should have the right to have a loaded gun next to their beds,” she said. Cantwell replied that gun laws do not hurt women, nor children. In this case, the science appears to be on the incumbent’s side, but Hutchison’s appeal had the kind of emotional resonance that might just trump science.

Crosscut's Manola Secaira assisted in the reporting of this article.

Maria Cantwell (D) and Susan Hutchison (R) debate in the first of two debates for the U.S. Senate.