How capping I-5 could redeem Seattle’s past 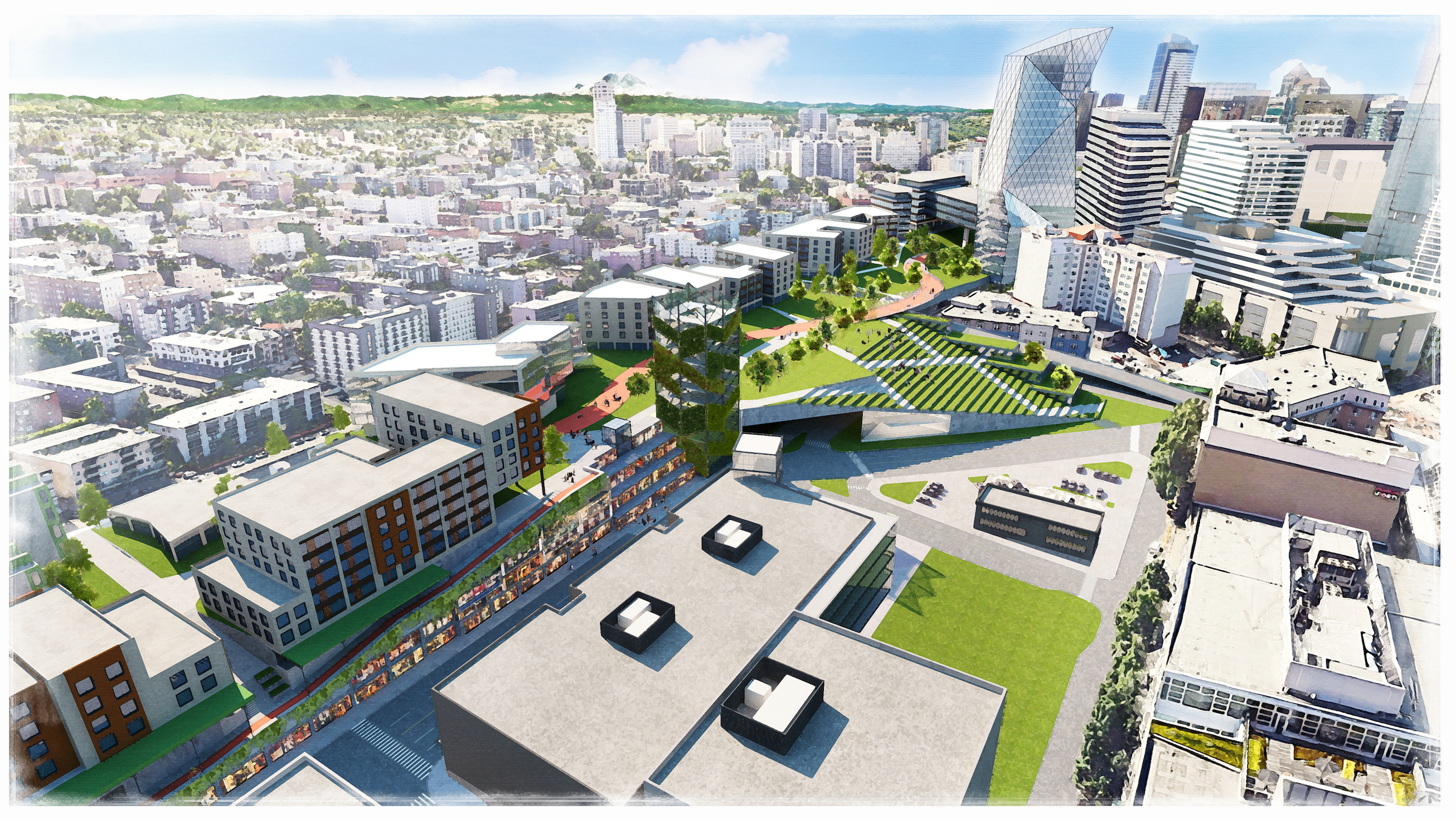 One of the ideas for what could be done with expanded lidding of I-5 through downtown Seattle. (Draft imagery by Studio 216 for Lid I-5. Development of the images will continue this week.)

If Chicago is the City of Big Shoulders, Seattle is the City of Big Visions. We’ve literally moved mountains to create the city we know — we’ve redirected rivers (the Duwamish), connected the sea to lakes (Puget Sound to Lake Union and Lake Washington), washed away hills with massive regrades to create the flats where high-rises flourish a century later, and we filled in tide lands to build an industrial district, an artificial island and the flourishing SoDo.

If nature didn’t provide, we did.

But some of those visions have taken a toll — our big visions today often involve not only imagining and building a better city, but undertaking the process of repair. A case in point: I-5, and the increasing discussion of putting a lid over more of it in downtown Seattle.

Our obsession with freeways in the 1950s and ’60s left us with a problematic legacy, one we’re still coping with today. That era cleaved the city in half with the I-5 trench through downtown. It also left us without mass transit (voted down in 1968 and ’70) and with the Alaskan Way Viaduct cluttering and cutting off the waterfront. As a result, the city’s core was cut off not only from Elliott Bay on the west, but also severed from Beacon, Capitol Hill and First Hill on the east.

It could have been much worse. A new documentary, Ramps to Nowhere, by filmmaker and UW Bothell professor Minda Martin, tells the story of the anti-freeway movement here in the 1960s and ‘70s that stopped a proliferation of proposed Seattle freeways that would have made Seattle a tangled spaghetti of at least 15 highways and massive interchanges. Most famously, the activist groups prevented the R.H. Thomson Expressway from being built, which would have run miles from the north end of the city to the south through many neighborhoods and the Washington Park Arboretum. The ramps to nowhere are the remnants of the unbuilt expressway — ruins of the dominance of urban freeway solutions. The ramps are currently being removed, but have stood as a reminder of planning folly.

The film is making the circuit of film festivals, but a segment can be viewed here. Martin finds great archival footage, interviews activists — from University of Washington professors in Montlake to Black Panthers in the Central District — and does a great job of telling the story of what was nothing less than a public insurrection against planners. Their grand vision would have been catastrophic in terms of the community fabric, social equity, the environment and common sense. The rebellion included opposition to the expansion and extension of I-90 through Seattle’s Black community. That project wasn’t stopped, but hard-fought mitigations (like a lid, parks, and bike paths) were won.

A major inspiration for the anti-freeway folk of 50 years ago was the massive I-5 project through Seattle. During construction in the early to mid 1960s, it had destroyed some 6,000 homes, slashed through the International District as it cut a concrete canyon through the heart of the city. Major connections, like Pike-Pine, were severed, but so too adjacent neighborhoods.

This is important context for the visionaries of the Lid I-5 movement. The idea of lidding I-5 through Seattle, especially through the downtown core, has been gaining momentum. A city grant has helped come up with concepts for how the new “land” of a lid — a concrete cover to I-5 strong enough to hold buildings, parks, roads and people — could be used. City Councilmember Sally Bagshaw has characterized it as a “land make” instead of a “land take.” 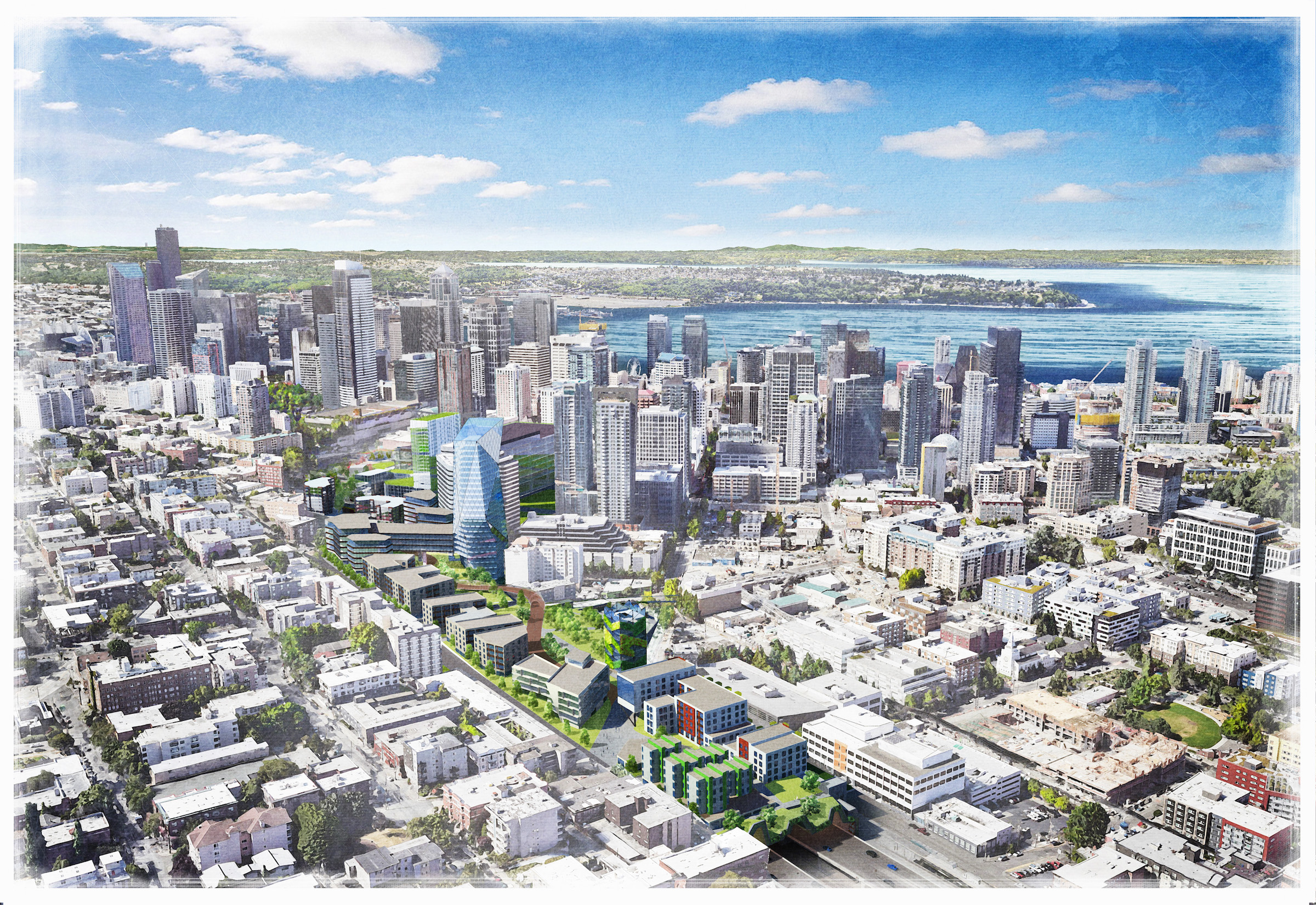 Lidding I-5 could create more green space, housing and other benefits for Seattle. (Draft imagery by Studio 216 for Lid I-5)

Lidding I-5 could create more green space, housing and other benefits for Seattle. (Draft imagery by Studio 216 for Lid I-5)

As part of the package to expand the Washington State Convention Center, $1.5 million has been allocated to the city for an upcoming study of the feasibility of lidding which will be undertaken in 2019. The Lid I-5 group and its partners last Wednesday unveiled a variety of visions for what lids might look like in the downtown core. The unveiling of concepts, part of the grant process, took place at the Melrose Market studios right near I-5 on Capitol Hill, ground zero for the argument for lidding’s potential.

The Lid I-5 movement supports no particular plan — this is epic brainstorming and community engagement. But the concepts offer creative ideas of what the potential is. It could add hundreds of acres of urban “land” to the core — and with downtown land prices being what they are, the cost of building freeway lids could well pencil out and rid much of the city of what Lid organizer Scott Boujukian calls an “earsore and an eyesore.”

The concepts expand on the piecemeal lids that already exist, like Freeway Park and the Convention Center, which cover parts of I-5 and were afterthoughts, previous attempts to repair a scar for cars. But if you could take the roughly 40-acre swath of open freeway and public land running, say, from Marion to Thomas streets, what could you do with that?

Five design teams took a whack at it and what emerged were concepts for parks, promenades, P-patches, bioswales, dense developments for affordable housing, mixed-use towers, room for a downtown public school, hotels, better bike and pedestrian connections, more open space, better storm water infrastructure and even, in one concept, a vertical farm.

Commercial development could help pay for the project. Imagine, 40 acres to play with in the downtown core. In architect speak, a developed lid would result in a city fabric “re-stitched.” Even better as one designer said, lidding “would not just fix a problem but make it better than it ever was.”

The designs are complex and almost entirely on the public right-of-way. They integrate with the expanding convention center complex, Freeway Park, Plymouth Pillars Park on Pike and other places and spaces along the freeway fringe. They emphasize mobility — ways of moving people via pathways, grand staircases, catwalks and corridors lined with shops and public art. It’s a chance to look at a kind of idealized modern city that literally bridges highly built downtown to its densest neighborhoods like First Hill with a ribbon of opportunity.

But it would be complex (lidding sloped areas could be tricky), expensive (in the billions) and would need to be integrated with whatever the Washington Department of Transportation is going to do as they plan for the problematic work to replace, renovate or retrofit the current I-5. The Lid I-5 folks think that by getting the ideas out and building support early, they can be part of the consideration as the state moves forward.

Attendees at the concept unveiling included Thatcher Bailey, executive director of the Seattle Parks Foundation. He enthused that they offered visions of “the city we want to live in — the city that can be.” It’s “extraordinarily ambitious,” he said, “but it’s not entirely insane. It’s insane in a good way!”

Whatever it might look like, these lid ideas offer a chance to attack problems like open space, parks, affordable housing and transportation all at once—in a non-siloed way, which is how we often discuss projects.

Councilmember Bagshaw, a Lid I-5 supporter, likened it to the Waterfront do-over, which has been 15 years in the making — a big idea that has worked its way through the often-tedious Seattle process and is finally coming to pass. She expressed hope that in 15 years she would be attending the Lid ribbon cutting.

Sam Assefa, director of the city’s Office of Planning and Community Development, talked about the transformative nature of Millennium Park in Chicago, a lid over a railway right of way. Assefa is the former head of land use in Chicago. The park has become a magnet for families and kids, a vast public room for the city. It is also the city’s No. 1 tourist attraction. Assefa’s office will be supervising the feasibility study.

“We need to think bold and think really big,” he said.

These schemes do that and invite all of us to join in imagining the possibilities. In that sense, the Lid I-5 offers us all a kind of giant white board for a city of visions — hopefully ones that reflect what we have learned from mistakes of the past. 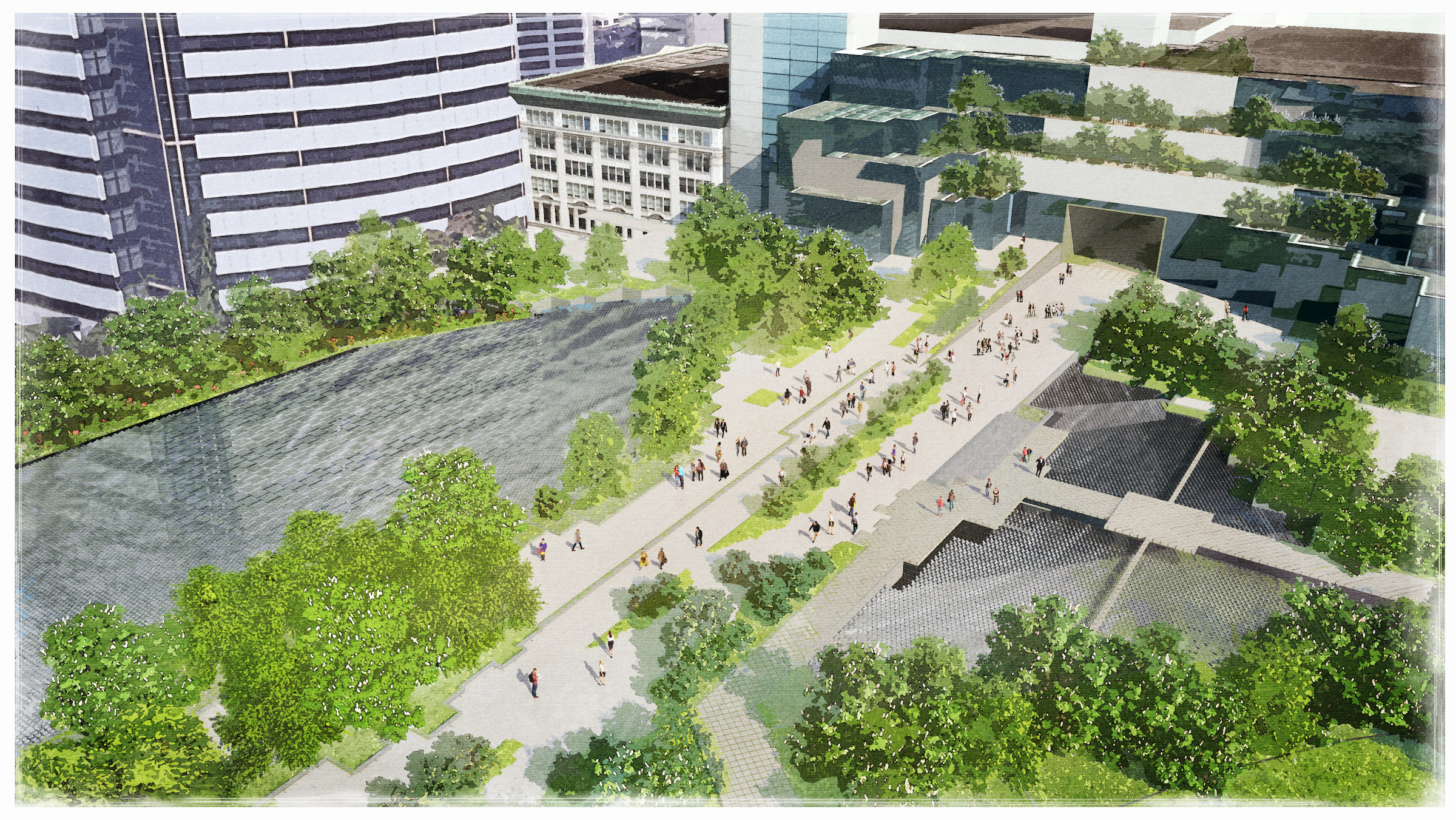