A writer comes to grips with the plight of the Puget Sound orca. 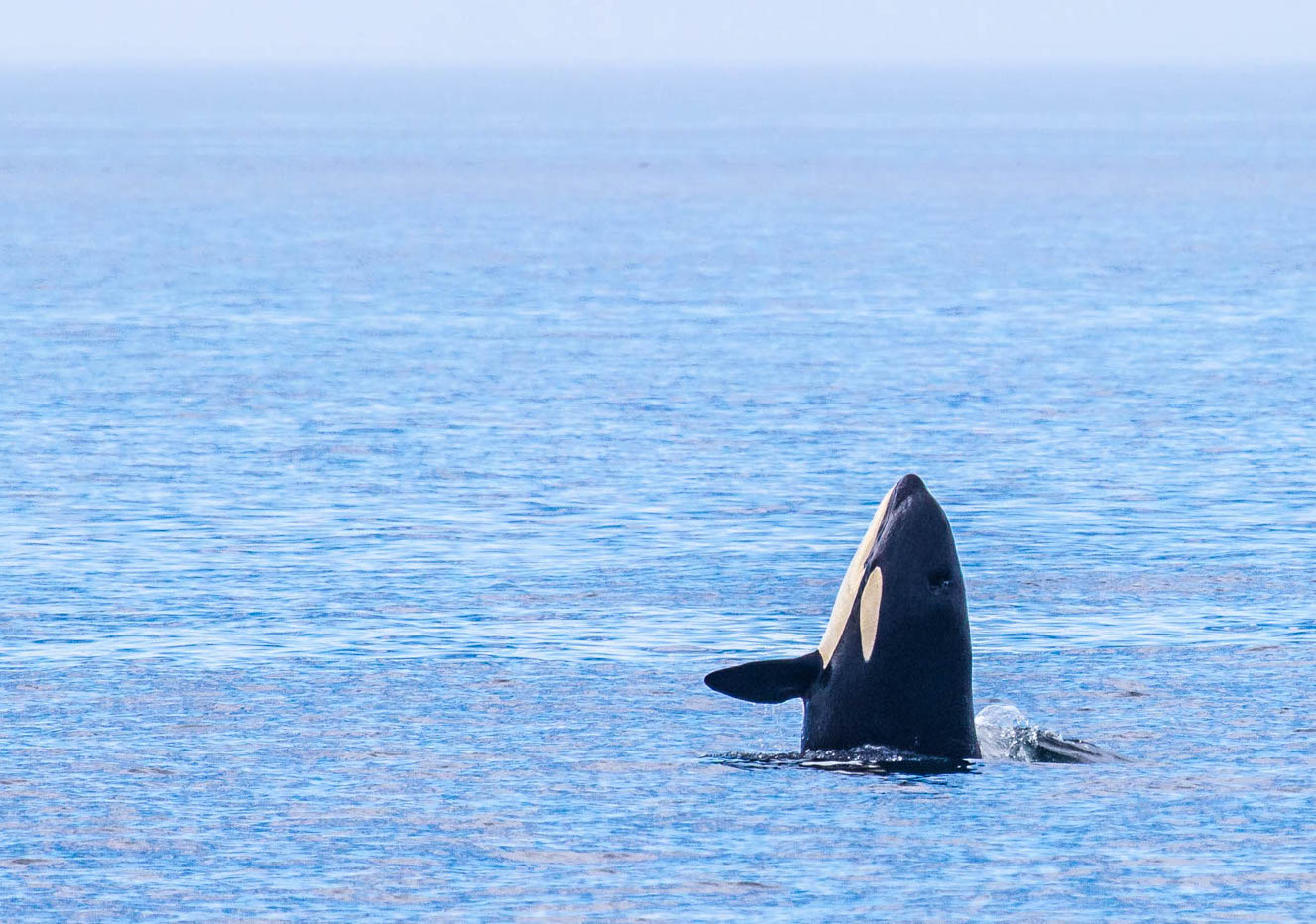 A southern resident killer whale spyhopping near the San Juan Islands. (Photo by Andrew A. Reding)

This article was originally published on High Country News.

The thing I loved most about Stuart Island was how it never seemed to change. Every summer I would come back a year older, but the mountains still loomed above the ocean, the Douglas fir trees still framed the dock, the pond still felt refreshingly cool when I ran up the hill and jumped into it.

I’d become all at once the 5-year-old biting into the apple that her father had just plucked from a tree, the 10-year-old singing at the top of her lungs as she romped through the forest with her best friend, the 20-year-old jumping off a cliff into the cold, cold ocean. The stasis of the island let me escape time altogether — as if I could go on doing exactly as I liked forever, without the burden of anxieties, or responsibilities, or consequences.

But the island also offered just the right amount of mystery. As a child who lived in the midst of Southern California’s sprawl, our annual pilgrimage to Stuart, one of Washington state’s San Juan Islands, felt truly wild. I saw things I would never see back in Long Beach: bald eagles, Steller sea lions, a hippie toke up and strip naked for a swim. The surrounding Salish Sea waters were also home to the southern resident killer whales, the famous fish-eaters of the Pacific Northwest. I kept a constant lookout for them from Stuart’s shores.

My family was close to a woman who kept tabs on the whales, a comrade in my efforts to spot them. Lisa was one of the few people who lived on the island year-round, in a small seaside cabin with succulents and barnacles lining the shelves and a feral garden that never failed to produce garlic, walking onions or hummingbirds. Even after she had retired her small whale-watching boat — supposedly an old Russian spy vessel, bright yellow with a pair of green eyes painted on the bow — she would tune her radio to the channel the whale-watching outfits all used, just to hear them chat about where they thought the orcas would be that day. When a pod seemed to be heading toward Stuart, she called us, and my whole family would go running to the lighthouse at the northwest tip of the island.

Sometimes, we got there in time. We would stand at the point and watch the whales swim around the corner in pursuit of salmon, their dorsal fins cresting out of the water. If we were really lucky, we’d see them stick their tails down and bob their heads above the surface — a behavior known as “spyhopping”— or even do a full breach. Scientists still don’t know exactly why whales jump out of the ocean like this. I like to believe that they simply do it for fun.

Seeing orcas in the wild reminded me of how big the world is, of the infinite ways there are to be on this Earth, of the delightful and mysterious beings that walk or swim or breach among us. But even as an 8-year-old girl, I knew that humans have not always treated orcas with reverence or even basic respect. Lisa told me about the damage done in the 1960s and ’70s, when SeaWorld and other marine parks rounded up about four-dozen southern residents, more than 45 percent of the population. “They’re horrible to the whales,” she said.

This was on my mind when, in elementary school, I visited SeaWorld San Diego with my Girl Scout troop. After getting the usual spiel from Shamu’s trainer, I prodded my best friend, Alex, to ask a question for me.

“Is it true that you give the whales Valium?” she asked, perked up in her seat and smiling. The trainer’s eyes widened and her body stiffened. Our troop leader’s gaze cut right past Alex to shoot me a vicious look. I had no idea what Valium actually was, but from the way Lisa had talked about it, I knew it wasn’t good for orcas.

As an adult, I’ve gained a deeper and darker understanding of what the southern resident orcas left in the wild are up against. They battle constant vessel noise, which interferes with their ability to communicate and hunt. Their blubber is full of the toxins that we continue to let leak into the water. And with so few king salmon left — thanks to overfishing and dams — the whales are literally starving.

New threats also loom: The proposed expansion of the Trans Mountain pipeline, which carries crude and refined oil from Alberta, would mean up to seven times more tankers coming from Vancouver Island through the channel that runs along Stuart Island — the same channel where we watched the whales fish and play from the lighthouse.

For now, the project is stalled. In August, a Canadian federal court revoked the pipeline’s approval, ordering the National Energy Board to further consider the concerns of First Nations and study how the whales would fare with the increased traffic. If an oil spill were to occur, would we lose the southern residents? After all, it’s happened before: After the Exxon Valdez spill in Alaska’s Prince William Sound in 1989, the Chugach transient killer whale population effectively died out. The pod has dwindled to no more than seven whales, and they haven’t successfully reproduced since the disaster.

But the question of how a big spill would affect the Salish Sea orcas may already be moot. The southern residents are listed as endangered in both the U.S. and Canada. Their numbers are down to 74, a 30-year low, and for the last three years, no new members have been born. Or, at least, none that have survived. This summer, the mother of an orca calf that lived for less than an hour carried the baby’s body in mourning for 17 days. And when researcher Ken Balcomb declared an emaciated young whale named Scarlet dead in September, he saw it as a portent of tragedy that extends to her entire population. “Extinction,” he told the newspapers. “They’re not going to make it.”

Not long ago, it would have been hard for me to imagine this happening to the southern residents. Seeing their 10,000-pound bodies burst out of the water and into the air made them seem so vibrant and alive. But I didn’t spot any of the whales from the lighthouse this summer, or the summer before. The more I learn about their plight, the more I see those childhood sightings as precious; I no longer take it as a given that, if I look hard and long enough, I’ll once again glimpse the orcas.

There’s an annual recital on Stuart featuring a pianist who spends much of his year helping hospice patients compose music. In the middle of the concert a few years ago, my then 10-year-old brother looked out the window and noticed that there were whales. We ran outside to a short cliff that overlooked the ocean. The orcas were closer than I had ever seen them, swimming in water so clear that I could see them for a dozen feet when they dove below the surface. We could hear their breaths when they poked their heads out of the water. Instead of passing by like they usually did, the pod hung around — diving, playing, seeming to chat with one another.

As I watched them, I imagined that the whales were drawn in, and even soothed by, the music. It felt like a timeless moment. But I’ve come to understand that such a thing doesn’t actually exist. I might never have another experience like that; the threats the orcas face make that loss even more likely. That day, after the whales swam off, we returned to the concert enveloped in a euphoric haze. Now, I wonder whether the very fact of time’s passage — the inevitability of the truth that both the whales and I would move on, and I didn’t know when or if I would see them again — is what made that moment so special.

Now 30 years old, I live closer to the island, in Seattle, where I can see the same mountains that rise above Stuart on my commute home. On my last visit, I realized I’ve started to notice the island’s changes: The scar tissue Lisa has gained over the last year through her battle with cancer; the rickety feeling of the dock now that its boards have grown loose underfoot; the growth of the trees that surround the pond, how they shade it from the afternoon sun and make my daily dip feel all the chillier. None of us can actually escape time, despite the illusions we create for ourselves. We can’t expect permanence from the things we love, the wild places and people and creatures that keep us full of wonder.