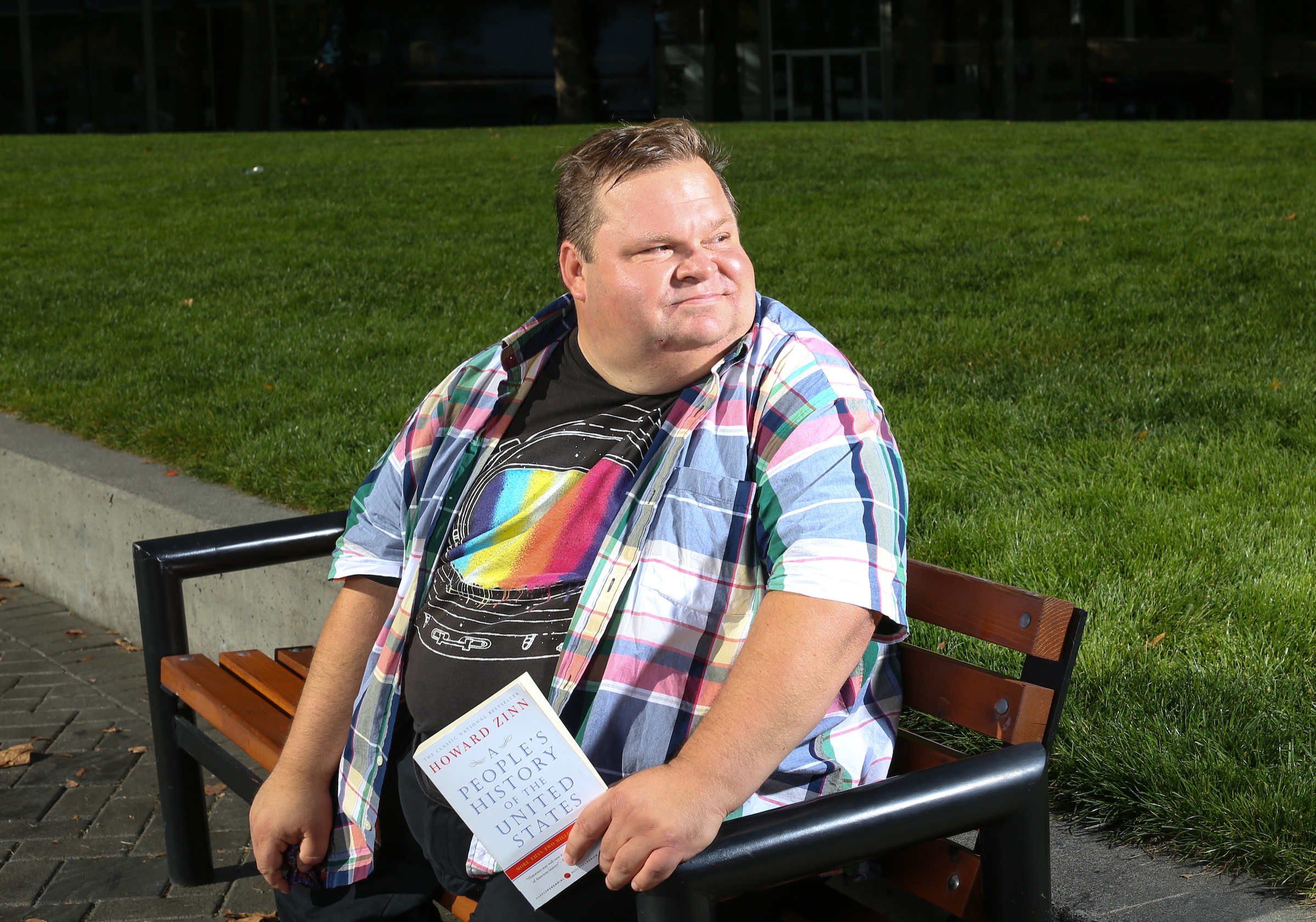 Storyteller, author, and actor Mike Daisey photographed at the Seattle Center on Oct. 15, 2018. Daisey, holding a copy of the Howard Zinn book, is currently performing "A People’s History" at the Seattle Repertory Theater through Nov. 25, 2018. (Photo by Karen Ducey for Crosscut)

Mike Daisey is a big talker.  And he’s at it again in Seattle, with an ambitious new cycle of monologues inspired by Howard Zinn’s book A People’s History of the United States — and by the standardized textbook from Daisey’s high school history class.

A People’s History, which runs at Seattle Repertory Theatre through Nov. 25, is an epic gabfest that is broken into 18 performances of 90 minutes each. You can try to attend each and every one of them (the full cycle is repeated twice during the run). Or, Daisey assures, you can dip into separate eras of the historical panorama — say, the Civil War years, or the “robber barons and rebels” epoch, or the final chapters about recent history that Daisey has added. (Expect new Supreme Court Justice Brett Kavanaugh to make an appearance there.)

From his breakthrough monologue 21 Dog Years: Doing Time @ Amazon.com, a tale of wonder and disillusionment as a grunt in Seattle’s early tech bonanza, Daisey has yakked Off-Broadway and at theaters around the country about a mind-boggling array of topics spanning American politics, culture and follies. Periodically he returns to his old stomping grounds of Seattle to share his thoughts.

Daisey has focused his insightful humor and prodigious research on such topics as homeland security (If You See Something, Say Something); impresario P.T. Barnum,  scientist Nikola Tesla and other influential movers and shakers (Great Men of Genius); fantasyland escapes like Disney World (American Utopians), and most famously and controversially, the founder of Apple and the conditions in Chinese factories that make Apple products (The Agony and Ecstasy of Steve Jobs).

A zany comedian, devoted podcaster and fierce defender of progressive political values, Daisey honed his unique brand of storytelling as an improv theater artist in Seattle in the 1990s. As the millennium turned and his career soared, he moved on to New York City, where he still resides. But his roots in rural, working-class northern Maine and freelance rebel stance continue to inform his worldview and his work.

Here are some edited excerpts from a recent wide-ranging conversation with Daisey about his new show, high school history books and the scandal that got him booted off a popular public radio show.

The last time you appeared here was in 2016, shortly before the presidential election. You performed The Trump Card and shared the minority opinion that Donald Trump would win the election.

We taped that monologue live and posted it on Slate where it’s had nearly 200,000 views. It didn’t really work out for me and my country to be right about Trump. I would gladly have been wrong.

Howard Zinn was a historian and political activist who said he wrote A People’s History of the United States as an alternative to a "fundamental nationalist glorification of country" imparted in most U.S. history textbooks. Various editions of the book have collectively sold two million copies since it came out in 1980, but why are you doing a theater piece based on it now?

I feel like it was seminal because it was the first book that attempted to create a history of this country that looked at the negative spaces, that investigated the areas and marginalized peoples that had been left out and redacted from the traditional history books. He wanted to make a history that was comprehensive enough to be a foundational stone that others can draw upon.

So many people have read Zinn’s book and been rocked and shaken by it. Its power extends far beyond the political because it actually reckons with the central myths of American history.

What have you learned in the process of transforming it into a show?

I’ve worked on the show for three years and I’ve been rewarded by that. It’s just taught me a tremendous amount about connecting the things that happen now to the story we tell about ourselves and call history.

Zinn wrote some very difficult things to wrap our heads around — for instance, about how the “removal” of Indians from their homelands in the 1800s was primarily a land grab directed by President Andrew Jackson and others.

Look, it’s very painful to perform this story, and to talk about these aspects of our history. It’s painful and it implicates the reader, especially if you’re a white male. But, intersectionally it touches every American.

How would you respond to criticism that this historical view is too negative, that it omits the good things that arose from the American experiment?

I think the book, and I hope my show, are incredible love letters to America. You have to love your people and your country very deeply to speak honestly to them in the hope we can find and embrace our better selves. If you truly didn’t care, it would be easier to be silent.

Zinn received praise but also some harsh reviews when A People’s History first came out.

He did, but the things he wrote about are well-documented. Some complained that he picked out the most heart-rending, terrible things Americans did, but they are things that actually happened. And there was a complaint that the book was too dramatic, too theatrical. One thing that endears me to Zinn is that he also wrote plays! And when he was asked once what he wanted to do most, he said it was to be a [successful] playwright.

You work into the show some analysis of your own high school history textbook from the 1980s. Why?

I’ve assembled a number of textbooks from different places over the years because that’s our shared understanding of a default American history. And there are few historical accounts that you can find that are more slanted. Zinn’s book is titled “a history,” and there should always be multiple histories.

You’ve performed this show once before, at the Guthrie Theatre in Minneapolis. What was the reaction?

I think a lot of people saw that the show’s title and saw a photo of this fat guy performer who looked nice and bought tickets without knowing much about it. We usually had no walkouts, but one night we had six or seven, and it happened to be when I was talking about the Black Power movement. They were not prepared to be called out by someone who is just as racist and privileged as they are, because I’m white, too.

I’m white and male, a member of a group that has permission and consequence in this society... I think everyone knows there’s racism in America, but you’re looking for ways for people to see it and even feel it. I have to work and am still working on, erasing and understanding prejudice, and racial and economic inequity, in my own life. I still grapple with that daily. But the idea is to be renewed by that awareness, to renew the fight and give people hope.

Speaking of grappling, in 2012 you were slammed by the press by performing parts of The Agony and Ecstasy of Steve Jobs on the public radio show This American Life that partly fictionalized your eyewitness account of labor conditions in a Foxconn factory in China that makes iPhones. Your defense was that what you were doing was theater, not journalism, and you were taking theatrical license. The scandal didn’t end your career, but has it shifted things for you?

Actually, I feel like it’s been a great opportunity for me to understand deeply the real bones of how journalism works as a storytelling medium. In the years that followed I audited a graduate course at New York University called The Fiction of Non-Fiction, and did a lot of work looking at how the media constructs and tells stories. In fact, I did a whole show about how [journalism] standards become standards, relative to who is holding the mic and who tells the story. It’s been a tremendous opportunity to see what I do in a new way.