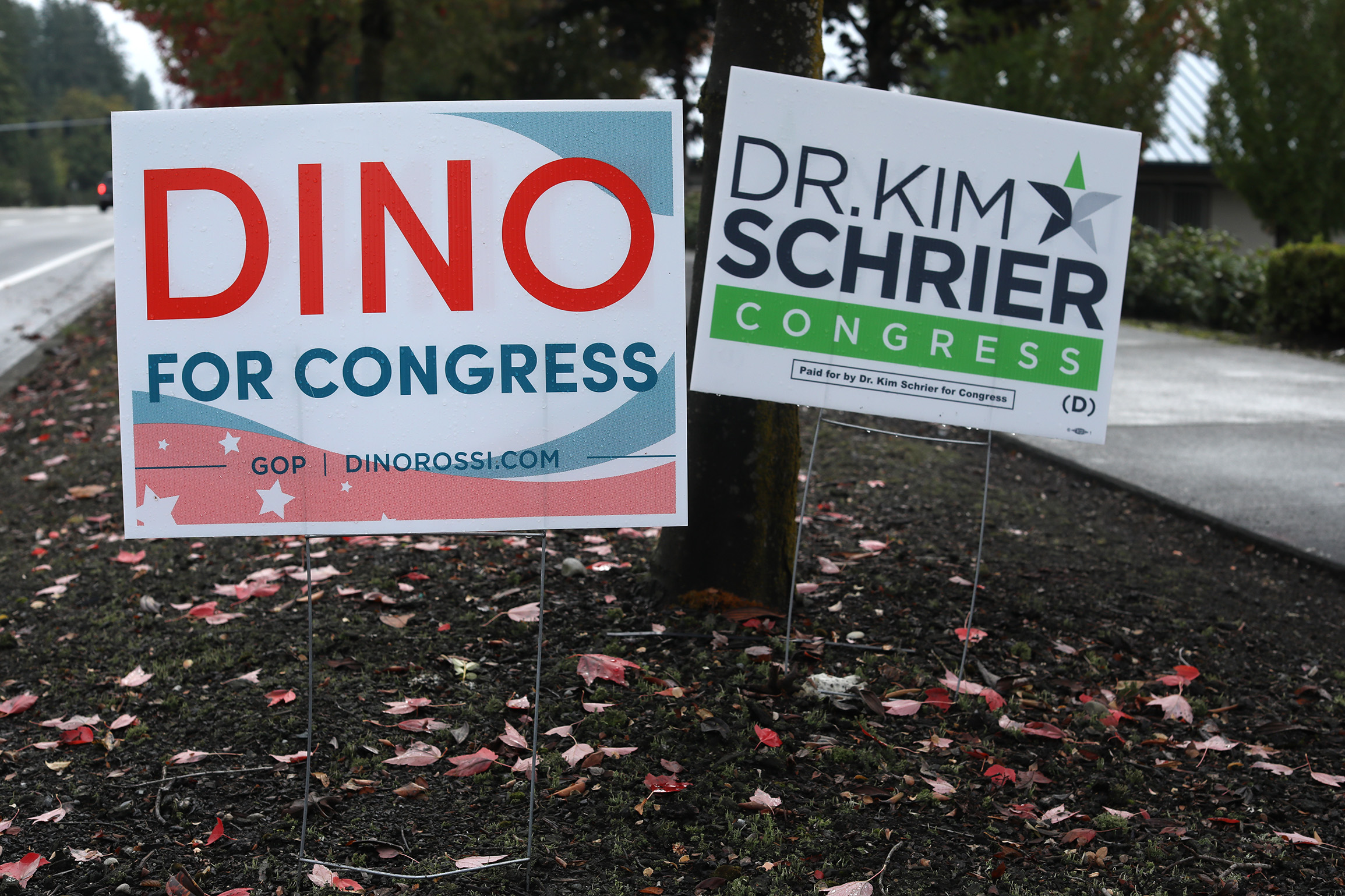 The complexion of the race for Washington’s pivotal 8th Congressional District has changed dramatically in the last week, shading from purple toward red. Whatever razor-thin advantage Dr. Kim Schrier (D) may have enjoyed from election prognosticators has evaporated in the wake of the contentious Supreme Court hearings, with Dino Rossi (R) surging to a 10-point lead, 49-39, according to a new Crosscut/Elway Poll.

Twelve percent of respondents in the poll of 400 eligible voters in the district reported that they were undecided. The poll, which was conducted from Thursday, October 4, to Tuesday, October 9, has a margin of error of 5 points.

Rossi, a former state senator and real-estate investor, saw an especially large bump last weekend, claiming a 24-point advantage among voters surveyed in the hours and days immediately after the U.S. Senate’s vote to confirm Judge Brett Kavanaugh. Those respondents made up nearly a third of the total voters surveyed.

“What appears to have happened here is the Kavanaugh hearings have erased [the Democrats’] advantage,” said Stuart Elway, the President of Elway Research and a pollster whose decades of work have earned him an A+ rating from the polling website FiveThirtyEight. “Now it looks like what you would have expected this district to look like before everyone was talking about a blue wave.”

The results also show that the race may still be in flux. According to the polling conducted on Monday and Tuesday of this week, the raised enthusiasm for the Republican candidate has cooled slightly from his red-hot 24-point advantage over the weekend. But on those days, Rossi’s advantage was still a sizable 10 points. “The question is, did we happen to be in the field and catch this blip that will even out over time or has there been a real shift there that has fundamentally altered the race?” said Elway. “We can’t know that yet.”

The polling conducted prior to the Kavanaugh confirmation looked similar to other recent surveys of the district. Just two weeks ago, a New York Times poll gave Schrier a 1-point advantage. An AARP survey of voters over 50, conducted in mid-September, gave Schrier a similarly thin advantage. Those polls make the huge swing of the Crosscut/Elway Poll something of a shock, which Elway concludes is evidence of the race’s volatility.

The apparent impact of the Supreme Court hearings on the race is not surprising when considering what the pollster found was top of mind for voters in a concurrent statewide poll: 44 percent said the Supreme Court was the most critical issue, more than any other topic. Healthcare — an issue the Democrats and Dr. Schrier have run on — was second, with 39 percent of voters saying it was the most critical.

Immigration, tax policy, the environment and trade followed, in that order.

47 percent of respondents said it's "important" or "better" to keep Republicans in control of congress. 37 percent said the same for Democrats.

For Democrats, winning the 8th — an unshapely district that snakes from parts of southern Pierce County, across the Cascades and north to Leavenworth — is part of their strategy to wrest control of the U.S. House of Representatives from Republicans. A suburban-heavy district, its residents have split their votes between the Democratic presidential nominee and the Republican congressperson dating back to Bill Clinton in 1992, a trend the Democrats would like to end, in their favor.

To flip the district, though, they will have to compete with history: since its creation in 1983, the district has sent only Republicans to congress.

Democrats became more hopeful this cycle when seven-term incumbent Dave Reichert announced his retirement, flinging the race open. Nearly every political tracker lists the race as a toss-up, with some, like Politico, listing it as leaning toward Schrier.

But Rossi is so well-known in the district — thanks to his time as a state legislator and his failed campaigns for Governor and U.S. Senator — he has many of the advantages of an incumbent. Schrier, on the other hand, is still relatively unknown.

Although Rossi’s support dropped some as the frenzy around the Kavanaugh hearings quieted, the fallout from the Supreme Court fight has local Republicans feeling confident.

“That is one race that was close before (the Supreme Court hearings) and now has moved toward a safe campaign for Dino Rossi,” said Republican political consultant Alex Hays, who was unaware of the new poll numbers at the time of our interview.

Crosscut spoke with eight voters — four for Schrier and four for Rossi — who had participated in the poll and agreed to be interviewed by a reporter.

8th District voter Susan, 65, of Covington said she was abused by two men when she was 17, so she sympathized with Christine Blasey Ford, who said she had been held down by Judge Kavanaugh at a party when she was close to the same age.

But Susan will be voting for Republican Dino Rossi this election. It’s not out of character for her: She’s voted Republican for many years, since becoming a Christian. Still, she’s especially motivated by what she perceived as Democrats mishandling of Blasey Ford’s accusations, a frustration rooted in her own abuse. “It was the way she was played by the Democratic party,” she said. “The way they used [her allegations] to hurt him.”

Sen. Mitch McConnell recently called the hearings a “great political gift” for Republicans, as national Republicans have been casting Democrats as an angry mob to galvanize their voting base. The Crosscut/Elway poll lends data to McConnell's contention, though it is unclear whether that newfound motivation is lasting.

Other Rossi voters were similarly upset by the Democrats’ handling of the hearings — viewing them as a timed political hit. “If somebody has done something when they were a teenager in high school or a very young adult and it’s 25 years later, what the hell does that have to do with anything?” said Jennifer Martinez, 50, a caterer from Auburn.

But head of the State Democratic Party Tina Podlodowski was confident the momentum was now breaking in their direction, adding to what was an already pumped-up Democratic base. “We increased our normal monthly number of new people coming to volunteer 193 percent,” she said, adding, “This past weekend we hit over 28,000 doors in Washington State and made over 50,000 phone calls.”

Podlodowski said the party is seeking to capture the anger many women have felt in the wake of the hearings, calling Rossi “anti-woman. … This is someone who is anti-choice, this is someone who has never voted for pay equity.”

Crosscut has partnered with Stuart Elway, who has been providing independent, non-partisan analysis of public opinion in Washington and the Northwest since 1992. The Elway Poll is rated as one of the top 6 election pollsters in the United States, with an “A+” grade from fivethirtyeight.com. Check Crosscut for more findings in the coming days.

HR professional Tonya Freeman, 51, of Renton, said she will vote for Schrier and is more motivated to stay informed because of the Kavanaugh hearings. “A lot of guys get drunk and party in high school and who would never do anything like that,” she said.

But among the Schrier supporters who were contacted, more pointed to her career as a pediatrician — and her support for a public health insurance option — rather than the Kavanaugh hearings, as a reason to vote for her. “She’s got experience in the medical field and the insurance industries,” said Cynthia Tucker, 69, of Roy. “I think that everybody in the U.S. should be covered under healthcare. If other countries can do it, we should too.”

Reacting to the poll Wednesday, a Rossi spokesperson said in an email, "We've been campaigning like we're one vote behind for a year now, and we're going to push hard through the next 27 days. We are certainly gratified that voters remember that Dino is a fiscal conservative with a social conscience."

A spokesperson for Schrier said the results of the poll did not square with other surveys they’ve seen, including the New York Times and AARP polls. “We’ve seen that these national news cycles really do affect how people think,” she said. “It seems like there’s a new one every week.”

With less than a month until the Nov. 6 election, each party will hunker down and begin what Podlodowski called “the utterly boring, grind-it-out work of getting every voter to turn in their ballot.”

On that front, Rossi has a large fundraising advantage, with $1.78 million on hand, nearly three times what Schrier has, according to OpenSecrets.org. The perceived importance of this race has super-charged spending by political action committees. Rossi has been the subject of $3.5 million in spending from PACs, both for an against. He received the most support from the conservative Congressional Leadership Fund. Schrier has had $3.89 million in outside spending for and against her. Much of her support came from the Democratic Congressional Campaign Committee.