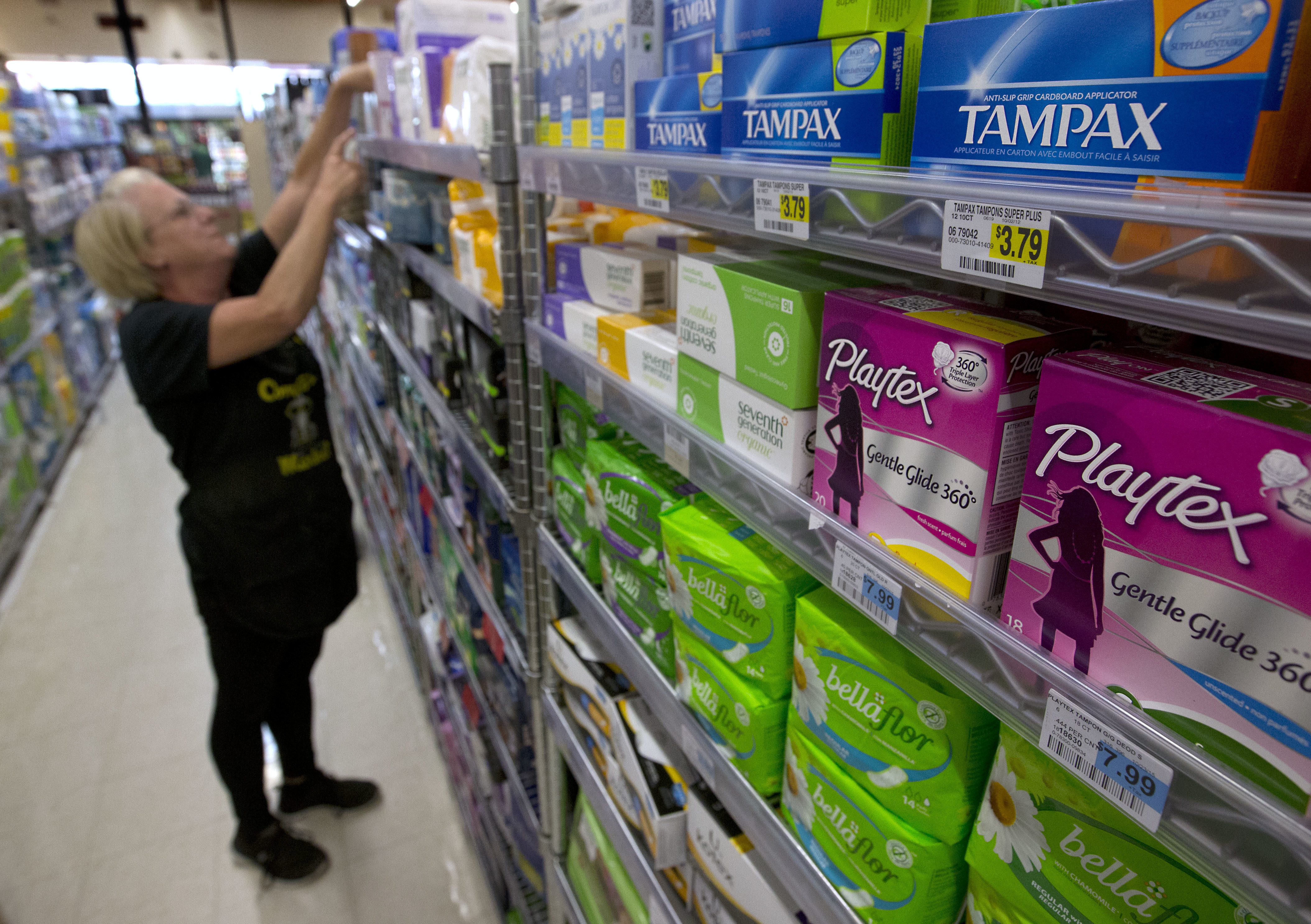 Seattle will explore whether it has the authority to exempt menstrual products from sales tax. (AP Photo/Rich Pedroncelli)

The city may soon explore lowering the sales tax on menstrual products, signaling that it could join a growing movement to end the so-called “tampon tax.”

At issue is whether the city is entitled to exempt these items from its portion of the sales tax without the approval of the legislature.

The fact-finding assignment was proposed by Seattle City Councilmember Teresa Mosqueda, who noted that the state’s regressive tax code impacts poor people at a higher rate while stating that the taxes on these products place an additional financial burden on poor people who use them.

“This is really about making sure we are creating opportunities to have a more equitable tax system,” said Mosqueda.

Whether the city can issue such an exemption, however, is unclear. Sales tax in Seattle is just over 10 percent, with 6.5 percent applied by the state and 3.6 percent by the city. Exempting the state’s share, as some other states have done, would require legislation in Olympia, but State Sen. Reuven Carlyle said it is worth looking into whether the city could exempt tampons from its local portion. “The city of course does not have the authority to exempt the state portion, but could attempt the local portion,” he said.

The city’s new effort, unveiled during a budget discussion, is the latest of a national and often bipartisan effort to exempt menstrual products from sales tax, lead by organizations like Period Equity. Currently, fourteen states have no sales tax on tampons. Nine explicitly exempt them — Minnesota, Illinois, Pennsylvania, New York, Massachusetts, Maryland, New Jersey, Connecticut and Florida — while five have no sales tax at all. More states could soon follow: Nevada passed a version last year, but now needs the approval of the voters.

Proponents note that states often exempt items considered essential from sales tax. In Washington, for instance, prescription drugs and most groceries are not taxed. But most states still do not consider tampons and other menstrual products essential.

Washington legislators have been attempting to pass an exemption for years. But even with bipartisan support, the bill has languished in committee. Rep. Melanie Stambaugh (R-Puyallup) said the impasse is not philosophical but financial. She said the estimated loss to the state’s budget through such an exemption is around $10 million — enough that finding funding to replace the lost tax revenue was a challenge. “One, it’s a hit to the state’s income and, two, you don’t have a group to rally the people to say this is important,” she said.

Former Rep. Jessyn Farrell, who sponsored a bill that would have exempted menstrual products in her last year as a legislator, agreed. She blamed the “general schizophrenia” around budget in Olympia, turned chaotic by a divided legislature and the McCleary requirements to fully fund education. “That bill got caught in those crosshairs,” she said.

She added, “On paper it’s easy for all of us to sign on, but then there’s this very real conflict” of how to make up the lost revenue.

Farrell said the alignment of power in Olympia — Democrats now control both houses of the legislature  — could clear the path for the bill’s approval. Stambaugh, who is not running for re-election, said the legislature’s success at clearing the McCleary hurdle is what makes passage of the bill more likely, rather than the shift in political power.

Part of the city’s investigation into exempting Seattle's portion of the sales tax will include penciling out how much revenue it would stand to lose. For Farrell, exempting menstrual products is only worthwhile if it doesn’t come at the expense of programs that help people. “You don’t want to do something right by the tax system only to have to cut services that low-income women would have to depend on,” she said.

What an exemption would mean for people who use menstrual products is imprecise. Huffington Post estimated women who use tampons would spend $1,773 on them over a lifetime. A 3.6 percent sales tax adds on an additional $53.

Washington State is widely considered to have one of the country’s most regressive tax systems — sluicing off a larger percentage of low-income people’s earnings than that of wealthy people’s. Seattle government in particular has chafed under this system, under which it has become reliant on increasing property taxes to raise revenue. In 2016, members of the city council passed an income tax they knew would be challenged in court.

Councilmember Kshama Sawant alluded to this Tuesday, saying she supported the exemption, but that, “I also hope that in this budget the council also talks not just about studies but also real options for raising progressive taxes at the city level.”

Councilmember Debora Juarez added that she would be interested in exploring an exemption for diapers as well. The direction to study the exemption quickly received broad support from the rest of the city council and will likely proceed after the city approves its budget in November.