Encouraged by local doctors and inspired by a Los Angeles project, Councilmember Mosqueda wants to take a public health approach to the ongoing crisis. 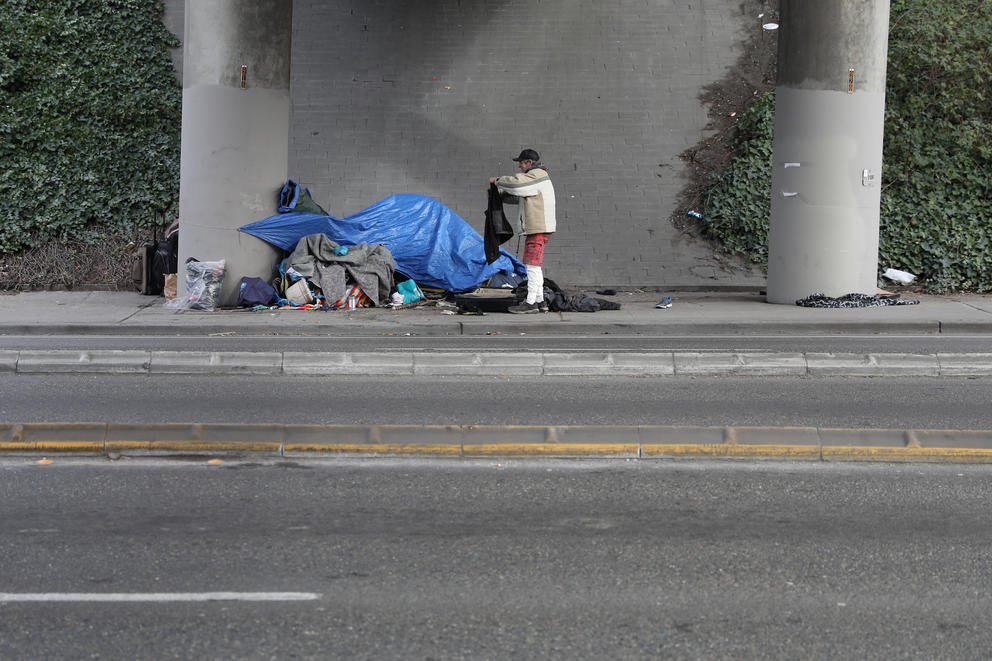 A man underneath Interstate 5 bridge on South Dearborn Street in Seattle. (Photo by Matt M. McKnight/Crosscut)

At the urging of local public health officials, Councilmember Teresa Mosqueda is proposing that the city of Seattle spend $3 million to open a “mass shelter tent” with 75 to 100 temporary beds for people living on the street.

Announced as part of the Seattle City Council’s ongoing budget deliberations, the request only includes the capital cost of setting up the tent, not the operating costs. City officials estimate it would cost an additional $2 million to run, likely bringing the total up to around $5 million for the year.

Mosqueda said Tuesday she was approached by members of the city’s medical community — including, her office said, the medical director of the Odessa Brown Clinic, Dr. Ben Danielson — who are concerned about the public health repercussions of the city’s growing homeless population.

But she had a change of heart after visiting Los Angeles last August and hearing about the city’s emergency housing development, A Bridge Home. The office of L.A. Mayor Eric Garcetti  provided a presentation on the effort, which consists of 15 shelter buildings set to open by mid-2019.

Tacoma also recently opened a tent for some 65 residents.

Mosqueda envisions Seattle's tent as an “enhanced shelter,” meaning it would have dividers, storage, showers and case mangers on site. Most of the details, including location, are yet to be worked out, but Mosqueda posited the tent could be set up on underused government-owned land or a vacant lot.

Mosqueda’s proposal comes just days before the third anniversary of the homelessness state of emergency, declared by Seattle and King County officials. The declaration was largely symbolic and now serves as a grim anniversary amid a growing problem. Since that declaration, the homeless population has grown by several thousand (methodologies have changed, making direct comparison difficult), topping 12,112 in King County, according to this year’s survey.

The city’s budget to address homelessness has grown as well, to a proposed $89 million for next year, a significant jump from about $40 million five years ago but a minor one compared to this year’s $86 million. The mayor’s proposed 2019-2020 budget does not include any new revenue sources for homelessness or housing. The council would have to pull funding for the tent from somewhere else in the budget.

The council would have had more than $20 million in additional funds, largely for housing, had a tax on large businesses not been repealed just a month after the city council passed it into law last spring. Without that new revenue to build more permanent housing, Mosqueda argued Tuesday that short-term solutions are what the council has left.

“The answer is housing,” she said, adding later, “And we also know that we don’t have the revenue to do that.”

Mosqueda’s proposal was not met with immediate enthusiasm from her colleagues.

“When I think about if we spent $5 million on our current model of enhanced shelter how many beds that would buy us,” said Councilmember Lorena González, “I suspect it would be more than 75 to 100 beds per year, but would appreciate getting an understanding of those nuances and those details so we can better evaluate and understand Councilmember Mosqueda’s proposal in this space.”

In a briefing Tuesday, council staff said on most days there were fewer than 10 available enhanced shelter beds. In August, that number was, on average, just three per day.

Dr. Danielson, who approached Mosqueda about the tent idea, has been a vocal proponent of treating homelessness like a public health emergency. He, with Dr. Bill Daniell and Dr. Chris Delecki, are the health professionals on the King County Board of Health.

The three doctors have been especially concerned about disease outbreaks in homeless encampments. In both an op-ed for Crosscut and a petition to the Board of Health, they called for treating homelessness as a “disaster,” including creating “large-scale, temporary disaster shelter infrastructure with supportive and navigation functions sufficient to serve ALL unsheltered homeless people in King County, before Fall-Winter 2018.”

But, on the recommendations of consultant Barbara Poppe, the city has shifted its focus toward moving people into permanent housing — rewarding providers who succeed and threatening to cut funding for those who don’t. “Encampments are a real distraction from investing in solutions,” Poppe told the Seattle Times in 2016. “You can see it takes a lot of energy to get them running and they don’t solve the problem. You still have people who are visibly homeless, living outdoors.”

The council will continue deliberations through most of November before voting on a final package of amendments to the mayor’s proposed $5.9 billion budget.