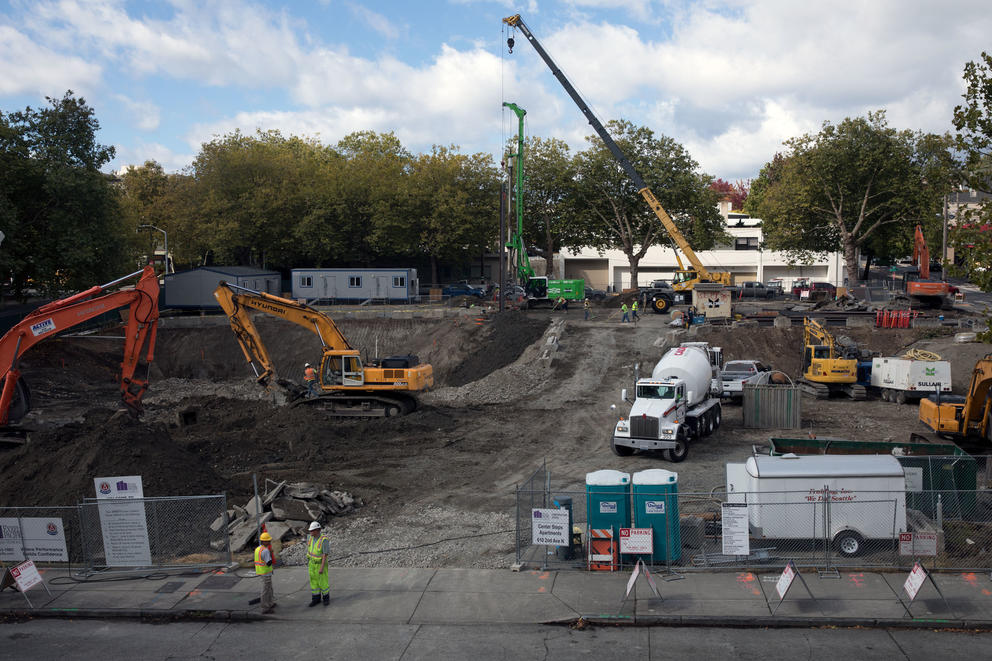 The City of Seattle owns .25 acres adjacent to the old Teatro Zinzzani theater in Queen Anne that has been identified as a potential site for affordable housing. (Matt M. McKnight/Crosscut)

As the cost of land in Seattle and neighboring cities has spiked to dizzying heights, affordable housing developers have been left with a choice. They can pay more for property in centrally-located neighborhoods with good access to transit, jobs, schools, food and services, but build fewer units of housing. Or they can maximize their housing by developing at the margins of the city or out in the county where residents will have much less access to all the things they need in their daily lives.

It is a vexing problem for a city in need of more affordable housing options and one that is unlikely to abate, since the market value of land in these central neighborhoods probably won't see a significant drop any time soon. A boost in funding for affordable housing developers is just as unlikely. But what would happen if these developers weren’t hemmed in by market values? That is the question at the core of a new tactic being employed by elected officials and housing advocates: selling or even giving away underutilized public lands on which to build housing.

Right now, much of Seattle’s new subsidized affordable housing is built by nonprofit housing developers who rely on a combination of funding from the city housing levy, state and federal grants and private sources to purchase land and pay for construction. But there’s not enough money to go around. This year, the Office of Housing received $245 million in project applications, but had only $70 million in funding to disburse. By providing land to affordable housing developers at little to no cost, the city could make those limited funds go much further.

“On dollars and cents, it’s a 15 percent boost on the money we're paying into the housing levy,” said James Madden, Enterprise Community Partners’ senior program director. “Every dollar from the housing levy that goes towards property acquisition is a dollar that can't be spent on the construction of a new home.”

The approach has seen some success in the region. In the past year, several Seattle nonprofit affordable housing developers have been able to purchase public land at a discount or have been outright gifted the land on Sound Transit surplus property. On First Hill, Plymouth Housing and Bellwether Housing were gifted a $8.7 million property on which they’ll build a 13-story building with 119-units of affordable housing. In June, Capitol Hill Housing broke ground on an affordable housing development above the Capitol Hill light rail station for which they paid below market rate. The future Roosevelt light rail station in the University District will have a similar project from Mercy and Bellwether Housing.

These developments have been the exception to a market long ruled by the highest bidder. And though giving public land away or selling it at a discount is now seen as an important strategy in Seattle and King County, making it possible has not been easy, requiring state and city legal action as well as significant work from advocates and housing providers.

And prior to Monday’s vote, local nonprofits Enterprise Community Partners and Futurewise announced that they were launching a new mapping tool to help developers of affordable housing and early learning centers to find public lands in King County on which to build.

City, county and state agencies often own property that they no longer need or is no longer serving its “best and highest use.” In many cases, agencies such as the Seattle Department of Transportation or Sound Transit have purchased land as a staging ground for construction equipment. When a project is completed, the property becomes surplus. Other times, a department might have a parking lot or a one-story building in an area that would allow for much denser residential or mixed-use development.

In the past, city departments sold surplus land to the highest bidder or to other departments and the profits from the sales would typically remain within the seller’s budget. The newly passed resolution changes that equation, making affordable housing development the top priority when a city department has land to get rid of.

“Public land can be used for the best value, which is not necessarily the highest market value,” said Councilmember Teresa Mosqueda, who sponsored the resolution. “It’s an opportunity for us to look at mixed-use development … be more creative about what we do. Maybe City Light wants a customer service center next to a child care facility, with housing above.” She argued that since there are lots of competing needs for space in the city — housing, early learning, groceries, open space, etc. — the city should be looking to maximize developments on publicly-owned properties by mixing uses.

It all started with a map. In 2015, King County Assessor John Wilson began to wonder: Is there enough land available in the county to shelter homeless residents? He commissioned a review of all the publicly owned parcels in the region — and he was stunned by the results.

The resolution also stipulates that if a department sells land for a purpose other than affordable housing development, 80 percent of the net proceeds must be directed to either the city’s Low-Income Housing Fund or Equitable Development Fund. It also requires the Office of Housing to produce an annual report about city surplus properties.

The bill that was passed on Monday affirms Seattle’s participation in a new state law passed last spring. That law grants all agencies in the state the authority to sell surplus land at below market value (all the way down to $0) when the land is going towards affordable housing construction.

It also builds off another public lands resolution passed by the city council in July. With that resolution, the council changed Seattle City Light’s land disposition policy to allow the utility to sell properties at below-market rate. Because of the precedent set by several State Supreme Court cases, the common wisdom in Seattle has been that the city would be subject to a lawsuit if it tried to sell City Light property purchased with money collected by ratepayers or SDOT property purchased with gas tax funds.

In a memo, Mosqueda legislative aide Michael Maddux argues that the new state law gives City Light and SDOT express authority to sell below market value. He also argues that much of the precedent set by the Supreme Court cases cited are not applicable to the issue of land sales.

“We’re not saying take ratepayer dollars and buy land to build affordable housing. That’d be illegal. But for surplus land sales, we can go below market value,” Maddux told Crosscut. “You might not be able to go all the way to $0 on utility properties.” It’s likely City Light or SDOT would have to sell the land at a price that would allow them to pay back however much of the original purchase was paid for by fund from utility customer bills or gas taxes. But that could still mean selling a property for many millions of dollars less than it would cost on the private market.

The issue is as thorny and complex as it sounds. It took the city council the past year to work out the legal issues surrounding public lands disposition. Meanwhile, Enterprise Community Partners and Futurewise were working on creating a new tool to map all publicly-owned and tax-exempt properties (such as those owned by churches) in King County.

The web app was created as part of Enterprise’s Home and Hope initiative, which is focused on getting both early childhood learning centers and affordable housing built on surplus public land. “It's less well known as the housing crisis, but we have a parallel crisis with early learning. With rising rents and the growing demand of a growing population, we’re seeing displacement of early learning centers.”

The tool allows users to filter by a number of parameters that a would-be developer might consider when buying property. Users can enter in the desired city, zip code, or owner, as well as the distance of a property from transit or schools or services. There is also a way to sort for the difficulty of development on site and the availability of funding sources for development for that particular parcel.

In total, the tool maps all of King County’s 11,116 publicly owned parcels, which total over 1 million square feet of land. Nearly 3,400 of those properties are in Seattle. That doesn’t mean all 11,000 properties are underutilized or available for redevelopment. But the map is meant to provide quick and easy access to information that was previously scattered to the winds.

Mosqueda said it’s the sort of information that a private developer might otherwise require someone hiring an expensive consultant, a resource that community groups and nonprofit developers likely don’t have access to.

It sounds like a somewhat obvious project, but prior to Monday’s launch there was no comprehensive list of such properties in the county. The city of Seattle knew what properties it owned, but state agencies had their own list of surplus properties within city limits and throughout the county. King County had its own list. Madden explained that having all the information in one place makes it easier for agencies to work in partnership to build the sort of mixed-use affordable housing projects or early learning centers the region needs.

Now that Mosqueda’s resolution has passed, advocates want to see the city apply the same priority to the 2.6 acres of land they own on Mercer Steet in South Lake Union. This summer, the city released a request for proposals for would-be developers of the extremely high-value land. Those RFPs are due this Friday, but a coalition including housing advocates, environmentalists, urbanist and architecture groups and transportation activists have lobbied Mayor Jenny Durkan to halt the process and revamp the RFP to either require the private developer to build a significant number of affordable housing units or to use some or all of the property for affordable housing development.

Despite the city’s new stated priority, Durkan told KUOW that, “it would damage the city’s reputation to pull out now” and that it, “be better to sell the property and use the proceeds to fund affordable housing at another location.”