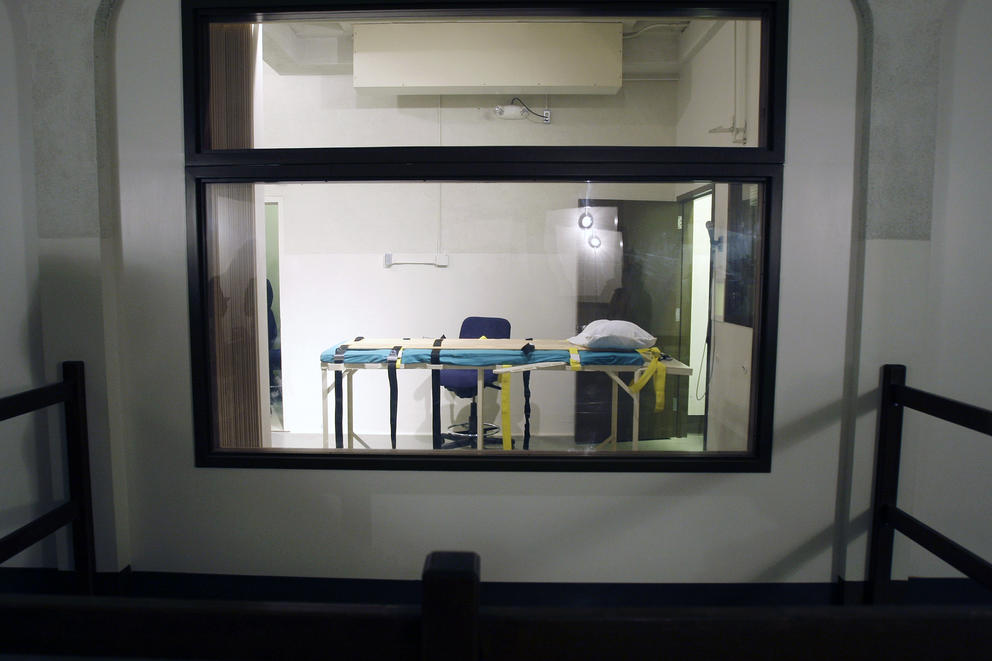 In this Nov. 20, 2008, file photo, the execution chamber at the Washington State Penitentiary is shown as viewed from the witness gallery, in Walla Walla, Wash. (AP Photo/Ted S. Warren, File)

When the news broke that the Washington Supreme Court had effectively ended the application of the death penalty in the state early Thursday morning, leaders from the realms of politics, religion and activism lined up to voice their approval.

In a statement issued soon after the decision was announced, Seattle Mayor Jenny Durkan said, “Ending the death penalty is the right decision for our state. As a former prosecutor and criminal defense lawyer, I saw that the death penalty did not work and perpetuated racial and social injustice.”

Seattle Archbishop J. Peter Sartain, meanwhile, noted the church’s support of legislation to repeal the death penalty, while offering his own praise. “We applaud the unanimous state Supreme Court decision issued today finding the death penalty unconstitutional,” he said. “The Catholic Church’s consistent belief is that every human life is sacred from conception until natural death — it is this principle that has energized our efforts for decades to abolish the death penalty.”

Approval for the court’s unanimous decision also came from representatives of the American Civil Liberties Union, which helped represent the man at the center of the case, convicted rapist and murderer Allen Eugene Gregory.

“It is a profound statement when every member of the Washington Supreme Court agrees that the death penalty is arbitrary, infected with racial bias, and must end,” said Kathleen Taylor, Executive Director of the ACLU of Washington.

At a press conference held soon after the court’s decision was released, Washington Governor Jay Inslee and Attorney General Bob Ferguson both celebrated the court’s conclusion.

“We are here to say that this morning justice in Washington state is less capricious and less tainted by racial bias,” said Inslee, who in 2014 had issued a temporary moratorium on the death penalty.

These leaders were saying what the vast majority of Washingtonians already felt. According to a recent poll of 675 Washington residents by Public Policy Polling, 69 percent supported life imprisonment for our worst offenders, while only 24 percent said they preferred the death penalty. Eighty-two percent of those identifying as Democrats favored life in prison alternatives, as did 54 percent of those identifying as Republicans.

There was also overwhelming support in the state senate to abolish the death penalty. In February, the Senate passed a bill to repeal it, with 26 senators, including five Republicans, voting in favor. Some legislators believed the bill did not have the support to pass the House, and so the effort died while other lawmakers promised to reintroduce it in the next legislative session.

Yet, ultimately, it wasn’t popular will that made Washington the 20th state in the country to do away with death row.

What finally ended the practice was something that Ferguson highlighted during this morning’s press conference: a groundbreaking study that had convinced all nine of the state Supreme Court judges that the death penalty is “unconstitutional, as administered, because it’s imposed in an arbitrary and racially biased manner.”

“The principal purposes of capital punishment are retribution and deterrence of capital crimes by prospective offenders,” read one of two opinions filed by the court. Unless the death penalty "measurably contributes to one or both of these goals, it's nothing more than the purposeless and needless imposition of pain and suffering, and hence an unconstitutional punishment.”

On page 20 of the court’s main opinion, Chief Justice Mary Fairhurst noted that from “December 1981 through May of 2014, special sentencing proceedings in Washington State involving Black defendants were between 3.5 and 4.6 times as likely to result in a death sentence as proceedings involving non-Black defendants.”

That was a reference to “The role of race in Washington state capital sentencing,” a  study conducted by the University of Washington’s Katherine Beckett and Heather Evans that found that the decision to impose the death penalty was impacted by where the crime took place, the county of residence and the race of the defendant.

In a statement, the authors of the study said: “We have been researching this issue for more than five years, and the evidence is clear and compelling that black defendants are far more likely to be sentenced to death than other similarly situated defendants in Washington's capital cases.”

“We are gratified that the Court has recognized the strength of this evidence and the importance of ensuring equality under the law."

Although not mentioned in the court's opinion, a separate 2015 study by Peter Collins and Robert Boruchowitz of Seattle University influenced the debate surrounding capital punishment. It found that seeking the death penalty, conservatively speaking, costs at least $1.1 million more per case than life in prison.

In addition, the study found that most death penalty verdicts were reversed in the end.

The “resources of the criminal justice system were completely wasted,”  Boruchowitz said.

Andrew Villeneuve of the Northwest Progressive Institute said because of studies such as these, public support of life imprisonment has soared, yet tanked for the death penalty.

"What we found most striking about the responses were that not a single subsample within the survey favored the death penalty… not even Donald Trump voters," Villeneuve said of the Public Policy Polling results.

“The Supreme Court has beaten the Legislature to the punch,”  Villeneuve said. But “the legislature can make it very clear that’s it never going to be an option by removing the statute.”

The Supreme Court did leave an opening for the legislature to counterpunch. “The legislature may enact a ‘carefully drafted statute’ to impose capital punishment in this state,” the court wrote, “but it cannot create a system that offends constitutional rights.”

Asked about the possibility of the Legislature stepping in and finding a way for the death penalty to be enacted in a constitutional manner, Governor Inslee balked. He called such attempts a “waste of time” and “futile.”

“I would heartily discourage the Legislature from trying to do that,” Inslee said while mentioning that the Legislature had previously made such attempts but failed. (Death penalty laws have been declared unconstitutional three times in the state — in 1972, 1979 and 1981.)

Meanwhile, Attorney General Ferguson said he would help pass legislation that would do away with the death penalty statute altogether, replacing it with a designation of life in prison without the possibility of parole.

But, Inslee added, “it may not be necessary because absent legislative action the death penalty is finished in the state of Washington.”