Under threat from Trump, transgender community leans on local rights 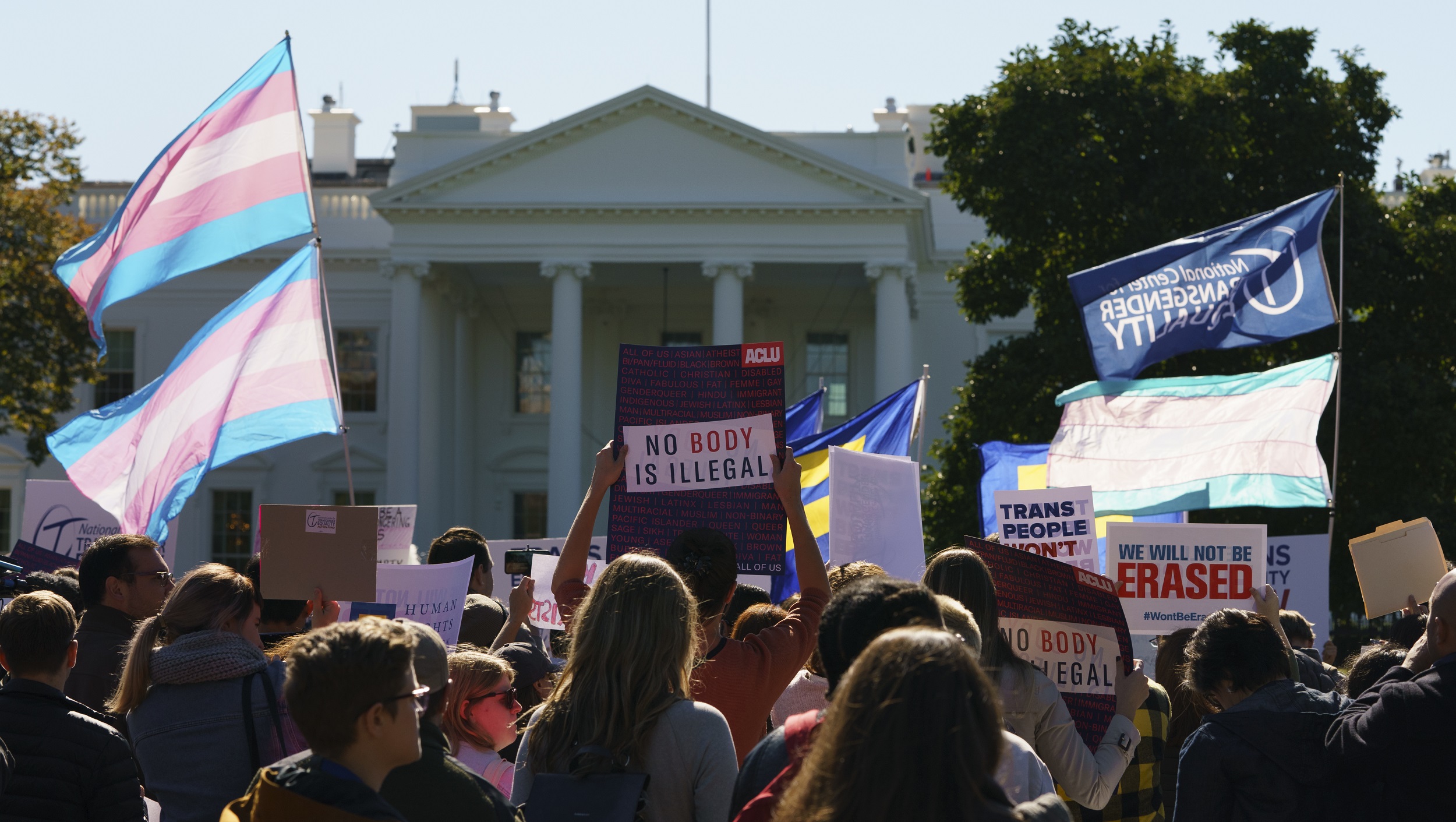 The National Center for Transgender Equality, NCTE, and the Human Rights Campaign gather on Pennsylvania Avenue in front of the White House in Washington, Monday, Oct. 22, 2018, for a #WontBeErased rally. (AP Photo/Carolyn Kaster)

On Sunday, Washington state’s transgender citizens woke up to news that the Trump administration was considering yet another attack on the hard-fought protections the community had attained in recent years. This time the president was threatening their very identities.

The New York Times revealed that a government memo, reportedly in circulation since spring, is proposing a strict definition of gender. The U.S. Department of Health and Human Services is spearheading the effort under Title IX, the federal civil rights law that bans sex discrimination in education programs that receive government funding.

Under the new definition, U.S. citizens would only be recognized as either male or female. Identity would be based on a person’s genitalia at birth, and would be unchangeable, essentially eradicating federal recognition of the estimated 1.4 million Americans who identify as a gender other than the one they were assigned at birth. This number includes approximately 32,000 Washington state residents who are transgender.

Karter Booher, executive director of the Ingersoll Gender Center, one of Seattle's oldest trans led advocacy organizations, called it a “methodical and violent attempt to erase transgender people from public life and existence.”

“We know this current administration is taking every angle it can possibly find to eliminate trans people from public life,” said Monisha Harrell of Equal Rights Washington. “It is remarkably disappointing that this administration would use their power in order to take rights away from people.”

The news of the possible shift in Title IX interpretation comes at the end of a trying two years for the transgender community. Just a month into the Trump presidency, the administration withdrew Obama-era protections that required that public schools allow transgender students to use bathrooms that correspond with their gender identity. Last July, the Trump administration also attempted to ban transgender individuals from serving in the military. Since then a series of federal judges, including U.S. District Judge Marsha Pechman of Seattle, have ruled that the military must accept transgender recruits.

“We’re all kind of reeling from this,” said Julia Ricciardi of the Seattle LGBTQ Commission. But “we have both state and city ordinances that protect gender identity.”

According to the U.S. Constitution’s Supremacy Clause, in circumstances where there is conflicting legislation, federal law reigns supreme. Yet the 10th Amendment to the Bill of Rights says that any powers not delegated to the federal government are reserved for the states, and many courts have ruled accordingly. This means that much of the work that Washington state has done to uphold the rights of its transgender citizens would stand, with or without Title IX protections.

For instance, Washington recently joined a small league of states — Oregon was the first — to offer more than two gender markers for birth certificates. In addition to male and female, Washington state residents can now choose the gender identity of “X.” Washington also recently waived a requirement that adults need a doctor's letter to change their gender identity from male to female or vice versa.

The state law underlying many of these protections is Washington’s anti-discrimnation law, which was expanded in 2006 to prohibit discrimination on the basis of sexual orientation and gender identity.

There is an element in Washington state politics that would like to see these protections rolled back, but they have so far been largely unsuccessful. The latest attempt to repeal trans people’s right to use restrooms of their choosing failed to gain enough signatures to make it onto the 2017 ballot.

There are still many rights that the community does not enjoy.

Members of the state's transgender population, for instance, have difficulty accessing healthcare in many circumstances, such as in cases of reassignment surgery. But they have advocates in state government. On Monday, Washington state Insurance Commissioner Mike Kreidler doubled down on his directive for all health insurers to “end discrimination in health insurance based on gender identity and related medical conditions.”

There are threats as well. Dean Spade, associate professor of law at Seattle University, cautions that although well-intentioned anti-discrimination laws can be “very minimally impactful” because there can be a wide discrepancy between what is mandated on paper and everyday practices.

For example, Spade says even in cities with trans-friendly policies, the transgender population is still often denied access to homeless shelters or placed in jails or prisons that do not correspond with their gender identity, either because individuals are unaware of the law or don't want to enforce it.

As a result, some like Spade are emphasizing so-called mutual aid projects, which calls for people to help each other with the basic necessities the government is attempting to eliminate. Spade, for example, suggests writing to transgender individuals trapped in prison. Others remain focused on the upcoming election and the effort to get out the vote.

For the second year, for example, the Ingersoll Gender Center has a voters’ guide. Equal Rights Washington also features 100 endorsements on its website.

“It’s another argument for voting and having a check on this president,” said U.S. Rep. Pramila Jayapal, D-Seattle.

She called the Trump administration’s memo on the transgender population, along with the president’s recent rhetoric on the migrant caravan heading for the southern border, “targeted attacks to fire up the base” in advance of the election.

“It just calls attention to the very things he wants to call attention to,” Jayapal said. “This guy is just doing whatever he can to divide and split the country.”

If there is any kind of muted response on the part of Democrats right now, Jayapal explained, it is because “we don’t want people to get distracted from Nov. 6th.”