A long stretch of foggy days has canceled flights at SeaTac and driven gray-jaded Seattleites to search Google, Twitter, Instagram and beyond for explanations. Let's clear things up. 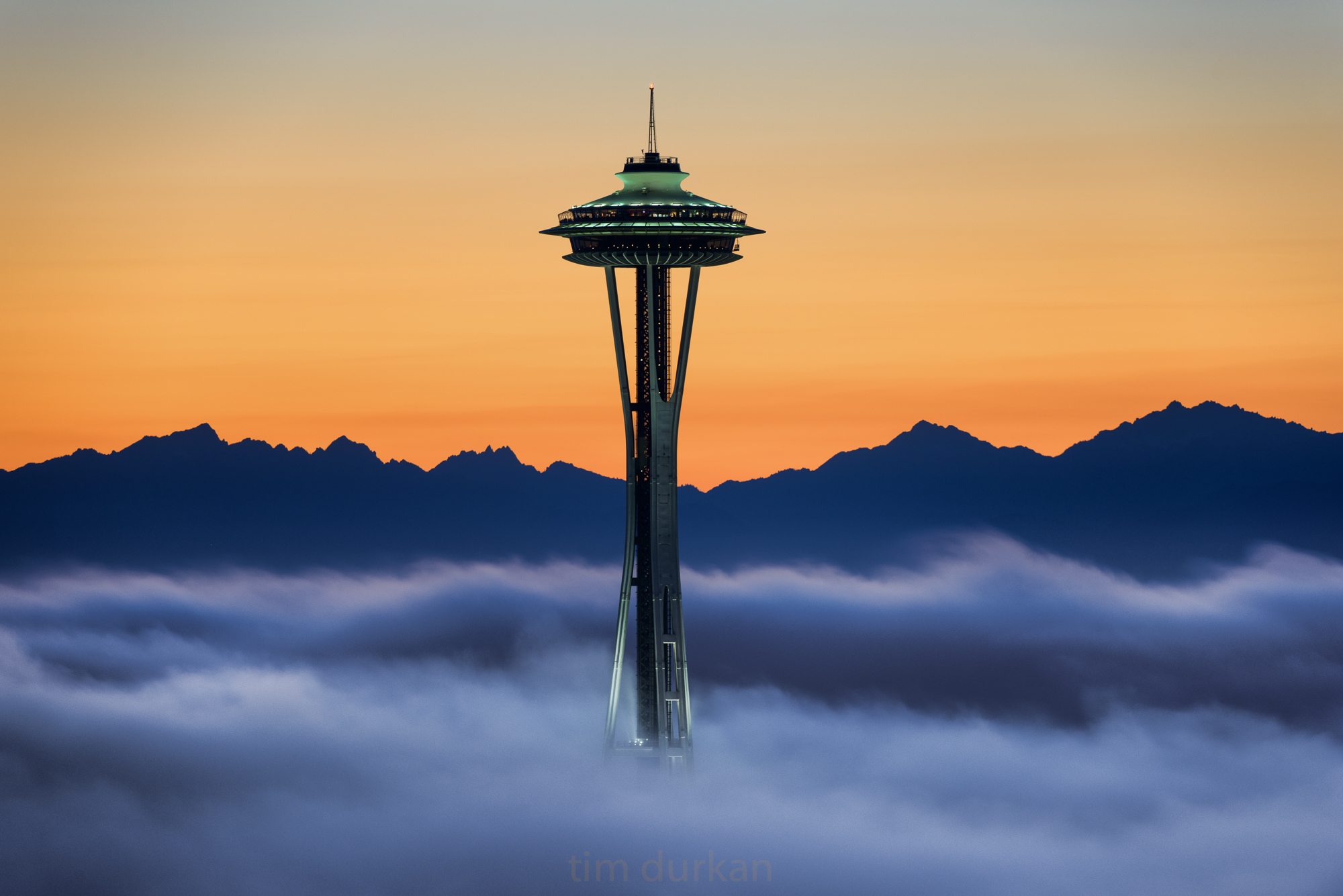 The Space Needle peeks through the fog layer. (Photo by Tim Durkan via Flickr CC BY 2.0 Attribution)

When I burst through my front door the other day into a world that felt like a cold sauna, I checked to make sure I had my glasses on. I involuntarily "whoa'd" like a young Keanu Reeves and wondered: What's the deal with all the fog?

To the surprise of this relatively recent Midwestern transplant, even seasoned Seattleites have been notably floored by the past five days' streak of heavy fog. According to Google Trends, Seattle-area searches for "fog" peaked rapidly after a year of relatively little interest; Instagram, Twitter and Facebook are full of exclamations and groan-worthy puns.

But all that fog does more than just create visual confusion and cheap wordplay. SeaTac Airport diverted more than a dozen flights to other airports and delayed 79 percent of morning flights Monday because of visibility concerns. Washington State Ferries passengers have found some of their rides delayed up to an hour.

This isn't San Francisco or London, so we're guessing you have questions. Like: Is this normal? Is this dangerous? Is this all it takes to make me miss the rain?

With my editor's blessing [Ed. note: more like 'demand'], I reached out to two prominent climatology and meteorology experts for help defogging the issue.

1. Whoa. It's really foggy out. Is this normal for Seattle? It doesn't feel normal.

The citizen journalists of Seattle social media were right to marvel at the weather. While climatologists I spoke with told me that the five-day streak of heavy fog (defined as 'fog impairing visibility to a quarter-mile or less') isn't unprecedented, it is unusual.

In perspective, the streak can be disconcerting. October sees more densely foggy days on average (seven) than any other month in the Pacific Northwest, says Johnny Burg, a Seattle-based meteorologist with the National Weather Service. Right now, we're clocking seven days of dense fog, and 16 total days with at least some fog. (The October record is eight straight days.)

But that historical average doesn't speak to streaks, which makes the recent spate of fog weird, to say the least.

"We have had some months with much more settled weather than usual in the past few years, [but] that happens from time to time anyway," says Washington State Climatologist Nick Bond. "But usually, we’d have at least a few weak storms come in and clear things things up."

To understand why October weather patterns really lend themselves to our current murky conditions, it's good to first get a handle on what fog is. If you forgot your elementary meteorology, basically it's "cloud formed at the surface," says Burg.

There are a few types of fog, but all of them depend on a phenomenon known as a weather inversion. When the sky is clear and the temperature drops below the dew point (the temperature at which water vapor condenses into liquid), moisture can get too heavy for cold air molecules to contain. Once shed from the air, homeless droplets condense around particulates and become fog, aka Ground Clouds.

Because warm air is less dense than cold air, the layers of fog “invert” below the moisture-free warm air layer and stay trapped at ground level until the temperature between layers evens out.

Which brings us to seasonal fog: Crisp, calm, cool fall air enhances fog conditions, Bond says. "This time of year, before storms start rolling in with depressing regularity, we have a lot of calm, settled weather conditions like we’ve had the last few days and things come together, and suddenly it turns foggy."

3. Why can't you just tell me when fog will appear and dissappear?

Modern meteorology can help you gauge in general if you need to ride bikes with extra caution tomorrow morning, but it can't tell you exactly what time or where. Fog is a special beast because the humidity that helps precipitate it can be highly localized, and fog appears and dissipates very quickly under mercurial, Goldilocks-exact conditions.

"The problem with fog forecasting is that subtle details can matter," Bond says. "It’s a very tricky problem. It turns out you need just a little bit of wind... and [the right humidity conditions] in the atmosphere column above the ground, not just at the surface."

How meteorologists handle that in weather modeling is part of the problem, too, Bond says. Weather instruments are essentially non-existent in the troposphere (the section of air between the ground and seven miles above us), which makes evaluating weather near the surface difficult.

"If we had continuous measuring every 100 feet up we could probably do a lot better," he says. "Right now the computer models that we have... are good at getting large-scale pressure patterns, and things like winds over large areas, but not really the local effects."

To make predictions, forecasters will monitor the difference between the current temperature and the dew point, which allows for accuracy "certainly within a degree," Bond says. But even then, fog doesn't always appear with temperature shifts.

4. Should I be worried? It's nearly Halloween, and the climate feels like it's coming apart at the seams, and now all this creepy fog.

Before you hyperventilate, remember that 1) localized weather patterns don't necessarily indicate shifting climate patterns, 2) October is always a great time for fog-spotting, and 3) even climate-concerned scientists we spoke with aren't worried about it. They call it a "nuisance" more than anything else.

You should start worrying if you have travel plans or — more ominously — when fog becomes smog.

Smog is simply fog with an excess of particulates, and it happens when fog stays in town too long. When hot air traps cold foggy air near the ground, that cold foggy air traps particulates, which means carbon emissions created at the surface end up trapped down here with us rather than dissipating via weather exchange (storms, fronts, etc.). The Puget Sound Clean Air Agency rated the air quality in Seattle as moderate to unhealthy for sensitive populations over the past few days, but it has since returned to normal.

"If [the fog] were to hang on too much longer, then that gets to be kind of a drag," Bond says.

Smog tends to be more of an issue in the winter. Why? Blame people with fireplaces and wood stoves: Active wood burning, Bond says, is worse for localized carbon pollution than automobiles. "Cars are a lot cleaner than they used to be, with minor exceptions."

5. Is fog really all that bad?

I'm about to let you in on a little weather secret that promises to shake up the PNW outdoor scene. Fog not only makes for spooky-pretty pictures, but also indicates that it's not a bad time for certain types of recreation.

"On days where there's really thick fog [near you] in the morning, those are some of the best days for hiking," Bond says. "You can get above the fog and the clear skies that help create it."

Fog is a low-elevation phenomenon. When hiking takes you to the mountains, it's easier to rise above the inverted layer of cold air — and because fog happens on calm days, heading to the mountains means you're more apt to find clear, warm conditions. At Paradise Ranger Station, Bond says, it can be 20 degrees warmer than at sea level.

7. Now that I know so much about fog, I kind of don't want it to go — especially since that probably means rain.

You'll always have your spooky, pretty photos — like this one contributed by a Crosscut reader: 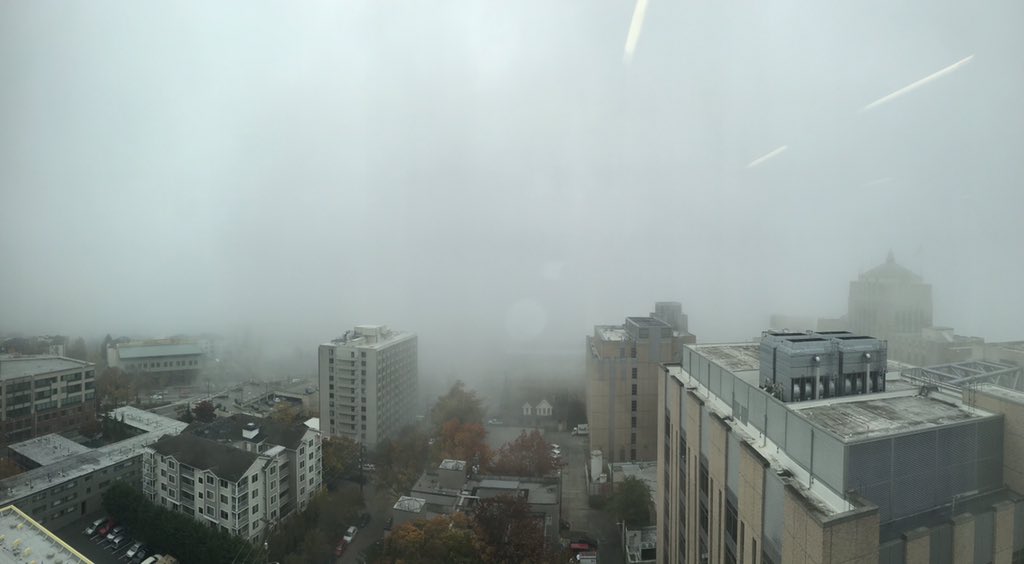