Why blocking Kavanaugh may be worse than the alternative 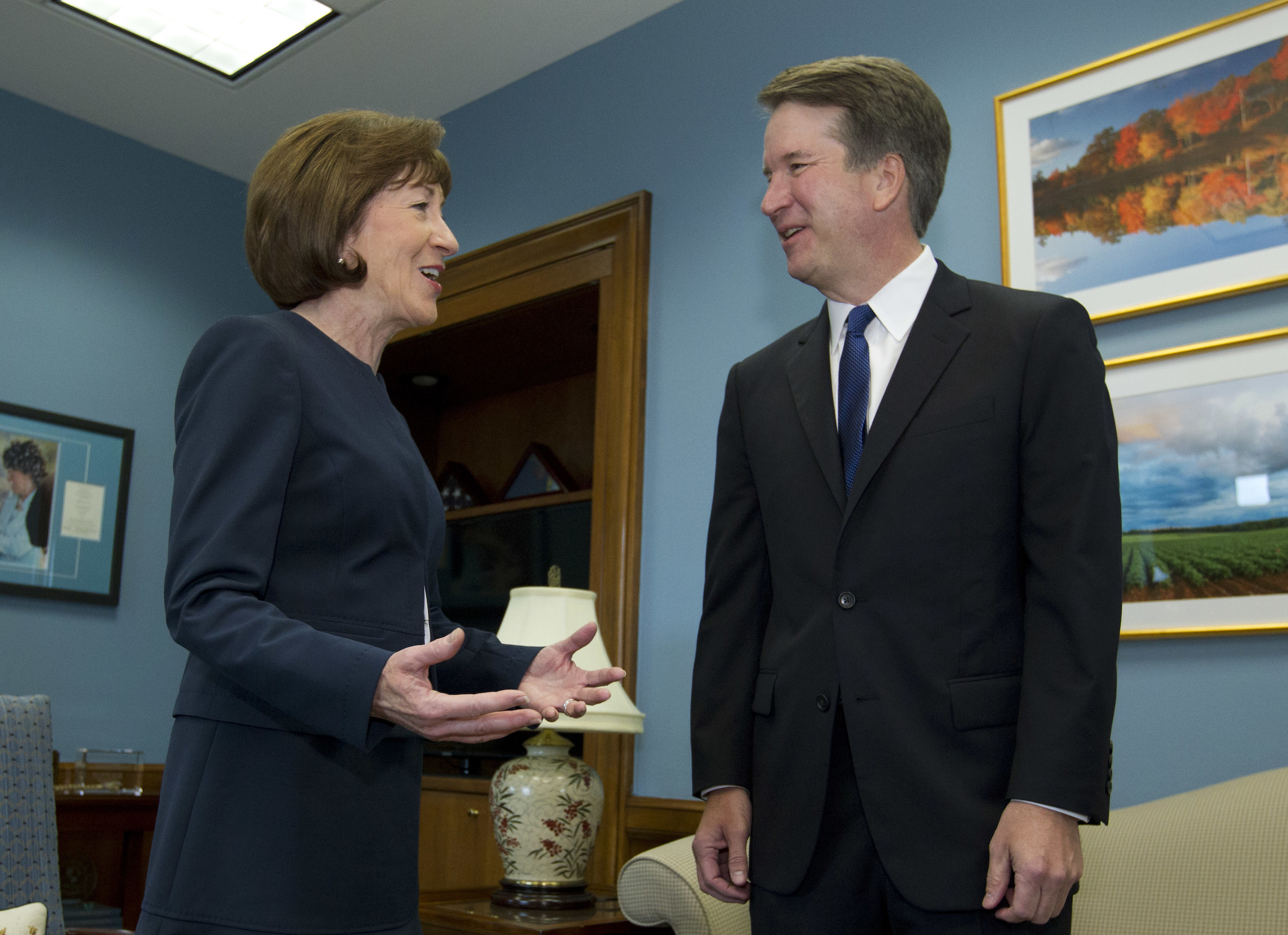 In this Tuesday, Aug. 21, 2018, AP file photo, Sen. Susan Collins, R-Maine, speaks with Supreme Court nominee Judge Brett Kavanaugh at her office, before a private meeting on Capitol Hill in Washington. Collins has been one of the targets of efforts to get Republican senators to oppose his confirmation..(Photo by Jose Luis Magana/AP)

She said, he said. It’s hard to get excited about translating stupid things a boy says in his high school yearbooks, or debating the propriety of throwing ice at a college bar. There are holes in a girl’s story, more questions than answers about the past. I'm so done with the whole thing.

Watching from a ranch in central Washington meant too much time on C-SPAN, Twitter and Facebook.  A common reaction to Dr. Christine Blasey Ford’s testimony last Thursday has been “something happened, we just don’t know who, when, what or where.” Memory is a tricky thing in trauma.

And so the social media posts breathlessly list perceived inconsistencies in either Christine Blasey Ford or Brett Kavanaugh’s testimony in front of the Senate Judiciary Committee. Or memes pointing out the hypocrisy of Democratic senators who are now having a case of the Victorian vapors over activities they’ve not bothered to condemn in their own party or themselves. Or there are passionate exhortations to Republican senators to stick with the tribe.

No thinking person condones sexual assault, but there is a suck-it-up cultural streak in the red tribe that says be resilient, get over it, don’t be a victim forever because you were a victim once. It can come off as uncaring to the blue tribe and as fingernails on a chalkboard to women who have lived through sexual assault. Ask Kellyanne Conway, who unexpectedly and unscripted came out with her own story in an interview with Jake Tapper of CNN.

Conservative women have stories, too. They also worry for the boys and men they love. And men worry about being targeted with unsupported allegations, have their own stories of less public but no less professionally damaging wringers. From a sampling of conservative social media posts — which tend to dominate my feeds — crossing my screen in the last week (names changed because it’s such a mess):

Janet: “I’ve tried so very hard to avoid this topic because it’s so very personal to me. But it just won’t go away. I’m getting pretty angry that it’s not over yet. I hope voters see how manipulative Democrats are being, but I fear Republicans aren’t handling it well.”

Kenneth: When women are talking “... men will be unsure what their motive is. Does it implicate us? Does it serve some ideological or political movement? Are they trying to whip up a mob? Far from getting to the bottom of things, they're only more obscured.”

Julie: “Voters of all parties are beginning to see the danger here that has been unleashed. Guilty until proven innocent — and little evidence of innocence to be acceptable.”

Karyn: “Where is the “exhausted” emoji?  How do we plow through this mess...”

Sen. Dianne Feinstein could have done the right thing and brought this to the committee when she learned of it to allow for discreet FBI interviews before memories were tainted. That's the bipartisan process. It was in the best interest of a vulnerable Dr. Ford and the country but not the interests of her party. Sen. Chuck Schumer and Washington’s Sen. Patty Murray, among others, proudly announced all-out opposition and urged action to block the appointment immediately after Kavanaugh was nominated. And they are going all out, without respect for who or what gets hurt. It has damaged the country more than any court decision by destroying respect for the process, the Supreme Court of the United States and the Constitution itself.

President Donald Trump could have done the right thing and kept his mouth shut for a few more days. He had been showing uncharacteristic restraint on Twitter, then went to a rally and couldn’t resist playing to the crowd. As usual, he is a mirror. He reflected the crowd’s skepticism of Ford’s curious memory and their dismay at using vague, distant allegations as a basis of judging a man today.

Kavanaugh had no right thing, no right way to react. If he had been cool and dispassionate while testifying last week, Democrats would have said "he must be guilty." Displaying righteous indignation at a false accusation against him prompted “he’s too angry to be a judge.”  The charge lacked credibility, coming from a blue tribe that had condemned him before he even started.

It was, for me, surprisingly refreshing to see a real person sitting there; judicial interviews are usually boring. And if any justice can be expected to have empathy for the wrongly accused appealing to the Supreme Court as a last resort, it will be Kavanaugh.

The Democrats have gambled on using the hearings to build a blue wave. They have seriously underestimated how showing their desperation to hold onto power through an activist Supreme Court has stirred up Republicans and conservatives. It has confirmed for anyone who held their nose and voted for Trump that they made the right choice, if their goal was seeking a return to an originalist focus on the Constitution.

Sanctimonious statements about bipartisanship out of the Senate on either side are not credible. For conservatives, it’s hard to miss the concurrent hypocrisy shown by Democrats shouting "believe the woman" while a Democratic investigation of Keith Ellison's accuser called her allegations of abuse “unsubstantiated.” It’s not about truth, it’s politics.

With all the focus on pinning Judge Kavanaugh down on the importance of precedent, to deny him the appointment now based on a blatant political attack with increasingly farcical allegations would be a very bad precedent.

The Senate has two choices. Seating him will not bring peace or respect back to the court. But neither will refusing to seat him. Given there is no win-win choice, which lose-lose option is better?

I believe we have a better shot at healing if Judge Kavanaugh is confirmed to the United States Supreme Court. Because no matter who wins control of the Senate in the mid-terms, going through this all again before the end of the year with another nominee is too ugly to contemplate.