8 takeaways from a muddled midterm election 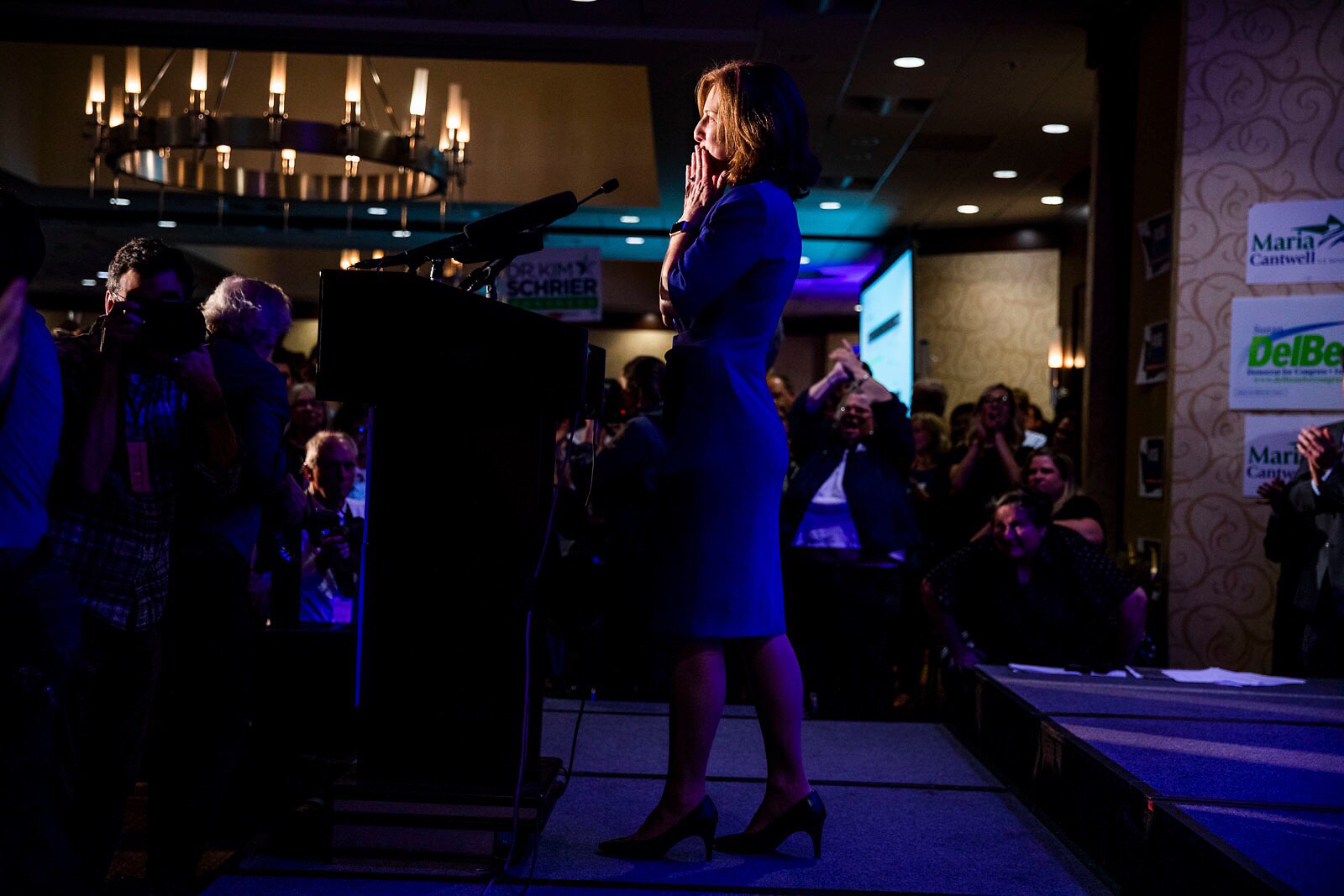 Democratic congressional candidate Dr. Kim Schrier blows a kiss as she celebrates with the crowd while maintaining a lead during the Democratic results reception at the Hilton Bellevue on Tuesday, Nov. 6, 2018. She has since been declared the winner. (Photo by Dorothy Edwards/Crosscut)

There were eight takeaways — four national, four local — that go beyond the common meme of “R’s take the Senate, Dems take the House and do well in Washington state.” They help explain why the election seemed to go in different directions at the same time.

On Tuesday Donald Trump did exactly what he did two years ago: Focus on states that would yield the results he needed to win. It worked. He concentrated on states he carried with competitive Senate and governor’s races: Ohio, Florida, Georgia, Indiana, Missouri, North Dakota and Arizona. Almost all of his candidates won, although Montana stuck with incumbent Democratic Sen. Jon Tester.

But on the West Coast, Washington, Oregon and California continued tacking left, up and down the ticket.

Some purple states, like Nevada drifted blue, narrowly replacing its Republican senator with a Democrat, and electing Democrat Steve Sisolak to succeed retiring Republican Gov. Brian Sandoval. But Florida, a state Obama won twice, replaced its Democratic senator with Republican. Colorado inched leftward, North Carolina, rightward. And there were surprises. Red Kansas opted for a Democratic governor. Alaska elected a Republican governor, who replaces an independent — who dropped out late in his re-election campaign and endorsed a Democrat.

2. The Senate means much more than the House

The dirty little secret of this election is that it wasn’t really going to change policy very much. The great majority of Donald Trump’s agenda has already passed. Yes, the Democrats now control committees, which means they can launch, or relaunch investigations of the president’s taxes, business deals, etc. But absent a stunning disclosure from Bob Mueller about Russian collusion that a House investigation, a Senate investigation, an FBI investigation and a Bob Woodward investigation haven’t uncovered, it’s reasonable to assume that most Americans outside Resistanceville would prefer that Congress do more legislating and less investigating.

It’s the Senate where federal judges and Supreme Court justices will be confirmed, along with all new cabinet officers (starting with the attorney general) and agency heads. And it’s the Senate that will decide the fate of the administration’s trade deals. Having 54 or so votes is a huge advantage over the 51 votes Republicans scrimped by on for the last year. And the new senators are likely to be more supportive of Trump, given what he did to elect them. Two departing Republicans, Bob Corker of Tennessee and the aptly named Jeff Flake of Arizona, will be replaced by Trump stalwart Marsha Blackburn and former combat pilot Martha McSally, who appeared with Trump at two rallies in late October.

3. Beto was an overrated Bust

The most famous candidate in either party was Robert Francis “Beto” O’Rourke, trying to deny Ted Cruz a second term in the Senate. The media narrative was that even if he lost, Beto had “really” won by showing Texas how to move beyond tumbleweed conservatism toward a more progressive direction. O’Rourke had $70 million dollars (50 percent more than Cruz), Kennedyesque good looks, adoring media coverage, mountains of volunteers and Hollywood groupies. Plus, he was running against someone who is brilliant but also abrasive and off-putting even to many Lone Star conservatives. With all that, Beto still lost by three percentage points. So that’s the model? Run a candidate with movie star looks, tons of money and doting media against a relatively weak candidate and he’ll lose by a less than usual?

Each of the four Democratic senators who lost Tuesday had voted against confirming Brett Kavanaugh. In contrast, the lone Democrat who voted for him, West Virginia’s Joe Manchin, won despite running in a state Trump carried by 42 percentage points.

5. Jay Inslee had a tough night

Gov. Inslee, who also heads the Democratic Governors Association, left the state in the last week of the campaign to bask in the excitement of Andrew Gillum’s candidacy for Florida governor, and Stacey Abrams’ bid in Georgia to become America’s first African-American woman governor. They both lost, so no afterglow. Then his Big Lift, the carbon fee Initiative 1631, went down to a thumping defeat in an otherwise great night for Democrats in Washington.

Inslee has now swung and missed three times on green legislation: He failed to get cap and trade through either house early in his administration. Ditto with his recent bid to get a carbon tax passed in the Legislature, and he didn’t come close with I-1631. Consolation prize: He will have more Democrats in both houses of the Legislature come January.

6. King County Republicans had an even tougher night

The August primary was a nightmare for Republicans, exposing a potential loss of more than a dozen seats in the state House and almost half that many in the Senate. Losses like that would have made GOP legislators as influential in Olympia as people touring the Capitol. The Democrats would have plenty of votes to pass whatever they wanted without a single Republican vote. But on Tuesday, Republicans made up substantial ground virtually everywhere in the state — except King County. There are 42 legislators in the House and Senate within King County, which comprises about 30 percent of the Legislature. Of those 42, one (1) as of this writing is from King County. The other 41 are Democrats. This is astonishing.

Statewide the Republicans had 48 House seats to the Democrats’ 50 heading into the election. They will now have closer to 42. They had 24 Senate seats to the Democrats’ 25. Now it’s looking closer to a 22-27 gap, as Republican Mark Miloscia, himself a former Democrat, is trailing in Federal Way’s 30th Legislative District. The Republicans cannot be viable players in Olympia politics without improving their numbers in King County.

Democrats understandably thought that a carbon tax initiative would “bring out our people.” Instead it brought out more than $30 million from the fossil fuels industry, pointing out that the “pollution fee” was a disguised gas tax that would start at 14 cents a gallon and steadily escalate. That money, along with the more than $20 million from the soft drink industry to push I-1634’s prohibition on local soda taxes, probably brought out enough redish voters to keep the August primary from being repeated in November.

Much has deservedly been made of the number of women who ran and won local, congressional and statewide offices across the country. Here in Washington, fully half of our 10-member U.S. House of Representatives delegation will now be women: Suzan DelBene in the 1st Congressional District, Jaime Herrera Beutler in the 3rd, Cathy McMorris Rodgers in Spokane’s 5th, Pramila Jayapal in Seattle’s 7th, and newly elected Kim Schrier in the 8th. Include our two senators, Patty Murray and the just re-elected Maria Cantwell, and a majority of our congressional delegation is now female.

But if voters preferred women this year, they weren’t enamored with former legislators of either gender or either party running for higher office. Dino Rossi was an effective and powerful legislator. Lisa Brown, running in eastern Washington, was Senate majority leader in Olympia. Both fell short in congressional bids. Sometimes an impressive resume doesn’t help in politics. Occasionally it’s even a drawback.