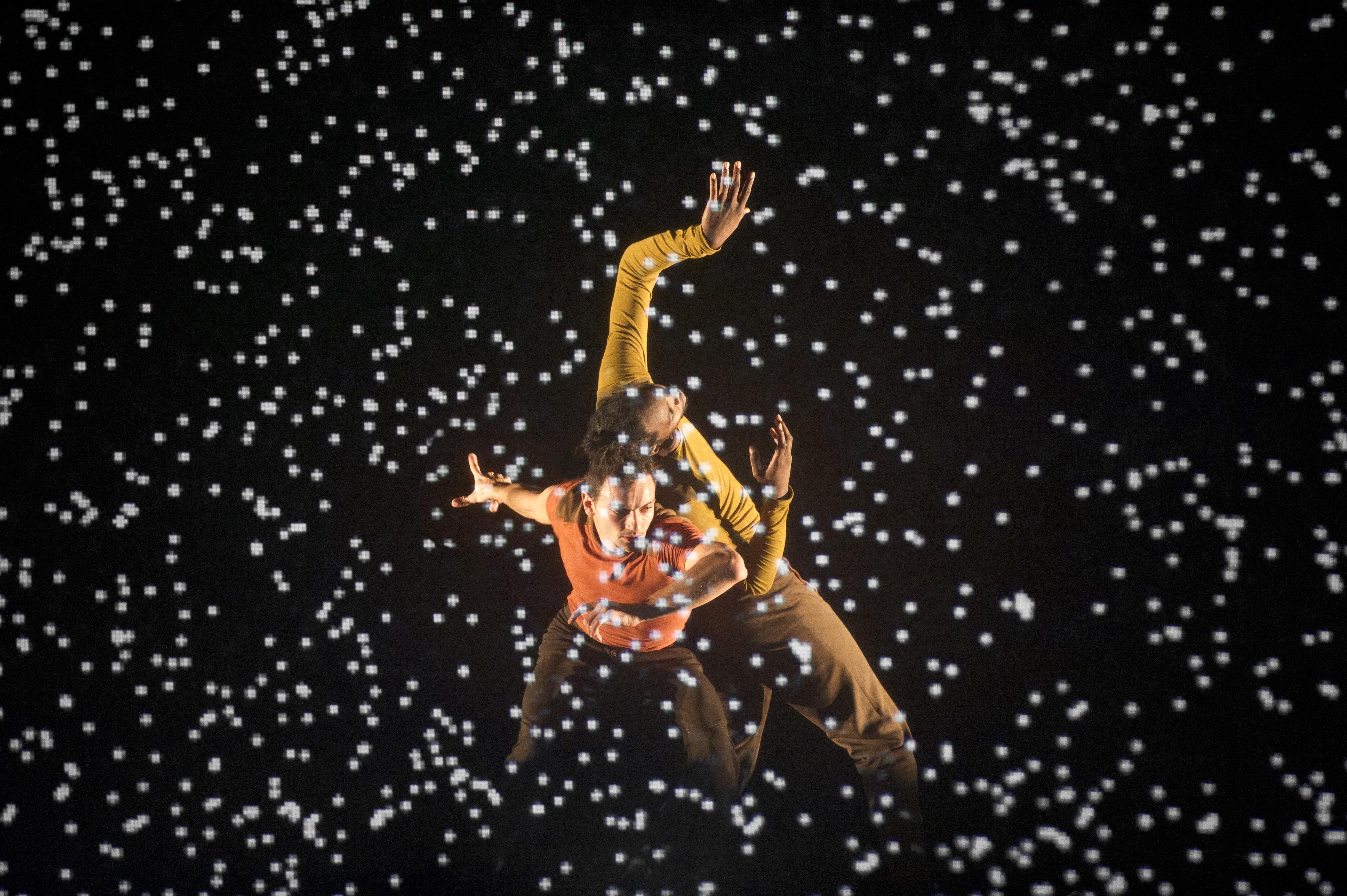 Digital wizardry (and wizardly dancing) combine in Compagnie Käfig’s Pixel, an evening-length work by French/North African hip-hop-artist-turned-choreographer Mourad Merzouki. Judging from the YouTube trailer for Pixel, the piece goes well beyond the usual dancer-in-front-of-a-video-installation parameters. Instead, individual performers interact with shapeshifting dots, swirls, nets, ripples and rigidities of light. They hop over it, chip away at it, splash through it, brace themselves against it with umbrellas. They leap over chasms formed by it or let it wrap itself around them like a billowing shawl. This is the company’s first appearance in Seattle, and frankly both the dancers and the high-tech components of the show look amazing. — M.U.

One way to get deeply attached to a dance company is to see them up close — and you can’t get much closer than at Spectrum Dance Theater’s Madrona studio on Lake Washington. Occurrence #5 takes place there, and apart from the proximity of the performers, it’s also an opportunity to revisit previous works by Spectrum artistic director Donald Byrd. The Occurrence programs are modeled on legendary choreographer Merce Cunningham’s Events, in which freshly choreographed material and excerpts from existing dances were assembled in a newly sequenced medley and sometimes given a site-specific twist. Byrd’s Occurrences are a revealing way to see his choreographic mind at work as he tweaks and recontextualizes pieces from his past. In this installment, excerpts from Byrd’s A Rap on Race will be set amid entirely new dance passages. Occurrence #5 kicks off Spectrum’s 2018-2019 season, which is collectively titled Woke?!?! — M.U.

The Hugo House kicks off this year’s literary series — the first in its sleek new space — with the theme “Diving into the Wreck” (hat tip to Adrienne Rich’s classic collection of feminist poetry). Three fiction writers, Lauren Groff (Fates and Furies), R.O. Kwon (The Incendiaries) and Seattle’s own Kim Fu (The Lost Girls of Camp Forevermore) will present new wreck-related writing. Also on the bill is local singer-songwriter Shelby Earl, who’ll grace the crowd with new tunes about digging deep. — B.D.

Since 2010, Bellevue Arts Museum has presented bountiful biennial group shows celebrating specific genres — clay, fiber, wood, metal and, now, a Northwest specialty: glass. This juried exhibit features 47 established and emerging artists, none of whose last name is Chihuly. Many of the featured artists use glass in unconventional ways. Etsuko Ichikawa “paints” with molten glass, Carol Milne “knits” with loops of glass, and Anna Mlasowsky composes a magnificent (and wearable) dress of glass scales. If you don’t know the difference between blown, cast, stained and frit glass, now’s your chance to get crystal clear. — B.D.

Prompted by congressional attempts to defund Planned Parenthood in 2015, the #shoutyourabortion (SYA) movement began in Seattle as an attempt to remove the secrecy and stigma of abortion. Though the name evokes yelling, the rallying cry isn’t radical. On the contrary, it’s pretty understated: “Abortion is Normal.” SYA proponents argue that given the sheer commonality of the procedure (1 in 4 American women have abortions), it shouldn’t be a shadowy topic. In that spirit, SYA launched a website where women can share their stories, and now, a new book. The first-person stories collected in Shout Your Abortion reflect the sheer diversity of women who have had abortions, and the personal reasons they made the choice (whether legal or illegal in the time and place they lived). The stories ring with sadness and humor, fear and empowerment, and are united by a desire to no longer feel alone or ashamed by the decision. At this book release event, you’ll hear from activist Amelia Bonow (who edited the collection with Emily Nokes) and contributors Lesley Hazleton, Miki Sodos, S. Surface and other women dedicated to preserving a woman’s right to choose. — B.D.

This venturesome string quartet touches down in both past and present in its upcoming concert. The first half consists of four newly commissioned works by female composers, including Pulitzer Prize-winner Caroline Shaw (whose Schisma ponders “the break between peoples, and … the search for hope and new growth within the breaks and crevices”) and Peruvian-American composer Gabriela Lena Frank (whose Kanto Kechua #2 draws on “motifs from native Andean folk music”). Beethoven’s late-phase masterpiece, String Quartet in A minor, Op. 132, rounds out the program. — M.U.

In his appearances with the Seattle Chamber Music Society, this gifted pianist has shown a precise yet delicate keyboard technique that can make gossamer flourishes feel adamantine-clear. In his recordings, he demonstrates a complete, eloquent ease with every challenge that Ravel, Debussy and Schubert can throw his way. His talents come accompanied by wide-ranging ambition, and the program for this recital runs the gamut from Baroque composers (J.S. Bach, Handel, Rameau, Couperin) to one of the latest works by British composer Thomas Adès. There’s some Ravel, Ligeti and Barber on the bill, too. The concert concludes with Brahms’ Variations and Fugue on a Theme by Handel, in which 18th- and 19th-century sensibilities collide. — M.U.

A painting called “Pastoral” sounds serene, right? And at first glance, Montreal artist Peter Ferguson’s oil-on-panel by that name does resemble a genial homage to Currier-and-Ives wintertime scenes. But a closer look reveals a horror-movie scenario in which a wanderer in the woods is being devoured by a cleverly camouflaged reptilian monster: eyeless, sharp-fanged, snow-colored. Ferguson has complete command of his medium and uses his virtuosic skills to channel the preposterous worlds that exist inside his head. He likes his paintings dimly lit, as if they’d been recently retrieved from a dusty attic where they’d languished for decades — or maybe even centuries. (The bright snowy woods of “Pastoral” are atypical.) Symbolist extravagance, Bosch-busy activity and surreal inconsistencies of scale are the hallmarks of his work. A vein of macabre humor runs through the paintings, too, and he’s fond of visual puns. (“Springtime Migration” depicts shrubs on the move as a cherubic young man herds them along.) If you’re looking for imaginative realms swarming with gods and monsters, this is your show. — M.U.

Art historian (and Soviet spy!) Anthony Blunt once described French artist Georges Roualt (1871-1958) as “a fervent Catholic … reacting to the conditions of the 20th century.” In France, those conditions included two world wars, four years of Nazi occupation and the attempted extermination of the Jewish population. No wonder Rouault “held up the teaching of the Gospel as a solution for present-day problems.” The 58 etchings in Rouault’s Miserere series are his testimony to human suffering and to his faith. (“My only ambition,” he declared, “is to be able someday to paint a Christ so moving that those who see Him will be converted.”) In this museum-worthy show, Davidson Galleries displays the complete series. The engravings, based on Indian ink drawings Rouault made during World War I, are a somber wonder. The compositions are simultaneously simple and bold. The titles range from satirical jabs (“The Society lady fancies she has a reserved seat in Heaven”) to nihilistic despair (“Even the ruins have been destroyed”) to mystical paradox (“Sometimes the blind have comforted those that see”). There’s a stoic strength, a sense of bone-deep resilience and transcendence, in this work. — M.U.

If you go: Davidson Galleries through Dec. 2 (Free)