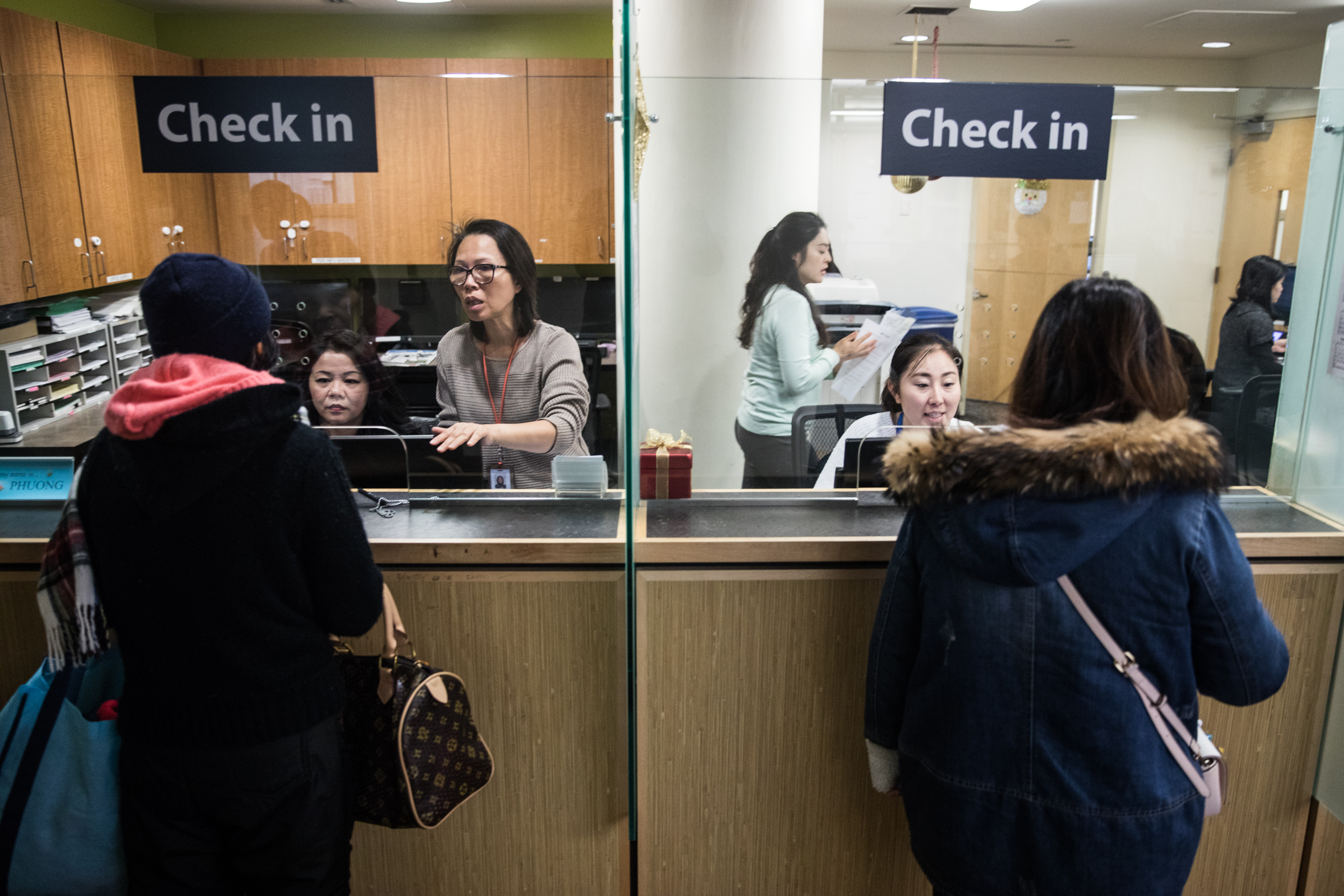 Doctors, nurses and other health-care professionals are seeing fewer lower-income patients these days. The reason, health and policy experts say, is a proposed rule from the Trump administration that has yet to take effect, but is already having an impact.

Aliya Haq, a nutrition services supervisor at International Community Health Services, says she’s had patients walk away from government programs that provide medical benefits because they’re afraid of being deported. Overall, Haq has seen a 10 percent drop in enrollments at ICHS clinics and as much as a 25 percent drop at its Shoreline clinic in a government program for low-income women, infants, and children, otherwise known as WIC.

“I don’t know what will happen to them,” Haq said. “I’m afraid the maternal and infant mortality will go up.”

What’s more, Haq says, the drop in enrollments will likely lead to fewer immunizations, which could potentially impact the overall community.

“If the administration is thinking they are saving money, they are in for a surprise,” Haq said. “There are going to be more sick people out there.”

Last month, the Department of Homeland Security published a proposal to change the definition of a person who has become, or is likely to become, a so-called “public charge” — primarily dependent on government programs for subsistence.

Currently, the definition of a public charge is limited to immigrants who use federal cash assistance programs, such as Temporary Assistance for Needy Families, which provides households with financial help, as well as those who rely on government-funded long-term institutional care.

The draft proposal encourages the government to weigh a much wider range of factors in determining whether someone should be deemed a public charge and therefore be denied a green card or not allowed to extend or change their temporary status in the U.S.

According to the proposal, the definition of a public charge would include anyone who uses government assistance programs such as federal public housing, Medicaid, the Supplemental Nutrition Assistance Program, or food stamps. So would factors such as being a child or a senior and having certain health conditions, limited English ability, less than a high school education and a poor credit history.

“The first thing they’re trying to do is scare people to death,” said Sonya Schwartz, a senior policy attorney at the National Immigration Law Center, referring to the wide range of factors being considered under the public charge proposal. “A lot of their goals are already playing out for them.”

“You have to have achieved the American dream before you get here,” she added.

The nonpartisan Migration Policy Institute estimates the number of noncitizens who could be deemed a public charge would rise from 3 percent of that population to at least 47 percent nationally. In Washington, at least 244,800 people could be affected, according to the report.

So for more than a month now there’s been a campaign led by hundreds of nonprofit agencies to try to delay the proposed regulation from actually becoming law, or at least lessen the severity of the impact. The National Immigration Law Center and the Center for Law and Social Policy, or CLASP,  have led a campaign to encourage the public to publish as many comments as possible on the proposal. More than 80,000 individuals and organizations have commented so far. The government is legally required to review public comments on the proposed regulation for 60 days, or through Dec. 10. More than 1,500 organizations, including the Washington State Association of Head Start and Eceap and the Washington Low Income Housing Alliance, have also signed a letter opposing the regulation.

Washington Gov. Jay Inslee has also written a letter detailing his concerns about the rule, and Seattle Mayor Jenny Durkan has joined a bipartisan coalition of the U.S. Conference of Mayors calling on the federal government to abandon the proposal.

Michael Erikson of Neighborcare Health, a community health center for low-income people in Seattle that receives federal grants, says the proposal pits the Department of Homeland Security against the Department of Health and Human Services. Erikson says the proposed rule is in direct conflict with a federal mandate to provide services without regard to immigration status.

“This is sweeping and there has been no corresponding communications as to why this change at this time,” Erikson said. “It’s not only the immigrating population who is going to be hurt by this. I think the risk to public health cannot be underestimated.”

“It’s just not well thought through,” Erikson added. “There is nothing about this that makes sense.”

Last week his organization submitted a lengthy letter opposing the proposal, noting that it “could lead to individuals not seeking care early, resulting in worse health outcomes for those individuals and more costly care in emergency rooms for issues that could have been prevented through preventive care. Delay in care could also lead to an increase of prevalence of communicable diseases.”

It adds: “The effect on our operations and financial security as a federally qualified health center could be greatly impacted.”

Amit Narang of Public Citizen, a nonprofit consumer advocacy organization based in Washington, D.C., says the proposed regulation “super lowballs the economic impact not only to immigrant families but also businesses.”

According to a Department of Homeland Security press release, although the regulation aims to “protect American taxpayers,” its own cost-benefit analysis of the proposed rule estimates that it would cost $386 million to $1.1 billion over 10 years, while producing few quantifiable benefits.

In response to questions, Department of Homeland Security Secretary Kirstjen Nielsen said the "proposed rule will implement a law passed by Congress intended to promote immigrant self-sufficiency and protect finite resources by ensuring that they are not likely to become burdens on American taxpayers.”

There is some evidence that campaigns aimed at producing an overwhelming number of comments on a proposal have paid off, said Schwarz, the attorney from the National Immigration Law Center.

For example, back in April the Interior Department backed off from substantially raising the entrance fee for national parks after more than 100,000 Americans wrote to complain.

And in March the so-called “tip stealing” rule, which would have allowed employers to control workers’ tips, was scrapped after workers mobilized, launching protests nationwide and submitting over 200,000 public comments on the rule.

Elizabeth Lower-Basch of CLASP says public comments have also been important in litigation and in congressional hearings.

The Congressional Review Act, established in 1996, allows Congress to vote to nullify a regulation. But policy experts say the CRA is unlikely to be used with regard to the public charge rule, even now that Democrats have control of the House. Such a move would require the president’s signature, and Donald Trump is likely unwilling to provide his.