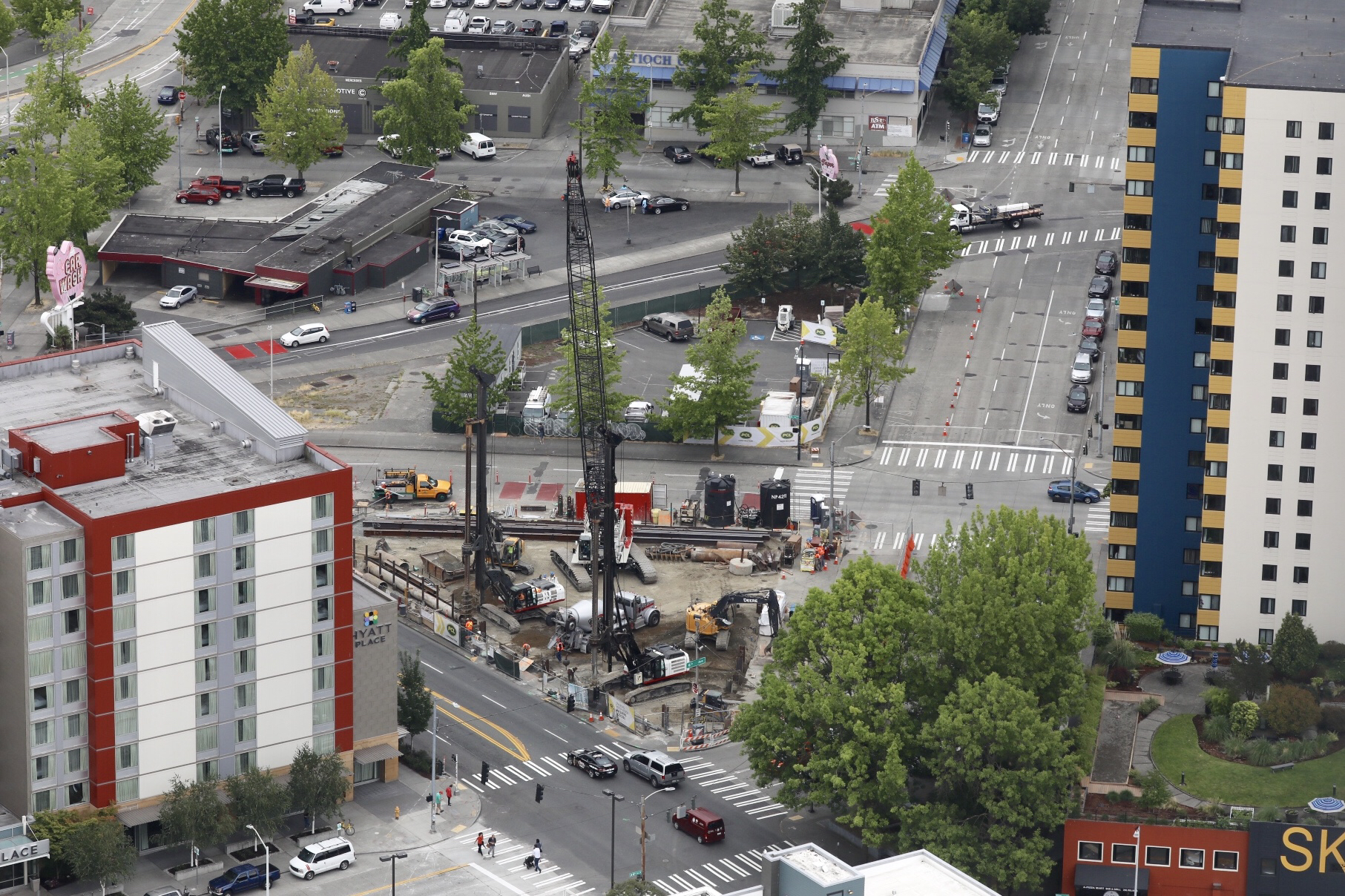 A condo project goes up in Belltown, where developers either have to build affordable homes onsite or pay a fee into the city housing fund. The citywide version of that program has been on hold for a year. (Photo by Matt M. McKnight/Crosscut)

For the past year, the City of Seattle has been involved in a legal fight over a citywide policy that would require developers to pitch in on the effort to create affordable housing. But while the litigation has kept the citywide Mandatory Housing Affordability program at bay, building has continued. Now a study by the Office of Planning and Community Development claims to show the impact of that battle: the loss of between 653 and 717 units of low-income affordable housing.

The report comes in the midst of Seattle’s continuing housing crisis. Supporters on the City Council and in the affordable housing world hope this study helps demonstrate the benefits of MHA as a city hearing examiner prepares to rule on the program's fate.

Seattle has succeeded in generating some affordable housing through the MHA program, but for now it is limited to a handful of neighborhoods — South Lake Union, Downtown, University District, Chinatown International District and Uptown. In these locations, residential and commercial developers are currently required to either pay a fee into the city housing fund or build affordable housing onsite in exchange for upzones that allow them to build larger, and therefore more profitable, buildings. So far this year, MHA has raised $13.28 million for affordable housing. But officials had planned on having implemented a “citywide” version by now, adding density to and expanding the boundaries of urban villages throughout the city.

The delay of this citywide effort began in November 2017 when the city released its final report on MHA’s environmental impact, the last step required before the City Council could have enacted the program. In response, a coalition of 24 neighborhood groups filed an appeal filled with a litany of complaints about the increased traffic, parking problems, loss of tree canopy and other problems they fear will come with greater density in their mostly single-family neighborhoods — issues they claim the impact report insufficiently addresses.

As the City waits on a hearing examiner’s final ruling, construction has continued — though developers have been unable to take advantage of the program’s upzones, which can’t be implemented yet. Had the program been in place throughout the past year, the new construction in Ballard, Wallingford, West Seattle and most other urban villages would have resulted in payments into the affordable housing fund or onsite construction of affordable units.

Curious to know the cost of delay, Councilmember Rob Johnson directed the Office of Planning and Community Development (OPCD) to estimate how many units of affordable housing the MHA program would have funded or built by projects permitted or constructed between Oct 1, 2017 and Oct 25, 2018.

“Anyone that works on land use in the city expects there to be some legal challenge,” said Johnson. “What’s unfortunate to me is that the delay has been a full year. It has cost us tens of millions of dollars for affordable housing in a time we really needed affordable housing.”

The study comes with several caveats about the limitations of estimating MHA payments or onsite performance, since those figures are calculated based on a construction project’s final design. The planning office arrived at their estimates by reviewing projects permitted between Oct 2017 and Oct 2018 and using those projects’ parameters to do the MHA math.

Both Johnson and OPCD said the estimate loss of between 653 and 717 units is likely conservative. For one, the MHA upzones will increase the size of building a developer can build, which will result in greater MHA payments or performance requirements. But OPCD made their estimates based on current zoning for smaller buildings. The report also uses conservative figures to calculate how many units the Office of Housing could pay for and doesn’t factor in multi-family development that could be built in the small slice of single-family areas that will be upzoned if the broader MHA policy passes.

The city’s Housing Affordability and Livability Agenda, a collection of policies that includes MHA, calls for building 20,000 rent-restricted affordable housing units by 2025. There is a sense among advocates that the clock is ticking not only because people are currently being priced out of Seattle, but also because the development cycle can’t last forever.

“The longer we delay, the more we miss our opportunity to put a dent in this crisis,” said Marty Kooistra, executive director of the Housing Development Consortium. “The level of need is huge. The bottom line is, we know we need to produce a whole lot more affordable housing and need to have everyone with their hand on the shovel focused on it.”

Kooistra pointed to the fact that there are more shovel-ready affordable housing projects than there is funding available from the city to build them. This year, the Office of Housing received $245 million worth of project applications, but had only $70 million in funding to disburse. According to OPCD’s calculations, that funding could have more than doubled with citywide MHA in place.

Dan Bertolet, senior researcher at the urbanist and environmental think tank Sightline, is skeptical of the city’s figures. He says they do not take into account the potential negative impact the added cost of MHA could have on development. He said, “When you add costs to home building you make some percentage of projects unfeasible and you lose production and there’s really no way to get around that. People tend to underemphasize the negative impact that loss of market supply has. If you lose one building that has 200 units, that’s a lot of units to replace in the city.”

Bertolet added that MHA works better for high-rise construction Downtown and in South Lake Union — which are currently subject to the MHA program and have been upzoned — than it does for the midrise buildings that would populate many of the urban villages impacted by the citywide implementation of the program.

Despite his criticisms of MHA, Bertolet lamented the delay. “The fact that people are able to delay this so long and at such a huge cost to the city both in loss of MHA and in the staff time and all that, it’s an egregious failure of (the State Environmental Protection Act)." That act is the legal channel through which the neighborhood group blocked MHA.

The fate of the citywide MHA policy is up to the City Hearing Examiner who is expected to make a ruling by Nov 21. If the city wins, the council can move forward and vote on implementation. If the neighborhood groups win, the city would potentially need to do further study of environmental impact and possibly come up with revisions to the policy.

“We’re losing time and we’re losing our community both in terms of people who are falling into the streets and people getting pushed out of the city,” said Councilmember Teresa Mosqueda. “We need to move forward, build the housing and get the dollars from MHA. I am hopeful on Wednesday we will get good news.”