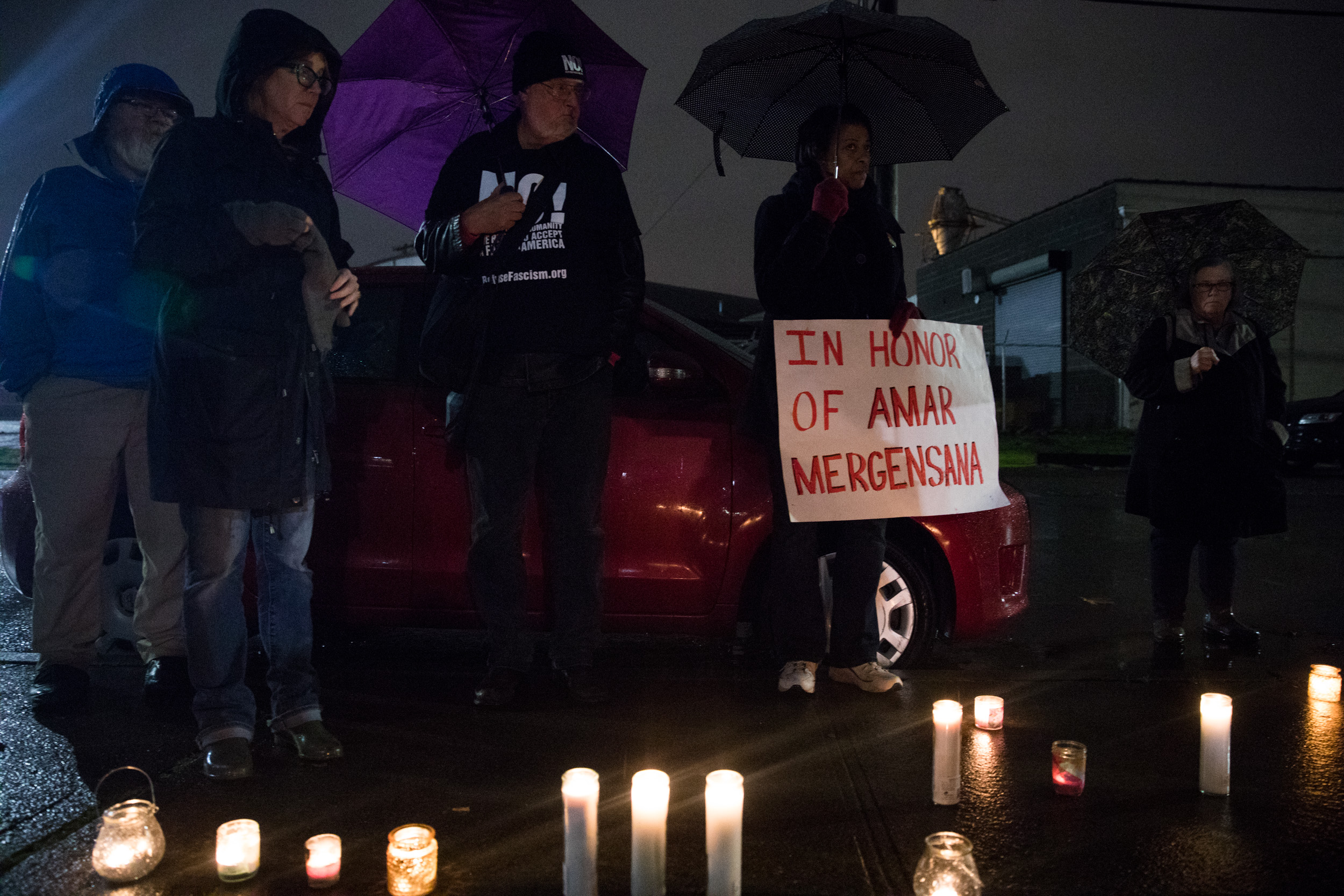 Protesters gather during a vigil in honor of Mergensana Amar at Northwest Detention Center in Tacoma, Nov. 26, 2018. Amar died while in ICE custody. (Photo by Matt M. McKnight/Crosscut)

Four high-profile members of Congress are calling for an in-depth and timely investigation into the death of Mergensana Amar, the Russian asylum seeker who was held at the Northwest Detention Center in Tacoma before his death by suicide on Saturday.

“The federal government has a solemn duty to care for and protect those within its custody, including individuals detained by ICE,” the letter begins. Sent to the acting director of U.S. Immigration and Customs Enforcement on Wednesday, the letter is signed by Rep. Adam Smith, D-Bellevue, Sen. Patty Murray (D-WA), U.S. Rep. Pramila Jayapal, D-Seattle, and Sen. Maria Cantwell (D-WA).

The letter, which gives a deadline of Tuesday, Dec. 11 to respond to questions, asks for any reports related to Amar — who had staged a two-month hunger strike in protest of his impending deportation — a timeline of where he was located within the detention center (solitary confinement versus general population or health unit, for example) and a rationale for why he was moved.

It also asks for a detailed timeline of any medical services provided and the results of any medical evaluations; whether ICE conducted mental health checks and if so, how often; whether any medical experts concluded the former detainee was a threat to himself and what, if any steps, were taken to prevent his suicide; and whether he was denied privileges or threatened with force feeding or any other retaliation for going on a hunger strike.

In addition, it asks for a copy of a forced hydration order, which Crosscut obtained while reporting a story on Amar’s hunger strike, as well as any policy recommendations to prevent similar tragedies from happening again.

“It is imperative that there be transparency and a thorough understanding of the circumstances and actions taken” leading up to his death, the letter concludes. The letter spells the former asylum seeker's name Mergensana Amar, which is how he is listed under ICE, but in an interview with Crosscut last month he said his first name was Amar.

U.S. Immigration and Customs Enforcement did not immediately respond to questions seeking comment. Tanya Roman, ICE spokesperson for the Pacific Northwest, would only say "official correspondence is answered through appropriate channels."

The letter also notes a September report by the Department of Homeland Security’s Office of Inspector General regarding a detention center in Adelanto, California. In May, investigators conducted an unannounced visit to the detention facility and found serious violations, including nooses in cells, improper and overly restrictive segregation, and untimely and inadequate medical care.

The nooses referred to in the report are made out of bedsheets, and one detainee reported seeing them used in several suicide attempts. Last year, according to the inspector general report, a 32-year-old man died at a California hospital after being found hanging from his bedsheets in his cell. Like the detention center in Tacoma, the Adelanto facility is operated by the private prison company GEO Group.

It is not clear how Amar, who died after being transported to St. Joseph Medical Center in Tacoma on Thursday, Nov. 15 and placed on life support, killed himself. Earlier this week, Pierce County Medical Examiner investigator Jeff Polanco said an autopsy on Amar's body had been completed and that the cause of death was a lack of oxygen to the brain due to hanging.

A second letter sent by the members of Congress to the Department of Homeland Security's Office of Inspector General asks officials to "conduct a comprehensive inspection and review of the conditions at the NWDC, including potential retaliation against detainee whistleblowers."

"We are alarmed by the similarities between findings by the OIG at Adelanto and reports our offices have received regarding conditions at the NWDC."

That letter notes the death of Roxsana Hernandez Rodriguez, a 33-year-old transgender asylum seeker from Honduras detained at a private detention center in New Mexico. Her autopsy showed signs of physical abuse, which raised questions about her treatment while in ICE custody.

On Wednesday, Washington Gov. Jay Inslee also sent a letter that called for an "immediate, independent inspection of the health and safety conditions" of the detention facility.

Amar, 40, hailed from Buryatia, a Russian republic in Siberia, just north of Mongolia. He arrived in the United States to seek asylum last December and turned himself in at San Ysidro, a border crossing that sits between Tijuana and San Diego, only to land in the Tacoma detention center a few weeks later. He feared he would lose his life if forced to return home.

Amar is only the second detainee to die at the Northwest Detention Center. In 2006, Jesus Cervantes-Corona, 42, died at the facility of coronary artery disease.

According to U.S. Immigration and Customs Enforcement, Amar is the second detainee to die in fiscal year 2019.