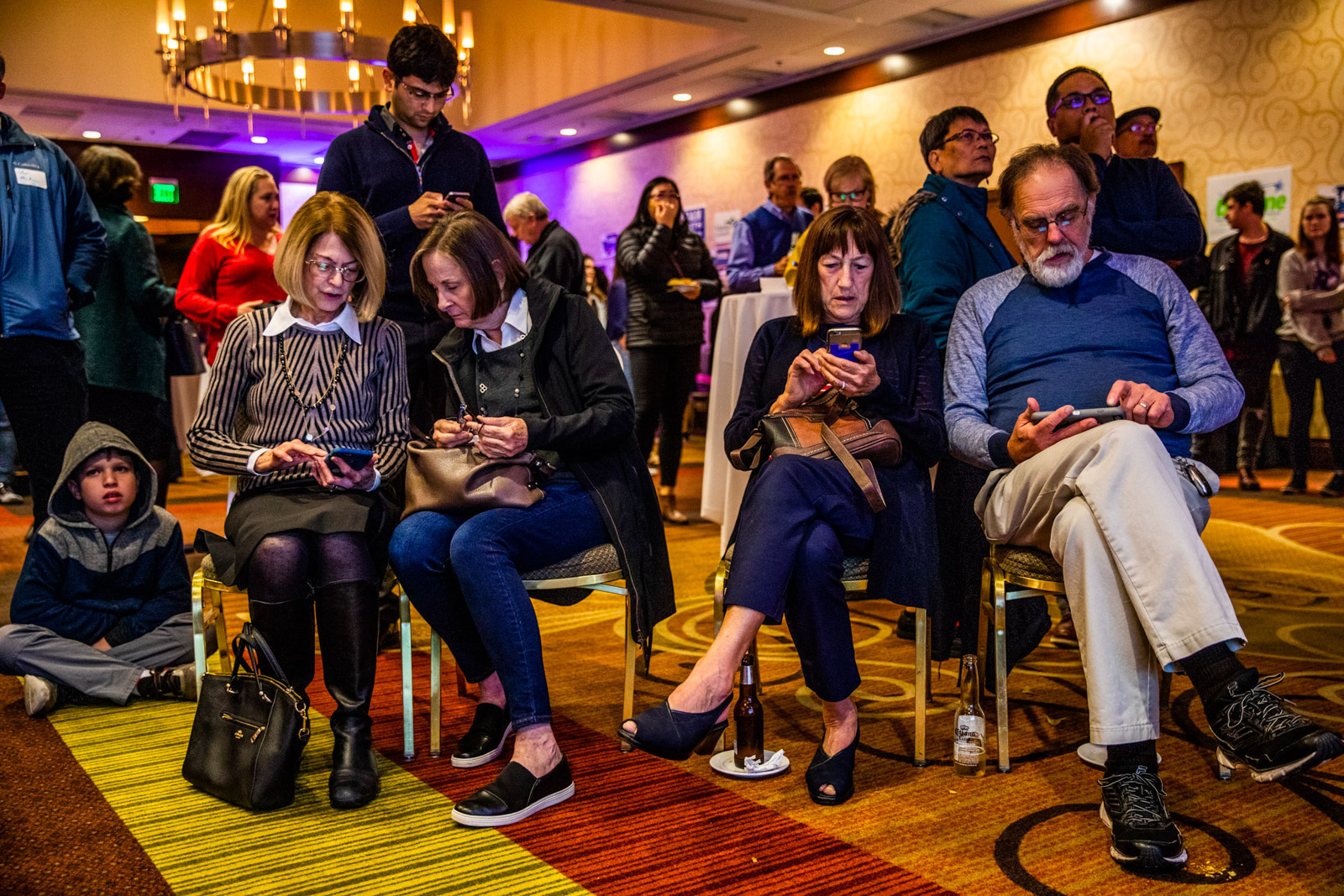 People check their phones as results are projected during the Democratic results reception at the Hilton Bellevue in Bellevue on Tuesday, Nov. 6, 2018. (Photo by Dorothy Edwards/Crosscut)

For Democrats in a largely blue state, the 2018 midterms were a chance to correct the national course that had gone so awry in November of 2016. Washington state found itself, in 2016, part of the blue “resistance” to the surprise election of Donald Trump. Computer models had promised a likely Hillary Clinton victory, but it was not to be. Swing voters in the Rust Belt, with an assist from the Russians perhaps, made sure of that. The whole West Coast found itself alienated, frustrated and fearful.

Yet, on Tuesday night, stomachs clenched as estimates of the Democrats’ chances of taking control of the U.S. House of Representatives plunged from 95 percent to nearly 50 percent, and as closely watched national contests — Beto in Texas, Gillum and Nelson in Florida — were lost in close races. Then the Republicans gained strength in the Senate.

In Seattle’s early evening dark of 6 p.m., things looked bleak. Was a replay of 2016 possible? Did Donald Trump’s rants about caravans and deployment of the U.S. Army to the border with Mexico actually work? Had the country not seen that, after two years of division, it must be healed?

As more polls closed across the country, Democratic hopes were revived. The House odds improved, then were confirmed. As of this writing, the Democrats were likely to win more than 30 new House seats, and congressional Democrats were already promising to demand the president’s tax returns for scrutiny. House victories popped up in unexpected places: Texas, Virginia, Oklahoma. The governor of Kansas is now a Democrat! It wasn’t a giant blue wave or tsunami, but it was a blue wavelet, small but significant.

Democrats can now check the president, increasing the party’s power heading into the 2020 election.

Urban areas are the strength of the party. Rural areas seem as red and Republican than ever, perhaps moreso. “All states think they are America in microcosm,” observes pollster Stuart Elway, “but Washington really is.” The inroads Democrats made nationally in suburban districts, which turned from red to blue, was mirrored here too. Western Washington swing districts turned in numerous close races where Democrats appear to be winning Republican seats. Still, the urban-rural divide appeared to be wider than ever, locally and nationally. That presents a leadership and governing challenge.

But there was also some hope in the results. Political consultant Ben Anderstone was impressed with some of the Democratic pickups or near misses nationally. And the Democrats seemed to be competing everywhere — finally undertaking a 50-state strategy instead of confining themselves to their bubbles and enclaves.

The big returns Senate candidate Beto O’Rourke saw in Texas suggest there’s a way out of division, like showing up and having a vision. “I’ve never been more optimistic about our democracy’s health,” says Anderstone, a regular contributor to Crosscut. Yes, divided, but we’re talking to each other, and people are listening to each other.

While Washington’s night looked good for Democrats, it held some interesting results on ballot measures that can be described as “We hate consumer taxes and we want gun control.” The carbon tax went down and the initiative to prevent cities from passing food and beverage taxes passed. That means a lot of independents and some Democrats voted them down, along with Republicans. On the other hand, a gun safety measure and a ballot referendum to hold the police more accountable in killings passed. Anti-tax and anti-gun? An example of our voter’s independent streak.

We could also feel smug about how we vote. Stuart Elway said that as he watched the election on TV and people waiting in four-hour lines, “I looked at that and thought, that’s just insane.” Washington’s mail-in voting generated a strong turnout and seems a heck of a lot safer and more reliable than Georgia’s ballots or Detroit’s voting machines. Why should anyone wait four hours to vote? I mean, good for them, but it shouldn’t have to be that way.

The biggest downside to our state’s system is that we might not know the final results of many races until the end of the week — or longer — because of the way our votes trickle in. No problem, however, because they’ll all be counted.

The path forward has challenges. Republicans in Olympia and the national capital likely expect Democrats, drunk with victory, to overreach their legislative agendas. Will Olympia push for new taxes? An income tax? Will Congress push for impeachment?

A divided country can steer toward wise rule by bridging divides rather than exacerbating them, but that can be difficult. And does anyone expect Donald Trump to change his style? His substance? Can Nancy Pelosi overcome her unpopularity and make deals? Looking to 2020, Democrats will have to try and hold their gains, and Republicans will have to deal with Trump’s limitations and divisiveness. In this state, where even Republicans aren’t all Trump enthusiasts, he’ll likely still be a millstone around his party’s electoral neck.

But Democrats will still have to sell themselves to the people: Trumpism might not win the suburbs, but it was not universally repudiated on election night. Indeed, it has further entrenched itself as the Republican Party as old-school moderates have died off (except it New England — what is it with all those GOP governors of Democratic states?). Still, the liberal belief that Trumpism exposed will die from sunlight alone was revealed as a hopeful fantasy. Trumpism is no fluke anymore. It’s GOP dogma.

It’s going to take more than one midterm to turn that around.