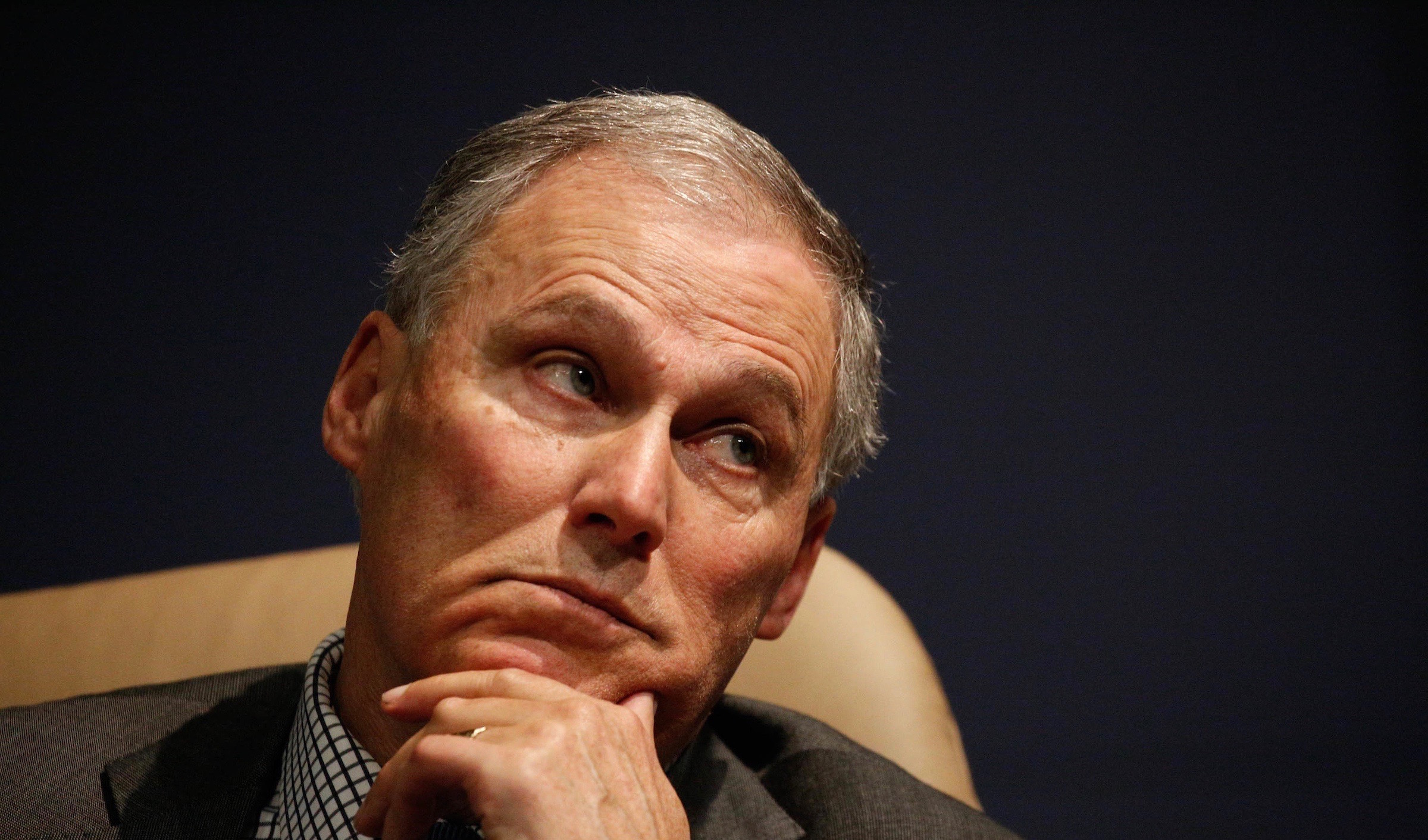 Gov. Jay Inslee during the Crosscut Festival 2018 in Seattle. (Photo by David Ryder for Crosscut)

The election is not quite over — ballots and lawsuits are still pending in some areas — but post-mortem season has begun. Here are some of my takeaways:

1. Not a Blue Wave but a Blue Seiche

The midterm trend toward blue is increasingly evident as the votes have been counted across the country—  much more than simply flipping congressional seats, the share of the Democratic votes in areas even where the GOP won showed a decided surge. A seiche is a standing wave effect on an enclosed body of water like a lake that can be caused by an earthquake or atmospheric pressure. It can create a deceptively strong and powerful storm-like surge (this has happened many places, but in Chicago on Lake Michigan is a good example). The accumulation of election effects — taking back the House, flipping seven governorships to blue, strong performance in difficult states (Texas, Florida, Arizona) and voter movement leftward in some 300 districts nationwide while only about 100 moved to the right — are indicators of the Democratic long wave.

2. The Alice in Wonderland election

Bill Bryant, the moderate Seattle Republican who used to sit on the Seattle Port Commission and ran for governor in 2016, had an interesting post-election analysis at a breakfast hosted by APCO, a major corporate communications and consulting firm. Over bacon and eggs, Bryant told that audience that he recently found a huge amanita mushroom in his backyard — these can be hallucinogenic or poisonous. The next day, many bites had been taken out of it. His yard, he said, is now either hosting some very happy squirrels, or some very dead ones. Given the midterm election, perhaps both. Mushroom munching put Bryant in mind of Alice’s experience in Wonderland where she was asked to hold impossible, contradictory truths in her mind. The midterms, Bryant said, both strengthen Democrats — control of the House, more women and diverse candidates elected, inroads in the South — and it had simultaneously strengthened President Donald Trump by increasing the GOP majority in the Senate and making many red states redder. The Democrats both won and lost, Trump both won and lost. As the Queen of Hearts might have said, if you can’t believe in impossible things, you’re not trying hard enough. “We’ve landed in the bottom of a rabbit hole we’ve been dropped into,” Bryant said.

3. Or maybe we are in the Upside Down?

At the APCO event, Bryant’s co-pundit was Jess O’Connell, former with Emily’s List who also worked for Hillary Clinton and was until recently CEO of the Democratic National Committee. She helped implement the Democrats’ “Every Zip Code Counts” strategy that clearly paid off in 2018. O’Connell talked about the contradictions of Trump so evident at his post-election press conference: He likes Nancy Pelosi and wants to go to war with her. It’s a “facts don’t matter” administration where loyalties are more tribal and not fact-based. That put me in mind of a recent column by The New York Times’ Tim Egan who cited a Trump supporter in Wyoming who said, “I can’t really say that anything he says is true, but I trust him.” Another example: The election results were largely steamrollered by the firing of Attorney General Jeff Session followed by demonstrations to protect the Robert Mueller investigation protesting the firing of a man, Jefferson Beauregard Sessions, who embodies the Trump nationalistic, racist-tinged movement. What do you chant? “Ho ho, ho hey, the old Confederate’s got to stay!”

From Blue Wave to impeachment, press banishments, then blowing town for France to celebrate an armistice signed by Woodrow Wilson, the ultimate internationalist, and questioning the validity of elections, Trump managed to spread scads of uncertainty immediately following the election. One point of the breakfast meeting was to assess the impact of the election on business. The unpredictability Trump inserts for business, not to mention the chaos of trade policies, is a huge challenge, the panelists agreed. Major industries and businesses are just one angry presidential tweet away from seeing their stock prices plunge. The Upside Down is that scary dimension from the TV horror series Stranger Things. It’s much less fun than Alice’s Wonderland. If hers was a strange dream, the Upside Down is something more malevolent. Big business must look to state and local governments for steady thinking and some signs of sanity on trade, immigration, climate policy, infrastructure and more.

There’s a good deal of slow drama in state legislative races, such as the 42nd District in Whatcom County, where GOP and Democratic candidates in a traditionally Republican district have been running neck-and-neck. But the Blue Seiche was at work in Greater Seattle where incumbent and comparatively moderate Republicans were defeated, including Mark Miloscia in the 30th (Federal Way), Chaz Magendanz in the 5th (Issaquah) and Joe Fain  in the 47th (Auburn). The result appears to be a near Republican wipeout in King County with only two districts that represent very rural slices—the 31st (southeast, Enumclaw area) and the 39th (which takes in a northeast slice around Skykomish)—represented by GOP legislators. The suburban King Co. GOP, still dominant into the early 2000s and at one time a source of influential GOP leaders (eg. Rob McKenna, Andy Hill, Dan McDonald, Alan Bluechel), has all but disappeared on the Eastside of Lake Washington along with a good measure of the party’s moderates. Urbanization and Demographic changes have taken a toll. Dino Rossi lost his Congressional race on home turf in a district that was designed by Slade Gorton to lean GOP. The metropolitan suburban Seattle influence now impacts across the mountains.

In Washington, the value of mail-in voting was never more clear as other across the country wrestled with closed polling stations, understaffing, machines that didn’t work, long lines, etc. etc. This is just insane. People, go to all-mail! You will reduce the national stress level and get better turnout and less-buggy election days. We are used to slower vote counts: Election night gives us the broad results, but the election essentially continues in close races for weeks after. There’s less TV drama and sometimes patience is required, but democracy is worth it. There are other things we take for granted that voters elsewhere don’t have. I recently spent the day with Wayne State University Fellows from Detroit who are working on revitalizing that city. One of them was astonished that King County had its own county voter’s pamphlet and was further shocked that our ballots were post-paid. He contended that faulty voting machines in Detroit had been responsible for Trump’s victory in Michigan in 2016. He planned to take these things back home to show how things could be done. 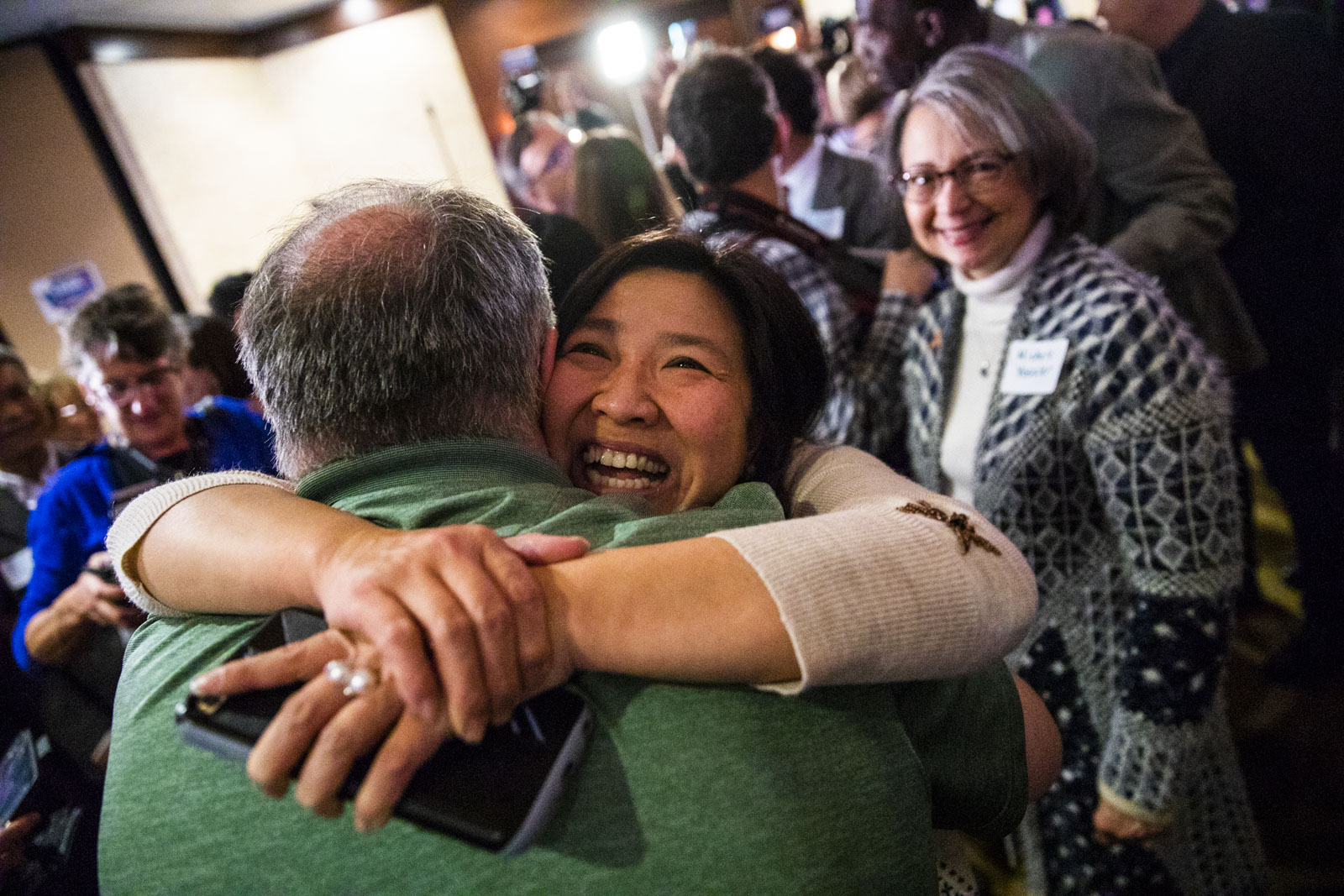 My-Linh Thai celebrates winning the democratic seat for the House of Representatives in district 41 during the democratic results reception at the Hilton Bellevue in Bellevue, Wash. on Tuesday, Nov. 6, 2018. (Photo by Dorothy Edwards/Crosscut)

My-Linh Thai celebrates winning the democratic seat for the House of Representatives in district 41 during the democratic results reception at the Hilton Bellevue in Bellevue, Wash. on Tuesday, Nov. 6, 2018. (Photo by Dorothy Edwards/Crosscut)

The path to 2020 promises to be interesting. Can Democrats consolidate their gains and beat Trump, provided he’s not impeached? Will they overplay their hand? Will Trump storm to a second term? Will Howard Shultz run and self-fund a campaign aimed at independents — or will people remember how Seattle lost the SuperSonics basketball team and left bitter fans behind? Presidential candidates from Washington are few and far between. Ole Hanson, mayor of Seattle during the General Strike of 1919, wanted to become president, but the GOP went with Warren G. Harding instead. Henry M. “Scoop” Jackson had trouble getting traction in 1976 — Washingtonians loved him but he was a bore on the stump.

Inslee is spending a lot of time helping Democrats, and local and national party success in the midterms can help him. Except, the defeat of the carbon fee initiative hurts him and might make getting something done in the Legislature more difficult. Still, if he can lead in Olympia, he could burnish his record with a coming legislative session that produces something of national import he can point to. Local pundits like to sneer at Inslee, but he has long been a climate change warrior, and renewable energy offers great promise for rural areas. If you talk to insiders here, they tend to think he won’t run for re-election in 2020 (third terms are not a gimme and he’d likely get a primary challenge from another Democrat). Yet many are skeptical that he’s presidential material. So, is he vying for a VP slot, or a cabinet seat in the next Democratic administration — EPA or Interior, perhaps? And if Inslee’s out of the next governor’s race, the open seat could create an interesting scramble among Democrats and Republicans to fill it. So watch this space.

The new legislative session starting in mid-January will be interesting in terms of budget and what firmer Democratic control on both houses means. Republicans both worry about and perhaps wish for over-reach — stuff that can justify an anti-Seattle, anti-Olympia worldview. They risk, however, being marginalized into irrelevance. In Seattle, we’re likely to see a vast overturn of the city council, with all seven district seats up for re-election for the first time and incumbents bailing (the first is Rob Johnson, but there will be others who follow soon). So, things will be boiling within the blue Seattle bubble. Will the lefty council go further to the left? Will conservatives who supported the district system finally get city council candidates members through backlash on handling the homeless, the Amazon tax debacle, zoning and density plans, and public safety?

Nationally and locally, the next two years should be intense down here in the rabbit hole.