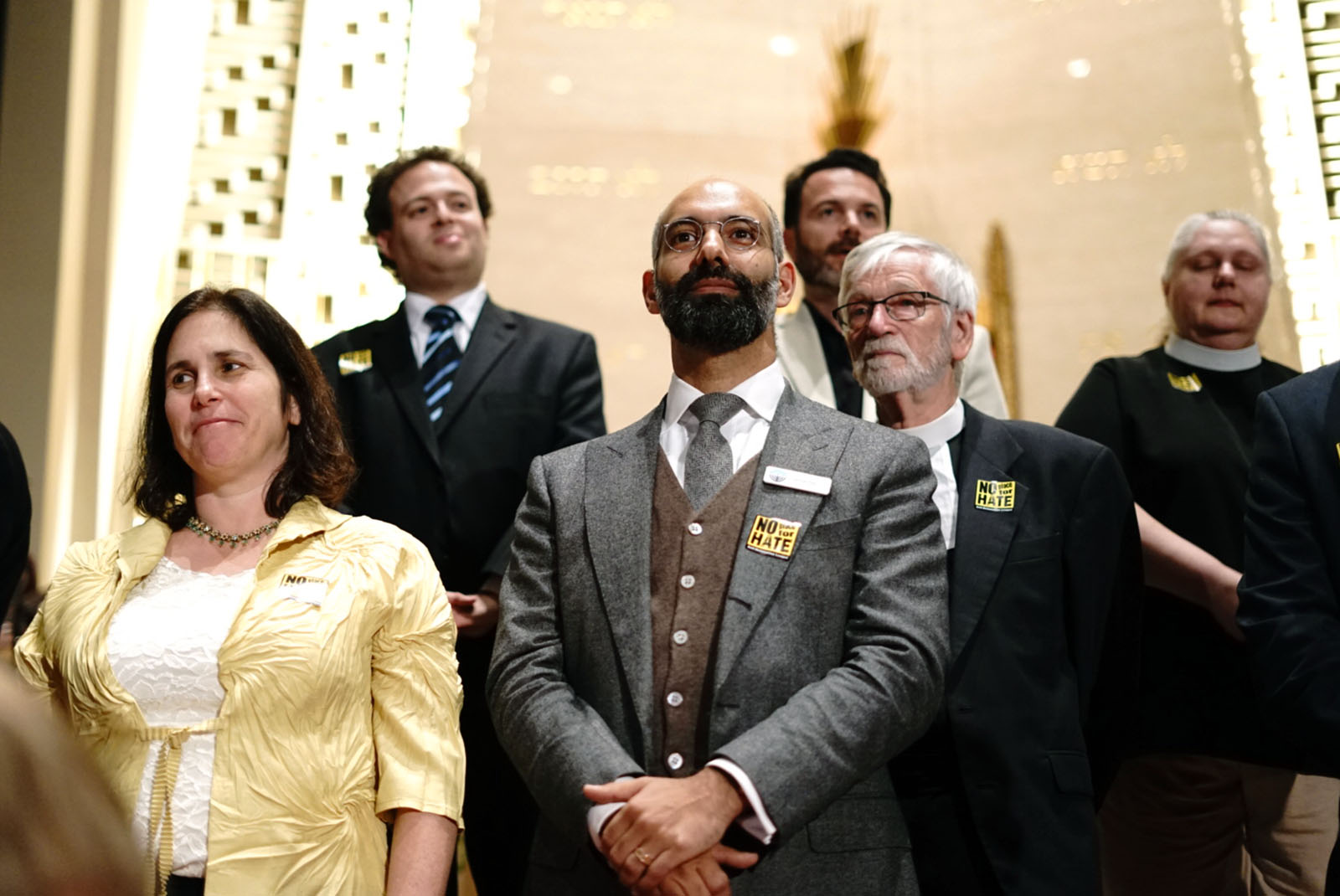 Clergy members from many religions stand as a group at the front of Seattle’s Temple De Hirsch Sinai during a vigil for the victims of the Pittsburgh synagogue shooting, Oct. 29, 2018.(Photo © Chloe Collyer)

Hate crimes in Seattle nearly doubled from 2016 to 2017, marking the third consecutive year there has been a sharp increase in such incidents, according to newly released FBI data.

Hate crimes are those motivated by the race, religion, sexual orientation, disability or gender identity of the victim.

In 2017, the vast majority of hate crimes in Seattle — 120 — were based on race and ethnicity, including 52 incidents against Blacks. Forty-five were based on religion, while 57 were based on sexual orientation. In Washington state, overall, there were 513 hate crimes committed last year, up from 389 in 2016.

The new FBI data comes less than a month after one of the deadliest anti-Semitic attacks in U.S. history — a shooting at a Pittsburgh synagogue that killed 11 and wounded six.

In Seattle alone, the data reflect a nearly four-fold increase in hate crimes motivated by anti-religious bias, including 29 anti-Jewish incidents. There were 12 incidents based on religion reported in 2016.

“We’ve heard from a number of our community members who have been targeted by hate crimes, especially those in the South King County Muslim and Somali community," said Roxana Norouzi, deputy director of OneAmerica, an immigrant and refugee advocacy organization based in Washington.

"One woman had an egg thrown at her head, and a local Kent mosque has been the target of racists who attend each week and spew epithets at worshippers. No one should be attacked based on who they are, and everyone should be free to practice their religion without facing hate," Norouzi said.

“I think the numbers are deeply disturbing and are reflective of an increase in anti-Semitic crimes and incidents” we’ve been seeing at both a local and national level, said Miri Cypers, regional director for the Anti-Defamation League Pacific Northwest. “We’re seeing the most serious types of incidents perhaps that we’ve ever seen.”

Cypers said she and others at the organization have seen a spike in incidents at both private and public schools, such as vandalism that includes the use of swastikas, Hitler jokes and the targeting of Jewish students and teachers.

Nationally, law enforcement agencies reported 7,175 hate crimes in 2017, up from 6,121 in 2016. Of the more than 7,000 incidents reported last year, more than half — 58.1 percent — targeted a person because of their race or ethnicity. Nearly half of the victims — 48.8 percent — were targeted because they’re Black. About 11 percent were victims of anti-Hispanic or Latino bias.

About 22 percent were victimized due to their religion and approximately 16 percent were targeted because of their sexual orientation.

Approximately 58 percent of the crimes motivated by religious animosity were directed at members of the Jewish faith, while nearly 19 percent showed anti-Islamic or Muslim bias. The data show that while anti-Semitic hate crimes rose 37 percent last year, anti-Muslim hate crimes declined by 11 percent.

The FBI collected the data from 16,149 law enforcement agencies (up from 15,254 last year), which reported crimes against both people and property.

There were 3,115 hate crime offenses classified as crimes against property, with the majority of these — 74.6 percent — constituting acts of destruction or vandalism. About 25 percent included robbery, burglary, arson and other offenses.

According to the FBI, of the 6,370 known offenders, 50.7 percent were White, and 21.3 percent were Black or African-American.

The FBI’s numbers on Seattle appear in line with numbers released by the Seattle Police Department earlier this year. The department said a total of 240 criminal and non-criminal bias-based incidents had been reported in the second half of 2017, such as anti-LGBTQ and anti-Black malicious harassment.

The 240 incidents reported in 2017 represent an 88 percent increase of bias-based incidents city-wide when compared to the same time period in 2016.

OneAmerica's Norouzi said the data needs to be regarded in light of a divisive political climate.

There is "a rising tide of white supremacy sparked by our own president’s reckless statements, and backed by policies that target immigrants, people of color, GLBTQ Americans and women" Norouzi said.

"While most Americans believe that we’re stronger together as a diverse and welcoming nation, we have a lot of work to do to stem this rising tide and come together as a nation."