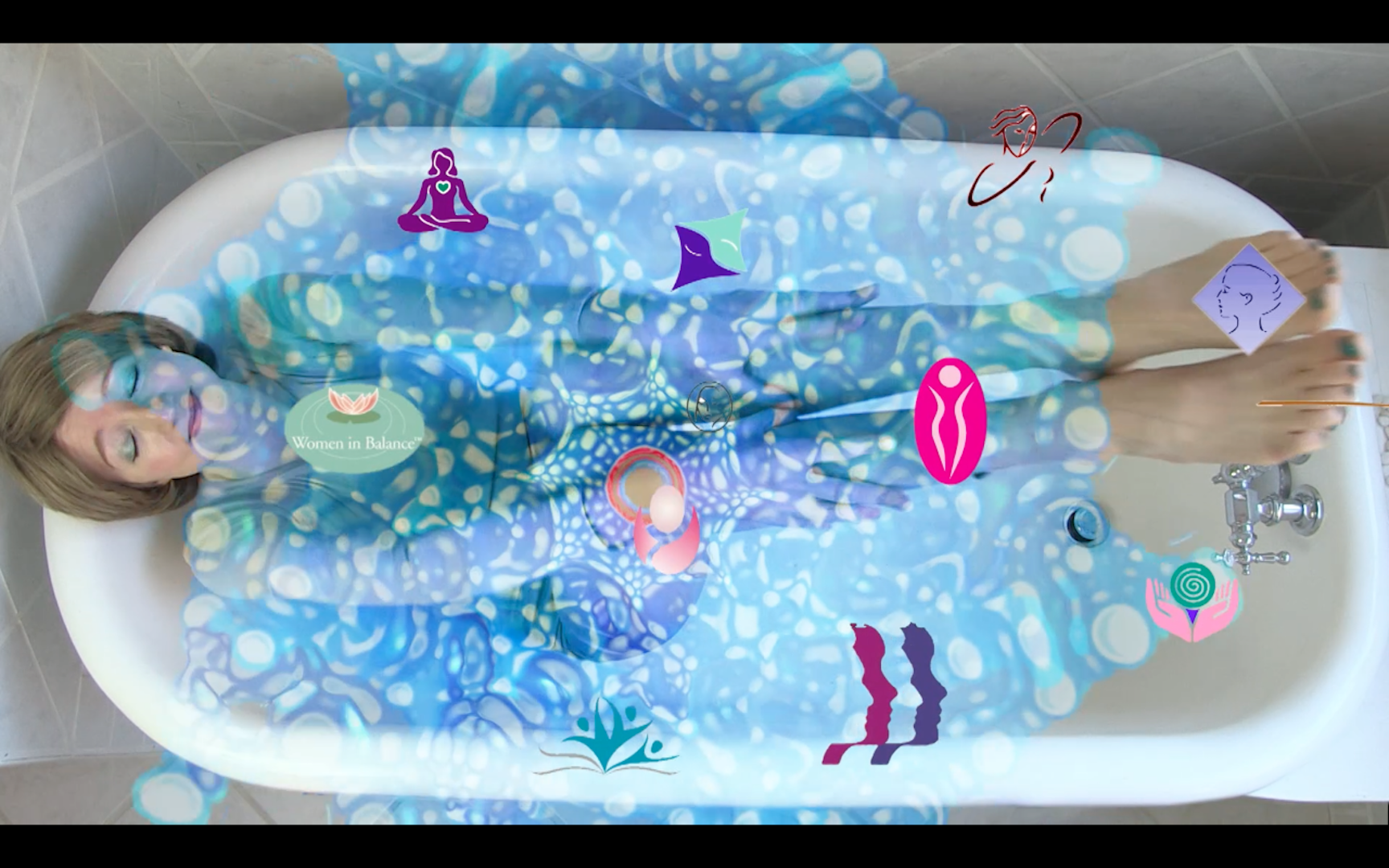 Entering the world of video-artist Shana Moulton’s alter-ego “Cynthia” is a little like falling down the rabbit hole with Lewis Carroll’s Alice — and landing in a soft, hallucinatory pile of New Age self-help bromides. It’s a delightful, double-edged experience: a swan dive into an interior, intuitive realm made richly manifest through Moulton’s expert video-installation wizardry.

In Moulton’s “Feed the Soul,” a stream of images carries upbeat verbal messages (“Think Positive,” “Love Your Life,” etc.) up a narrow staircase, as if on a conveyor belt, into the portals of Cynthia’s mind. “Whispering Pines 10 — Phase One” is the latest installment in California-based Moulton’s ongoing musical “internet soap opera” in which Cynthia engages in ordinary domestic routines — waking up, exercising, taking a bath, dusting — that take wildly surreal turns as the household objects around her come to unruly life.

Moulton’s pieces are among the highlights of Group Therapy, a fascinating new show at the Frye Art Museum that’s the brainchild of Amanda Donnan, the Frye’s new curator who joined the museum in July 2017. This is her first major Frye exhibit and at a press preview earlier this month, she said her aim was to survey “themes of psychotherapy, alternative medicine and the wellness industry” as they’re being explored in the art world — sometimes earnestly, sometimes cheekily. (The cheekiest item in the show is Maryam Jafri’s “Self-Care:” a toilet-paper dispenser in which the toilet roll is made of yoga-mat material.)

“Some people don’t seem to get [Moulton’s] work,” Donnan says. “They think it’s sort of frivolous. But what I like about it is that there is this aspect of ambivalence. It’s critical, but it’s also taking part and embracing this whole culture, and I think that’s something that characterizes the whole show.”

Group Therapy doesn’t just weigh in on whether art can heal us. It also examines the very concept of healing in a cultural moment when self-care has become part of the zeitgeist. Some pieces in the show, like Moulton’s, are immersive experiences. Others invite viewer interaction. Not every item on offer is a knockout. I could have done without Leigh Ledare’s excruciating feature film The Task, in which a two-hour corporate encounter group seems to bring out the worst in everyone. But most of the work is wonderfully playful or probing.

Now I want you to think about the latest news. How is it affecting you?”
— Liz Magic Laser’s Primal Speech

Donnan originally conceived of the group show in 2016, when she had charge of the art galleries at Seattle University. An additional catalyst was the unexpected result of the 2016 election. Donnan wondered how artists were addressing the “very fractured, tribalized political climate” that Trump’s victory exacerbated. As she put it in an interview last month, she wanted to see how artists were “responding to the sense of free-floating anxiety and despair that seemed to arise from that moment.”

Liz Magic Laser’s “Primal Speech” confronts the 2016 election directly. The video is embedded in the wall of a gray, living-room-sized padded cell equipped with pillows and stuffed animals you can throw and punch if you’re still feeling as intensely about Trump’s victory as the seven actors in the video do.

I say “actors” because Laser uses professional performers to recreate sessions originally mediated by a certified professional life coach, who appears onscreen from time to time, encouraging the participants, in a tone of catatonic calm, to vent their rage and anxiety about the election. (“Now I want you to think about the latest news,” she says. “How is it affecting you?”)

One Clinton voter, addressing Trump aloud, seethes with contempt: “She knows how to be a leader. She knows how to manage the office. All you know how to do is fire people and go bankrupt.” Meanwhile, a pro-Trump guy, reeling from his break-up with his Russian-immigrant girlfriend — who, he feels, “played him” — just can’t understand why people won’t give his chosen presidential candidate a chance to prove himself. The unruffled life coach urges them on through the bedlam of their feelings.

Donnan’s more general aim with Group Therapy was to examine the stress Americans are under as pressures to achieve and succeed are undermined by “hidden, systemic obstacles” that a lot of citizens face. Many individuals, she notes, aren’t as plugged into traditional communities of faith or ethnicity as they once were.

While most Western countries have a strong social safety net, Americans are often left to their own devices when it come finding ways to care for themselves. Whole businesses — “everything from personality-type tests, self-improvement podcasts, meditation retreats, spa treatments, and juice cleanses to crystals, astrology, Reiki, and ayahuasca ceremonies,” Donnan writes in an essay accompanying the show — have been created to fill the gap.

“That need has been capitalized upon,” Donnan declares. “But it’s also an authentic need.”

Has Donnan herself taken advantage of any particular type of therapy?

“It’s certainly a culture that I am part of, just like anyone,” she says. “It seems very West Coast, too.”

She finds it striking that Liz Magic Laser and Shana Moulton have attracted a lot of attention in Europe, perhaps because there’s “an exoticism about West Coast New Age stuff that is very attractive to Europeans. Here,” she says with a laugh, “it’s maybe too close to home.”

Donnan also believes her East Coast origins were a factor in creating Group Therapy. She grew up in Pittsburgh, and her career has included stints as a production coordinator at Art21, the New York nonprofit that makes documentary series about contemporary artists for PBS, and six years as an assistant curator in the modern and contemporary department of Pittsburgh’s Carnegie Museum of Art. A West Coast native, she says, might be more habituated to these trends.

Mexican artist Pedro Reyes was a key figure Donnan wanted to include early on, too. “The Museum of Hypothetical Lifetimes” (from Reyes’ ongoing Sanatorium series) consists of three long shelves of miscellaneous toys, dolls and knick-knacks with which to fill a nearby architect’s model of a mazelike museum. Trained volunteers are on hand to facilitate “activations” of the piece (2-5 p.m. Tuesdays, 4-7 p.m. Thursdays and noon-3 p.m. Saturdays and Sundays). Under the volunteers’ supervision, museum visitors remove objects from the shelves and place them in the maze, where they may (or may not) take on psychological significance.

“Reyes is very interested in the historical relationship of art and psychotherapy and symbolism,” Donnan says. “The Sanatorium project is very much about the democratization of therapy and the questions around ethics and expertise that brings up.”

From the start, Donnan also wanted to incorporate the paintings of Vashon Island artist Ann Leda Shapiro, whose work had never had a museum showing before. Shapiro is an acupuncturist whose watercolors and watercolor-and-gouache paintings combine meditative qualities with gorgeous artistic accomplishment. Some are abstract or symbolist variations on the human body’s internal organs. Two pieces — “Near Death Seed Pod” and “Near Death 2 Lung” — allude to Shapiro’s own near-death experience 15 years ago, during hospital treatment for a pulmonary embolism (a blood clot in the lungs). In a recent telephone interview, Shapiro described a sensation of having her head pulled into the center of her body and then exiting her chest through a tunnel filled with lavender, pink and rose-colored striations, leading to a “mercurial landscape,” before she snapped back to consciousness.

The experience gave her an “unbelievable sense of well-being and peacefulness,” she recalled, removing any fear of death she had. The paintings strive to recreate that vision and sensation. You don’t have to buy into any notions of an afterlife to be soothed by the beauty of their complex, wavering patterns. (It’s worth noting here that, according to the BBC, doctors in Montreal recently started prescribing their patients free visits to the Montreal Museum of Fine Arts as a way to give them a “relaxing, revitalizing experience, a moment of respite.” “I am confident,” one doctor commented, “that my patients will be delighted to visit the museum to ease their suffering, without any side effects.”)

The artist whom Donnan had the most intense exchanges with as she assembled the show was Marcos Lutyens, a trained hypnotist from Britain who lives in Los Angeles. Lutyens’ “Library of Babel, a Symbiont Induction,” is a living, organic, Smell-o-Rama experience. Its centerpiece is a “mushroom staircase” enclosed in a humid glass case. The floor of the gallery is covered in mulch. There are bean bag chairs to sit on and a text to listen to on headphones that Lutyens supplies.

Maybe I just needed a nap, but the soporific voice of Lutyens worked its intended effect on me. I drifted a long way off as Lutyens’ voice led me in dreamlike cadences up and down the staircase. I woke up feeling refreshed — and was a little surprised I hadn’t fallen off the beanbag chair in the process.

“He was pushing me on this idea of therapy, and what therapy can mean,” Donnan recalls. Rather than therapy being something intended to cure or react to a specific problematic psychological ailment, Lutyens suggested, maybe it should be looked upon as “something that could open up and be positive and unlock different potentials.”

Donnan finds it easy to say what the show isn’t trying to do: “I’m not so much interested in looking at art as a sort of diagnostic tool. I’m not interested in the biographical relationship — like art as an expression of madness … outsider art, art of the insane, things like that.”

When it comes to spelling out what Group Therapy is, she suggests that it’s simply a sampling of artists who “comment on and/or adapt strategies of psychotherapy, the wellness industry and alternative medicine” as they create their work. The anxieties they address, she feels, have grown particularly intense in the age of Trump, but there’s no neat uniformity to the approaches they take.

“I think each of the artists is doing something different,” she says, “looking at, participating in, this phenomenon in different ways. I don’t think there’s a way you can say: The exhibition does X. … The show has shifted over time as I’ve thought more about it and dug deeper. The question of contemporary art’s relation to healing really ended up opening out into an investigation of the public art institution’s social role as well — and to the question of responsibility that we have to the people that we serve.”

Group Therapy continues at the Frye Art Museum through Jan. 6, 2019.