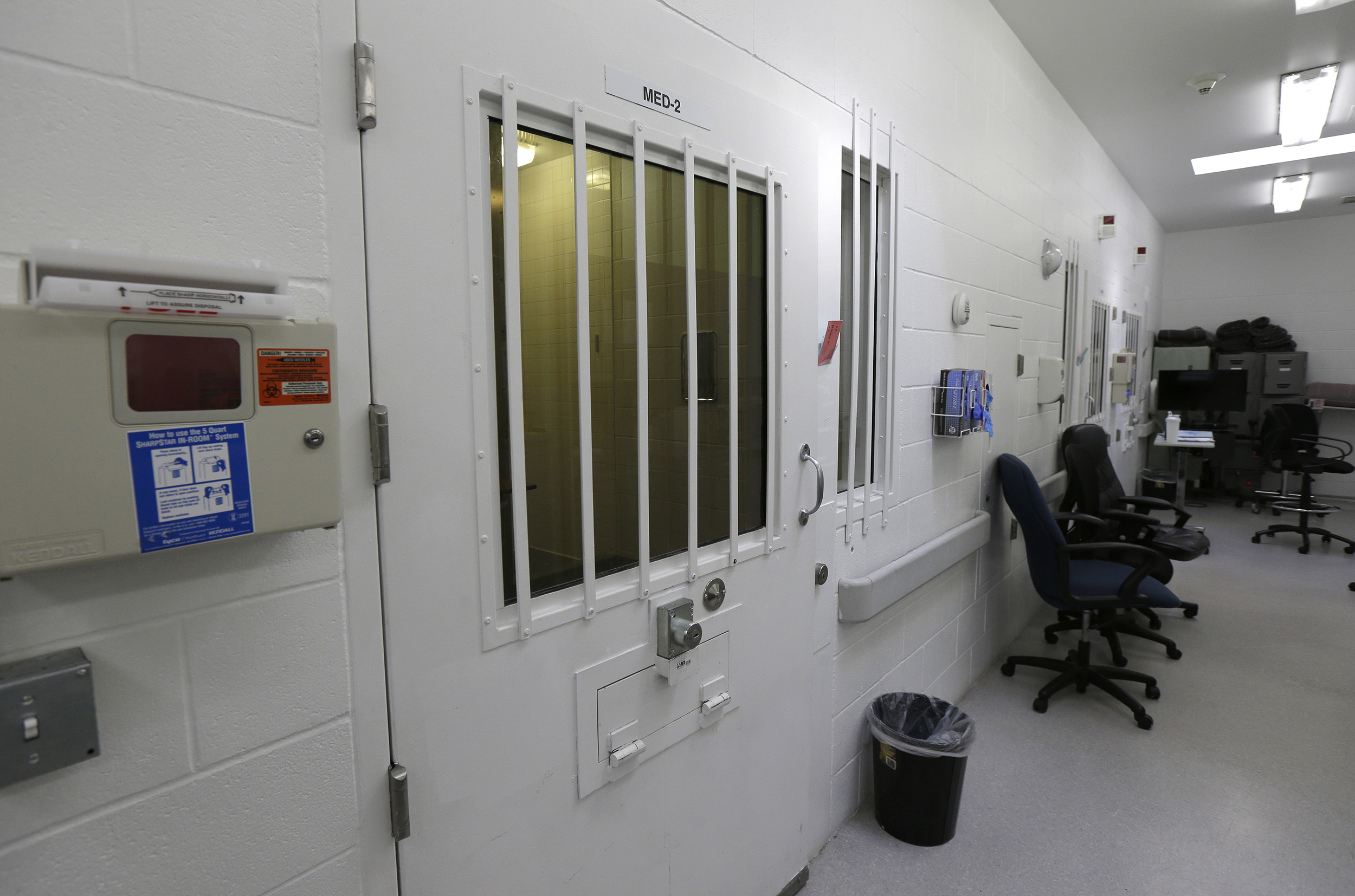 A medical treatment room is shown at the Northwest Detention Center in Tacoma, Wash., during a media tour on June 21, 2017. (AP Photo/Ted S. Warren)

Six days after being transported from a cell at the Northwest Detention Center in Tacoma to a nearby hospital, a detainee who had been on a hunger strike remains unresponsive, U.S. Immigration and Customs Enforcement confirmed on Wednesday. In a press release, ICE stated that the detainee — Mergensana Amar — is on life support.

The press release goes on to detail the events that took place on Thursday, Nov. 15. After Amar was found unresponsive, "medical staff at the detention center immediately called 911 and began efforts to resuscitate him. Amar was rushed to Saint Joseph’s Medical Center in Tacoma, admitted to the hospital’s intensive care unit," reads the press release. In its statement, ICE spells the detainee's name Mergensana Amar, but in an interview with Crosscut last month he said his first name was Amar.

According to ICE, Amar had ended his hunger strike last month and was "in good physical health prior to this incident."

"While he refused meals provided by the detention center for a number of days, he began consuming fresh fruit, electrolytes and meal replacement shakes on Sep. 19, consuming sufficient calories to be removed from hunger strike status on October 16," reads the press release.

ICE says it has "endeavored, through the assistance of the Russian Embassy, to identify and contact next of kin. Pursuant to agency policy, ICE will conduct a thorough assessment of this incident.”

In a statement given to a Latino Advocacy attorney and provided to Crosscut, one detainee said, “On November 15, 2018, at 3:30 p.m., about 20 officers from the detention center, from GEO or ICE, came to Amar’s room because he was dead. I saw his body when they took it out of the room.” The statement goes on to give details about the condition of the body and the inmate’s belief that he died three and a half to four hours earlier. There was no indication of the inmate’s ability to make medical judgments about the condition of a body after death.

Officials with GEO Group, the second-largest private prison provider in the country, which U.S. Immigration and Customs Enforcement contracts with to run the Tacoma facility, had described Amar as “unavailable” to members of NWDC Resistance.

Amar hails from Buryatia, a Russian republic in Siberia, just north of Mongolia. He arrived in the United States to seek asylum last December and turned himself in at San Ysidro, a border crossing that sits between Tijuana and San Diego, only to land in the Tacoma detention center a few weeks later. He feared he would lose his life if forced to return home.

With the help of a Russian interpreter, Crosscut spoke to him in October on what was the 47th day of his hunger strike. Asked whether he was hopeful he would be released before his physical health deteriorated, the detainee had replied, “It doesn’t matter because I’m not going to stop.”

Amar explained that back home, Russian skinheads had beaten and threatened him. As evidence of the injuries he had sustained, he pointed to his right hand, where a finger appeared to be permanently dislocated. He also said he had been imprisoned for demonstrating for the independence of Buryatia, which has been under Russian rule since the 17th century.

In September, ICE obtained an involuntary hydration and medical treatment order for Amar.

“The Court finds that there is sufficient cause to believe that without the requested medical testing and treatment” he is “in danger of irreparable injury, and possible death,” reads the court order.

The order specifies that medical staff at the detention center had permission to administer fluids intravenously and to perform certain laboratory tests that check for vital signs.

“It is hereby further ordered that if [name redacted] continues to refuse the necessary medical treatment and monitoring, ICE and medical staff … may use soft medical restraints,” reads the order signed by U.S. District Judge Benjamin H. Settle.

In a statement to Crosscut, ICE denied having to use the forced hydration order but instead said Amar was “voluntarily drinking a meal replacement shake in lieu of their daily scheduled meals.” Amar, however, told Crosscut he would not have agreed to take any liquid supplements, such as Pedialyte, an oral electrolyte solution, and Ensure, a nutritional shake, if not for guards threatening him.

Amar also told Grace Meng, a senior researcher with Human Rights Watch who visited the detainee with a Russian interpreter, that when he had refused laboratory tests, such as urinalysis, “heavily armored people, with helmets and shields, came and surrounded him, and told him if he doesn’t resume eating voluntarily, they will force-feed him through a tube.” Meng said they then pointed to the court order as if it provided them with the authority to do so, even though the court order does not allow for force-feeding. Meng said Amar had also been denied access to the law library, as well as television.

Amar is not the only detainee who has complained of retaliation. On Sept. 7, according to court documents, several hunger strikers were sentenced to 30 days in isolation. Detention officials explained they had put inmates in isolation because they were inciting others.

In September, Enoka Herat of the American Civil Liberties Union of Washington sent a warning letter to the Northwest Detention Center warden, explaining, “Detainees in ICE custody have the right to engage in protected First Amendment speech, including participation in hunger strikes.”

And last month, Human Rights Watch sent a letter to ICE to notify them of the concerns they had regarding the treatment of inmates participating in hunger strikes.

“As the Trump administration seeks to increase the number of people detained and to limit the availability of release, including for asylum seekers, the desperation of people who have been detained for long periods will likely grow,” the letter reads. “It is therefore urgent that you review treatment of hunger strikers and ensure they are treated humanely and with dignity.”

ICE has denied retaliating against inmates. GEO Group has refused to answer questions and refers all inquiries to ICE.

The Northwest Detention Center is no stranger to controversy. In 2017, for instance, Washington Attorney General Bob Ferguson sued GEO Group for violating the state’s minimum wage law, paying detainees $1 per day or, in some instances, with snacks and extra food, for labor.

Rules for gaining asylum have also become more strict under the current presidential administration. In June, Attorney General Jeff Sessions issued a ruling that makes it more difficult for victims of domestic and gang violence to gain asylum.

In addition, earlier this month, the Trump administration announced that it would move to deny asylum to all migrants who do not enter through official border crossings. The American Civil Liberties Union is already challenging the rule in court. For decades, immigration law has required that officials allow migrants who fear persecution in their home countries to seek asylum regardless of whether they entered the United States legally or illegally.

But even before Sessions announced the changes, the chances of gaining asylum were low. In 2017, according to the Transactional Records Access Clearinghouse, or TRAC, at Syracuse University, 30,179 asylum cases were decided by judges — the largest number of cases since 2005. More than half, however — 61.8 percent of applicants — were denied asylum status.

Editor's note: A version of this story published on Friday, Nov. 16, reported that the detainee had died. We are responsible for the accuracy of all of our stories. We apologize to our readers, to the detainee and to his family. A restricted court document was also previously described as under seal.