Lessons for Washington from a carbon-tax autopsy 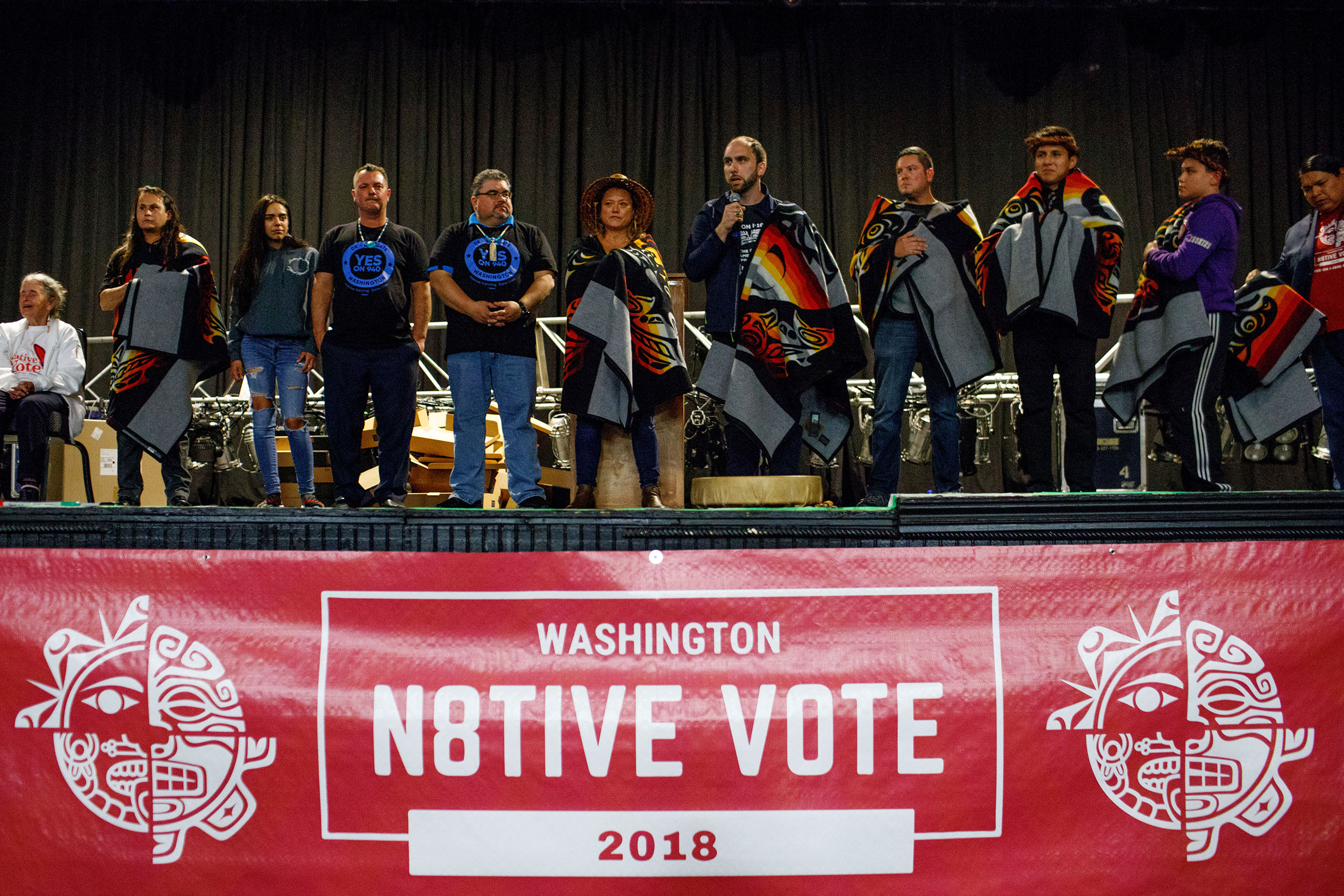 Representatives speak during the Washington N8tive Vote watch party for "yes" on I-1631 carbon fee and Yes on I-940 watch party on Nov. 6, 2018 at the Emerald Queen Casino in Tacoma, Wash. (Photos by Sarah Hoffman/Crosscut)

With increasingly common headlines about wildfires and hurricanes, discussion of climate change quickly follows. A recent Intergovernmental Panel on Climate Change (IPCC) report notes that the world has only a couple of decades to limit global warming to 1.5 degrees Celsius — beyond which temperature increases will exponentially heighten the risk of droughts, floods and extreme heat. This was followed by a report by 13 U.S. federal agencies that outlines the economic and health consequences of climate change for the United States. Never before has the need for climate action been more urgent.

While Americans might agree on the need for climate action, there is a profound disagreement over policy instruments. Though public opinion studies, such as the Yale Climate Opinion Poll or the National Survey on Energy and Environment, indicate public support for requiring fossil fuel companies to pay a carbon tax, the recent failed vote in Washington state on the carbon tax initiative, I-1631, reveals that even in a blue state carbon taxes do not excite liberal voters.

Despite multiple attempts, the state has failed to enact a carbon tax through the legislative process. Environmental groups have therefore tried to pass carbon tax via ballot measures and failed twice, in 2016 and 2018.

In 2016, the state of Washington voted on a carbon tax, Initiative 732. It secured only 41 percent of the vote. This was a “revenue neutral” tax, meaning the revenue raised by the carbon tax would be returned to citizens in the form of reductions in other taxes. This approach  could appeal to conservatives who worry that a carbon tax might become a pretext for new taxation and a larger government. I-732 sought to build a bipartisan coalition by attracting the pro-environment conservative vote. But it failed to draw in sufficient numbers of conservative voters and, at the same time, lost a sizable liberal vote, given the intense opposition from mainstream environmental and social justice groups.

In 2018, mainstream environmental, labor and social justice groups proposed a new version of the carbon tax, Initiative 1631. This was a “revenue positive” tax, one that would generate roughly a billion dollars of new revenue, which would then be used to fund new projects to mitigate climate change, such as mass transit and renewable energy, along with assistance to poor communities hurt by increased energy costs. Unlike with I-732, Gov. Jay Inslee actively campaigned for the initiative.

But even as a liberal policy measure, I-1631 did not consolidate enough of the liberal vote, securing 43 percent of the vote overall. Tellingly, it did not capture the electoral support won by U.S. Sen. Maria Cantwell, a Democrat, who received about 59 percent of the statewide vote.

About 1-in-4 Cantwell voters did not support I-1631. Remarkably this vote gap can be observed in every single county. See the graph below. Each dot represents a county. The size of the dot reflects the county’s population. If all who voted for Sen. Cantwell had also voted for I-1631, all dots representing counties would lie on the diagonal line. The fact that all of them lie above it shows a gap in electoral performance between Sen. Cantwell and I-1631. Consider King, San Juan and Jefferson  counties. Here both Cantwell and 1-1631 secured over 50 percent vote. And yet, I-1631 still underperformed by about 15 percentage points. Or take the case of counties where Cantwell secured more than 50 percent  vote but I-1631 did not: Clallam, Clark,  Island, Kitsap, Pacific, Pierce, Skagit, Snohomish, Thurston, Whatcom and Whitman. We see the same vote share gap in these counties as well.

While I-1631 did not excite all Cantwell voters, it did perform better overall in relation to the 2016’s carbon tax initiative, I-732, by about 3 percentage points. Hence, 1-1631 did lead to a small measure of liberal consolidation behind it. In the plot below, blue dots represent counties with a majority support for the Democratic Party (blue color) in the 2016 and 2018 U.S. Senate races. Fifteen counties (including King, San Juan, Jefferson, Clark, Whatcom and Thurston) saw higher support for 1-1631 than I-732.

Climate policy is not dead in the state of Washington. But as a policy instrument, the carbon tax does not enjoy the popular support required to pass on the ballot. Washingtonians have voted it down twice, as the conservative “revenue neutral” initiative and as the liberal “revenue positive” measure.

Steven M. Karceski is a Ph.D candidate at the University of Washington. Nives Dolšak and Aseem Prakash are professors at UW.