Most of WA's judges are running unopposed. Does it matter?

Of the 147 judges and justices running for election in Washington, just 29 have an opponent. 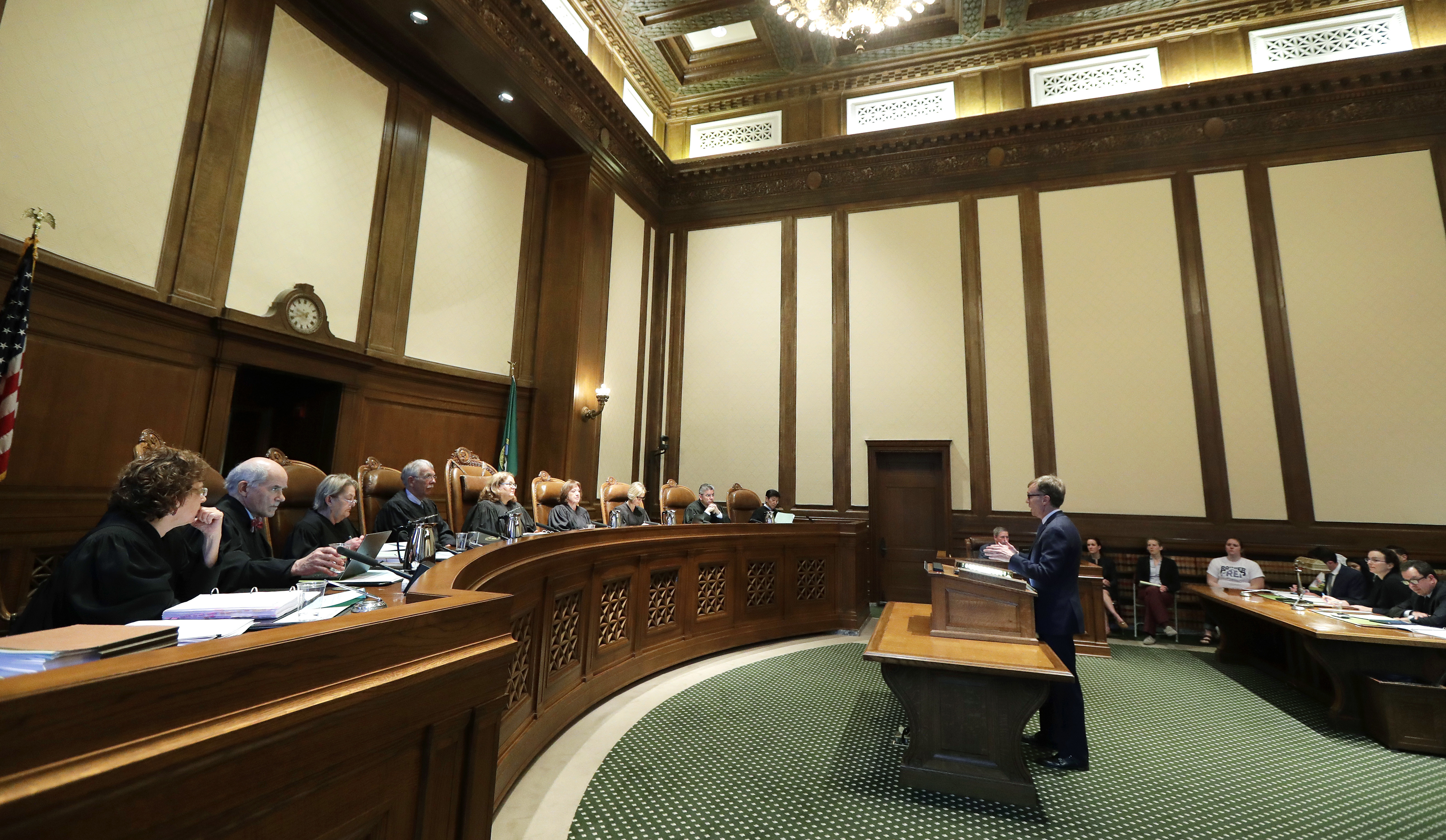 In this May 17, 2018 file photo, Rob McKenna, center, speaks in front of the Washington Supreme Court in Olympia, Wash., on May 17, 2018. The race for the seat currently held by Justice Steven C. Gonzalez is the only contested judicial race on Seattle ballots. (AP Photo/Ted S. Warren, File)

With the exception of one state Supreme Court race, the hardest choice Seattle voters had to make about this year’s judicial elections was whether it was worth the time to fill in bubbles for the 16 judges and justices running unopposed. It’s striking to see so many uncontested races clustered on the back of the ballot, but this year’s spate of judicial races isn’t an anomaly, nor is Seattle an outlier in the state or nation. Of the 147 municipal, appellate, superior and Supreme Court judges and justices running for election in Washington, just 29 have an opponent on the ballot.

Why are so few judicial races contested and what, if any, consequences are there when judges can coast through an election without the need to campaign? Crosscut spoke to partisan advocates, retired judges, a judicial campaign manager and an academic to find out.

There are a number of reasons most judges run unopposed. One major hurdle for would-be challengers comes from the inattention paid to judicial races by political operatives, news media and voters themselves, which makes it difficult for a fresh face to make the required waves to take down an incumbent. Then there is the fact that sitting judges are often seen as well-vetted, leaving would-be challengers even more reticent to expend the energy to run.

The consequence of this lack of competition for judicial seats depends on who you ask. Some experts see it as a nonissue for a system they say works the majority of the time. Others, however, worry that the lack of spotlight on judicial elections can allow mediocre judges to operate with impunity and sets Washington up for unqualified judges to win elections. The solution, they say, is not to simply convince the media to pay more attention or to better educate voters, but to eliminate judicial elections entirely.

“The public is not aware of [judicial races] in part because other institutions don’t pay attention to them,” said Andrew Villeneuve, executive director of the Northwest Progressive Institute, a left-leaning research and advocacy group in Washington. “Not political parties, not media, not major political associations. … Elections keep the status quo going. The judges who are on the bench now stay on the bench.”

There also appears to be a lack of appetite for contesting sitting judges among attorneys qualified to run. “If a judge has performed well, it is not very likely that an attorney is going to go to all the energy and expense to run against that judge,” said retired state Supreme Court justice Faith Ireland. She said whether appointed or elected, sitting judges have been thoroughly vetted by state officials and bar associations, meaning that unless they made a ruling that is seen as particularly egregious or are embroiled in controversy, their legal colleagues aren’t going to challenge them.

Maintaining the status quo is not necessarily bad, said Seattle University political science instructor Patrick Schoettmer. “When judges don’t have to worry about elections, they have more latitude to rule the way they think is best, rather than the way they think voters want them to rule,” he said. “When there are elections, judges tend to sentence more harshly to prove they’re tough on crime.”

But, Schoettmer added, the flip side is that uncontested elections defeat the purpose of holding elections at all. “If races are not being contested it reduces accountability of the judge, which is what the election is supposed to introduce.”

Ireland, Villeneuve and Schoettmer agree, however, that the race between incumbent Justice Steven Gonzalez and Nathan Choi illustrates that a contested race is not inherently a good thing.

Washington’s top-two primary system, in which the two candidates with the most votes move on to the general election, opens the door for potentially unqualified challengers winning these elections. “If you’re having uncontested elections in our top two system, you can default to having whatever yahoo who happens to qualify get on the ballot,” said Schoettmer.

The system is not without fail safes – two disbarred attorneys were deemed ineligible to run for state Supreme Court and dropped from the ballot this year.

Yet, those safeguards can only go so far. The editorial boards of the Seattle Times, Yakima Herald, Columbian, for instance, have argued that the race between Gonzalez and Choi presents an easy choice. Gonzalez is rated “exceptionally well qualified” by 11 Washington bar associations and endorsed by nearly 100 newspapers, unions and politic organizations. Choi did not seek bar association ratings, has no endorsements listed and his campaign website touts conspiracy theories about 9/11, the sinking of the Titanic and the John F. Kennedy assassination.

Despite that, an early poll of likely voters commissioned by Northwest Progressive Institute found Choi had a 6 percent lead over Gonzalez (with 74 percent undecided). Low information voters often default to the incumbent candidate, but Schoettmer explained they also often use criteria such as race, gender and even the sound of a name to decide. When Gonzalez ran for Supreme Court in 2012, his opponent Bruce Danielson won 42 percent of the vote without raising any money or doing any campaigning.

The fix lies in an overhaul of the existing system.

In the near term, Northwest Progressive Institute’s Villeneuve said it would help to see Washington’s political operatives and news outlets pay more attention to judicial races. But, ultimately, he would like to see an end of the state’s judicial elections. Many judges and justices are already appointed by the governor when their predecessor retires from the bench, dies or, in the case of state Supreme Court justices, hits the 75-year-old age limit before the end of their four or six year term. When appointed by the governor, judges and justices must then run for reelection at the end of their predecessor’s term.

“In most, if not all cases the governor is making good picks and the people getting elevated to the bench are well vetted,” said Villeneuve. He thinks moving to a system of gubernatorial appointment with the requirement that judges/justices be required to run for retention at the end of each term would solve a lot of the problems of the current system. Typically in such a system, if a judge were to be voted out by the people, their replacement would be decided with an open election.

Four states use appointments by governor or state legislature to seat the judiciary. Another 26 use an advisory board to decide appointments.

Another idea, he said, is to have judge/justice appointments with term limits. “It takes the politics out of it. Judges don’t have to worry about pleasing the public, but you create a constant churn where you’re breathing some new life onto the bench every few years to keep the legal discourse fresh.”

Former justice Ireland sees the ups and downs of both election and appointment. But to her mind, the most valuable piece of the electoral system is it requires judges to go out and meet with the people in their districts. “I don’t know if that benefits the electorate as much as it benefits the judge. Getting out and actually meeting with the voters and understanding concerns of the various constituencies is the number one benefit of electing judges.”

Whether they support election or appointment, all the experts who spoke to Crosscut agree that the judiciary deserves more spotlight because of the important and consequential role it plays.

Schoettmer explained that the most important reason to have a good judiciary is that sitting judges rely heavily on precedent. And though courts occasionally overturn precedent or tweak it, they typically try to build on previous rulings.

As such, he said, "The potential for a less than ideal judge leading the court off in a direction that might not be promoting the normative justice we seek in our society could have lingering impacts long after the judge has left the bench.”