They're Libertarian, and here's why it matters. 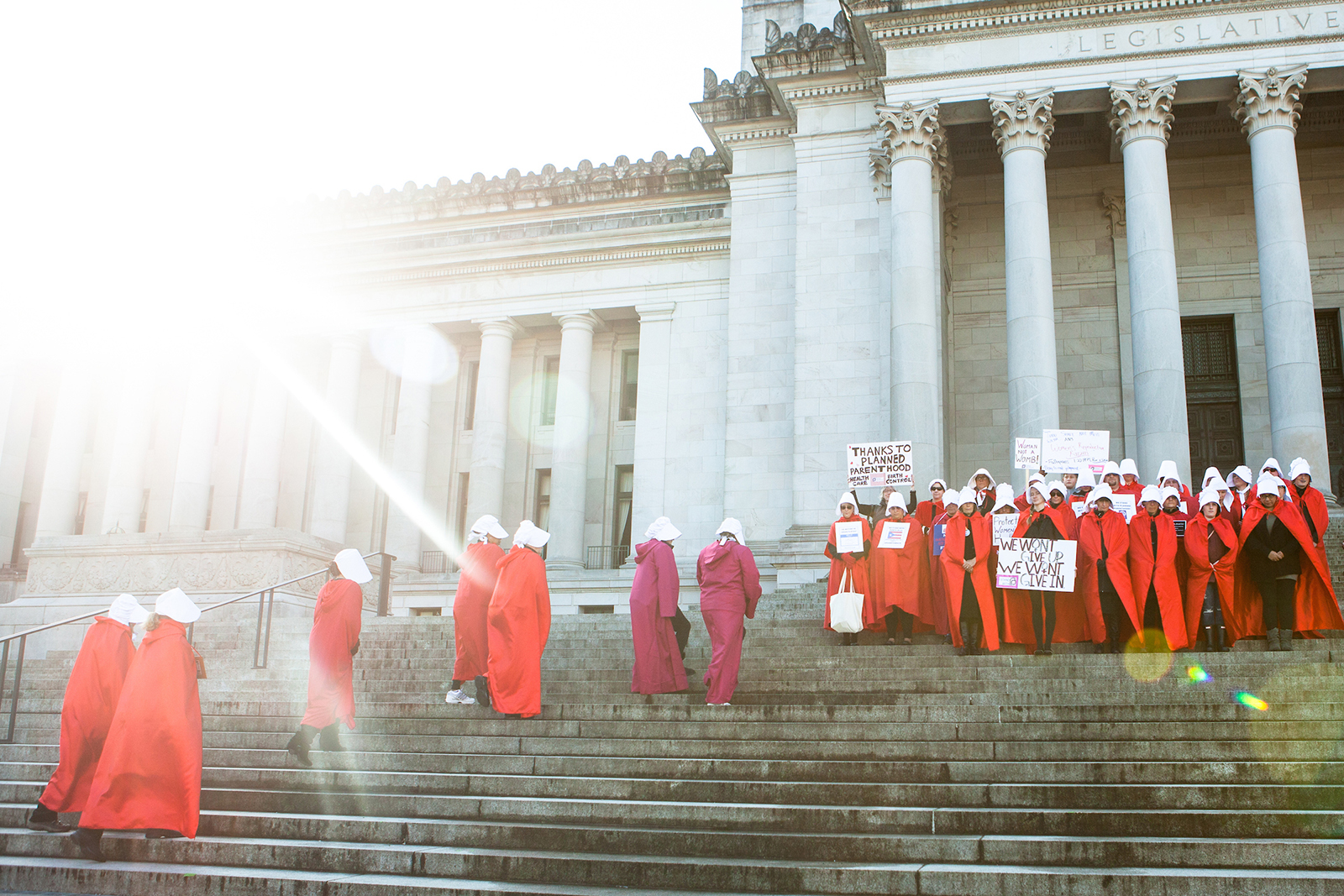 Protestors with the event 50 Handmaids in 50 States dress in the robes of Gilead at the Washington State Capitol, Oct. 14, 2017. Handmaids circle the Capitol in pairs before coming together on the steps. (Photo by Shauna Bittle for Crosscut)

Don’t worry, this is not another analysis of the midterm election. Everyone knows the Democrats did well nationally and even better locally, with one glaring exception that has future implications — the loss of Initiative 1631, which fell hard by 13 percentage points.  The “pollution fee” or “carbon tax” (translation: huge gasoline tax) was about as popular as a mosquito on your arm during a summertime barbecue.

Danny Westneat wrote a good column in The Seattle Times suggesting that the rejection of I-1631 could be our state frowning once again at new taxes or maybe revealing a bit of green hypocrisy. There is evidence of both. And, of course, the initiative came under fire on a number of fronts for simply being a poor value for the taxes it would impose.

But I think there’s another reason. People assume that Washington voters, because they’ve been supporting Democrats for president for 30 years and for governor even longer, are liberal voters. They are not. They are libertarian and they’ve been that way for a while, even when displaying both conservative and liberal streaks — sometimes in the same election. It explains both the midterms and how Democrats, if not cautious, can fumble away their healthy majority in Olympia (or consequently, how the Republicans can recover).

Take a look at the past 30 years, or even longer. Time and again, through initiatives or referendums, Washington voters have said no to income taxes, whether packaged as add-ons or as reforms to the existing system. They’ve occasionally trimmed or repealed taxes (the inheritance tax back in ’81), and have insisted, over and over, on supermajorities to raise taxes. When the “Children’s Initiative” was proposed to raise the sales tax for children’s programs back in ‘89, polls showed a close call. Um, no. It lost 2-1.

They’ve also demanded accountability and transparency in government, decades before everyone started talking about accountability and transparency — an issue that sometimes brings left, right and center together (especially if they work outside the state Capitol). In 1972, the immensely popular I-276 changed the culture of state government (and soon everywhere else in Washington) by allowing public access to government records and the records of campaign donations, while requiring lobbyists and candidates to report their expenditures to a new Public Disclosure Commission. Essentially it gave citizens the right to know who gave, who got, and how much. Performance audits, one of the few Tim Eyman initiatives to receive widespread support in the media, passed easily in 2005, after being blocked for decades in the Legislature.

And the voters have a conservative streak on issues like crime, passing America’s first “Three Strikes” law in 1993 (disclosure: I co-authored the measure, coined the term and led the campaign for its passage), and also passed the death penalty for aggravated murder in ’75 (which is the basis of the law, revised in 1981, that the state Supreme Court just struck down).

But on a host of social issues, where libertarians and progressives merge, our state’s voters not only vote liberal, they sometimes lead the country. Three years before Roe vs. Wade, Washington voters passed Referendum 20, liberalizing abortion. (Interestingly, the legislative battle lines on that issue in the Capitol historically split less along partisan lines than religion, with opposition from pro-life Roman Catholic Democrats, like West Seattle state Sen. Bob Greive, and support from pro-choice protestant Republicans, like north Seattle state Sen. Joel Pritchard, later a member of Congress. Voters further liberalized abortion 21 years later with I-120, though it was a much closer call.

On weed, voters said yes to medical marijuana in ’98, then went full Cheech and Chong with I-502 in 2012. Voters said yes to assisted suicide (aid in dying) in 2005, after rejecting the idea in the 1990s. Ditto with privatized liquor sales in 2011. We often hear that Washington voters are famously unchurched compared with folks in other states, and way back in 1966 they were going to the polls to repeal blue laws, requiring many stores to close on Sundays. On marriage equality, voters ratified same sex marriage with their vote on Referendum 74 in 2012, three years before the Supreme Court declared it a constitutional right.

Progressives might think they broke new ground in 2016 by raising the state minimum wage 43 percent, from $9.47 to $13.50, by 2020. But an even more audacious initiative raised it 85 percent, from $2.30 to $4.25, in 1988. What’s often regarded as new is really an updated or recycled idea from an earlier generation. Is a higher minimum wage really a libertarian idea? Well, many libertarians oppose minimum wages of any kind, but others see higher wages for the working poor as a smart alternative to government welfare programs.

Conservatives might wonder why they can’t elect a Republican governor here, given the voters fiscal conservatism at the polls (after all, they’ve been running superb candidates in the past four elections). But the safety valve of the initiative process explains why voters feel comfortable electing Democrats to run the joint. If Gov. Jay Inslee tries to pass an energy tax to grow the government and reward political donors in the guise of environmental reform, voters know they can slap it down. That spares them from voting for a Republican, who they might oppose on the social issues.

Why doesn’t it work in reverse: Why don’t libertarian voters feel comfortable voting for an “R” when they know they could repeal an attempt to end aid-in-dying or abortion subsidies with a November ballot measure? Because social issues have a much stronger emotional pull with voters than fiscal ones, creating a comfort level with Democratic candidates. Consider that the abortion issue has been settled in Washington for decades. Yet without fail Democrats bring it up every campaign cycle because they know it matters, if not substantively, then symbolically. It unites their base, appeals to most independents, and divides Republicans. And that’s a recipe for winning.

The danger for Democrats in Olympia now is lapsing from liberal into left wing, which we’ve witnessed with great clarity in Seattle for the past five years. If that happens in Olympia, the anvil currently resting on the head of Republicans will fall on the Democrats.

The lesson for Republicans is to highlight Seattle-style extremism when it happens (and it will, at least in legislative committees), and propose a taxpayer-friendly agenda that draws people’s attention away from what’s happening in the “other” Washington. Not easy, but absolutely necessary to reverse their current fortunes