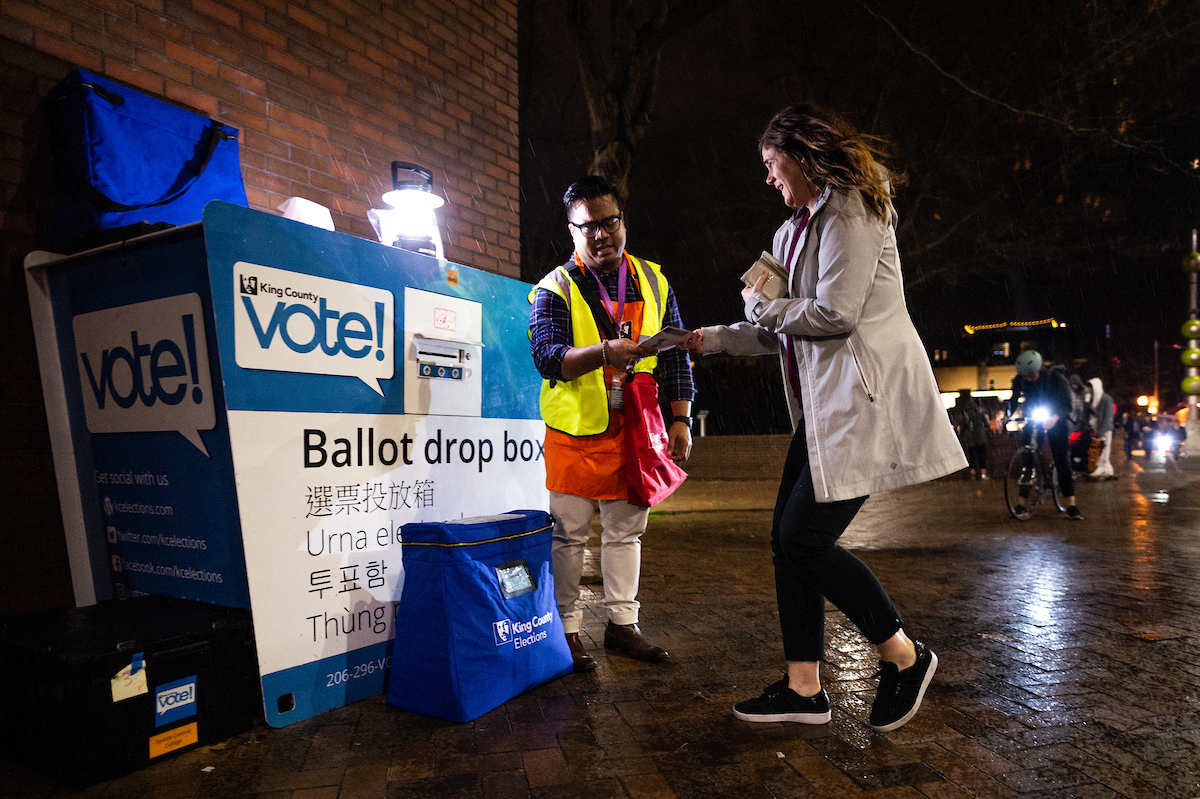 The last voters on Capitol Hill rushed to the ballot box outside of Seattle Central College before the 8:00pm deadline. (Photo by Caean Couto for Crosscut)

As the national debate on the affordability of higher education continues, Mayor Durkan said Tuesday, “I think this is one of the best things we can do to invest in a more equitable and affordable city."

The levy replaces two previous measures — for preschool and education programs — that both expire this year and will necessitate an increase in property taxes, from 22.7 cents per $1,000 in assessed value in 2018 to 36.5 cents in 2019. That translates to about $9 extra a month on a median priced house in Seattle. Seniors, veterans and low-income households will be exempted from the property tax.

Durkan said she was “mindful” of the sting of property taxes, but said, “We wanted to make sure that we could make the case that this investment is worth it for Seattle.” She pledged accountability going forward.

And it will enable the expansion of the Seattle Preschool Program, increasing the number of 3- and 4-year-old children it serves annually from 1,500 to 2,500.

A celebratory Durkan concluded, “This is a game changer for so many families.”

A statewide ban on taxing food items, put to voters in response to Seattle’s soda tax, is on its way to passing. Billed as a ban on “grocery taxes,” the measure was bankrolled by large soda companies.

In reality, most grocery items are already exempt from sales tax. No municipality in the state taxes the sale of food at grocery stores currently, but proponents argued Seattle’s tax showed local governments could pass taxes on groceries if they wanted to.

Of the $20.3 million in Yes on 1634 campaign contributions, more than $20 million comes from Coca-Cola, PepsiCo, Dr Pepper and Snapple.

Seattle’s tax will remain in place, however. Mayor Durkan said, “I think they carved us out, because if they hadn’t it would have failed.”

A measure to repeal highly restrictive language around prosecuting police officers in the state of Washington was poised for approval Tuesday, winning by nearly 20 points in the state's initial ballot drop.

In Washington state, it’s all but impossible to prosecute a police officer for shooting and killing someone. Why? The so-called “malice” clause, which says an officer can only be found liable for killing someone if they did so out of malice. If that sounds highly subjective and impossible to prove, it’s because it is. Over 200 people have been shot and killed by police in Washington 2005, but just one officer has been charged.

I-940’s passage is the culmination of years of work to strike the word from Washington state law. The move is unlikely to unleash a wave of new prosecutions, but will bring it closer to a more typical standard used in other states.

Additionally, officers will be required to undergo more crisis intervention training and to provide first aid at the earliest possible moment.