The Rose City's success suggests a way forward for its neighbors to the north — but Washington is not Oregon. 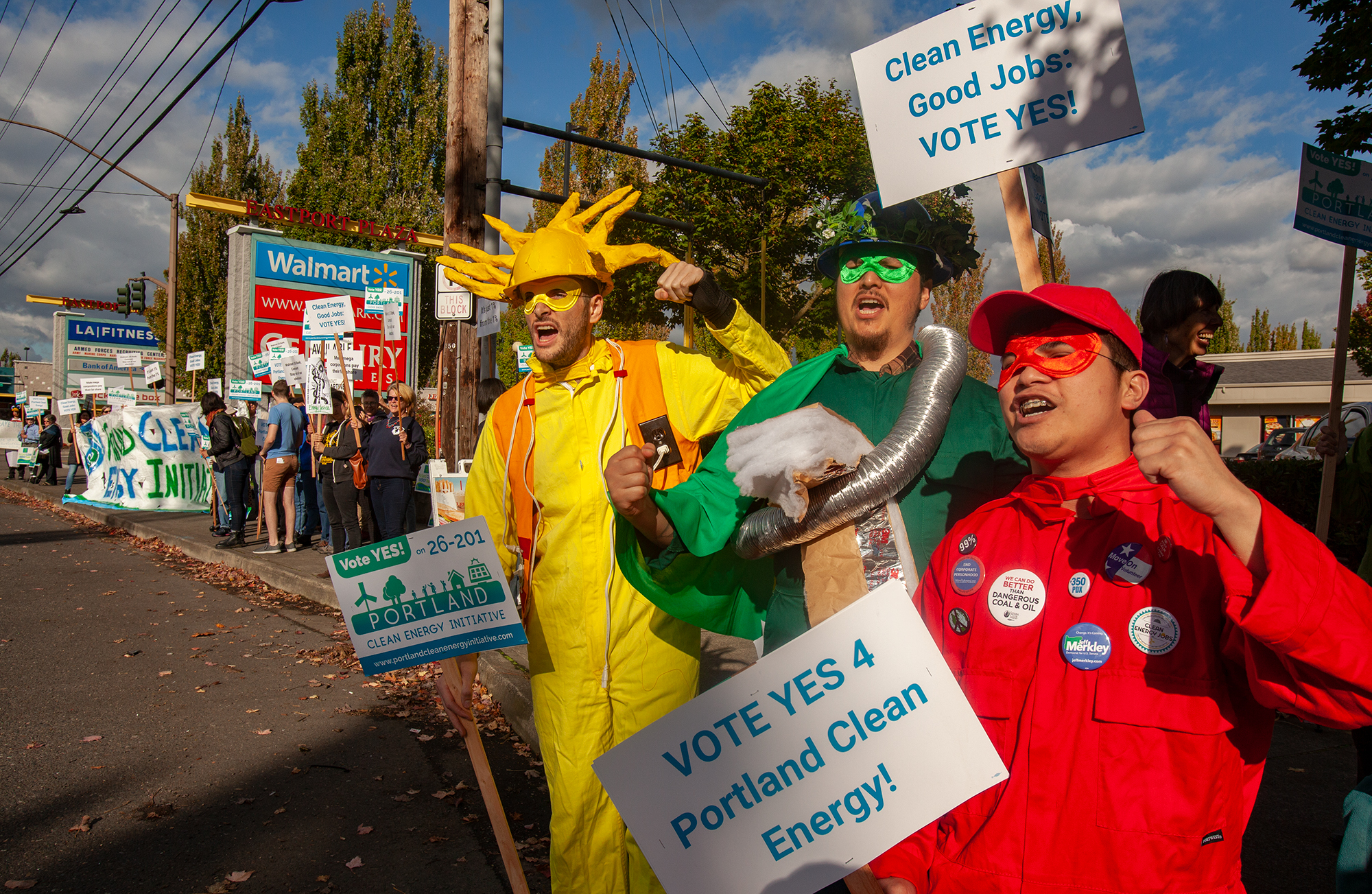 Supporters of the Portland Clean Energy Initiative rally in Portland on Tuesday, Oct. 9, 2018. (Photo by Rick Rappaport for Crosscut)

Election night in Seattle delivered a familiar result for environmental advocates. Early results for Initiative 1631, driven by urban King County, were positive and met with shouts of elation. But as more counties chimed in, the mood in the room quickly soured. Despite unprecedented big-money support and favorable polling, the latest attempt to rein in carbon emitters throughout the state had failed, again.

“It was not the nail biter we were expecting,” said Jill Mangaliman, executive director of Got Green, a grassroots South Seattle organization that supported the fee. “But we knew [we had] major opponents.”

It was a very different scene 160 miles south in Portland, where the celebration was just getting started as the city passed what supporters have called the first clean energy fund for climate justice in the nation. Quickly the focus of environmental advocates turned to the victory in Oregon. 350.org head Bill McKibben congratulated them from the sidelines, tweeting a momentous, “Whoa!”

During the party to celebrate the win, advocacy director of Coalition of Communities of Color Jenny Lee told the Portland Tribune, “I do think it's going to be a model [in the rest of the country]. It's going to be up to local, on-the-ground organizing to come up with our climate future."

It wasn’t the first time. The carbon fee didn’t fare much better than its predecessor — 41 percent of Washington voters wanted to approve the 2016 carbon tax and 43 percent voted for this year’s carbon fee. The number hasn’t budged too much. So what’s next for I-1631 supporters?

The state Legislature offers one avenue. Although a carbon tax bill failed to make it through the state Senate earlier this year, Democratic gains in the Legislature after the elections have proponents hoping that the lawmakers will do what the electorate would not and pass a similar bill. Yet, given the track record of such legislation in the state, there are no guarantees.

The successful Portland initiative does not provide a path forward for proponents of a carbon tax or fee, but it does show another way to possibly achieve another aspect of I-1631: funding green projects. Portland Ballot Measure 26-201 — also known as the Portland Clean Energy Initiative — was similar to the carbon fee in this respect. Backed by a diverse coalition, that initiative proposed a tax on retail businesses to fund “clean energy and clean energy jobs” with a focus on low-income communities and communities of color “who are most impacted by climate change.”

Another big difference between the two measures? Measure 26-201 is limited to Portland alone.

“We knew that we had a much better chance by limiting the scope,” says Khanh Pham, manager of immigrant organizing at the Asian Pacific American Network of Oregon, a member group of the coalition supporting the initiative.

Even then, she says, the coalition was “by no means confident” of the initiative’s passage. As with Washington’s initiative, they faced heavy opposition. The carbon fee was opposed by wealthy oil giants to the tune of $31 million. The Portland Clean Energy Initiative ran up against opposition from organizations like the Portland Business Alliance with out-of-state funds from large entities, including Amazon and Target.

While Pham says that this initiative doesn’t have the impact of a statewide effort, it was a necessary first step.

“In a time when the federal government is rolling back environmental policy,” she says, “Portland could show climate justice [to the nation].”

Targeting urban areas with climate change legislation makes sense. It's worked before, in Boulder, Colorado, when the Berkeley of the Rockies passed the nation’s first tax dedicated to fighting climate change in 2007. A look at the county-by-county tally of the I-1631 vote shows a sharp divide between rural and urban counties.

Still, Washington is not Oregon, or Colorado. Greg Wong at Pacifica Law Group, who helped draft Washington’s carbon fee initiative, says that it’s questionable whether a Washington city could duplicate Portland’s initiative. Taxing retail businesses the way that initiative does could be a nonstarter.

But what about a municipal or countywide carbon tax? Wong says it’s not a question that has been explored, pointing out that any legal restrictions would depend on the details of the proposal.

“Certainly it seems to me that at least the carbon fee initiative had very strong support in certain pockets of the state,” Wong says. “So maybe it’s something that those local entities should consider.”

Yet, Rob Williams, an analyst for Resources for the Future, warns that any such tax might be subject to the concept of “carbon leakage,”  which would result in emitters moving out of an area of taxation. It’s an argument similar to one made by opponents the Seattle head tax earlier this year.

Jill Mangaliman with Got Green hopes that Seattle can look to Portland for inspiration as they and other supporters of the carbon initiative consider next steps.

“There’s some strong organizing out there,” Mangaliman says. As for the coalition behind the carbon fee, “Folks are in it for the long haul. We’re going to regroup and keep going.”